By, Saif Shain At Outlook

Rishi Sunak is the latest poster boy for Indian success stories abroad. The chancellor of the exchequer until recently, he could well become Britain’s next prime minister. He and his parents featured in a 2001 BBC documentary series about the middle classes. Sunak, who had been educated at the prestigious Winchester College, bragged on camera he had friends among the British aristocracy and upper class — but, he stressed, “not working class”.

In the two decades since that interview — whose clips are currently doing the rounds on Twitter and TikTok — Sunak has assiduously maintained his select company. After graduating from Oxford and Stanford universities, he advised investment banks and hedge funds before becoming a Member of Parliament from the “safe” Conservative Party seat of Richmond in Northern Yorkshire. Somewhere in between, he also got married to the daughter of Infosys founder NR Narayana Murthy. The couple are counted among Britain’s richest people today.

Sunak is among a clutch of political figures of Indian origin who have recently risen to prominence in the West. These include British home secretary Priti Patel, US ex-governors and presidential hopefuls Nikki Haley and Bobby Jindal and, most notably, US Vice President Kamala Harris. Their ascent is viewed either as epitomizing the intelligence and industry of Indians that makes them stand out everywhere — or as evidence of the prospects inherent in “inclusive” Western societies, which enable immigrants and people of color to achieve their potential. But as Sunak’s story suggests, the truth is quite the opposite.

The newfound success of Indians reflects how the opportunity structure of Western liberal democracies rewards the privileged and the powerful — or those who serve their interests. At the same time, it illustrates how the politics of identity is abused to undermine any possibility of change.

The families of many of these political prodigies moved to the US or the UK in the 1950s and 1960s. This was a time of upheaval in both countries, which forced them to relax their immigration laws — although for different reasons. Britain, no longer the colonial power it used to be, needed more people from erstwhile colonies to rebuild after the Second World War. The US not only faced the challenge of the Cold War but also growing domestic discontent in the form of Black Americans taking to the streets to demand equal rights. A 1965 US law overturned several provisions that had curtailed immigration from non-European countries. Ostensibly meant to showcase the US as the land of the free, the new policy insidiously encouraged the expansion of non-Black minorities as a means of containing the civil rights movement.

It went hand-in-hand with a concerted campaign to typecast East Asian immigrants as the “model minority”. Soon after the immigration act was passed, the New York Times published an article praising Japanese Americans for achieving great success, measured in terms of higher education and low crime rates and contrasted directly with the failures of the ”problem minority”, viz. Blacks. Similar eulogies were sung for the Chinese Americans.

Virtually overnight, the same East Asians who had been regarded for more than a century as the “yellow peril” morphed into pliant, law-abiding, productive members of society who ought to serve as an exemplar for other minorities. The purpose behind the model minority stereotype was to discredit the demands of the civil rights movement by blaming Black Americans for all their suffering — whitewashing the history of slavery and segregation. The tag also served to divide minority groups and derail the possibility of multi-ethnic mobilisation.

Sixty years later, as the US simmers with chants of Black Lives Matter and China’s rise as a global power has once more transformed East Asians into the yellow peril, it is Indians who have emerged as the new model minority.

They do meet the requisite criteria. Nearly 79 percent of Indian Americans aged 25 or over have a bachelor’s degree, compared with just 33 percent on average for other communities, according to the 2019 census. Indians are also more likely to be employed than others and typically work in high-paying sectors. As a result, Indian households had a median income of $132,000, more than double the median for other immigrant groups combined.

These statistics are touted as proof that hard work can lead anyone to success in the US — the quintessence of the so-called American Dream. As Haley once said, “We’re just good at being Americans.”

But the figures hide more than they reveal. Comparing Indians and other communities is much like comparing proverbial apples and oranges. Many Indians in the US come from privileged sections of Indian society or the Indian diaspora. The vast majority have arrived in recent years. And they have migrated by choice, typically to take up plum jobs in management, business, science and technology, and the like — or to study and then take up plum jobs in these sectors.

This history is quite different from, say, the centuries of systematic persecution experienced by Black Americans initially brought to the US as slaves from Africa or the genocide that Native Americans had to live through. Talking about Jindal or Haley or Harris’s success as though it is exclusively Indian also disregards the progress on civil rights made possible by the political struggles of other minorities — struggles that Indians did not participate in but benefit from today.

This is not to suggest that Indian Americans do not experience prejudice — they do, and it is on the rise by all accounts. Nor does it imply that Indians do not work hard or do not deserve their success. But the glowing achievements of an already well-to-do community are mobilised to shade the injustices that other minorities are speaking out against. One moneyed Indian political figure after another, belonging to one mainstream political party or the other, is unveiled as an acceptable alternative to the uncomfortable politics of protest and grassroots mobilisation that Black Lives Matter represents.

Education, income and a general unwillingness to cause “trouble” even when dealing with racist violence has allowed Indians in the US to take on the mantle of the new model minority — especially at this moment of renewed racial angst that bears parallels with the civil rights era. A similar shift has occurred in Britain too, where Hindus and Sikhs are now regarded as part of the “middle classes” — in other words, the mainstream of British society.

The policy positions of these Indian politicians give the lie to claims that their rise somehow represents the cause of inclusivity and social justice. As governor of Louisiana, Jindal cut taxes on business investments while making it harder for the poor to receive healthcare. Haley, a fellow Republican, has supported the flying of racist Confederate flags. Meanwhile, Harris, a Democrat, fought to ensure more and more people — many of whom tend to be Black or other minorities — remained inside privately owned prisons while serving as attorney general of California.

The hypocrisy of these political leaders who hail from immigrant families is perhaps most evident when it comes to immigration policy. Jindal and Haley have supported a slew of laws that make immigration to the US difficult and the life of immigrants harder. While touring Latin American countries as vice president, Harris told would-be migrants, “Do not come. Do not come.” Across the pond, Patel is widely regarded as imposing a ruthless regime against immigrants and asylum seekers, especially during the Covid19 pandemic — bordering on illegality and termed by a judge as “extremely troubling”.

While champions of identity politics might celebrate the ascendance of Sunak and his ilk to the upper echelons of power in Western capitals, the success of these “different-looking” individuals is unlikely to make any difference. If anything, it shores up power and privilege within these liberal democracies. It also illustrates the emptiness of the liberal promise of representation, which barters the struggle for social change with the success of a few individuals who pride themselves in having no working-class friends. 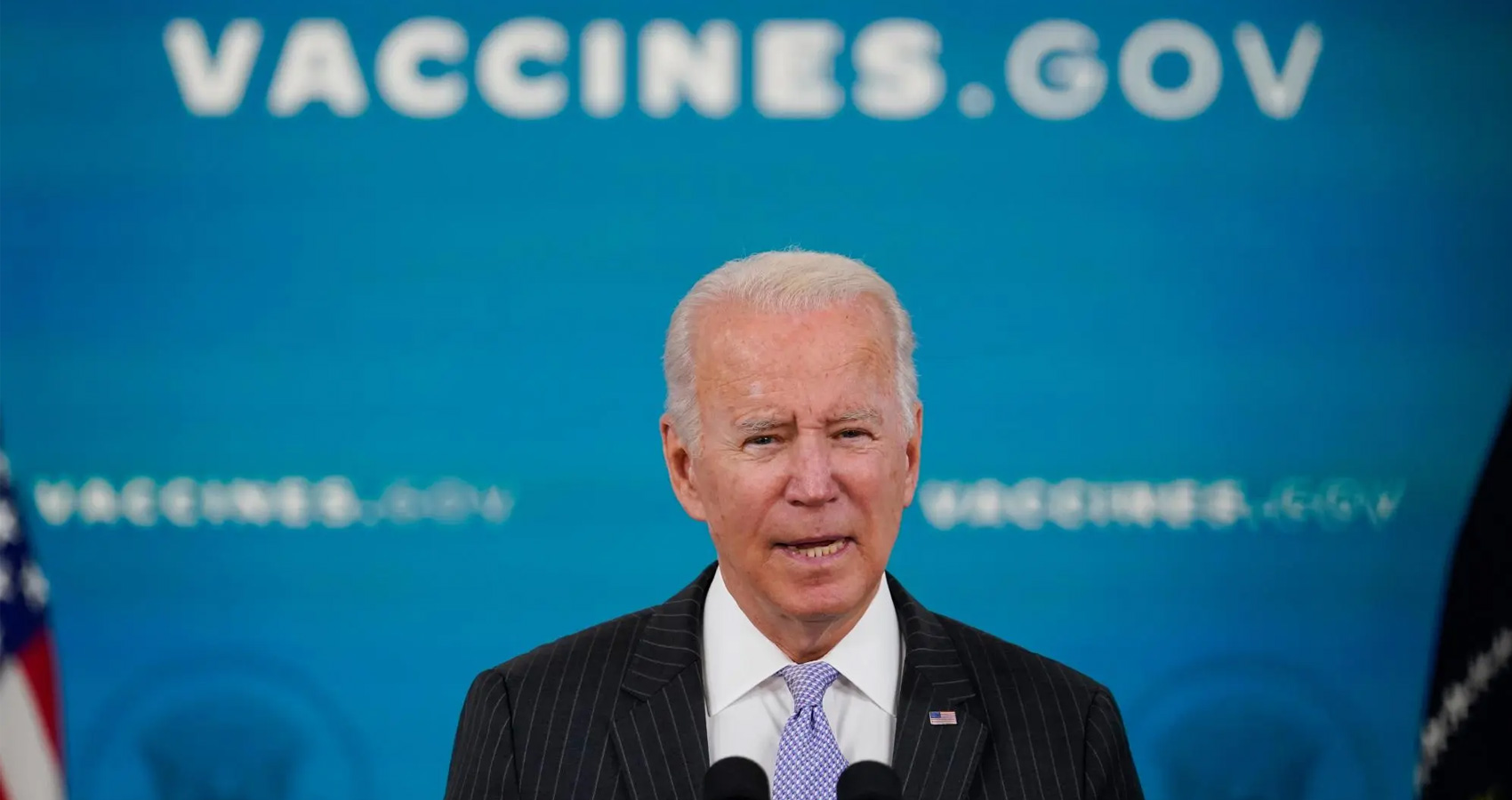 US President Joe Biden has called the Omicron Covid variant a “cause for concern, not a cause for panic” one day after it was detected in North America.

Cases have been found in Canada, and his speech from the White House comes as US travel bans on eight African countries takes effect. Biden also urged people to get a booster and to wear masks.

He said he does not anticipate any further US travel restrictions or lockdowns at this time.

In remarks on Monday, the president called it “almost inevitable” that the Omicron strain, first reported by South Africa, will be found in the US “at some point”. He added that said vaccine companies are creating “contingency plans” for new vaccines “if needed”. 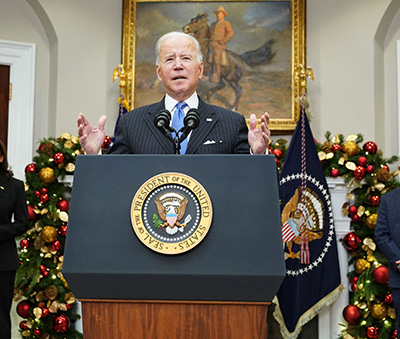 Late last week, the US announced a ban on flights from South Africa, Botswana, Zimbabwe, Namibia, Lesotho, Eswatini, Mozambique and Malawi. Canada, the UK and the EU and other countries have also restricted travel from southern Africa.

In his remarks, Mr Biden said that the ban had bought some time for the US to study the new strain. While the World Health Organization has deemed Omicron a “variant of concern”, it is still not clear whether it is associated with more transmission or more risk of evading vaccines.

“We have the best vaccine in the world, and the best medicines, the best scientist and we’re learning more every single day,” the president said. He also vowed to “fight this variant with scientific and knowledgeable actions and speed. Not chaos and confusion”.

He praised the scientific community of South Africa for reporting the strain, despite criticism that travel bans are being used to punish the country.

“To their credit, the scientific community in South Africa quickly notified the world of the emergence of this new variant,” Mr Biden said. “This kind of transparency is to be encouraged and applauded because it increases our ability to respond quickly to any new threats, and that’s exactly what we did.”

He also said he was directing the US Food and Drug Administration, which regulates vaccines, to use the “fastest process available without cutting any corners” to approve any potential new vaccines that specifically target Omicron.

Canada, the US neighbour to the north, said on Sunday that the Omicron strain had been discovered in two patients who had recently travelled to Nigeria. A third case was announced on Monday.