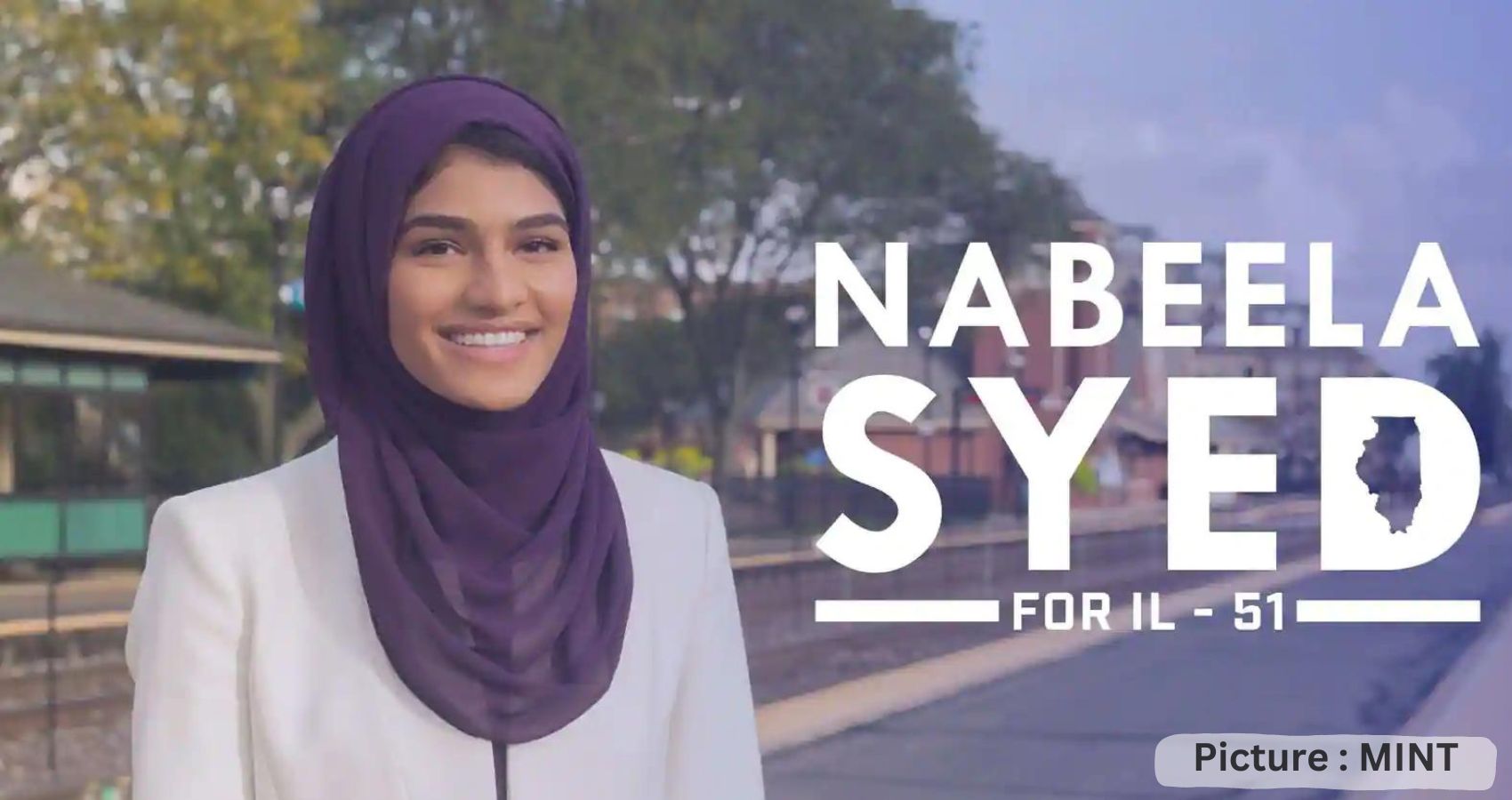 “My name is Nabeela Syed. I’m a 23-year-old Muslim, Indian-American woman,” she announced in a tweet on Wednesday.

She added: “And in January, I’ll be the youngest member of the Illinois General Assembly.”

And as it invariably happens with these path-breakers, she has notched a few more firsts along the way: first Indian-American elected to the Illinois state House — man or woman of any faith — and along with Palestinian-American Abdel Nasser Rashid, the first Muslim elected to the state legislature.

Syed wears a hijab, and some publications noted it.

Kesha Ram, who is now serving in the Vermont state Senate, probably holds the record for being the youngest Indian-American ever elected to a state legislature. She was only 21 when she was elected to the state’s legislative body. She ran unsuccessfully for Lt. Governor in 2016. She belongs to the family of Sir Ganga Ram, the builder of modern Lahore who has a Delhi hospital named after him.

Syed was born in Illinois, but not much else could be ascertained about her family, other than that her parents, or one of them at least came from India.

Syed’s campaign website says she graduated from the University of California, Berkeley, with a degree in political science and business administration, where she served as the President of a pro-bono consulting organisation assisting local businesses and non-profits.

“It doesn’t seem real, but I am a state representative-elect now and I will be the youngest member of the General Assembly,” she told ABC News.

The 2022 midterm will go down in history as responsible for giving the US the first Generation Z member of the US Congress — Maxwell Alejandro Frost, a 25-year-old Democrat elected to the House of Representatives from Florida. President Joe Biden joined the national celebration of his election by congratulating him in a phone call.

Syed frames her election as part of this effort by youngsters to claim their place in politics, rather than wait for their turn, euphemism for waiting for someone to retire.

“People say wait your turn or there is no space for you. We made space,” she added. (IANS)

The “abrupt and unheralded change” in India’s stand on the Russian invasion of Ukraine, as reflected in Prime Minister Narendra Modi’s “public rebuke” of Russian President Vladimir Putin earlier this week, has been heard in official Washington DC with some relief and satisfaction.

Prime Minister Modi made it “clear to Putin’s face that the invasion is wrong”, said Ro Khanna, an Indian American lawmaker who has been critical of India’s refusal to condemn the invasion. Speaking at a community event on Wednesday, he went on to suggest Modi could also help in a “peaceful resolution and a ceasefire”.

Earlier the same day in New York, a senior White House official pointed to the new Indian position as testimony to the Biden administration’s strategy of just laying out the facts on Ukraine for other countries to see and judge for themselves instead of forcing them to change their stand.

“The US strategy has borne fruit insofar as you are seeing increasing signs of countries that did abstain, to include countries like India speaking out in a different way, including directly in front of Putin,” the official said. “And, you know, we’d like to see more than that, obviously, in the days ahead.”

India was among 34 countries that abstained in an UN general assembly vote in March that deplored Russia for invading Ukraine. China had also abstained.

New Delhi came under significant pressure from the US and its western allies to condemn the invasion and either stop buying Russian oil or not ramp it up, as it would enable Moscow to withstand the economic sanctions imposed on it to force it to end the war and leave Ukraine.

India did neither. Until last week. “Today’s era is not of war,” Prime Minister Modi told Putin in public remarks ahead of their bilateral meeting on the sidelines of the Shanghai Cooperation Organization’s meeting in Samarkand, Uzbekistan. That went much further than India’s expression of ‘grave concern’ over the killing of civilians in Ukraine’s Bucha, and call for respecting the UN charter that protects the sovereignty and integrity of all member nations.

US frustration with India’s refusal to condemn Russia and stop oil from it, had led to a rather unfortunate outburst from a senior White House official sent to New Delhi for these talks. He had warned India of “consequences”.

“I’ve been clear about India, and I think India ought to be condemning Putin and India ought not to be getting oil from Russia or China. We ought to rally the world to isolate Putin,” Khanna said on Fox News in days after the UN general assembly vote.

Khanna had gone on to say that it was time for India to choose between the US and Russia. “First, India should condemn Putin in the UN for the blatant human rights violations. Second, they need to realise, they have to pick sides,” he said, adding, “We, the United States, were with them when China invaded India. Putin wasn’t there. And it’s time for them to buy weapons from the United States, not Russia. We’ve got to look at how we can facilitate that and make that easier. We need India as an ally ultimately to contain China.” (IANS)

Some ‘Indian Americans’ are switching to self-identifying themselves as ‘Hindu Americans’ and plan to announce the rebranded entity as a political force at a ‘summit’ on Capitol Hill, home to the US congress, late September to deliver their message directly to the lawmakers.

Titled ‘Hindu American Summit for Political Engagement’, the event will see the leadership of the “spirited American Hindu community discussing to actively engage in the US political system”, according to a flyer circulated by the organisers that also serves as an invitation.

But the rebranding effort actually reflects growing unease among Indian Americans with being tied to the policies and positions taken by the Indian government and to be seen by Americans as representing them. They also feel the need to assert their ‘Americanness’ while being still attached to their country of origin, by religion now and not politics.

The summit is being organised by ‘Americans 4 Hindus’ and the ‘American Hindus Coalition’, both unabashedly Hindu outfits, and it will be attended by representatives of the national, California and Texas units of the ‘Americans 4 Hindus’; the national, New York and Florida units of the ‘Hindu American PAC’ (political action committee); Hindus of Georgia PAC, Hindu PACT (World Hindu Council of America); Vishwa Hindu Parishad of America; Hindu Swayamsevak Sangh of America and few others.

As a measure of the seriousness of this rebranding effort, organisers have invited only bodies that have declared their religious identity overtly, with the word ‘Hindu’ in their names.

An event to commemorate 75 years of India’s Independence Day — observed by India as Azadi Ka Amrit Mahotsav — has been relegated to the footnote position in the summit flyer, as a sideshow, because, it is being hosted by the American Association of Physicians of Indian Origin (AAPI), which does not have the word ‘Hindu’ in the name but is a powerful entity nevertheless. It hosted Prime Minister Narendra Modi at its 2020 annual meet that was held virtually because of Covid-19.

Americans 4 (also calls itself ‘for’) Hindus raised $228,311 in the 2019-20 election cycle, according to Open Secrets, which tracks election funding in the US. Most of his money went to Republicans. The Hindu American PAC raised $55,833 in the same period and gave to both Republicans and Democrats.

“For half a century, Indian Americans have maintained strong loyalty with India but its recent diplomatic confrontations with the western countries is forcing us to rebrand ourselves as ‘Hindu Americans’, similar to the ‘Jewish Americans’,” said Shekhar Tiwari, chairman-founder of the American Hindu Coalition, which is co-hosting the summit.

“Unfortunately this change will create distance with India which might only grow with time,” he added. Though numerically a minority, such Indian/Hindu Americans, Jewish Americans wield enormous political clout, with both Republicans and Democrats. They have used this clout to also support Israel and insulate it from backlash to some of its most controversial actions.

India’s refusal to condemn the Russian invasion of Ukraine has been the cause of much disquiet among Indian Americans, many of whom have said they have had to bear the brunt of the backlash from Americans, especially lawmakers, casting doubts on their Americanness.

India is spoken of in the same breath as China as Russia’s enablers. The US media is closely tracking, and reporting, India’s continuing — albeit escalating — purchases of Russian oil and fertilisers, helping, in the view of Americans, Russia go around crippling sanctions imposed by western countries over the Ukraine invasion.

Sampat Shivangi, co-chair of Americans 4 Hindus, the other host of the summit, acknowledged that many Indian Americans want to switch to Hindu American, but insisted it’s a fierce debate at the moment and not a settled issue.

Though, Shivangi added, he sees not reason for Hindu Americans to not call themselves Hindu Americans like Jewish Americans, who have embraced their religious identity and not countries they came from.

Jewish Americans have long been a model for many Indian Americans, even those that do not want to cut ties to the mother country, for their clout in American politics, which is way disproportionate to their population size.

“We are the most highly educated and wealthiest community in America and we should not be reluctant to call ourselves Hindu Americans,” said Shivangi, arguing Hindus comprise 85 per cent of Indian Americans, who are estimated to be about 4 million. But, he added, he is happy to go with the name Indian American. These are not binary choices for him.

Shivangi is behind the Amrit Mahotsav event that follows the Hindu summit, and said he has commitments of attendance from several Senators and members of the House of Representatives. (IANS) 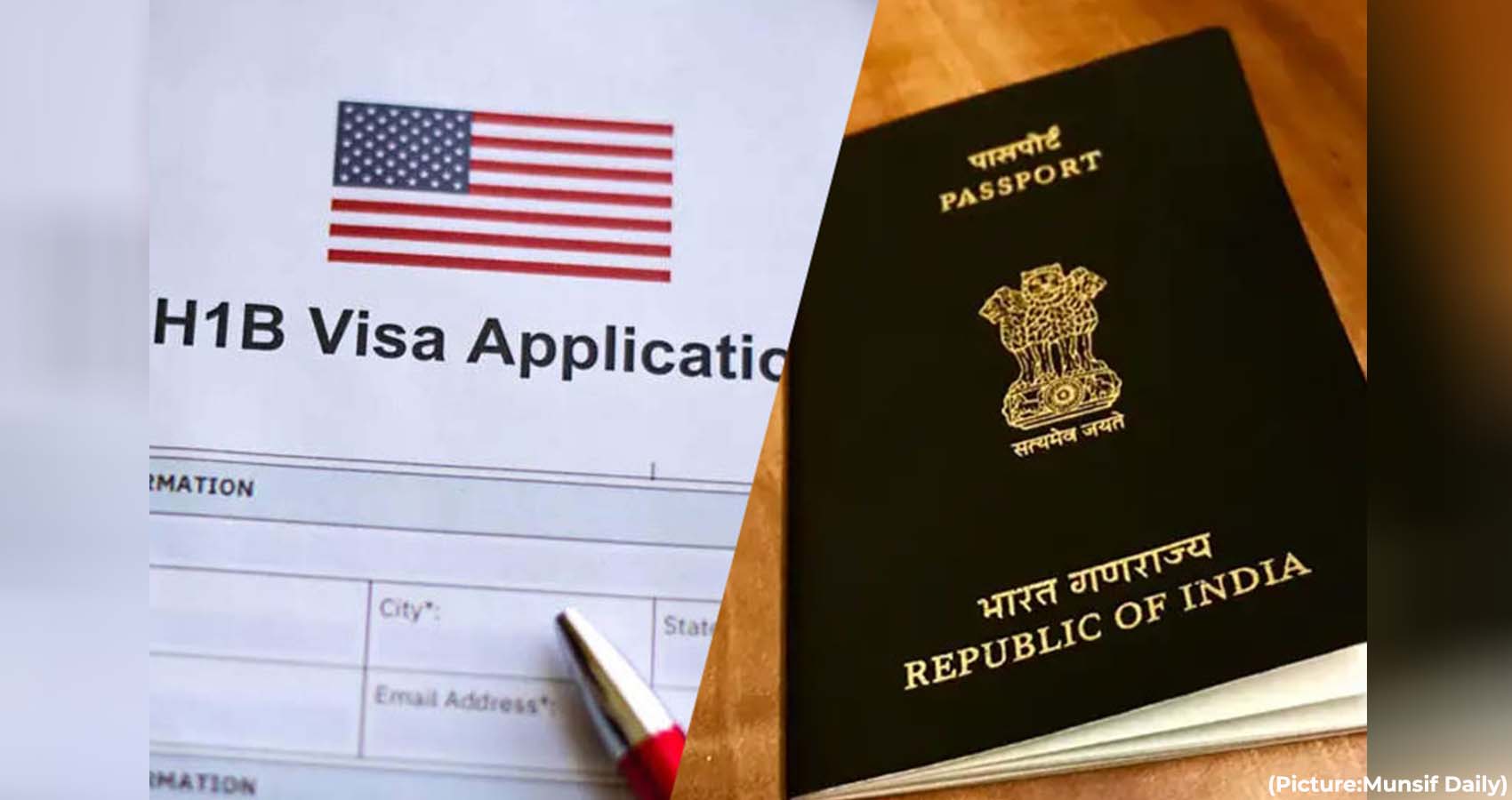 Indians cornered nearly three-fourths of H-1B visas issued by the US to speciality foreign workers in 2021, continuing their stranglehold on this highly sought after professional ticket to work, live and, finally, settle down in America. 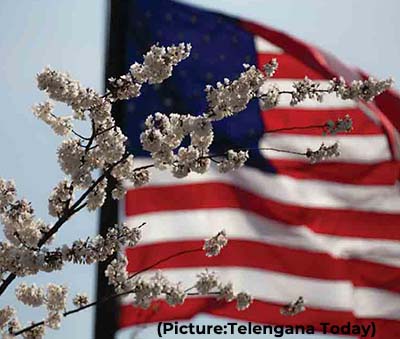 The US approved 407,071 H-1B petitions in 2021 and 301,616 of them 74.1 per cent were for Indian workers, according to the latest report on this topic released recently by the Department of Homeland Security, the government agency that oversees immigration.

Indians accounted for 74.9 per cent of the approved petitions in 2020. The US allows American employers to hire speciality foreign workers on H-1B for positions they are unable to fill with local Americans. Top American companies such as Microsoft, Amazon, Google, and Facebook are among leading users of this visa programme as are US subsidiaries of Indian IT companies such as Infosys, TCS and Wipro.

These foreign workers are hired either from their countries of birth or residence or from US colleges and universities Sundar Pichai, the Google CEO, was hired on H-1B when he was studying in the US. They can live and work here for three years and, if approved, another three years. A large number of them go on to Green Cards permanent residency sponsored by their employers.

Indians have had a tight grip on the H-B visa programme for years, at that three-fourths mark. People from China have been a distant second with 12.1 per cent. The next three were Canada with 0.9 per cent, South Korea also with 0.9 per cent and Philippines with 0.7 per cent. The line-up was the same in 2020, with almost the same numbers.