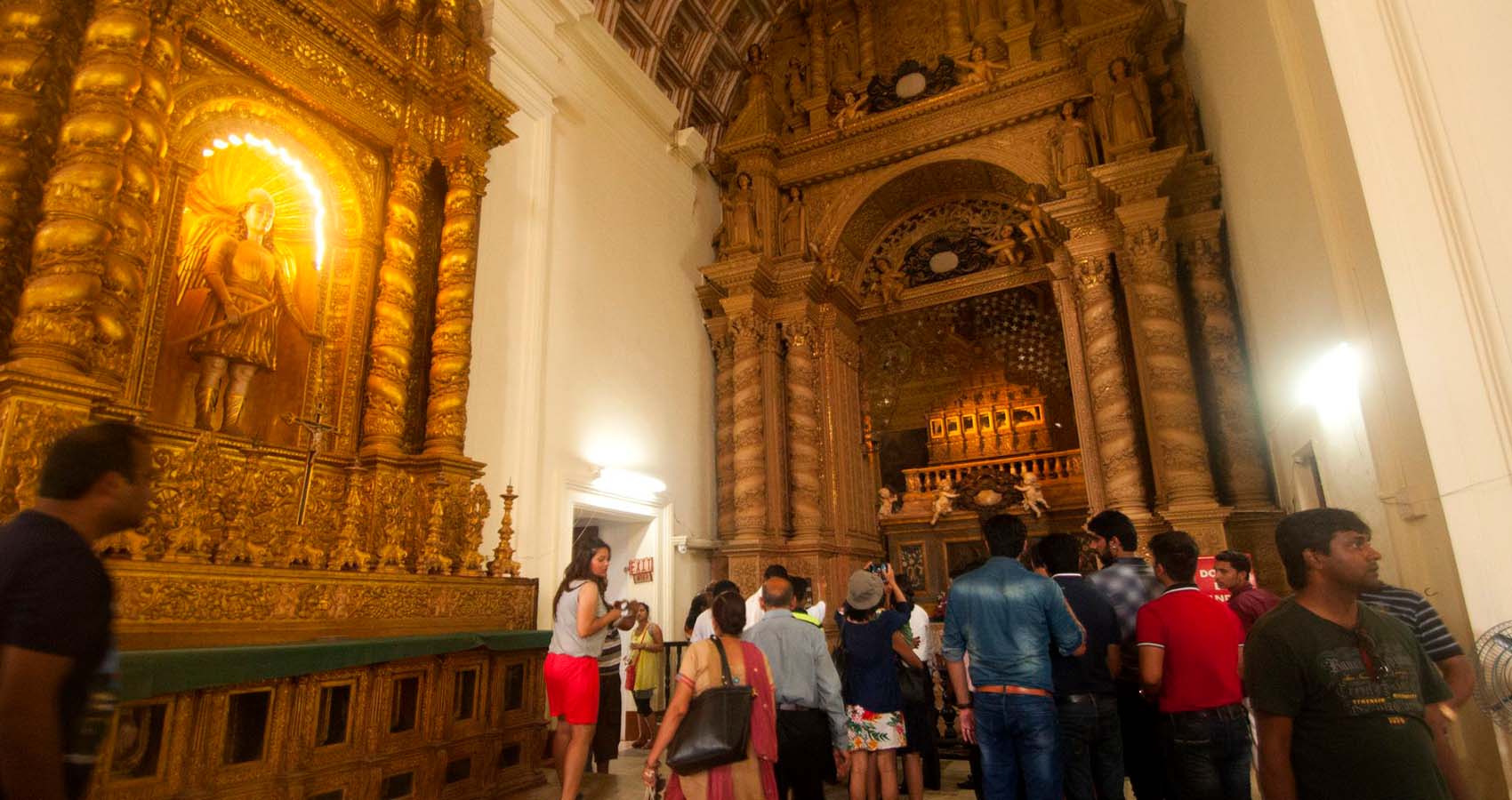 When Pune’s D.S. Pai visited Goa four years ago for an official conference, he took out time early one morning to visit his Kuldev, family deity, Ramnathi temple at Bandivade. “My colleagues were interested and came along with me. They said they did not even know of the existence of such a beautiful temple,” Pai, who is India Meteorological Department’s (IMD) head, Long-Range Forecast, told IANS on phone.

Pai’s family migrated to Kerala in the 17th century when the Portuguese took over Goa. Like him, several others chose to make Kerala their home, but almost all of them have retained ties with the family deity even now. The trips have increased since he was posted to Pune, he said.

Pai is not the only example. Not all visitors to this sunshine state go to the beach first but a bulk of them are actually temple goers. In fact, even when for the majority of tourists visiting Goa, the equation is simple: ‘Goa = Sun, Sand & Sea’, over a dozen major temples and several smaller ones attract regular and annual crowds that have a sizable contribution to Goa’s economy. 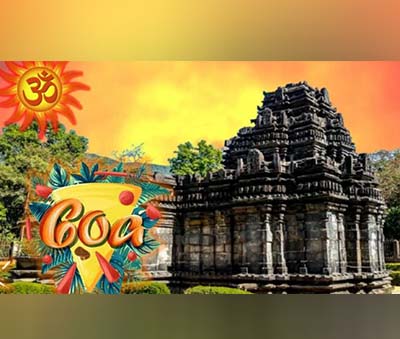 But even before the pandemic and lockdown, tourists in general were unaware of Goa’s rich tradition of multiple temples for centuries, and it would only be the niche tourists who would opt for it or those like Pai, who came for their deities.

Amongst the 50-odd main temples across Goa, about a dozen stand out for various reasons, their distinct architecture being one of them. Brick and mortar structures, most of these big temples are 400-year-old, have unique tiled, sloping roofs and almost all of them have ‘deep maal’, a vertical decorative pillar with niches to keep earthen oil lamps. Each temple compulsorily has a tank / water body next to it.

Mangeshi temple is amongst the most famous, but there are scores of others. Shantadurga at Kawale, Mhalsa Narayani at Mhardol, Lakshmi Nrusinha at Veling, Ramnathi and Mahalakshmi at Bandivade, Kamakashi at Shiroda, Santeri at Kelshi are amongst the bigger temples. Many of them are listed on the official website of Goa Tourism Development Corporation (GTDC).

And then there are temples with even older vintage. The 1000-year-old Mahadev temple at Tambdi Surla near the border with Maharashtra and about 700-year-old Rudreshwar temple at Harale are the stone temples. When the Portuguese conquered Goa, devotees of several temples lining the coastal areas took the deities away to either deep inside the forests and undulating landscape of Goan territory, which now comprises the area between Panaji and Fonda, or further away to coastal Karnataka. With it, a lot of community members — all Konkani speakers — too migrated away to almost the entire coastal belt from south Gujarat to Kerala. Konkani speaking Gaud Saraswat Brahmins (GSBs), scores of Marathi speaking families from across Maharashtra and of course, many from Goa itself, all have their family deities in Goa.

Shanta Durga at Amone is the family deity, the Kuldevi, of senior journalist Rajdeep Sardesai’s family that hails from Madgaon. Not much into religious rituals — “God resides in my heart” — Sardesai said, “but I visit Goa for family functions regularly”.

Sardesai agreed that outsiders are unaware of the rich temple traditions. “Goa lives by the river and not by the sea. Once you start discovering the river, you discover the real Goa. There is nothing wrong in promoting beaches but there is more to Goa than the beaches,” he said.

Over the decades, especially after Independence, the diaspora spread to other states and even abroad. Many families make it a point to annually visit their family deities, many visit when there is a special occasion such as a marriage in the family and likewise. “The Goan temples are unique by the fact that the deities are identified not just as Brahminical, but those belonging to all types of communities. The temples had a land of their own, they supported the economy of the area around them,” said Padmashree Vinayak Khedikar, author who has documented the folk arts and literary traditions of Goa.

Families and villages from ‘thal’, a local term meaning the catchment for that temple, were dependent on the temple as a central institution and in turn they donated to the temple. “Each of the temples is an independent Sansthan institution. Till a few decades ago, anyone from the thal getting married would get a saree and dhoti from the temple. Also, some minor repairs or such chores to be carried out at people’s homes were supported by the temple,” said Khedikar, who has authored a book ‘Goa Dev Mandal: Unnayan aani Sthalantar’ (Goa temple boards: upgradation and migration). e

“Except for the law & order, the temples reigned over their respective thal even in the Portuguese era. There was a Mahajan system — which led to a Mahajani Act in the late 18thecentury — who were responsible for the maintenance of the temples and all its real estate. There were separate families identified for daily puja. Much of it has changed later,” he said. But he was non-committal about the popularity of these temples. Sardesai said, “Temples would have to be promoted by the local community.”

“Last 6-8 years, lots of people who read my blogs budget a day or two for temples and inform me or ping me or ask for information. Sometimes, they also put out a thread on social media and tag me to say, it was because of my blog,” said Anuradha Goyal, author, columnist and blogger based in Goa and who has extensively written about Goa temples.

There has been no active promotion of temples by the state either. The BJP government for the last 10 years has had no promotional schemes for popularising temples to domestic tourists. However, given the political mileage that ‘pilgrimage’ is yielding — Delhi Chief Minister has announced trains to pilgrim places from Goa; West Bengal Chief Minister Mamata Banerjee said Trinamool Congress stood for the temple, mosque and church; the Congress seems to have slowly woken up to the opportunity.

Former Deputy Chief Minister Ramakant Khalap agreed that temple tourism has been neglected and also acknowledged the contribution of temples in Goa’s economy. “Ahead of the Assembly elections, we are preparing the Congress manifesto. It will prominently feature dev ghar (temple) promotion and planning to celebrate Goa as ‘God’s Own Abode’,” Khalap said.

However, his idea of places of worship is not restricted to Hindu temples. “We plan to promote all places of worship. Puranas tell us this is a place reclaimed by Parshuram. Parvati did her penance here, we have Shanta Durga. Then much later came the Buddhists and Jain, there are a lot of remnants. Jews were here, Muslims were here and last were the Portuguese. Goa is a good example of how all religions have a syncretic existence. The temples, churches, and mosques, we have all of them,” he said.

“Our manifesto will demand to have designated state festivals from each religion,” Khalap added.