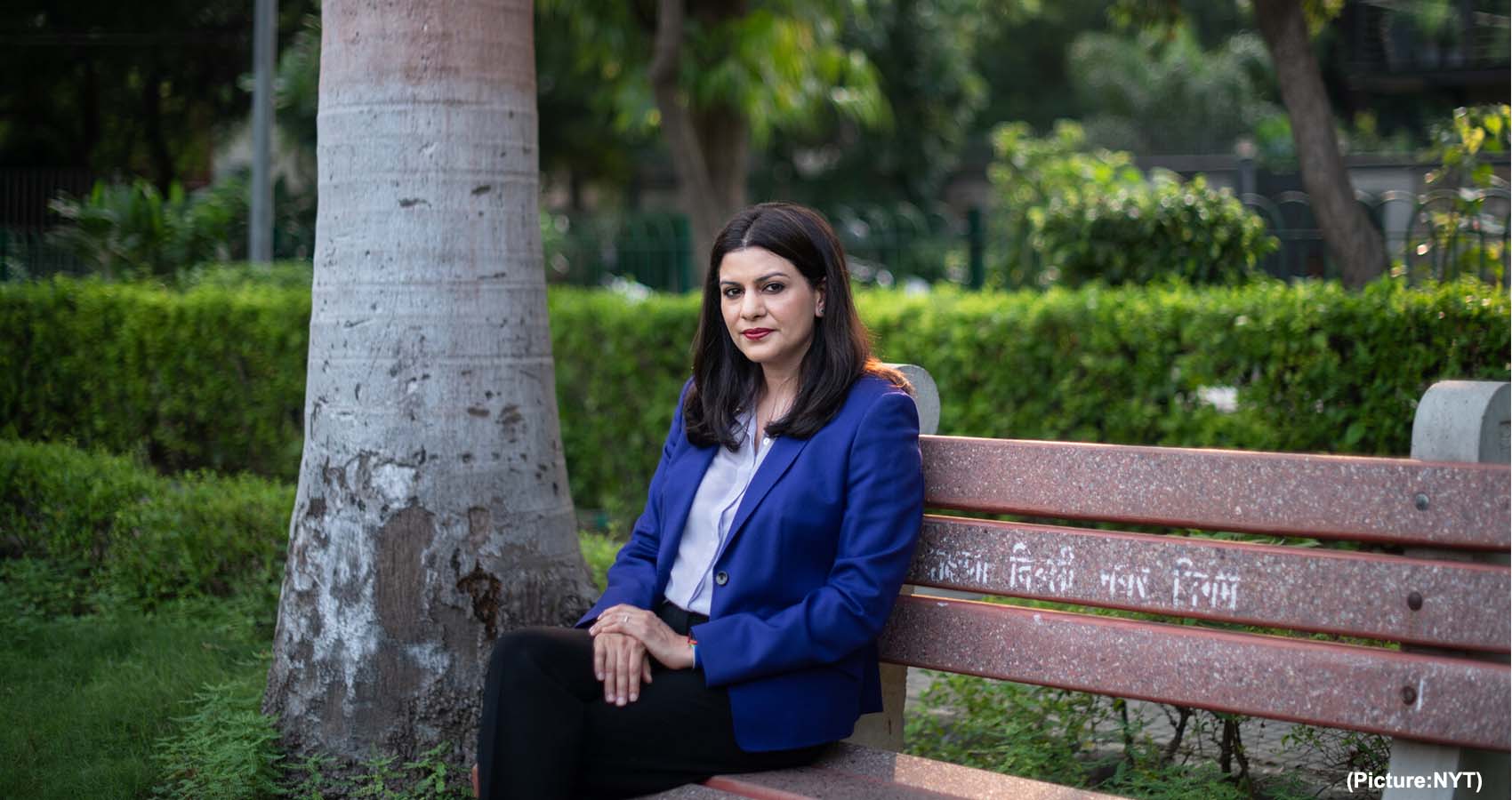 Several prominent female journalists and media personalities in India including ex-NDTV anchor Nidhi Razdan have been targeted by online scammers with promises of prestigious jobs at Harvard, the New York Times reported on Thursday.

While the identity of the scammers remains a mystery, the incidents have raised questions about why Harvard — despite its reputation for fiercely protecting its brand — “did not act to stop the scam, even after being explicitly warned about it” by one of the victims, the Times said.

Another target was a spokeswoman for the ruling Bharatiya Janata Party, Nighat Abbass. When the scammers pushed for her passport details and other personal information, she checked directly with one of the Harvard administrators included on the emails.

That administrator, Bailey Payne, a programme coordinator in the office of Harvard’s vice provost for international affairs, responded, saying the official invitation that appeared to have been sent from her Harvard.edu email address was fake.

When Payne asked Abbass if she would like to share more information, Abbass sent in a trove – the phone number from the U.A.E., the emails, screenshots of the fake Harvard documents and hotel booking records. But it’s not clear what action, if any, Harvard took, the Times said. Payne did not respond to requests for comment.

Jason Newton, a Harvard spokesman, declined to comment on what the university did with the information Abbass provided, the paper said. The first known target was outspoken female journalist Rohini Singh, who received a Twitter message from someone calling himself Tauseef Ahmad in mid-August 2019.

Ahmad invited her to participate in a high-powered media conference. Harvard would pick up all expenses. She, however, grew suspicious after Ahmad connected her to a colleague, introduced as Alex Hirschman, who wrote to her from a Gmail account rather than an official Harvard.edu email address.

Singh ceased communication. The next target was another female journalist, Zainab Sikander, who too received a Twitter message on August 22, 2019 from Ahmad, inviting her to participate in a high-powered media conference at Harvard.

It was the same message sent to Singh, the Times said. When she asked for a formal invite from a dean, it never came. Sikander then broke off contact as well. The next target was another female journalist working at a prominent Indian publication.

Speaking on the condition of anonymity, she said she quickly broke off contact after getting suspicious about the scammer’s U.A.E. phone number. In late November 2019, the hackers were well practised when they reached out to Razdan, a news anchor at the apex of her career.

She received the first email on November 14, 2019, from an earnest sounding student – Melissa Reeve – inviting her to a Harvard media seminar. She was then introduced, by email, to another student, Tauseef Ahmad. When he said there might be a journalism job available at Harvard, Razdan let her hopes soar.

The next thing Razdan knew, she was interviewing with someone claiming to be Bharat Anand, the name of a real vice provost at Harvard. She never saw him, though. The interview was by phone. “This is where I feel I really messed up,” she said. “I should have insisted it be a video call.”

The scammers were taking bolder steps to impersonate Harvard. They bought a website from GoDaddy, HarvardCareer.com, in January 2020 and set up a Microsoft email server that would soon allow them to send messages stamped with Harvard’s name.

Unlike earlier owners of the domain, they opted for privacy protection that obscured their names from public registries of website owners, the Times said.

Razdan was then asked for references. Each of the people Razdan enlisted received an official looking email from HarvardCareer.com with a web link to upload a recommendation.

Harvard says it fiercely protects its trademark, employing software to detect new websites that infringe on its brand, but Newton, the university spokesman, declined to say if it had detected HarvardCareer.com, the Times said.

The scammers continued to use it to send emails, capitalising on Harvard’s reputation. They also copied employment documents from Harvard’s official website, using them as fodder as the scam advanced, the Times said.

In February 2020, right before Covid-19 exploded across the world, Razdan was told the job was hers. She received a lengthy contract that included everything from arbitration clauses to details about dental insurance. In June 2020, she announced to the world, via Twitter, about her move to join Harvard University’s Faculty of Arts and Sciences as an Associate Professor teaching journalism.

Online classes were supposed to start in September. Right before classes were to begin, she received an email saying there was a delay because of Covid-19. The scammers would use the pandemic many times as an excuse for delays or slip-ups. They also asked her to install Team Viewer, which is software that enables computers to connect to each other.

Team Viewer would allow the scammers to access files on her laptop, but Razdan didn’t know that. Trying to be helpful, she downloaded the software. The scammers played off Razdan’s eagerness to connect with faculty members. Several times they invited her to do a video call with Emma Densch, a real dean at Harvard.But the calls kept getting cancelled at the last minute.

By December, Razdan began to get annoyed at what she thought was flakiness. She reached out to officials in Harvard’s human resources department. They didn’t write back. She then emailed Densch’s office directly, asking about the cancelled video calls. Densch’s assistant wrote back that Razdan was never on the dean’s schedule.

The assistant then asked: Who were you talking to? Razdan sent in a flurry of correspondence, including her signed contract. That’s when she received the shocking email in the middle of the night. Just like Abbass, she urged Harvard to investigate, emailing the university that “Someone/group of people have been impersonating senior Harvard officials and forging their signatures, and must be brought to book.”

She said Harvard never wrote back, the Times reported. She turned to Jiten Jain, the director of a cybersecurity firm in India called Voyager Infosec, to perform a forensic analysis of her laptop and devices. Jain, who shared his findings with The New York Times, said Razdan’s email account had likely been hacked.

Worse, Jain found remnants of a suspicious installer file on her computer, a sign that malware may have been installed. Razdan has filed an FIR with the Delhi Police which is investigating the hoax. It is still uncertain why Razdan and the other women were targeted, according to the Times report.

Usmani was speaking to IPS in an exclusive interview in Uttar Pradesh (UP) – the largest state in India with a population of about 240 million, of which 44 million are Muslims. Half of the Muslim population in the state are women.

Usmani, a director at the UNFPA headquarters in New York, originates from UP. She wonders how such a large number of people have remained invisible in this day and age of technology.

She said that a chance remark made by a journalist in New York led her to start the Rising Beyond the Ceiling (RBTC) initiative in UP, her place of birth. The male journalist told her that she was the first Indian Muslim woman he had spoken to in his life.

Celebrating the success of Indian Muslim women and the publication of a book, Rising Beyond the Ceiling were (back) computer science engineer Sameena Bano, and drone pilot Mohsina Mirza with (front) educationalist Dr Farzana Madni and biotechnologist Seema Wahab. Credit: Mehru Jaffer

Long after her meeting with the journalist, Usmani could not stop thinking of how millions of Indian Muslims remain unknown despite their creative contributions to society.

Colourful and inspiring images of countless Muslim women she knows flashed across her mind. She decided to share her troubling thoughts with other female friends and family members.

Usmani has over 25 years of experience in policy and programming leadership, focusing on women and girls and their reproductive health and rights. She reached out to like-minded women in UP, and within days a team of six professional Muslim women was formed.

The RBTC initiative is referred to as the team’s ‘COVID’ baby because it was initiated in early 2020 at the peak of the second wave of the deadly pandemic in India.

“Our brief was to work online and to scout and profile 100 Muslim women in UP. The purpose was to document the inspiring lives led by some Indian Muslim women,” Sabiha Ahmad, team coordinator and social activist, told IPS.

The idea of documenting the extraordinary lives of Indian Muslim women was born out of the urgent need to change the stereotypical narrative about women by women.

The team liked the idea of getting women to build an alternative narrative of each other by curating real-life stories of successful Muslim women in all their diversity.

The goal was to make these lives visible and drive a new narrative around Indian Muslim women. The result was a 173-page book. It documents the women from the state who drones and aeroplanes, weave carpets, serve in the police and army, write books and poetry, paint and bag trophies in tennis and snooker competitions.

There are profiles of politicians, trendsetters, doctors, entrepreneurs, and corporate professionals who met in Lucknow recently to celebrate the RBTC book and meet each other in person.

Usmani used her latest visit to Lucknow to release Rising Beyond The Ceiling formally. The directory details the lives of 100 Indian Muslim women whose inspiring stories shatter the stereotypical narrative a group perceived as primitive, veiled and suffering.

Faiza Abbasi, 47, contributor and co-editor, says the RBTC directory dares to write a different story. It is a step by women to celebrate each other. “We come forward to highlight each other’s achievements and to take the road our grannies left untrodden,” smiles Abbasi.

Abbasi is an educationist, environmentalist, and outstanding public speaker with a popular YouTube channel. She recalls how her father celebrated her birth by distributing sweetmeats to family and friends. However, an elderly aunt questioned the festivities. The aunt asked why the energy and resources were being wasted, and a fuss made over the birth of a girl?

Not used to the relatively progressive environment of today, many women still hesitate to celebrate their achievements. “We at RBTC want to celebrate and to learn to appreciate each other,” assures Abbasi. The RBTC promises to branch out its research analysis and documentation to other Indian states to document the successes of Muslim women.

The work of RBTC is vital at a time when the majority of Muslim women in India are the most disadvantaged. Statistical and micro studies on Muslim women show that they are economically impoverished and politically marginalised.