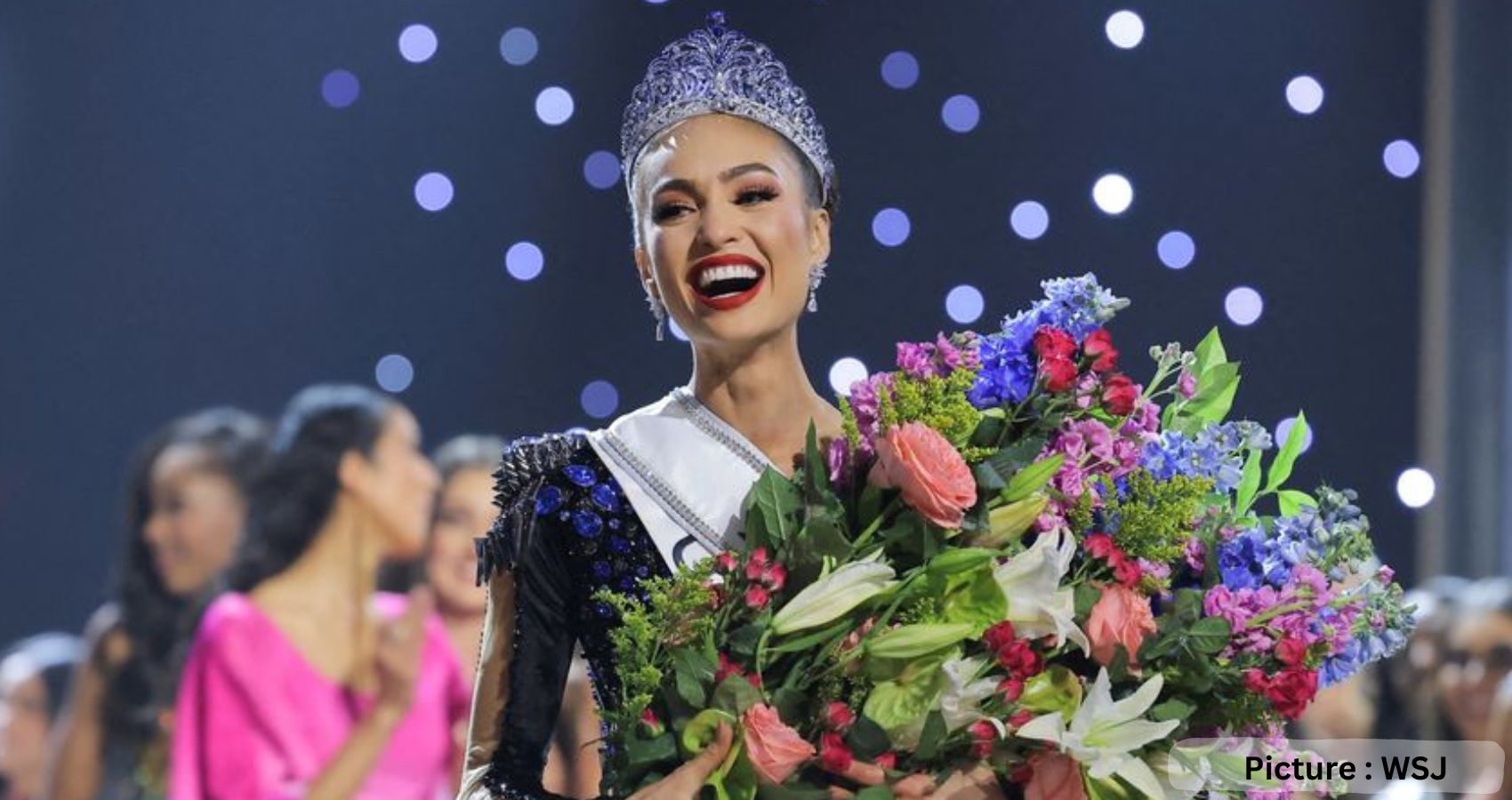 R’Bonney Gabriel, a fashion designer, model and sewing instructor from Texas, a Filipino American, was crowned the 71st Miss Universe on Saturday, January 14th, 2023.  Gabriel, who last year became the first Filipino-American to win Miss USA, took the crown ahead of Amanda Dudamel from Venezuela and Andreína Martínez from the Dominican Republic.

The pageant was held in New Orleans, Louisiana, with 84 women from around the world competing for the crown. Gabriel closed her eyes and clasped hands with runner-up Miss Venezuela, Amanda Dudamel, at the moment of the dramatic reveal of the winner, then beamed after her name was announced.

In the Q&A at the last stage of the competition for the three finalists, Gabriel was asked how she would work to demonstrate Miss Universe is “an empowering and progressive organization” if she were to win.

“I would use it to be a transformational leader,” she responded, citing her work using recycled materials in her fashion design and teaching sewing to survivors of human trafficking and domestic violence. “It is so important to invest in others, invest in our community and use your unique talent to make a difference.”

When Gabriel entered the Top 5, she was asked, “Miss Universe recently made an inclusive change allowing mothers and married women to compete this year. What’s another change you’d like to see and why?” Gabriel responded that she hoped the contest organizers would increase the candidate age limit.

“For me, I would like to see an age increase because I am 28 years old. And that is the oldest age to compete. And I think it’s a beautiful thing. My favorite quote is ‘if not now, then when?’ Because as a woman, I believe age does not define us. It’s not tomorrow, it’s not yesterday — but it’s now. The time is now,” she said.

Earlier in the pageant, Gabriel donned a red-orange cape inspired by a rising phoenix with the maxim “if not now, then when,” which she had dyed herself. The words take inspiration from her father’s advice to act on goals, dreams and desires.

In the final question and answer segment of the competition, the Top 3 contenders were asked how they would work to demonstrate Miss Universe as an empowering and progressive organization if they won the title.

Gabriel said she would use the platform to be a “transformational leader” and emphasized her passion as a force for good in the fashion industry by cutting down on pollution and using recycled materials in making clothing pieces.

“I teach sewing classes to women that have survived from human trafficking and domestic violence. And I say that because it is so important to invest in others, invest in our community, and use your unique talent to make a difference,” Gabriel said. “We all have something special and when we plant those seeds for other people in our life, we transform them and we use that as a vehicle for change.”

Jakkaphong has been outspoken about her experiences as a transgender woman, and is also the first woman owner of the pageant.

She made an appearance onstage to award the ImpactWayv Challenge winner to Thailand’s Anna Sueangam-iam, honoring her commitments for social good.

Miss Thailand had in the preliminary rounds of the pageant made waves in a dress made of soda tabs — a tribute to her humble beginnings and her parents’ work as garbage collectors.