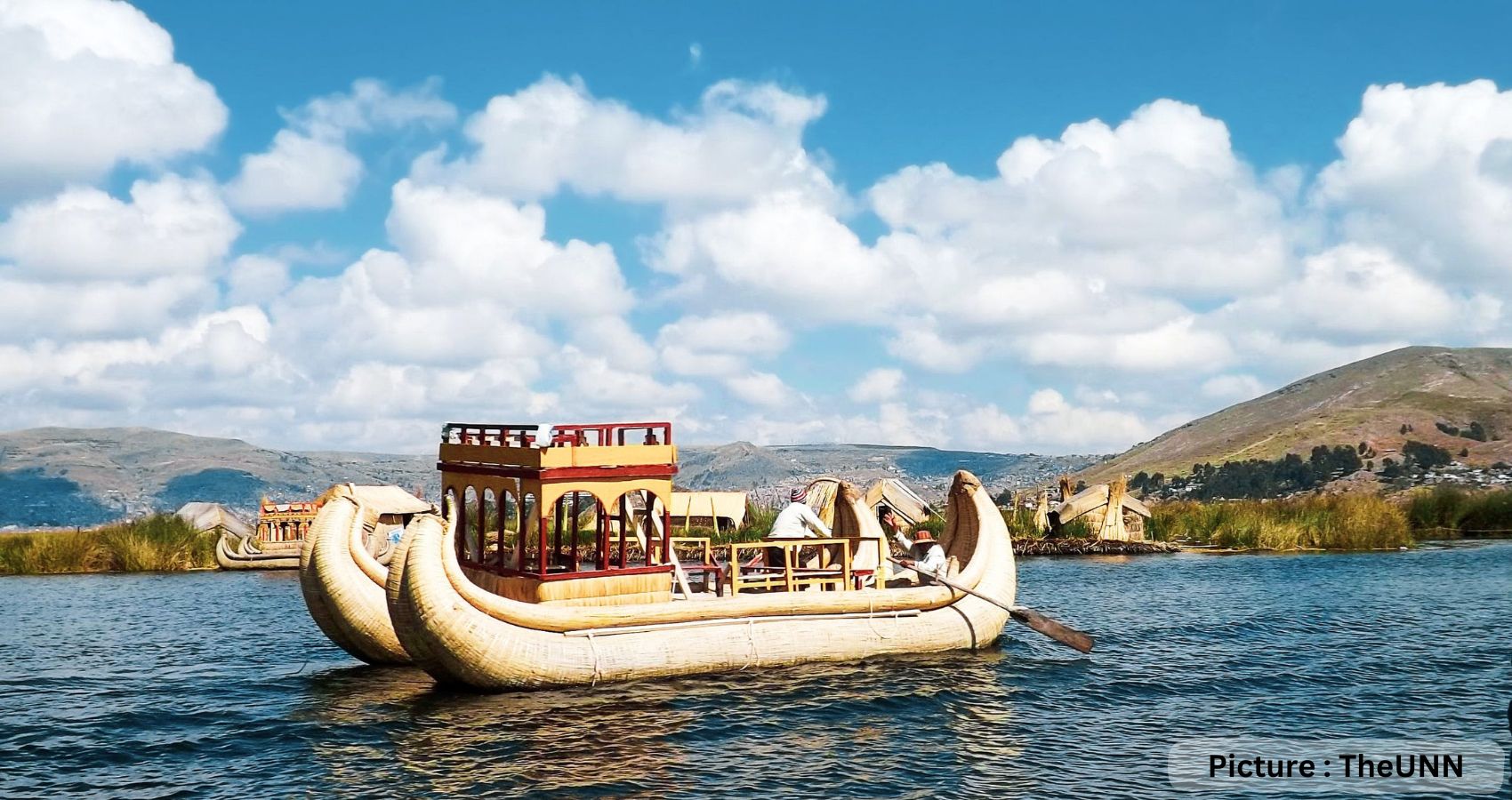 If I am going to try to tell this story, I am going to have to be brave. He is gone now. I have nothing to fear. But Desaguadero is a very small town, and he can find me easily. I am sure he is already combing the streets, looking for any excuse to go out of his way to kill me.

The location of this story is Desaguadero. The town is on a little bit of land connecting Peru to Bolivia right on the shores of Lake Titicaca. It is not a particularly scenic location. All of the houses look like hovels eternally being expanded on, and whatever viewpoints thrust out into the lake are blocked by these architectural obstructions. It doesn’t help that the protests have completely stalled the city. The protestors have dug up the road into the city, making it impossible to go anywhere or do anything. As for the people who have to live here, they are no longer going to work. They are just standing about, looking to get into a fight with anyone who looks disagreeable to them.

That is how the life of Francisco, or Paco, was born.Paco, a short man with spiky straight hair. Paco, a man of brown jeans and dusty shirts. Paco, born and raised in the suburbs of Puno… the suburbs of Cusco, in the centre of Desaguadero. He knew nothing about life except that life was a game and he was dealt the losing hand. There was a lot of abuse from his mother and father, there was a lot of anger directed towards him for no other reason other that his parents didn’t know any better. There was no one to help him remember the positivities of life. And so the only feeling that came to slit into his eyes was a constant sort of anger, that made him feel that anything he did was justified, and he deserved to hurt others. And so hurt others he did…

What am I writing?  I hope he never reads this… it sounds like I am out to slander him.

Though with what he did to me I should be filing a police report instead of sitting in my hotel room typing like this.

I said what I said, and I must commit to what I said I will do. I was not trying to lie when I told him I was a writer. I have been working these days as an English teacher, but I have also worked in many different fields over the course of my life, all to hide from my one true desire: to create something, a piece of art that could only come from myself. I tried acting and it didn’t get me anywhere. I tried directing but all I got was jealousy from seeing average talents work hard and become big stars. Writing has been the thing I’ve been trying to do since I was a teen. Scribbling little thoughts,  jotting in a notebook when I get bored, imagining stories for the thrill of it. None of it led to anything significant because I was just writing for the sake of trying.

Now I have something I must write, and yet none of it is coming out of me organically.

How can I begin to even consider what life is like for a Peruvian in one of these small towns, when I’ve only been here for a week?

The cold metal against my sideburn on an otherwise balmy day. The sound of the anxious waves crashing against the land. Thick sunlight.

That is what my experience was like. That is how I know Desaguadero. There have been some protests

against some political leader that have completely stalled the country. I don’t know the politician’s name. I don’t know why people are so angry. I’m just a traveller who has had my entire itinerary upended due to political events outside of my control. Of course being stuck in a small town with no way of getting out, it makes sense I would get bored. To make myself feel like I was doing something with my life I started taking walks in random directions, thinking that nothing bad had happened to me so far, so nothing bad was going to happen at all.

What is the reason why people want to kill or rob others?

I suppose I wouldn’t know, because I’ve never lived a life in which I was taught that to do such things is a necessity.

If I had stayed in Bolivia, I would have been revelling in the beauty of Lake Titicaca right now. Copacabana is like a version of Crete made by the Incas. Amantani feels like pure old country, untouched my modern life except for all the tourists who are camping out there. The weather is a little chilly so one needs one of those wool sweaters to feel comfortable. But all around are the expanses of a lake big enough to rival an ocean. There are stout wrinkled women walking about with their grandchildren, goats chewing under the most clay-shaped looking of hills, sun-kissed earth waiting to be savoured.

I chose to travel to Peru thinking I’d soon be seeing Arequipa, and Cusco, and instead I’ve gotten stranded here, in a town with nothing to offer. I should have been listening to the travel advisories. I should have stayed in La Paz until the political situation improved.

I felt a gust outside my window, and when I went to close it, I felt like there were eyes leering at me.

Could he really be waiting for me to finish my story, so that he can come take a look at it?

Desaguadero is only a few streets big. He must know where I’m staying. Not to mention given how long the protests have been going on for, I’m not going to be able to leave in the near future. I could be stuck here for many more weeks.

He could kill me, and with all the ruckus that is happening, people would think I just went missing.

I have to breathe. Or I have to go out and tell the police.

I should tell this damn story.

Paco Julio de la Santacruz was an angry lonely man. He grew up with a lot of poverty and abuse and that caused him to hate people abnormally. He saw foreigners as all the same no matter if they were white or brown, British or Filipino. They were rich people coming to his poor part of the world, and he had no regard for their life. He had a desperate and pathetic life that caused him to act out in violence. This is why he spotted out this particular fag, saw him as a weak and easy target, and threatened his life so that he could get him to empty his wallet.

I’m going to cry. This is not because my story is any good. This is because there’s a real story I have to tell before I can go anywhere with this.

I will write the truth for myself and leave it on the page. I can always delete it after I finish writing the actual story I’m trying to tell.

I was walking on the highway promenading towards what I thought was going to lead to one of an untouched viewpoint of the lake. It did ultimately lead to something like that. There were settlements here or there, but there were also people fishing, cleaning their clothes, and bathing. The pearly milky colour of the water shimmered as the weeds caught in the still shivered in the breeze. It was a stunning sight to behold. If I had been able to explore it without any further interruption I would have told myself I had found myself a proper treasure off the beaten path, one that required much more proper uncovering later on.

Except on the way back to my hotel I heard some footsteps. And when I finally got the sense to turn around the scuffles became fast paced. Soon there was a gun to my head and a hand covering my mouth.

He said something to me, but I don’t know how to speak Spanish. When I realised that he started shouting to me in English.

I knew what that meant. I gave him all that I had. But he kept shouting it.

I really had nothing left. I had to take out my wallet and show it. He didn’t like something about that. He slapped me with the gun.

I knew enough Spanish to know he was calling me an idiot. But then he was talking so quickly, he was slurring the words around like a drunk, and more importantly he had that venomous angry look of a murderer in his eyes.

He was going to kill me.

Immediately I started crying. He didn’t know a lick of English but I had to say what I was on my mind.

Please don’t kill me. I have so much more in my life to give. You can take my money, you can take my belongings, but don’t take my life. I haven’t done any of the things that I have aspired for myself. You see sir I’m a writer. There’s a story inside of me. Deep down I know it. But I haven’t taken the time to write it yet. So if you kill me there goes my story. I’m not the only one who is gone. Everything I wanted to create is gone as well. So don’t kill me please. Por favor.

Whatever I said was probably completely muffled by his hand. Nonetheless saying something with so much anxiety anguished something inside of him. He uncovered my mouth, only to wrap his arm around my chest, and to put his gun against my chin.  I had the feeling that at any moment he was going to pull the trigger.

So suddenly I said the following.

And yet something about it worked. I don’t know if it were divine intervention or a change in my chances, but the feeling in the air pacified. He pushed me off away from him and started taking a long look at me.  When I looked like I was about to speak he pointed that gun again and shouted at me. Of course I ran. I ran and I ran and I got back into my hotel and I shot up to the third floor and I locked the door to my room twice and I shut every window and I hid in the bathroom, and he wasn’t there. He had left me in peace so that I could go write.

Of course now I have no money in my wallet, and the people at reception keep knocking as if they are wondering when I’ll finally tell them what disturbed me to this extent. At some point I’ll tell them.

But for now I have to write this story. My life depends on it.