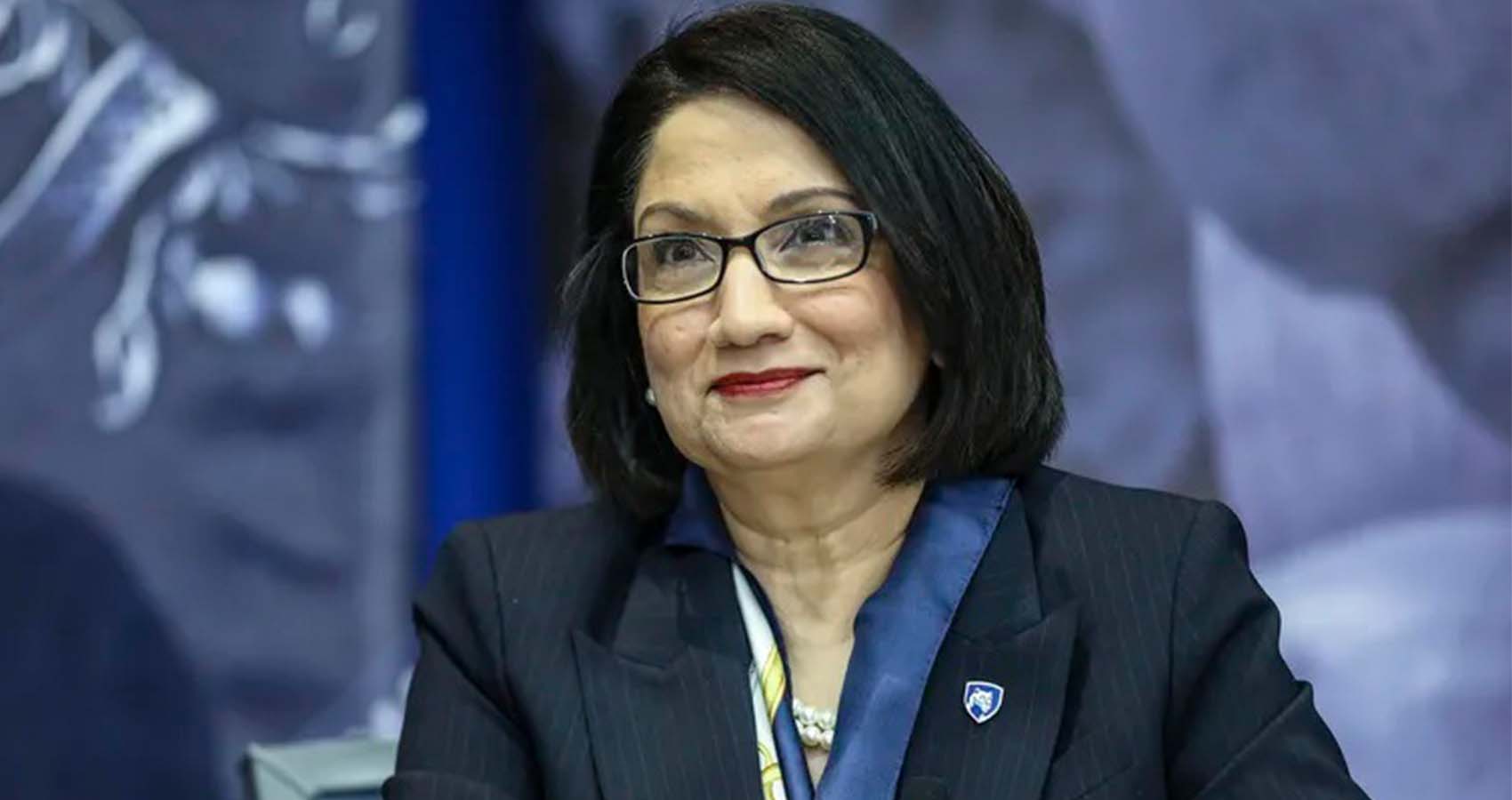 Neeli Bendapudi, currently president and professor of marketing at the University of Louisville, Kentucky, has been unanimously named Penn State’s next president by the Penn State Board of Trustees on Dec. 9. When she begins her appointment as Penn State’s 19th president in spring 2022, she will make history as the first woman and person of color to serve as the University’s president.

Bendapudi, currently the 18th president of the University of Louisville, is a recognized leader in higher education who specializes in marketing and consumer behavior. With a nearly 30-year career in academia, Bendapudi has taught marketing and served in a variety of administrative roles over the years, including as provost and executive vice chancellor at the University of Kansas, dean of the School of Business at the University of Kansas, and founding director of the Initiative for Managing Services at Ohio State University. With a focus on collaboration and development, Bendapudi has dedicated her career to student success, fostering inclusivity, and creating opportunities for students, faculty and staff to thrive. 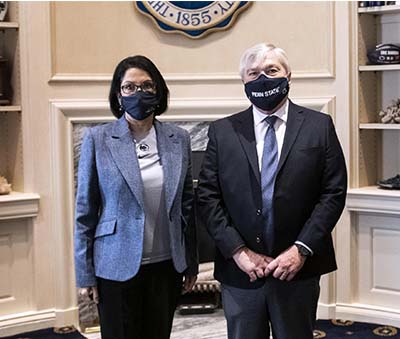 “Penn State is a world-class university, and I couldn’t be prouder and more excited to join this vibrant community of outstanding students, faculty, staff and alumni throughout the commonwealth and beyond.”

“Penn State is a world-class university, and I couldn’t be prouder and more excited to join this vibrant community of outstanding students, faculty, staff and alumni throughout the commonwealth and beyond,” Bendapudi said. “Thank you to the Penn State community and Board of Trustees. I am grateful for this opportunity and will make it my mission to help Penn State reach new heights across each of our campuses.”

After a comprehensive national search, Bendapudi was announced as the University’s next president during a Dec. 9 special meeting of the Board of Trustees following an extensive vetting process and overwhelming support from the Presidential Recruitment and Selection Committee, an 18-member group with student, faculty, staff and trustee representatives. She will succeed President Eric J. Barron, who will retire after serving Penn State for more than 30 years in various roles, including most recently as president since 2014.

“We are proud to welcome Dr. Bendapudi to Penn State. She is a dynamic and innovative leader who has dedicated nearly her entire professional life to higher education and is prepared to help our University advance in the ways we support students, create new knowledge and serve society,” said Matt Schuyler, chair of the Board of Trustees. “I want to extend my appreciation on behalf of the entire Board of Trustees to the many Penn State community members who participated in this selection process. Your engagement served as a critical framework throughout the search and has helped lead us to this exciting new chapter in Penn State’s history.”

Schuyler thanks President Barron for his years of dedicated service and has noted there will be a seamless transition between the two leaders.

“President Barron’s impact can be felt in every facet of the University, throughout the state of Pennsylvania and beyond,” Schuyler said. “His steadfast commitment to our students, faculty and staff; dedication to opening pathways to a Penn State education; passion for research and entrepreneurial innovation; and leadership during challenging times have been unwavering. Dr. Barron will leave our University in a most-desirable position for any leader to further our goals and mission.”

Following a rigorous interview process — including special small-group meetings with select faculty members — the full Board of Trustees interviewed and selected Bendapudi to be the University’s next president.

“We found Neeli Bendapudi to be an incredibly thoughtful, strategic leader with an inspiring breadth and depth of experiences in academia and research. As an accomplished leader, she will bring a forward-looking perspective to the presidency while remaining grounded in the important connections with our students. The qualities of a 21st-century academic leader — commitments to excellence, equity and opportunity — are second nature to Dr. Bendapudi,” said Nina Jablonski, Evan Pugh University Professor of Anthropology and member of the Presidential Recruitment and Selection Committee. “I am honored to have served Penn State in this capacity, alongside my dedicated colleagues. We committed ourselves to recommending the best individual for this vital position.”

The board and committee were very impressed with Bendapudi’s commitment to research, innovation and economic development, and also to how her experiences and vision align with Penn State’s modern land-grant mission and values, according to Schuyler.

“Thank you to the many students, faculty, staff and trustees who served on the Presidential Recruitment and Selection Committee and Next Gen Penn State Advisory Group, including the outstanding leadership from trustees Mark H. Dambly, David Kleppinger and Julie Anna Potts throughout this process,” Schuyler said. “Your collective dedication has resulted in an exceptional new president for Penn State, and I am thrilled to be able to begin working with her as our president-elect.”

Following Barron’s retirement announcement, the Board of Trustees moved forward with a phased approach to select a new University leader and named the Presidential Recruitment and Selection Committee to lead the search with support from executive search firm Spencer Stuart. During a listening phase in the spring, Penn State community members shared their input and recommendations resulting in a Next Gen Penn State report that was used to inform the presidential position profile. The official search launched in July 2021 and throughout the fall the Presidential Recruitment and Selection Committee developed a pool of the highest-quality candidates, with deliberate effort to identify diverse, high-performing candidates across genders and backgrounds.

“It was a privilege to serve the University in this capacity on behalf of my fellow students and peers,” said Erin Boas, undergraduate student member of the Presidential Recruitment and Selection Committee and president of the University Park Undergraduate Association. “I couldn’t be more excited to welcome Dr. Bendapudi to Penn State. She is a charismatic, transformational leader who cares deeply about students and has committed herself to advancing all aspects of the student experience.”