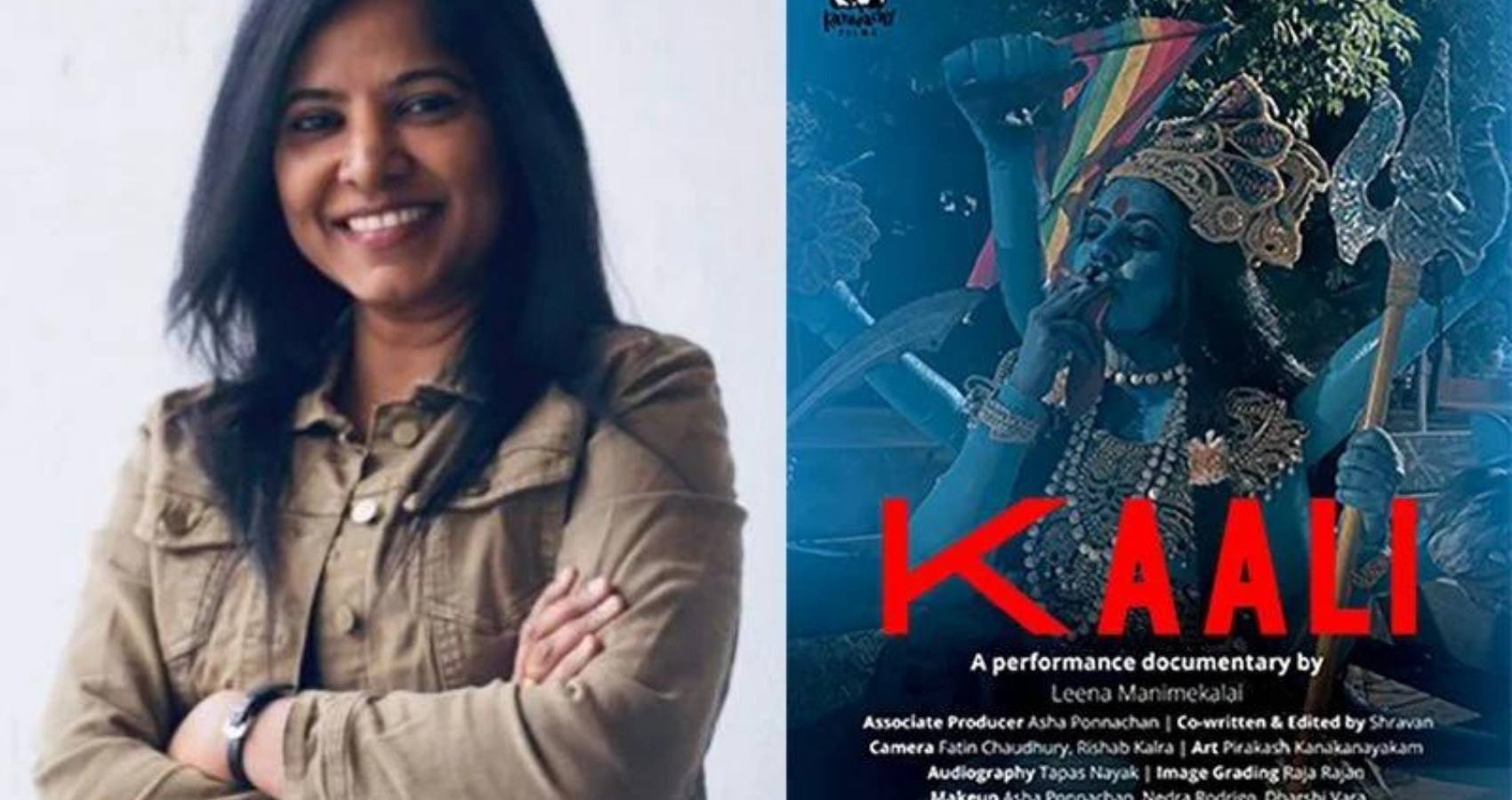 A filmmaker is challenged for her depiction of the Hindu goddess.

(RNS) — Leena Manimekalai’s 2019 film “Maadathy,” about the brutalization of a Dalit girl who becomes a village deity, began with the words, “Behind every deity in India, there is a story of injustice.” These words have proven prescient. An injustice is brewing around Manimekalai’s new film “Kaali”: The film and its poster have brought the filmmaker threats of arrest, rape and murder. Manimekalai calls “Kaali” a “performance documentary” — a personal and poetic meditation on the female divine. In a six-minute excerpt shown at a multimedia exhibition in Toronto last week, Mother Kali, Hinduism’s powerful goddess of death and the end of time, wanders through a pride festival in Toronto at night. She observes groups of people out on the town, takes a subway ride, stops in a bar. People take selfies with her. In the last frame, she is on a park bench where a man gives her a cigarette. The poster for the film shows the goddess smoking a cigarette and holding a pride flag.

The Aga Khan Museum and Toronto Metropolitan University caved in to pressure from the Indian government and issued apologies for screening the film. Twitter removed Manimekalai’s tweet showing the film’s poster. Manimekalai is wanted for arrest for “hurting religious feelings” in Assam, Uttarakhand, Haridwar, Madhya Pradesh, Uttar Pradesh, Delhi and several other states and has received numerous death and rape threats.

In an email Manimekalai said the controversy had made it impossible for her to return to India. “My safety is a big question mark now and I feel totally derailed to be honest. But I don’t want to bow down, and so I’m fighting with full power.”

Manimekalai comes from a South Indian community that worships the Goddess Kali as “a pagan goddess” who “eats meat cooked in goat’s blood, drinks arrack, smokes and dances wild,” the filmmaker told The Guardian.

Manimekalai, who identifies as bisexual, says, “My Kali is queer. She is a free spirit. She spits at the patriarchy. She dismantles Hindutva. She destroys capitalism. She embraces everyone with all her thousand hands.”

Someone unfamiliar with Hinduism might say Hindus are justified in their outrage. It’s important to understand, however, that the film and its poster are in line with a long tradition of diversity of Hindu practice and belief and immense personal freedom in one’s relationship with the divine.

An Indian member of parliament, Mahua Moitra, defended the film, saying, “To me, Kali is a meat-eating, alcohol-accepting goddess. I am a Kali worshipper. I am not afraid of anything. Not your goons. Not your police. And most certainly not your trolls.” Moitra is now facing criminal charges, too.

Kali first appeared in Indian culture as an Indigenous deity before being absorbed into the Brahminical traditions and Sanskrit texts in the present-day form “as a dangerous, blood-loving battle queen.” Hindu Goddesses are at the same time fierce warriors against evil and injustice and unconditionally loving and protective, and Kali’s devotees consider her the Divine Mother of all humanity.

The South Indian Goddess Mariamman is often offered alcohol, and animals are sacrificed for her. The Guyanese “Madrassi” community comprises Hindus who worship Devi (the Mother Goddess) in all her forms, particularly Mariamman and Kateri Amma. “We firmly believe that devotion to Amma is subjective, and she comes to each of us in a unique way,” Vijah Ramjattan, president and founder of the United Madrassi Association in New York, told me. The community’s first Madrassi Day parade in 2017 featured an LGBTQ artist and dancer, Zaman, perform as the goddess Sundari.

Hindu deities smoke, drink, get high and sometimes eat meat. It is very common for alcohol, meat and even cigarettes to be offered to deities, particularly Kali. As the writer Shuddhabrata Sengupta explains, in the late 19th century, a Kali brand of cigarettes was produced in Calcutta.

One advertisement read, ‘If you care for the development of ‘svadeshi’ [homegrown Indian] products, if you feel responsible for the poor, miserable, working people of this land, if you can truly distinguish between good and evil, then, o Hindu brothers, you must use these ‘Kali’ cigarettes!”

Walking through the narrow labyrinthine lanes of Varanasi, one of the holiest Hindu cities, it’s hard to miss the government-run “bhang” stands selling cannabis in the form of cookies and cakes, or as a drink. Most holy men in the city take bhang, local swamis told me, to deepen the experience of meditation and communion with God. Drugs have been part of Hinduism since prehistory; Lord Soma, the Vedic god of healing and plants, is named for a hallucinogenic which was offered to god and drunk by priests.

The extreme and egregious reaction to “Kaali,” the film, and its poster denies the Hindu idea that we all have tendencies towards goodness (satva), passion (rajas) and lethargy (tamas) and that our job is to ensure that the best parts of us win. We are allowed our mistakes because even the gods err.

And gods are everywhere: I grew up with my gods and goddesses on everything around me: my lunchbox and water bottle, clothes, vehicles, toys, movies and movie posters. We were taught to think of god in very intimate ways: Our parents and teachers were god, but so were spouses and lovers. I was called Krishna in my family because my mother and her sister were both mother to me, and Krishna, too, had two mothers. A friend told me his uncle was called Krishna because he had a wife and a mistress; Krishna, too, is known for having several wives and lovers.

I always appreciated this intimacy Hindus have with the divine that allows us to choose a deity for our devotions, to shape that deity according to our own desires. We come to the god of our choice as we are, and god welcomes us.

The violence and misogyny Manimekalai is facing is unconscionable, but the larger issue for Hindus is that her critics are bent on creating a homogenized Hinduism robbed of its glorious diversity. If there is a story of injustice behind every deity in India, the injustice today is that the deities themselves are being constrained, reduced, strangled. This homogenization favors Brahminical and Sanskritized texts and practices and erases the ways that non-Brahmin communities worship.

But the two issues are essentially the same: This homogenization favors male brutality. The Hindu nationalist version of the god Rama is warring, angry, with no Sita, his female companion, by his side. The Hindutva Hanuman is blood-red and furious, instead of the embodiment of love and sacrifice. Meanwhile they whitewash Kaali of everything that makes her fierce

In the impassioned words of Moitra, “Neither Lord Ram nor Lord Hanuman solely belongs to the BJP,” she said, referring to India’s ruling Hindu nationalist party. “Has the party taken the lease of Hindu dharma? … [The BJP] is a party of outsiders that tried to impose its Hindutva politics but was snubbed by the electorate. BJP should not teach us how to worship Maa Kali.”

Kali, she concluded, “urges us all to resist the BJP’s attempt to “impose its agenda of Hindutva (Hindu nationalism) and thrusting its monolithic views” for the sake of the country.  This starts with giving a young filmmaker the right to express herself freely through her art. (Sunita Viswanath is a co-founder and executive director of Hindus for Human Rights. The views expressed in this commentary do not necessarily reflect those of Religion News Service.)