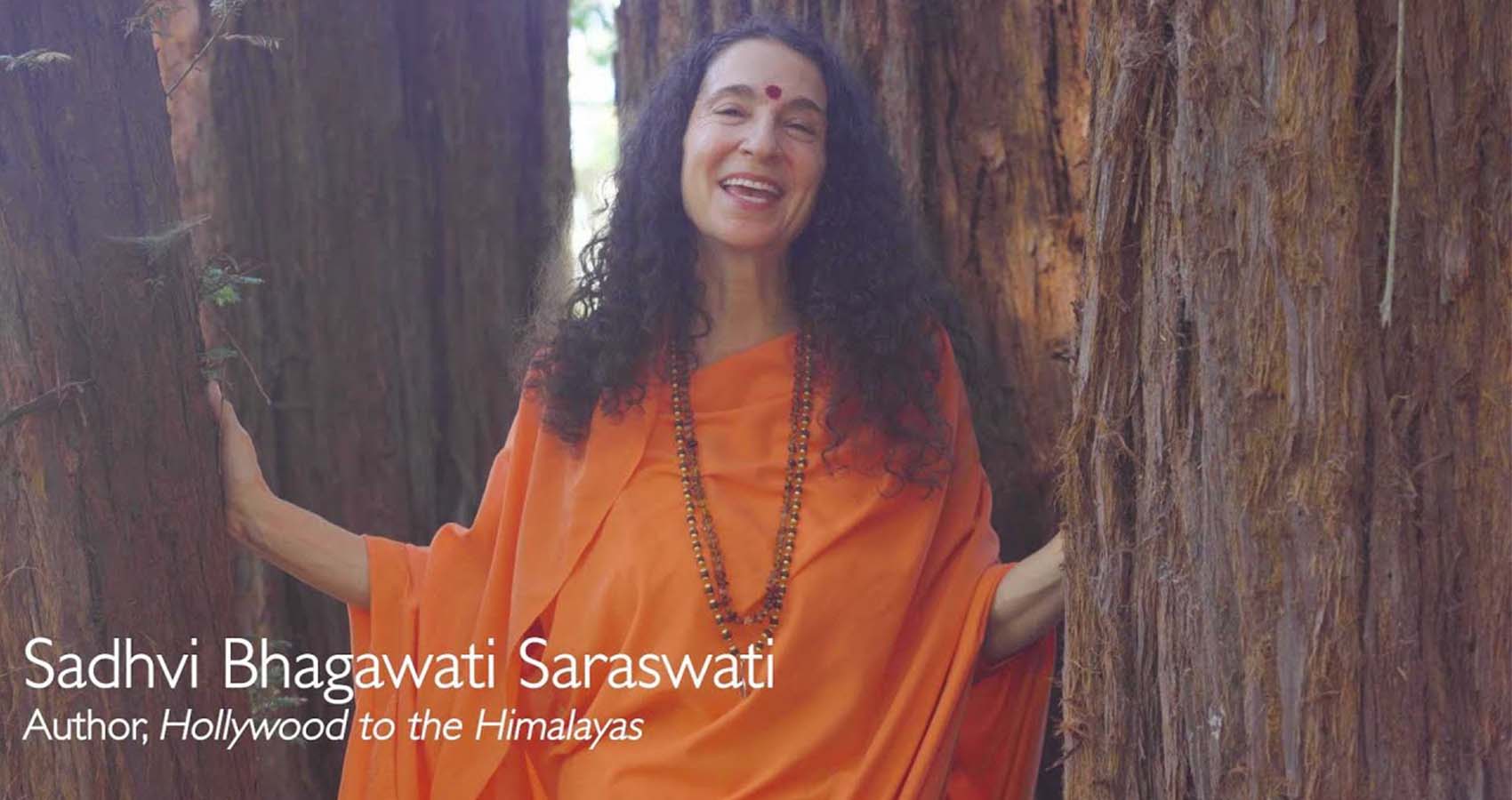 “Through the powerful, totally unexpected experience of Oneness with the divine that I had on the banks of the Ganga river, I realized that I am part of the sacred perfection of the universe, that I am One with all,” says Sadhvi Bhagawati Saraswati.

During a solemn ceremony on Sept. 9, 2021 at the Indian Consulate in New York, an enlightening memoir of a reluctant spiritual seeker who finds much more than she bargained for when she travels to India, was released. In her address during the release of the much acclaimed bookk, “Hollywood to the Himalayas: A Journey of Healing and Transformation’ by Sadhvi Bhagawati Saraswati shared with the audience her experiences and perceptions and how the power of faith had transformed her life: “Having grown up in Hollywood with all the opportunity and all the privilege, what I didn’t have was faith or a connection to God.  Through the powerful, totally unexpected experience of Oneness with the divine that I had on the banks of the Ganga river, I realized that I am part of the sacred perfection of the universe, that I am One with all,” she told the audience. 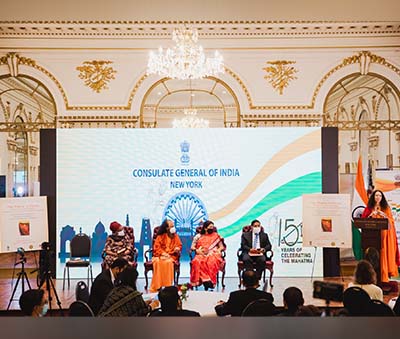 Described as “a special confluence of faith, culture and leadership, where leaders from the United Nations, from Government and from Interfaith came together to celebrate the power of faith to heal and transform ourselves, our communities and our world,” the event was organized jointly by Religions for Peace, Indian Consulate and American Indian Public Affairs Committee with Global Interfaith WASH Alliance and Divine Shakti Foundation, Parmarth Niketan.

The book describes the journey of American-born Sadhvi Bhagawati Saraswati and the unexpected way her life was transformed when, twenty-five years ago, she traveled to India with a backpack, “and had an experience of the Divine on the sacred river Ganga. Faith, and a connection to God, became that which freed her from personal suffering and that which has led to her meaningful international work as a faith leader in the development sector, planting and nourishing seeds for peace, focusing on world health, water, sanitation and hygiene, and the rights and empowerment of women and girls.” 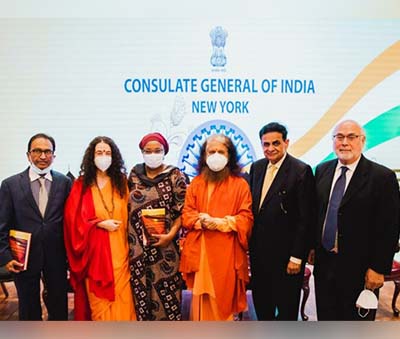 After the ceremonial lighting of the lamp and recitation of auspicious prayers, Sadhvi Bhagawatiji presented each of the dignitaries on the dais a copy of Hollywood to the Himalayas. Minister of State for External Affairs and Culture Meenakshi Lekhi praised the Indian-American community for its devotion to the well-being of India. “Let me say at the outset how proud I am of all of you. We, in India, are extremely grateful to our diaspora which carries on all the traditional functions and are the ‘Ambassadors of India’ while the formal Ambassadors have formal jobs to do. But the ‘informal ambassadors’ carry the job far, far, far better and reach out to people,” Lekhi said. “The values that India stands for are exhibited by people who are away from their homes, but carry their hearts on their sleeves and always believe in and stand up for Mother India,,” she added.

Alice Nderitu praised Sadhvi Bhagawati saying she “represents those religious leaders and actors who are taking a strong stand on the protection and promotion of human rights and on the prevention of atrocity crimes at international and local levels. Sadhvi Bhagawati embodies the quintessence of the local peacebuilders.   As United Nations Special Adviser on the Prevention of Genocide, I will continue to partner with Sadhvi Bhagawati and other women religious actors to advance the prevention of atrocity crimes globally.” Nderitu said, offering the full support of her office.

As a Stanford grad, in the midst of getting a PhD in psychology, Sadhvi Saraswati was comfortable with her life. Despite years of grappling with an eating disorder and trauma from her early childhood, she felt as if she was successfully navigating her way through early adulthood. When she agreed to travel to India to appease her husband—and because she loved the food—Sadhvi would have never imagined that she would be embarking on a journey of healing and awakening.

Hollywood to the Himalayas describes Sadhvi’s odyssey towards divine enlightenment and inspiration through her extraordinary connection with her guru and renewed confidence in the pleasure and joy that life can bring. Now one of the preeminent female spiritual teachers in the world, Sadhvi recounts her journey with wit, honesty, and clarity and, along the way, offers teachings to help us all step onto our own path of awakening and discover the truth of who we really are—embodiments of the Divine.

In her response, Sadhvi Bhagawati said that her experience and awareness transformed her life. She said, “Now, I’ve been so blessed to be able to share the power of faith with so many others and to use it for so much good, ranging from women’s empowerment and equality to environmental protection to water preservation.”