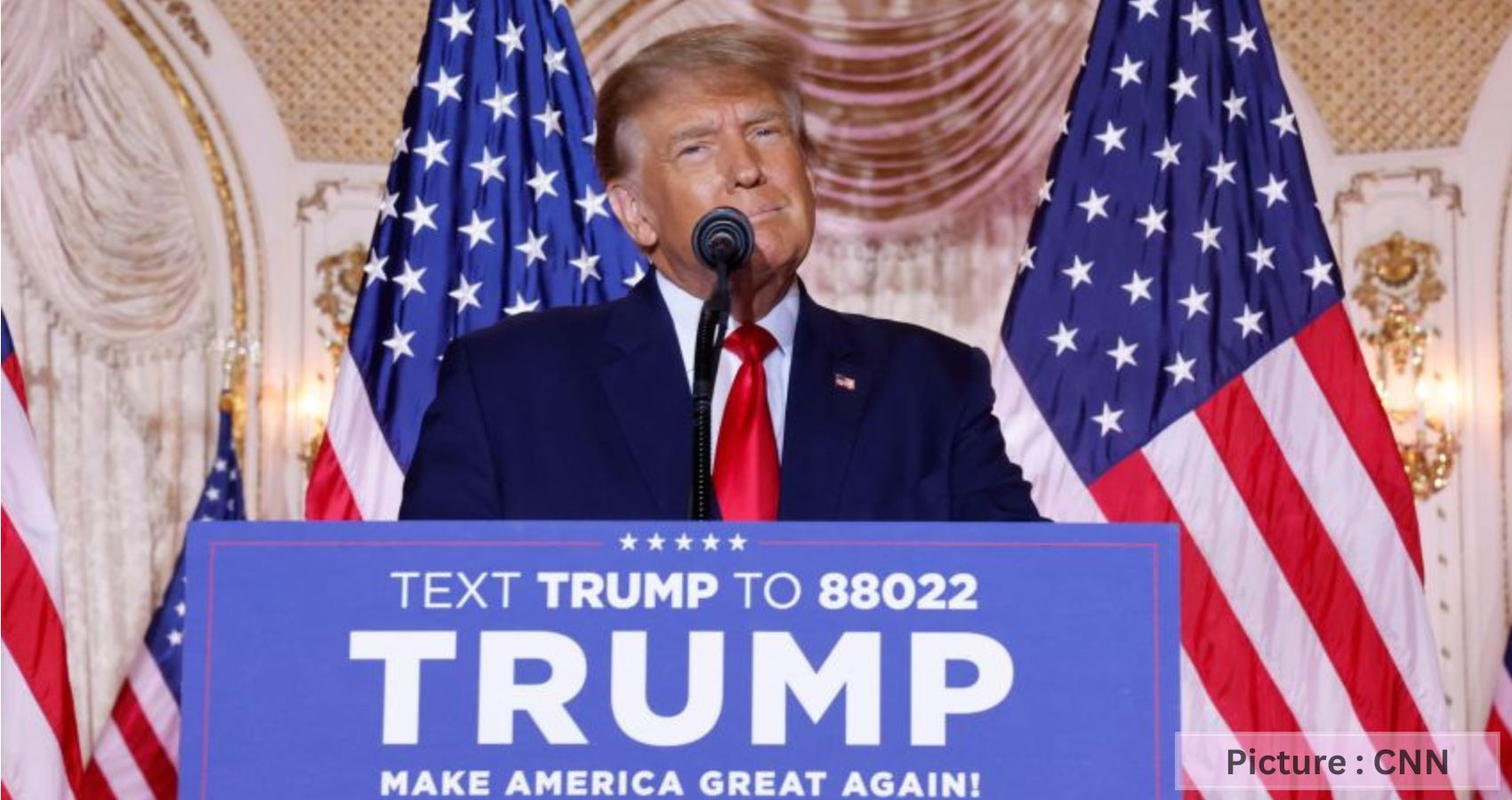 Former US President Donald Trump has announced his fourth bid for the White House, kicking off the 2024 presidential election cycle. “To make America great again, I am today announcing my candidacy for the President of the US,” Trump said at an event on Tuesday at his Mar-a-Lago estate in Palm Beach, Florida.

Shortly before his announcement, Trump also filed paperwork to officially run for President.
At the event, a voice over the loudspeaker introduced Trump as “the next president of the United States”, the BBC reported. He started his speech by digging into his successor President Joe Biden’s record and told supporters that “America’s comeback starts right now”.

Surrounded by allies, advisers, and conservative influencers, Trump delivered a relatively subdued speech, rife with spurious and exaggerated claims about his four years in office. Despite a historically divisive presidency and his own role in inciting an attack on the US Capitol on January 6, 2021, Trump aimed to evoke nostalgia for his time in office, frequently contrasting his first-term accomplishments with the Biden administration’s policies and the current economic climate.

Many of those perceived accomplishments – from strict immigration actions to corporate tax cuts and religious freedom initiatives – remain deeply polarizing to this day.

Touting his four years in office, the former President said: “In four short years, everyone was doing great… Everyone was thriving like never before.” He further claimed that the country’s economy was making a swift recovery when he left office, after falling during the coronavirus pandemic. “Now we are a nation in decline,” he said, citing high inflation rates.

Trump also said that Biden has brought the US to the brink of nuclear war with its handling of the conflict in Ukraine. “Even just today a missile sent in, probably by Russia, to Poland. The people are going absolutely wild and crazy and they’re not happy. They’re very very angry,” the BBC quoted the former President as saying.

Prior to his announcement on Tuesday, Trump had said that he would make an important announcement on November 15. In the recent months, he had been dropping hints about a potential third campaign for the White House, the BBC reported.

In October, he told a rally in Texas that he “will probably have to do it again”, while in September at an event in Pennsylvania, the former President said: “I may just have to do it again.” Just before the November 8 midterm elections, he told a Republican campaign rally in Sioux City, Iowa, that he would “very, very, very probably” be running for the White House again.

On the heels of last week’s midterm elections, Trump has been blamed for elevating flawed candidates who spent too much time parroting his claims about election fraud, alienating key voters and ultimately leading to their defeats. He attempted to counter that criticism on Tuesday, noting that Republicans appear poised to retake the House majority and touting at least one Trump-endorsed candidate, Kevin Kiley of California. At one point, Trump appeared to blame his party’s midterm performance on voters not yet realizing “the total effect of the suffering” after two years of Democratic control in Washington.

“I have no doubt that by 2024, it will sadly be much worse and they will see clearly what has happened and is happening to our country – and the voting will be much different,” he claimed.

Various media outlets have said this is the third; however, they have not taken into account his bid in 1999-2000 after affiliating with the Reform Party. In October 1999, during an episode of Larry King Live, Trump had announced his candidacy for the Reform Party nomination. A few months later, however, he suspended his campaign. Trump’s four presidential runs were, therefore, in 2000 (suspended), 2016 (won), 2020 (lost) and now, in 2022 (just announced).