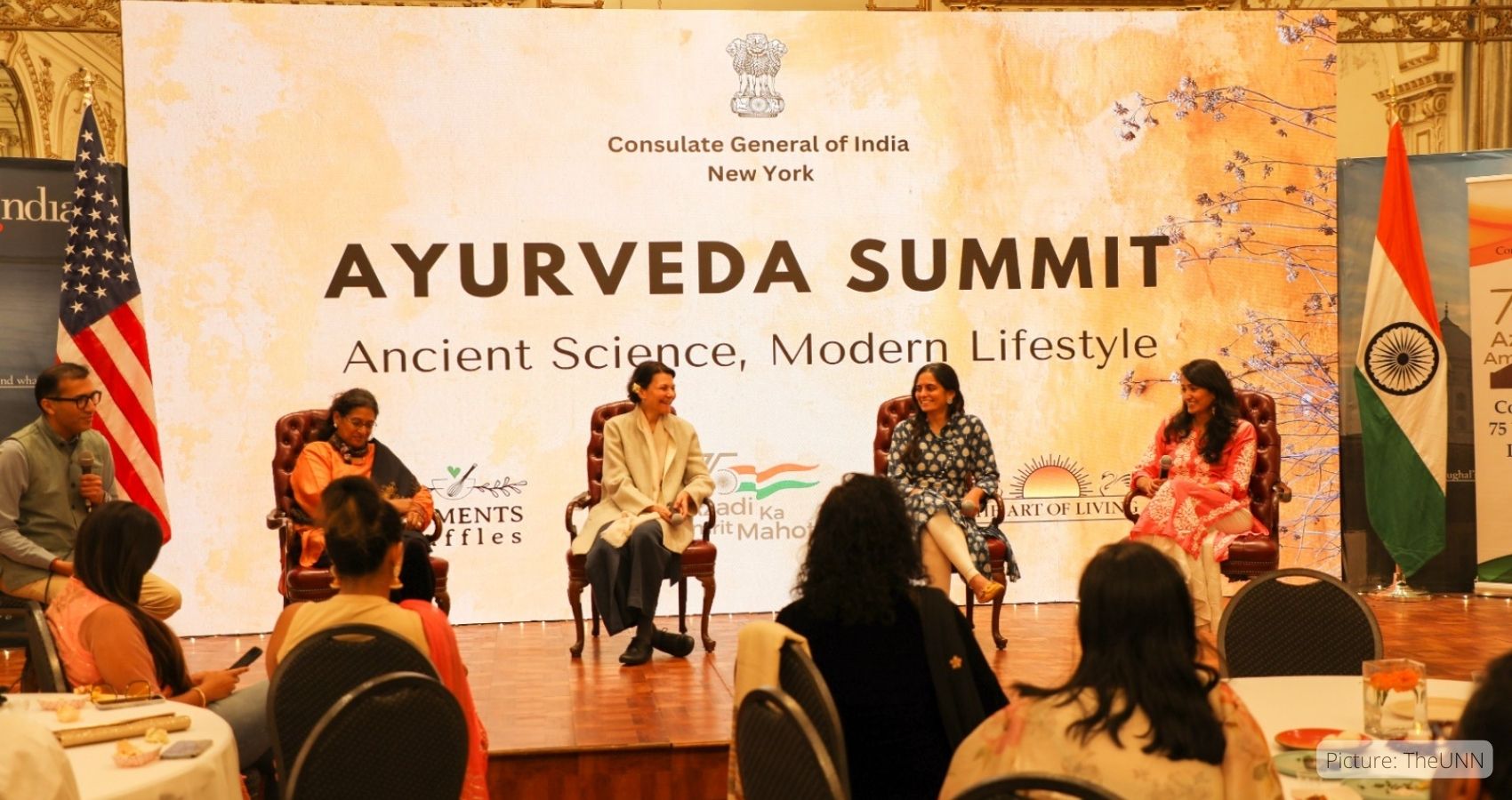 On the occasion of the 7th Ayurveda Day, Consulate General of India, New York, organized an ‘Ayurveda Summit’ on 29 October 2022. This year’s Ayurveda Day was celebrated with the theme “Har Din Har Ghar Ayurveda” so as to propagate the benefits of Ayurveda to a larger audience by underlining the centrality of families as the carrier of this ancient wisdom.

The event was organized as part of Azadi Ka Amrit Mahotsav, [email protected] series. The focus of the Summit was how to make Ayurveda appealing for the young generation which has meaningfully embraced holistic health and nature-based wellness as a way of life.  Prominent members of the community, media, yoga and Ayurveda practitioners and people from diverse backgrounds attended the Summit.

In his welcome remarks Consul General Mr. Randhir Jaiswal spoke on the growing popularity and acceptance of ayurveda in scientific terms. In this regard, he recalled the recently inaugurated World Health Organization’s Global Centre for Traditional Medicine in Jamnagar, Gujarat, India.  Noting that Ayurveda brings people closer to nature, he urged the audience to adopt Mission LIFE – that is Lifestyle for Environment – and support the cause of planet Earth.

Prime Minister of India Shri Narendra Modi has recently launched Mission LIFE calling upon each and every member of the global community to contribute towards the well-being of the planet.

The program began with yoga, breathing and short meditation session led by Mr. Eddie Stern, a well-known yoga teacher, author and lecturer. Following this, a panel discussion was held on the topic – Ayurveda – From the Outside to Within – A timeless, universal science, moderated by Ms. Ruchika Lal.

Pacemakers are usually given to those who have lived a long life and now their heart needs an extra assistance. For me, I was born with a heart defect,” Shree, 26, wrote.

Indian-American model Shree Saini, who was declared the first runner-up at the Miss World 2021 pageant, recently revealed that she is undergoing heart surgery for a new pacemaker implant as her “current pacemaker batteries have died”. A heart patient, Shree, who got a pacemaker at the age of 12, went on to share that she has to “undergo a total of eight pacemaker replacement surgeries” in her lifetime.

“I would so greatly appreciate your prayers. There will be no visitors allowed at the hospital. I want to thank everyone who has been there for me. For those who may not know, I was born with a complete heart block, where my upper and bottom chambers did not communicate with each other. My block led me to me having a very low heart rate and feel terribly fatigued,” she mentioned in a note on Instagram.

“The pacemaker paces my heart to beat at a normal rate. It does this by using the pacemaker to send electric shocks to my heart which allows it to beat at a normal rate. Average age of a pacemaker recipient is age 80. Pacemakers are usually given to those who have lived a long life and now their heart needs an extra assistance. For me, I was born with a heart defect,” Shree, now 26, penned.

Adding that she is sharing her story to “encourage people to have a greater sense of hope even in their hardships”, she wrote, “Let’s rise up from our challenges with a victor, not a victim mindset.”

Shree, who was also adjudged Ambassador Beauty With Purpose at the 2021 Miss World, thanked her well-wishers for their constant support. “I still remember being a kid and being so confused, scared while waiting for my initial surgery. I do remember the teachers and peers who were there for me. I will forever be grateful for people who cared, reached out with comforting words and whose love filled me with strength. Thank you for keeping me in your thoughts. I am the sum of God’s blessings, parents’ unconditional love and the blessings of so many people. So grateful for scientists, doctors for creating this remarkable pacemaker technology, that literally allows me to live today!”

About the size of a pocket watch, artificial pacemakers are implanted under the skin through an incision in the chest. The device is connected to the heart through leads or wires that deliver electrical signals that regulate the heart’s activity. “Pacemakers are small machines placed to generate heart beats. When your heart beats slows down to less than 50-60 beats, with or without heart conduction tissue, it indicates damage to your heart’s wiring system, or in cases of heart failure where a patient’s heart do not beat in tandem to produce a good pulse or output, then the doctor recommends these small machines to improve the quality of life, said Dr Bipeenchandra Bhamre, consultant cardiac surgeon, Sir H. N. Reliance Foundation Hospital and Research Centre in Mumbai, adding that ECG and Holter monitoring tests help to determine the need of pacemakers.

According to the expert, two types of machines are widely used — single chamber and dual chamber — depending on the number of heart chambers affected. “Periodic check up, every year, is required to check for battery. Your doctor will recommend the type of machine better for you,” he said.

Dr Pankaj Batra, senior interventional cardiologist, Fortis Escorts Faridabad, told indianexpress.com that the PPI or Permanent Pacemaker Implantation procedure takes about an hour to be completed. “Permanent pacemaker insertion is considered a minimally invasive procedure. Transvenous access to the heart chambers under local anesthesia is the favored technique. It is not a surgery,” said Dr Batra, adding that “in case of congenital heart defects, pacemakers may be preferred for a long life.”

A National Center for Biotechnology Information (NCBI) review also suggested that the primary purpose of such a device is to maintain an adequate heart rate, either because the heart’s natural pacemaker is not fast enough, or there is a block in the heart’s electrical conduction system. “Modern pacemakers are externally programmable and allow the cardiologist to select the optimum pacing modes for patients on a case-to-case basis,” explained Dr Batra and further said that replacement is usually done after 10 to 15 years using a “minor procedure”.

While pacemakers can be temporary in cases of a heart attack, permanent pacemakers are used to control long-term heart issues. “Pacemaker can relieve some arrhythmia symptoms, such as fatigue and fainting. A pacemaker also can help a person who has abnormal heart rhythms resume a more active lifestyle,” mentioned the NCBI review. Agreed Dr Batra and mentioned that pacemakers are needed to “improve the quality of life”, and with minimal heart-related issues. (Courtesy: The Indian Express)

Indian American Sanjay Mehrotra, the CEO of Micron Technology has promised to invest $100 billion over the next 20 years which will be instrumental in the creation of thousands of jobs in New York.

In his LinkedIn post, Mehrotra said that he met President Joe Biden on October 28 and showcased Micron’s future plans and the creation of the largest semiconductor fabrication facility in Clay, New York.

Kanpur-born Indian-origin Mehrotra said in a LinkedIn post that he met US President Joe Biden, and showcased the future plans of his company and the creation of the largest semiconductor fabrication facility in the history of the US.

“Today, I was humbled to meet with President Biden, introduce him to some of the Micron team, and showcase Micron’s plans for our future megafab in Clay, New York. This $100B investment over the next two decades will create the largest semiconductor fabrication facility in the history of the United States,” he said in the post.

Mehrotra said in the post that their company will create 50,000 jobs in New York and will partner with local colleges, universities and community organisation to build the workforce. He said that they aim to make New York the hub of leading-edge semiconductor manufacturing.

he fabs, part of Micron’s manufacturing network, will create memory chips that can be used in the most demanding applications worldwide. “Clay, New York will be able to say with pride that they are home to some of the most advanced semiconductor facilities anywhere in the world. We are proud to drive a vision for high-tech manufacturing leadership here in America,” he said.

The company further stated in a release that it will invest $250 million in the Green CHIPS Community Investment Fund, with an additional $100 million invested from New York, with $150 million from local, other state and national partners. “To secure US leadership in semiconductor manufacturing, cultivate American innovation and ensure economic and national security, it is imperative we come together to build and transform a workforce for the future. Our commitments through the Community Investment Framework represent the first foundational steps toward Central New York’s transformation,” said Mehrotra on President Biden’s visit.

New York Governor Kathy Hochul said that the project’s $500 million community fund will sustain the region in the long term with investments in workforce, housing, and infrastructure.

Micron Technology is a Nasdaq-listed company that focuses on innovative memory and storage solutions.

Micron’s founder Sanjay Mehrotra was born in Kanpur, and completed his schooling from Delhi’s Sardar Patel Vidyalaya. He moved to the US at the age of 18, transferring from BITS Pilani to University of California, Berkeley. He earned his BA and MA degrees in Electrical Engineering and Computer Science from University of California. Mehrotra then enrolled in Stanford University for an executive business degree. He was awarded an honorary doctorate by Boise State University. Mehrotra also holds around 70 patents.