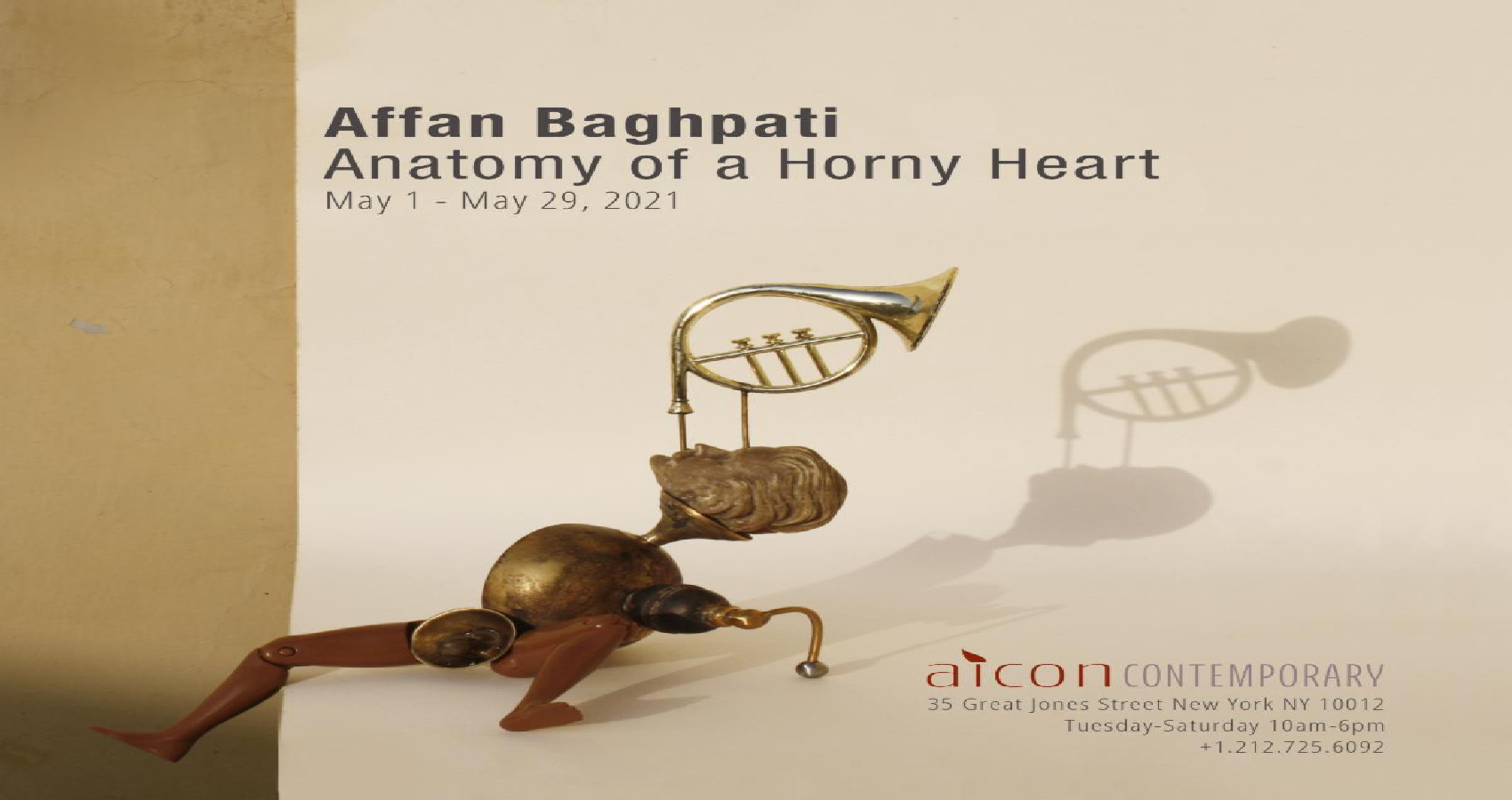 Aicon Contemporary in New York is presenting an exhibition of works by Affan Baghpati starting on May 1st, 2021. Affan Baghpati’s work has been described by Arushi Vats, distinguished contemporary art writer, who states, “In Affan Baghpati’s ‘objets terrible’-hybrid assemblages of metal, stone, plastic that stir memories and invite interpretations-the order which governs human sensing is profoundly troubled…These admixtures trick the eye into a search for convention as domestic objects, popular keepsakes, and memorabilia are encountered; then swiftly denies it such appeasement.”

In Affan Baghpati’s “objets terrible”—hybrid assemblages of metal, stone, plastic that stir memories and invite interpretations—the order which governs human sensing is profoundly troubled. Anatomies are disassembled as the plastic limbs of a doll are affixed to a metal dani (container) sprouting the head of a European composer, a small foetus emblem is bezeled on the side. Disparate parts of a constellation of unrelated yet proximate objects connect to make provisional the very notion of a stable whole. These admixtures trick the eye into a search for convention as domestic objects, popular keepsakes and memorabilia are encountered; then swiftly denies it such appeasement.

The composite is spliced to reveal divergent energies: a cat figurine looks sideways, quite literally, as its body is angulated, copper plates smoothening its messy innards; elsewhere the comforting figure of a pug is separated in two, connected by a glinting brass pipe. These are found objects, sourced by Baghpati from the local markets and tradespersons of Karachi, Lahore, Hyderabad, Gujrawala, Rawalpindi and Multan which makes these akin as commodities, things holding value, revolving in circuits of exchange. Yet these objects have tread variant paths, and are vehicles for distinct if not distant histories. A surmedani, a kohl container and applique, is a common if disused accoutrement in South Asian homes.

In Baghpati’s assemblages, you are as likely to encounter the elaborate head of a suramchi (the applique stick) carved with intricate patterns and symbols of national identity, as the opulent dani, the small pot that stores kohl or surma. A brass sarota (nutcracker) would rest in the paan dan (betel leaf box), often found in the hands of matriarchs such as Mumani in Ismat Chughtai’s short story Kallu, who is fastidiously cleaning it when a confrontation erupts.

Declining in usage and vanishing from material culture, these objects radiate a belated nostalgia, functional enough to not be saved as heirlooms, deeply entwined with the personality of their custodians. Baghpati remembers his grandmothers and their relationship with these objects, that enveloped within them many gestures, tehzeeb, dispositions of these women. It is the nature of traces to urge contact, a sabundani (soap box) implores you to bend forward and take a sniff; you can hear a snap in your head as you gaze upon a dog’s head attached to a brass clipper.

These objects enjoin with mass-produced “readymades” and European memorabilia to create humoredly, a statement on the asymmetrical networks of production, circulation and discarding that shape economies of consumption and waste: a doll manufactured in China is sold in Europe, and disposed to South Asia, where it blends with a “Made in Pakistan” surmedani, all this while travelling routes old and new, transforming in meaning and form.

Affan Baghpati is currently a lecturer at the Indus Valley School of Art and Architecture in Karachi. The artist is based in Karachi, Pakistan.  The exhibition is on view through May 29th. To view the works online, visit our exhibition exhibition page.