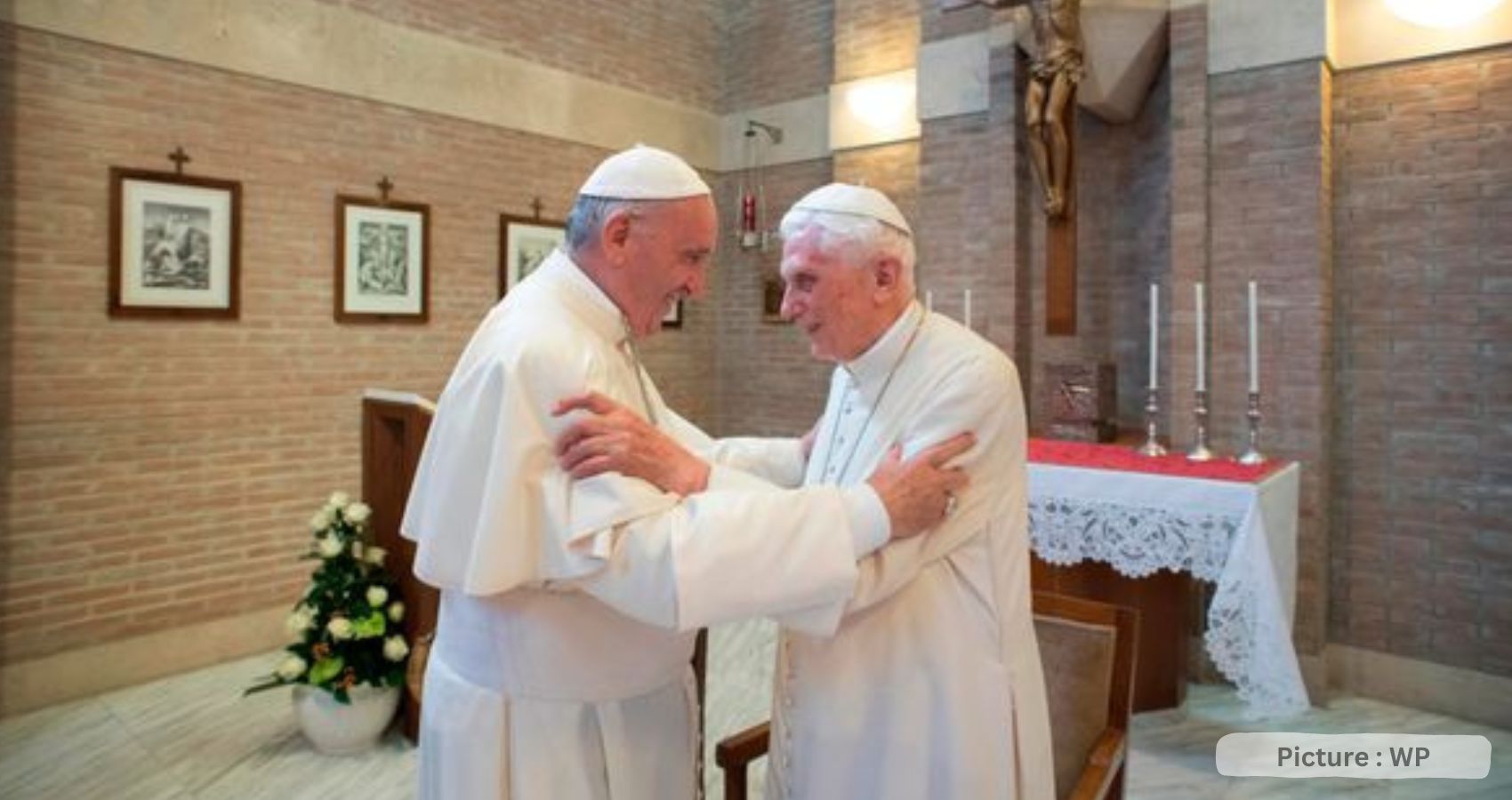 Pope Benedict XVI, the first pontiff to step down since the 15th century, died on Saturday,  December 31st, 2022 in Vatican City at age 95.

For several days, he had experienced declining health due to his advanced age, the Vatican press office said, with Pope Francis publicly sharing news of Benedict’s worsening condition earlier this week. Pope Francis will preside over Benedict’s funeral on Thursday at St. Peter’s Square, the Vatican said.

Born April 16, 1927, in Germany’s Bavaria, Joseph Ratzinger was a theologian by training. Following the death of Pope John Paul II in 2005, Ratzinger was elected his successor after serving for a quarter of a century as the Vatican’s top enforcer of orthodoxy. He was the first German pope since the 11th century.

Benedict broke centuries of tradition in which popes served until death, and the need to coexist with his predecessor has been a defining aspect of Francis’s tenure, coinciding with a period of growing polarization within the faith.

For traditionalists, Benedict became a symbol of opposition. Conservative figures in the church would seek audiences with him. Far-right politicians would quote him — or John Paul II — instead of Francis.

Intrigue about their relationship has been so intense that it even inspired a movie, “The Two Popes,” which imagined the two verbally sparring, and ultimately enjoying one another, in a period before Benedict’s abdication.

In a press release, the White House make known a statement from President Biden and his wife: “Jill and I join Catholics around the world, and so many others, in mourning the passing of Pope Emeritus Benedict XVI. I had the privilege of spending time with Pope Benedict at the Vatican in 2011 and will always remember his generosity and welcome as well as our meaningful conversation.

He will be remembered as a renowned theologian, with a lifetime of devotion to the Church, guided by his principles and faith. As he remarked during his 2008 visit to the White House, “the need for global solidarity is as urgent as ever, if all people are to live in a way worthy of their dignity.” May his focus on the ministry of charity continue to be an inspiration to us all.

The U.S. Department State said: “The United States mourns the passing of His Holiness Benedict XVI, Pope Emeritus — a holy man, witness to faith, and once Shepherd of the Catholic faithful. Pope Emeritus Benedict XVI was a dedicated leader and was committed to interfaith dialogue.  He was an advocate for vulnerable persons, including refugees, internally displaced persons, and migrants.  He supported international legal measures to defend them.  He was a renowned theologian within the Catholic Church for decades. We offer our deepest condolences to the Catholic faithful around the world, the Holy See, and all those whose lives were enriched by Pope Emeritus Benedict XVI’s spiritual guidance.”

French President Emmanuelle Macron said: “Pope Emeritus Benedict XVI has left us, having marked the Church with the seal of his theological erudition and working tirelessly for a more fraternal world.

Born Joseph Ratzinger in 1927, he grew up in a modest Bavarian family which taught him a love of the piano, letters, history, and the fierce rejection of any form of fascism. His parents also transmitted their deep piety to him, so much so that at the age of 7, little Joseph asked for a Missal and a priest’s chasuble as a Christmas present. But while his mind turned to the priesthood, that of his contemporaries allowed itself to be plagued by Nazism. Like all his generation, he had to submit to the Hitler Youth at fourteen, then at sixteen to military service. Ulcerated by the ambient fanaticism, the young man refused to integrate the Waffen-SS, deserted his regiment in favour of the debacle, but was recaptured, and spent six weeks in prison before the German capitulation freed him.”

“As a fellow countryman, this Pope bore a very special significance for us Germans also beyond the bounds of the universal Roman Catholic Church. For many people across the world, the election of a Pope from the home of the Reformation and of an intellectual who had made the dialogue between faith and reason his life’s work sent an important signal.

“The unity of Christendom, inter-faith dialogue and the coexistence of religion and society were matters particularly close to his heart. He sought dialogue with Jews and Muslims and with all Christian denominations throughout the world. High theological and philosophical concepts already combined with comprehensible language in the work of Professor Joseph Ratzinger. For this reason, many people, not only Roman Catholics, found clear orientation in his writings and addresses. He faced up to people’s searching and questioning.

The British Prime Minister said: “I am saddened by the news of the death of Pope Emeritus Benedict XVI. He was a great theologian whose visit to the United Kingdom in 2010 was a historic moment, both for Catholics as well as non-Catholics of our country. My thoughts today are with the Catholics of the United kingdom and of the whole world.

For his part, King Charles III, Successor of Queen Elizabeth II, wrote the following to Pope Francis: I received with profound sadness the news of the death of your Predecessor, Pope Emeritus Benedict XVI. I remember with fondness my meeting with His Holiness during my visit to the Vatican in 2009. His visit to the United Kingdom in 2010 was important in strengthening the relations between the Holy See and the United Kingdom.

I also recall his constant efforts to promote peace and goodwill to all people, and to strengthen the relationship between the global Anglican Communion and the Roman Catholic Church.  My wife and I send you our continued good wishes for your own pontificate.” 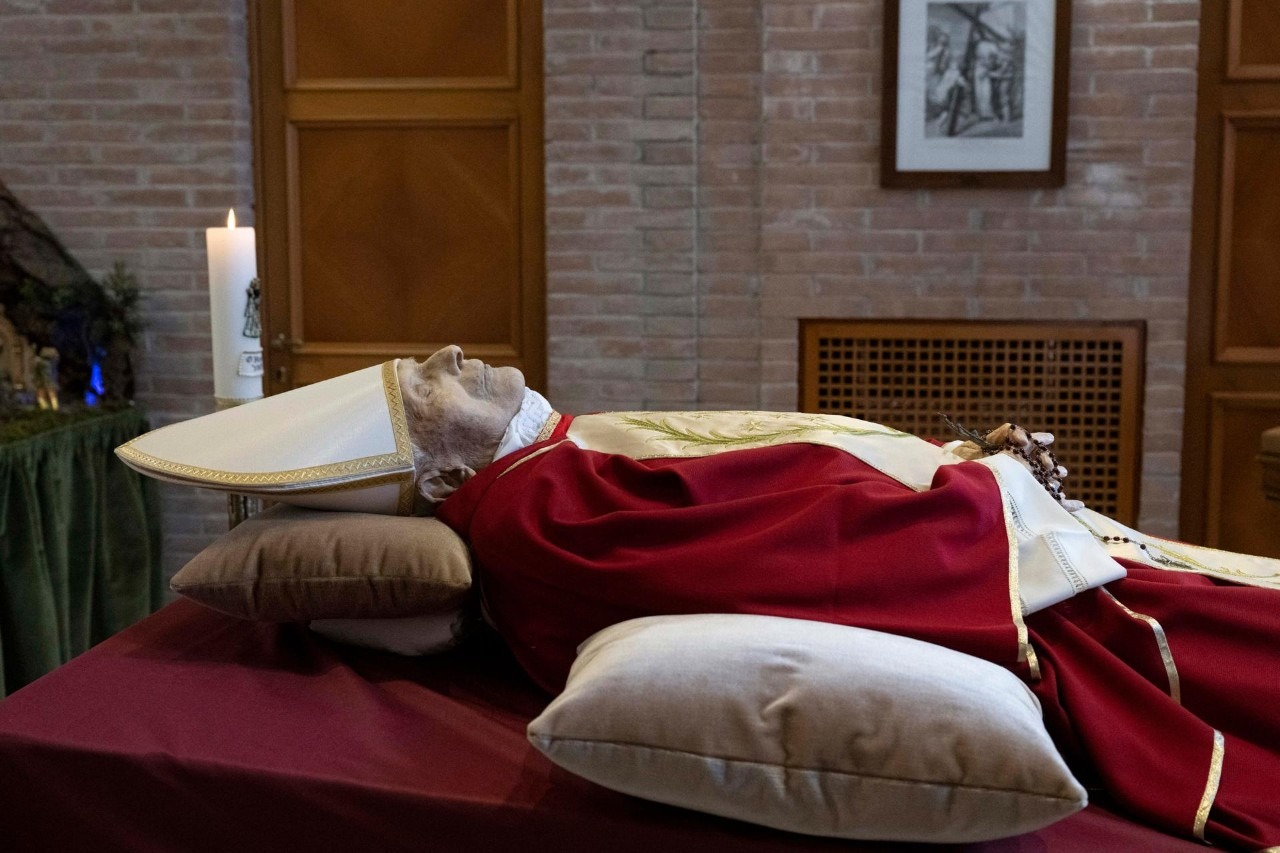 ate of the Anglican Communion. In a press release, he said:  “Today I join with the Church throughout the world, and especially with the Holy Father, Pope Francis, and all in the Catholic Church, in mourning the death of Pope Emeritus Benedict XVI.

In Pope Benedict’s long life and ministry of service to Christ in His Church he saw many profound changes in the Church and in the world. He lived through the Nazi regime in Germany and served briefly in the Second World War. As a younger theologian and priest he witnessed first-hand the discussions of the Second Vatican Council. As a professor and then as an Archbishop he lived in a divided Germany but saw, too, the fall of the Berlin Wall and the reunification of his homeland.”

Patriarch Kirill sent a message of condolences to Pope Francis. The gesture has been interpreted by the specialized press in the Vatican as a thawing in ecclesiastical relations given the war in Ukraine. “I received with sadness the news of the death of your Predecessor, Pope Emeritus Benedict XVI. The many years of life of His Holiness marked a whole period in the history of the Roman Catholic Church, which he led in a difficult historical period associated with numerous external and internal challenges.

Benedict XVI’s unquestionable authority as eminent theologian enabled him to contribute significantly to the development of inter-Christian cooperation, to the witness of Christ in face of a secularized world, and to the defense of traditional moral values.”

Church historian Massimo Faggioli said he believes that by approaching the world from a purely intellectual and theological perspective, Benedict’s papacy was ultimately a failure. “Because to be pope you are not the theologian-in-chief, you are the pastor-in-chief. That’s the magic of the papal office,” Faggioli said.

Yet the historian said the real legacy of Benedict’s papacy was how he ended it. “Benedict XVI’s decision to resign was a very radical interpretation of Vatican II,” Faggioli said. “Going beyond the letter of Vatican II, that was revolutionary.”

O’Connell of America magazine said that in Benedict’s final remarks to the cardinals before leaving the Vatican, he said his successor was among them. “He promised that he would give loyalty and obedience to his successor, and he respected that commitment in a total, absolute way,” the correspondent said. After Pope Francis was elected in March 2013, Benedict lived quietly in a residence on Vatican grounds.