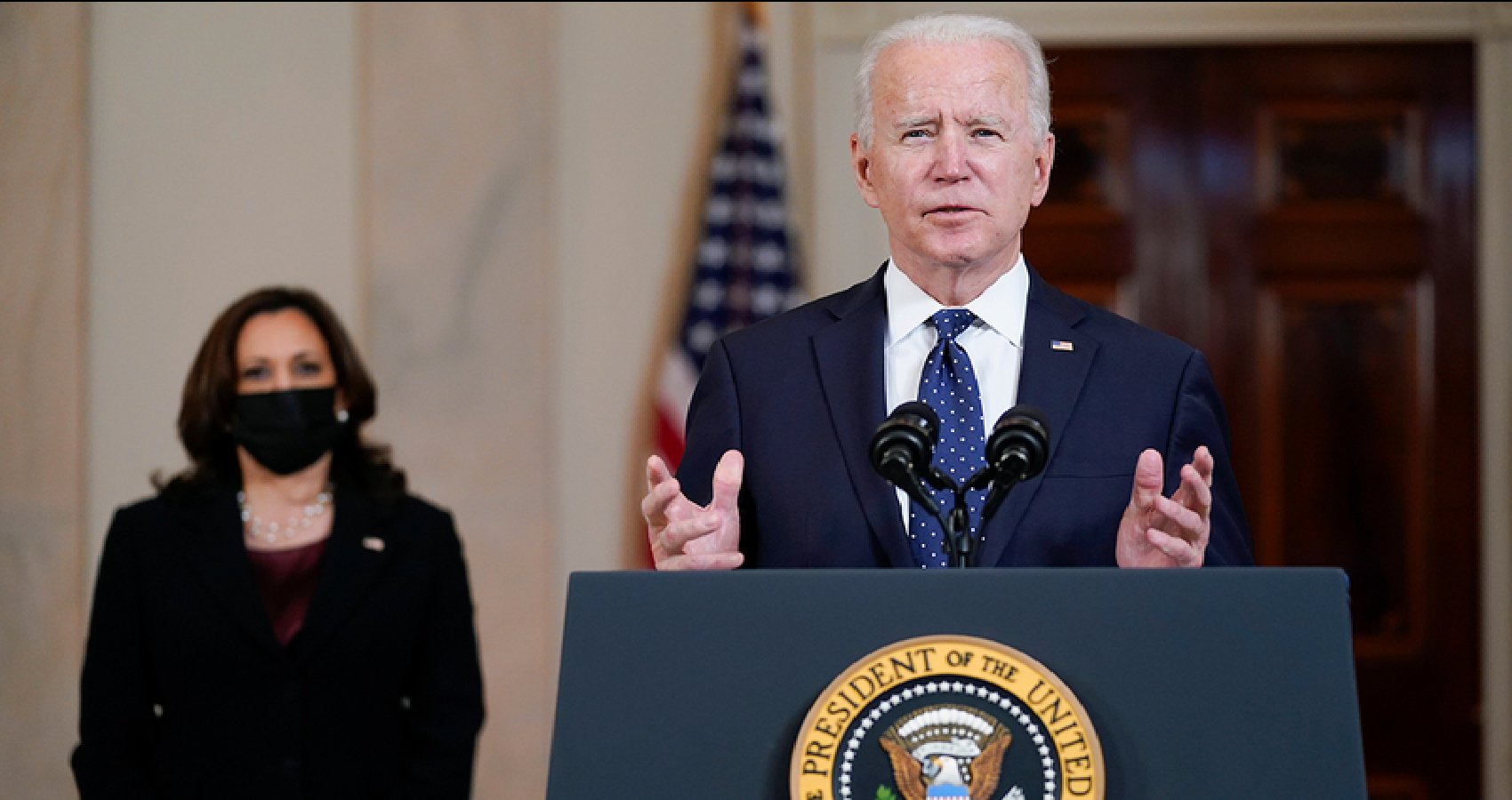 U.S. President Joe Biden marks his 100th day in office this week with a relatively strong job approval rating and the public continuing to express positive views of the coronavirus aid package passed by Congress last month. Moreover, nearly three-quarters of Americans (72%) say the Biden administration has done an excellent or good job managing the manufacture and distribution of COVID-19 vaccines to Americans.

A national survey by Pew Research Center was conducted on the Center’s nationally representative American Trends Panel from April 5-11, 2021 among 5,109 adults. It finds that the administration gets high marks for handling the manufacture and distribution of the COVID-19 vaccines.

Currently, 59% approve of the way Biden is handling his job as president, while 39% disapprove. Biden’s job approval rating has increased modestly from 54% in March. Biden’s job approval is comparable to several of his predecessors – including Barack Obama and George H. W. Bush – and much higher than Donald Trump’s in April 2017.

Views of Biden and his administration highlight several stark contrasts with opinions of his predecessor. Far more Americans say they like the way Biden conducts himself as president (46%) than say they don’t (27%), while another 27% have mixed feelings about his conduct. Similarly, 44% say he has changed the tone of political debate for the better, while 29% say he has made the tone of debate worse (27% say he has not changed it much).

In another report, ABC has found that Intense partisanship is holding Joe Biden to a tepid job approval rating — the third-lowest for any president at 100 days in office since Harry Truman — along with continued economic dislocation, pandemic impacts and questions about Biden’s view of the size and role of government.

Behind Biden’s overall rating is a range of varying assessments in this poll, produced for ABC News by Langer Research Associates. The president wins broad approval for his pandemic relief package, 65%; for his handling of the pandemic, 64%; and for his proposal to raise corporate taxes, 58%. But support for his $2 trillion infrastructure package slips to 52%, as does his rating for handling the economy; and he has just 37% approval for his work on the immigration situation at the U.S.-Mexico border.

More broadly, 53% express concern that Biden will do too much to increase the size and role of government in U.S. society. Relatedly, 40% see him as “too liberal,” more than either of his most recent Democratic predecessors at 100 days – Barack Obama, 33%, and Bill Clinton, 26%. (This rose for Obama later in his presidency.)

At the same time, public preference for smaller government with fewer services, at 48%, is its lowest in ABC/Post polls dating back nearly 30 years. Virtually as many, 45%, now favor larger government with more services — an opening, if not broad endorsement, for Biden’s call for a greater role for government in addressing social ills.

Overall, preference for larger government with more services is up 7 percentage points since last asked in August 2012, driven by increases among Democrats (+17 points), college graduates (+17), liberals (+15) and men (+8). It’s essentially unchanged among their counterparts.

Notably, too, while Biden’s overall rating lags in historical terms, it surpasses his immediate predecessor. Trump, the first president on record never to achieve majority approval, left office with a 38% job approval rating, 14 points below Biden’s today. Trump had the same 38% approval for his handling of the coronavirus — 26 points below Biden’s now.

By contrast, Biden’s rating for handling the economy is essentially the same as Trump’s in January, marking this as a clear challenge. Indeed, just 42% of Americans rate the economy positively, far below its pre-pandemic level; 58% instead say it’s in not-so-good or poor shape. Presidential fortunes often are closely linked to economic conditions.

On both questions, there are sizable differences in views of Biden and Trump. Last year, just 15% said they liked the way Trump conducted himself as president, which was little changed from telephone surveys dating to 2017. In both 2020 and 2019, majorities (55% on each occasion) said Trump had changed political debate in the U.S. for the worse.

While an overwhelming share of Democrats and Democratic-leaning independents (88%) say the administration has done an excellent or good job in managing the vaccine rollout, so too does a much smaller majority (55%) of Republicans and Republican leaners. Public support for the coronavirus aid package, which Biden signed into law a little more than a month ago, remains robust. More than twice as many Americans approve (67%) than disapprove (32%) of the $1.9 trillion aid bill. That is little different from the 70% who favored the economic aid package in March, shortly before it was enacted.

The Pew survey finds that, for the most part, the public’s views of major problems facing the U.S. are little changed from about a year ago. However, the share of Americans saying the coronavirus is a very big problem has declined 11 percentage points since last June (from 58% to 47%), while the share citing illegal immigration has increased 20 points (from 28% to 48%).

Over this period, Republicans and Democrats have moved in opposite directions in concerns about the federal budget deficit. Currently, 71% of Republicans say the budget deficit is a very big problem; about half of Republicans (49%) said this in June 2020. By contrast, just 31% of Democrats rate the deficit as a major problem, down from 45% last year.