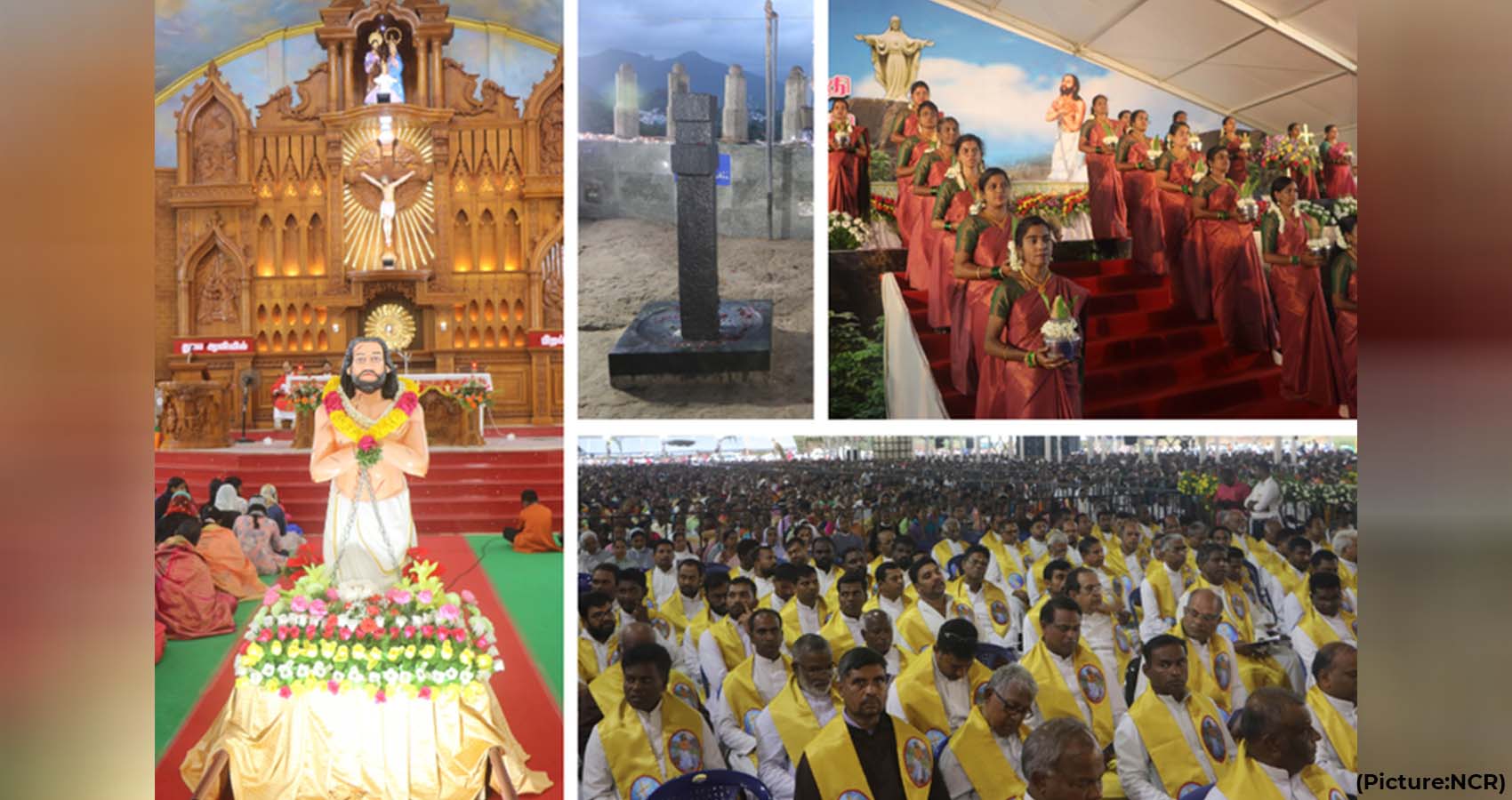 KOTAR, India — Hundreds of thousands of Catholics, along with three dozen bishops from across the country, attended the June 5 thanksgiving ceremony for the canonization of India’s first lay-martyr saint in the Kanyakumari district at the southern tip of India.

The Catholic-convert soldier, Devasahayam Pillai, who had been executed in 1752 at the age of 40 for refusing to recant his faith, was beatified in 2012 and canonized by Pope Francis along with nine others at the Vatican on May 15.

“We thank and praise God for the life and example of Devasahayam [who] … greatly regarded his dedication to God and service to humanity,” Archbishop Leopoldo Girelli, apostolic nuncio to India, said in his message during the public celebration of his canonization.

The celebration, including a solemn thanksgiving Mass, jointly hosted by the Dioceses of Kotar and Kuzhithurai, was held near the remote martyrdom spot of Devasahayam at Kattadimalai, where massive temporary housing had been erected on the slopes of the rocky mountain 11 miles from Kotar. Thousands of vehicles from all over Tamil Nadu parked near the venue reflected the massive crowd that came, highlighting the deep devotion of the faithful to the saint who has inspired some many.

The four-hour celebration started with a moving dance-drama, with hundreds of artists depicting the life and the martyrdom of the new saint, awing the crowd. 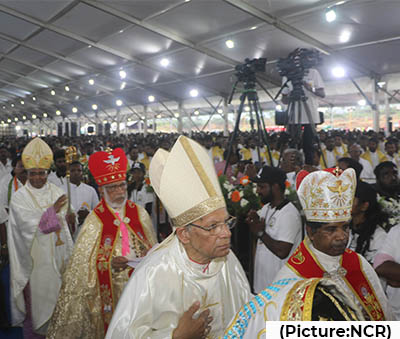 Indicating the esteem with which St. Devasahayam is revered, in attendance were four ministers of the Tamil Nadu state cabinet, led by the speaker of the state legislature, and Hindu leaders.

The name Devasahayam (in Tamil meaning “Lazarus, God has helped”) was given to the Hindu soldier Neelakandhan at the time of his baptism at the age of 33 by Italian Jesuit Father Giovanni Baptista Buttari.

The program included a solemn procession of the nuncio and three dozen bishops from across India, including Cardinal Oswald Gracias, president of the Catholic Bishops’ Conference of India, and Major Archbishop Cardinal George Alencherry of the Syro-Malabar Church, to the elaborately decorated altar.

“We are happy that, firstly, the canonization has ended the long wait we had,” Bishop Nazarene Soosai of Kotar told the Register.  “For me, the joy of the people about the canonization was incredible. The enthusiasm with which they turned up makes it a memorable day in the history of the Church here. It is going to have a tremendous impact on our people and life of the Church,” said Bishop Soosai

In addition to the crowd that gathered, millions of Catholics and other Christians watched the live telecast of the celebrations, according to the bishop. ers, and I am sure they have imbued the spirit of St. Devasahayam with this celebration. The witness and the way St. Devasahayam has inspired our people through decades gives us much hope, especially when freedom of religion is coming under increasing threats in the country,” Bishop Soosai explained.

The faithful remained, even as the thanksgiving Mass went beyond the 7pm hour.  “It was an unforgettable day in my life taking, part in this celebration,” Maria Devasahayam, a Hindu convert and teacher who shares the saint’s name, told the Register. The pilgrim traveled more than 25 miles to attend.

“My name had been included by the Church in the delegation to Vatican for the canonization. But my visa application was rejected, and I could not go,” the principal of a Catholic secondary school said, expressing regret at not being able to attend the May Mass in Rome.

“I was healed and baptized here,” said T. Krishnan, who had what he calls a miraculous healing in 1990 after being comatose for months at the age of 15, following months of failed treatment at several prominent hospitals.

Since his father, who died suddenly, was a Hindu priest, his mother rejected family members’ proposal to take him to the Devasahayam shrine at the martyrdom spot; this location is where dozens of sick people come, seeking cure from their maladies. 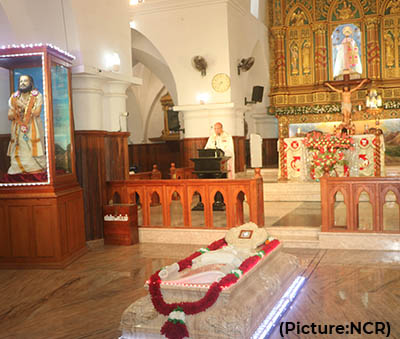 He recalled, “Finally seeing my pitiable condition of being carried around like a baby, my mother relented. It was after weeks of stay and prayer at the care center [at the martyrdom spot] I had a vision of a man in a beard coming and asking me for water. I told him, ‘I cannot walk.’ He said, ‘You can walk’ — and, amazingly, I walked, after months, to bring water for him. But he was gone. Only then I realized it was the saint.”

After weeks of catechism, Krishnan, his mother and two brothers received the sacrament of baptism. “More than 100 people, including my uncles and their families and neighbors, have become Christians after my miraculous healing,” said the teacher, who changed his name to Maria Devasahayam to honor the healing.

Elango Raja, a devoted Catholic who guided this correspondent to half a dozen key Devasahayam shrines spread out across 100 miles, said that his great-grandfather’s name was also Devasahayam.

“The devotion to the saint here is so deep-rooted that many families here will have one or more Devasahayam in them,” Raja said as we visited the popular shrine of Muttidichanpara at Puliyoorkurichi, which commemorates where water was said to have gushed out when a bleeding St. Devasahayam knelt and prayed for water during his torture. He was forced to travel on buffalo back — in chains — to humiliate him for his refusal to forsake the Christian faith.

Dozens of devotees could be seen coming to the rock stream to drink and take home the holy water from the rock that now has a grand church erected behind it.

“St. Devasahayam heals, inspires and blesses his devotees,” said Kanakraj Cangan, a Catholic architect who designed one of the most popular Devasahayam sculptures around the beatification in 2012.

“Since I did that work, my life has bloomed with fame and invitations for designing churches and statues,” said Cangan, standing near the statue of Devasahayam he made at Muttidichanpara. In fact, Cangan also designed the shrine church; in addition, he has designed a dozen churches in the decade since the beatification.

Each of the key shrines dedicated to St. Devasahayam has a trademark symbol: a plain black granite cross labeling the spot.

Scores of pilgrims flock to popular shrines linked to the life of this lay saint. His house in Nattalam is a popular tourist center, containing a museum along with a chapel and parish church across the road.

A huge portrait of Devasahayam stands near the entrance of the old Holy Family Church at Vattankulam, where Father Buttari baptized him in 1745.

A large statue depicting Devasahayam in chains is present in the middle of Holy Family Church at Ramanputhoor; the church is said to have been built upon one of the imprisonment spots of Devasahayam. The saint had a vision of the Holy Family while in detention there.

Devasahayam had been repeatedly moved to new locations to avoid the crowds coming to see him during the three years of his detention; throughout his imprisonment, he was always in chains, as embodied by his depiction in statues.

Devasahayam was executed in secret, due to his popularity, his body dumped from the rocks of Kattadimalai for the wild animals to eat.

The saint’s remains were buried after his followers discovered his body days after his death. His tomb is housed at St. Francis Xavier Cathedral in Kotar and draws a steady stream of devotees daily.

“In India’s first lay saint and martyr Devasahayam, the faith sparkles, as seen in his eyes,” remarked Cardinal Gracias, while recording a tribute to the saint while standing before his tomb on June 6.

As his name suggests, “God has helped” and blessed the southern tip of India.

The seed of Christianity was first sowed by St. Thomas the Apostle, supplemented by St. Francis Xavier in the 16th century, and enriched and flourished by the heroic witness and martyrdom of Devasahayam in the 18th century.

Said Joseph Robert, who runs a printing business comprised of books, audio-visual productions and memorabilia of the saint in Kotar, where more than 50% of the population is Christian, “St. Devasahayam is certainly the focal point of Christian life here.”