Notice: register_sidebar was called incorrectly. No id was set in the arguments array for the "Homepage Sidebar" sidebar. Defaulting to "sidebar-4". Manually set the id to "sidebar-4" to silence this notice and keep existing sidebar content. Please see Debugging in WordPress for more information. (This message was added in version 4.2.0.) in /home/universalmirror/public_html/theunn.com/wp-includes/functions.php on line 5311
 200 Nations Agree On Pact To Save Earth From Climate Change Glasgow Climate Pact Diluted After India, China Force Amendment On Emission From Coal - Universal News
Skip to content 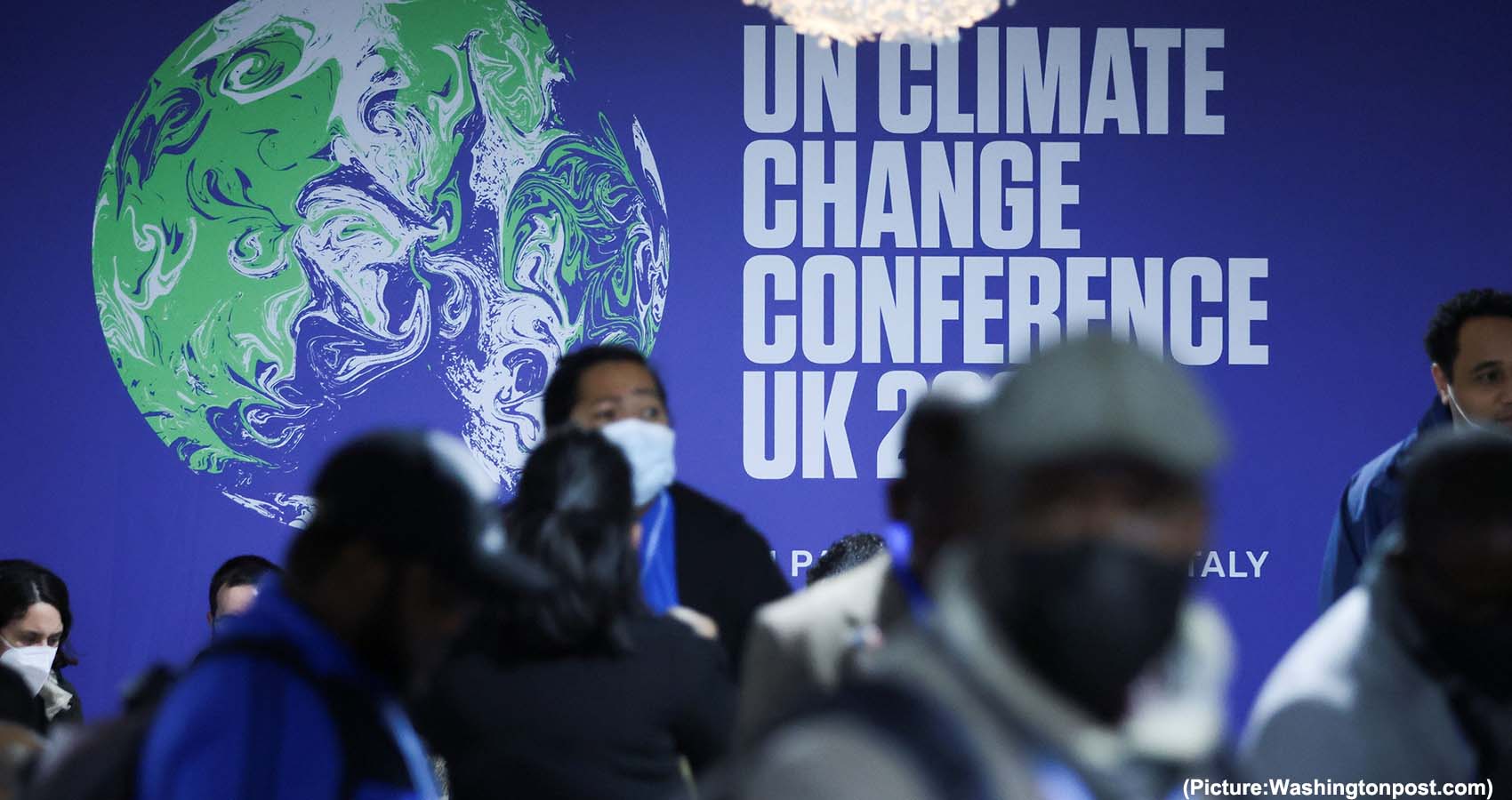 The two-week global conference ended with a historic agreement between the 200 national delegations who agreed to, for the first time, to target fossil fuels as a key driver of global warming in a bid to halve greenhouse gas emissions by 2030 and net zero emissions by 2050 in an effort to limit global warming to 1.5 degrees Celsius above pre-industrial levels.

The historic and much needed Glasgow Climate Pact 2021 was adopted on Saturday, November 13th, which is a mixed bag of modest achievements and disappointed expectations. The achievements include a tacit consensus on a target of keeping global temperature rise down to 1.5 degrees Celsius with the Paris Agreement target of 2 degrees being no longer appropriate to the scale of the climate emergency. The notional target of 2 degrees remains but the international discourse is now firmly anchored in the more ambitious target and this is a plus.

The Pact is the first clear recognition of the need to transition away from fossil fuels, though the focus was on giving up coal-based power altogether. The focus on coal has the downside of not addressing other fossil fuels like oil and gas but a small window has opened.

Even as the UN Secretary General Antonio Guterres conceded that the final agreement was “a compromise”, several vulnerable nations were left disappointed as the deal made no mention of the $100 billion a year in funding that high-income countries had promised, in 2009, for five years starting 2020 to help low-income countries move away from fossil fuels. While the UN will come out with a report next year on the progress of delivering the funding, the issue of finance will now be taken up only in 2024 and 2026.

“This is just a very small step forward. The pace is extremely slow. We are moving in inches when we need to gallop in miles,” said Harjeet Singh, senior advisor with Climate Action Network International, a large group of NGOs working in climate space.

The original draft had contained a pledge to “phase out” coal. India introduced an amendment at the last moment to replace this phrase with “phase down” and this played negatively with both the advanced as well as a large constituency of developing countries. This was one big “disappointment”. 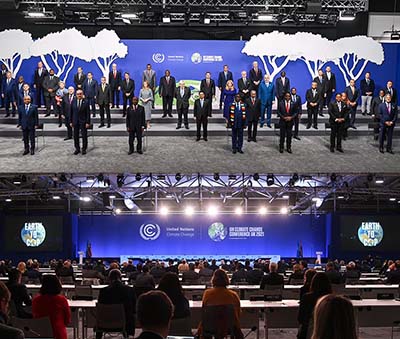 This amendment reportedly came as a result of consultations among India, China, the UK and the US. The phrase “phase down” figures in the US-China Joint Declaration on Climate Change, announced on November 10. As the largest producer and consumer of coal and coal-based thermal power, it is understandable that China would prefer a gradual reduction rather than total elimination. India may have had similar concerns. However, it was inept diplomacy for India to move the amendment and carry the can rather than let the Chinese bell the cat. The stigma will stick and was unnecessary.

Prime Minister Narendra Modi had taken centerstage at Glasgow during its early high-level segment thanks to the absence of Xi Jinping. His commitment to achieving net-zero carbon by 2070 compared favorably with China’s target date of 2060. His announcements of enhanced targets for renewable energy were also welcomed. However, the favourable image wore thin by the end of the conference with India declining to join the initiatives on methane and deforestation. India’s ill-considered amendment on the phasing out of coal pushed the positives of its position off the radar.

According to India’s environment minister Bhupender Yadav, the change in phraseology was reflective of “national circumstances of emerging economies” as the agreement had initially “singled out” coal but was turning a blind eye to emissions from oil and natural gas, with the final agreement reflecting a “consensus that is reasonable for developing countries and reasonable for climate justice.”

According to UNEP, adaptation costs for developing countries are currently estimated at $70 billion annually and will rise to an estimated $130-300 billion annually by 2030. A start is being made in formulating an adaptation plan and this puts the issue firmly on the Climate agenda, balancing the overwhelming focus hitherto on mitigation.

There is now a renewed commitment to delivering on this pledge in the 2020-2025 period and there is a promise of an enhanced flow thereafter. But in a post-pandemic global economic slowdown, it is unlikely these promises will be met. In any event, it is unlikely that India will get even a small slice of the pie. As long as ambitious targets are not matched by adequate financing, they will remain ephemeral.

The same applies to the issue of compensation for loss and damage for developing countries who have suffered as a result of climate change for which they have not been responsible. This is now part of the multilateral discourse and the US has agreed that it should be examined in working groups. That is a step forward but is unlikely to translate into a meaningful flow of funds any time soon.

The most important is an agreement among 100 countries to cut methane emissions by 30 per cent by 2030. India is not a part of this group. Methane is a significant greenhouse gas with a much higher temperature forcing quality than carbon — 28 to 34 times more — but stays in the atmosphere for a shorter duration.

Another group of 100 countries has agreed to begin to reverse deforestation by 2030. Since the group includes Brazil and Indonesia, which have large areas of forests that are being ravaged by legal and illegal logging, there is hope that there will be progress in expanding one of the most important carbon sinks on the planet.

Going beyond the Glasgow summit and climate change, a noteworthy development was the US-China Joint Declaration on Climate Change. This was a departure for China, which had held that bilateral cooperation on climate change could not be insulated from other aspects of their relations. The November 10 declaration implies a shift in China’s hardline position but this may be related to creating a favourable backdrop to the forthcoming Biden-Xi virtual summit on November 15. US Climate Envoy John Kerry and China’s seasoned climate negotiator, Xie Zhenhua, were seen consulting with each other frequently on the sidelines of the conference. It appears both countries are moving towards a less confrontational, more cooperative relationship overall. This will have geopolitical implications, including for India, which may find its room for manoeuvre shrinking.

How should one assess the Glasgow outcome?

There is more ambition in the intent to tackle climate change but little to show in terms of concrete actions. These have been deferred to future deliberations. Enhanced Nationally Determined Contributions (NDCs) are expected to be announced at a meeting next year and further deliberations are planned on the other pledges related to Adaptation and Finance. There are no compliance procedures, only “name and shame” to encourage delivery on targets. As in the past, the can has been kicked down the road, except that the climate road is fast approaching a dead-end. What provides a glimmer of light is the incredible and passionate advocacy of urgent action by young people across the world. This is putting enormous pressure on governments and leaders and if sustained, may become irresistible.

Glasgow delivered some important successes. In response to the demands from the developing countries, and in keeping with the commitment of Paris Agreement, a new process has been initiated to define a global goal on adaptation. The Paris Agreement has a global goal on mitigation, defined in terms of temperature targets. It seeks to reduce greenhouse gas emissions in amounts sufficient to keep the rise in global temperatures to within 2 degree Celsius from pre-industrial times, while pursuing efforts to limit this under 1.5 degree Celsius.

But a similar goal for adaptation has been missing, primarily because of difficulties in setting such a goal. Unlike mitigation efforts that bring global benefits, the benefits from adaptation are local or regional. There is no uniform global criteria against which adaptation targets can be set and measured.

In a big concession to major economies like India, China or Brazil, the COP26 has allowed old carbon credits, earned under the Kyoto Protocol mechanisms, to be traded in the new carbon market being set up, provided these credits have been earned after 2012. Countries have been allowed to use these credits to achieve their emission reduction targets till 2025.