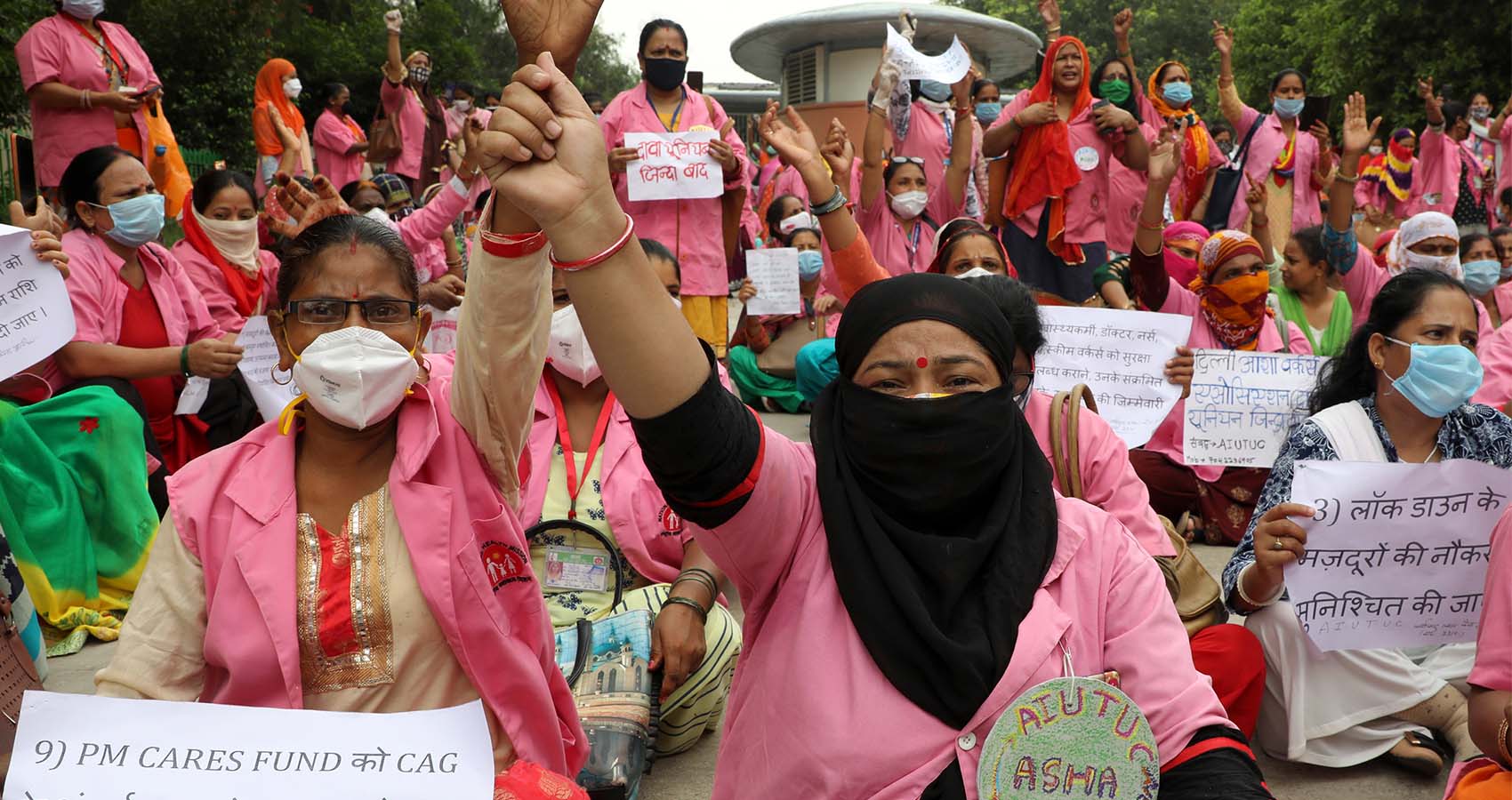 India’s task force of over a million female health-care workers has won a prestigious award from one of the highest institutions in global health. Unfortunately, it doesn’t come with a cash prize. “Awards don’t fill stomachs,” says Archana Ghugare, 42, a health-care worker from Pavnar, a village in the state of Maharashtra.

Ghugare works as an ASHA, short for Accredited Social Health Activists. It’s a program run by India’s Ministry of Health and Family Welfare that provides health care to rural and low-income communities in the country. They are not medical professionals but are entrusted with a long list of crucial health-care responsibilities, from advising new mothers about breastfeeding to raising awareness about COVID vaccines.

On May 22, the ASHA workers were named one of six recipients of the World Health Organization’s Global Health Leaders Awards — sharing the honor with such luminaries as the late Dr. Paul Farmer. The annual prize, created in 2019, recognizes individuals and groups that have made significant contributions to global health.

But while an honor is satisfying, the pay for these workers is not. They earn around $60 a month on average and have few benefits. In recent years, the government has raised monthly pay by a few tens of dollars, but workers say this is still too low. Many ASHAs, as the workers are known, and those in the global health community hope this moment can put pressure on the government to bump up their salaries, among other job improvements.

Indeed, pay equity has been an ongoing issue. Over the past two years, ASHAs across India have held several protests, including one during the pandemic in 2020, demanding better wages and safer working environments. 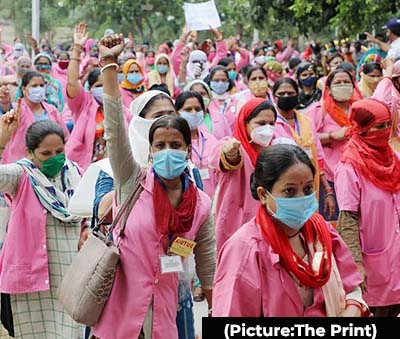 Despite their dissatisfaction with pay, many ASHAs take great pride in their work. True to the spirit of their acronym (asha means “hope” in some Indian languages), the workers represent hope for better health care, particularly for many of India’s underserved populations.

NPR spoke to three ASHAs about their day-to-day tasks and aspirations — and their reaction to the WHO honor.

‘We aren’t asking for much’

Ramrati Chauhan, a community health worker from the city of Palwal, keeps a diary of inspiring stories about the people she’s helped. She reads it when she feels disheartened about her job.

Ramrati Chauhan, a 42-year-old ASHA from the city of Palwal in Haryana state, says she gets very attached to the pregnant women she assists.

One time, a woman suddenly went into labor. Chauhan, who is not a midwife, couldn’t reach the woman in time to get her to a hospital — and the woman lost her baby due to complications. “I felt deep remorse” for not being able to help her, says Chauhan.

So when the woman became pregnant again, Chauhan made sure to visit her every day for the entire nine months of her pregnancy — and counseled her repeatedly about childbearing do’s and don’ts. There were complications during that delivery too — but this time Chauhan was there to get the woman to the hospital on time, and she gave birth to a healthy baby boy.

“When I pass their house now, the woman points to me and tells her son, ‘That’s your mother too. She saved your life,’ ” says Chauhan. Chauhan says she writes down important moments like these in a diary to read when she feels disheartened about her job.

“We have to struggle [with the government] to get a raise of even $20 to $25” a month, she says. She currently makes about $100 a month. Payment varies across states and depends on how many additional duties a worker carries out.

And when the pandemic first started, she says the government didn’t give her much safety equipment — even though she had to check on people who had tested positive for COVID. “We sewed our own masks,” she says.

The WHO award isn’t a first for ASHAs, says Chauhan, adding that local governments and municipalities have honored them several times. True recognition, she says, would be if the government recognizes ASHAs as full time workers instead of volunteers, and provides them with a steady salary, pension and other benefits.

“We aren’t asking for much,” Chauhan says. “Only what is commensurate with our hard work.”

‘People trust me because I’m an ASHA worker’

When the ASHA program began in 2005, the health workers were envisaged as volunteers working about 2 to 3 hours a day and a bit extra on some days, according to the National Health Mission, a program that’s part of India’s Ministry of Health. But over the years, ASHAs say their responsibilities have increased multifold.

At the peak of the coronavirus pandemic, Archana Ghugare says she was working 14 hours a day. And even today, she’s got a full workload. She’s been going door-to-door to identify people in the community who have a variety of medical needs, from pregnant people to kids under the age of 14 eligible for COVID vaccinations.

“If the government is getting so many things done from us, shouldn’t we get something in return?” asks Ghugare. Payments are frequently late, she says, sometimes by as much as 6 months. She’s worried about how she’ll pay for the education of her two daughters, one of whom has a speech and hearing disability.

In tough times Ghugare tries to remember why she started doing this job in the first place. Several years ago, a dying HIV-positive woman told Ghugare her last wish — for Ghugare to take care of her young daughter. After the woman’s death, Ghugare didn’t adopt or raise her, but gathered donations from villagers to fund the girl’s education. Now she’s 22 and studying to be a nurse, says Ghugare. “People trust me because I’m an ASHA worker, and that trust shouldn’t be broken,” she says.

‘We are being exploited’

Veena Dyani says there’s so much work she has to do as an ASHA that she sometimes asks her older children to help her complete her paperwork.  Veena Dyani, a 37-year-old ASHA from Nainidanda at the foot of the Himalayas, has a packed schedule.

Her day typically starts at 4 a.m. After preparing meals for her three older children and her in-laws who live with her, she sets out for home visits. Routine duties include weighing newborns and handing out vitamin and folic acid tablets to pregnant women.

To do her job, she sometimes has to enlist the aid of others. In the hilly jungles around Dyani’s remote village, there’s risk of attacks by wild animals. So whenever she has to walk through the woods to visit households on the other side, she pays a villager from her own pocket to accompany her for safety.

And if her kids don’t have schoolwork, they help out, too. At the end of the workday, Dyani has to organize the data she’s collected on her patients — what ailments they have, what treatments they need and demographic details, for example. Her children, ages 15, 17 and 20, sometimes write the data in notebooks to be submitted to her bosses.

Lately, her boss has been asking her to file this information online and take photos of the health-care meetings she holds in the community.

This frustrates her. “How [are we supposed to] do this online work? Not all ASHAs have money to buy a good enough smartphone,” says Dyani, who uses a basic cellphone. Only some states provide ASHAs with smartphones. Many years ago a politician in her state had promised to provide tablets to the ASHAs — but that hasn’t happened, she says.

To make matters worse, the last time she received a payment, about $65, was in February. She’s a widow, so she really needs the money to support her family.

“We are being exploited,” she says, adding that she could probably make more as a day laborer. But she sticks around, she says, because she likes the work.

When news of the WHO award broke, her WhatsApp group of ASHAs lit up with congratulatory messages. Recognition or no recognition, she says she will continue to do her job — and raise her voice for her rights. “The ASHA herself [can’t] lose hope,” she says.