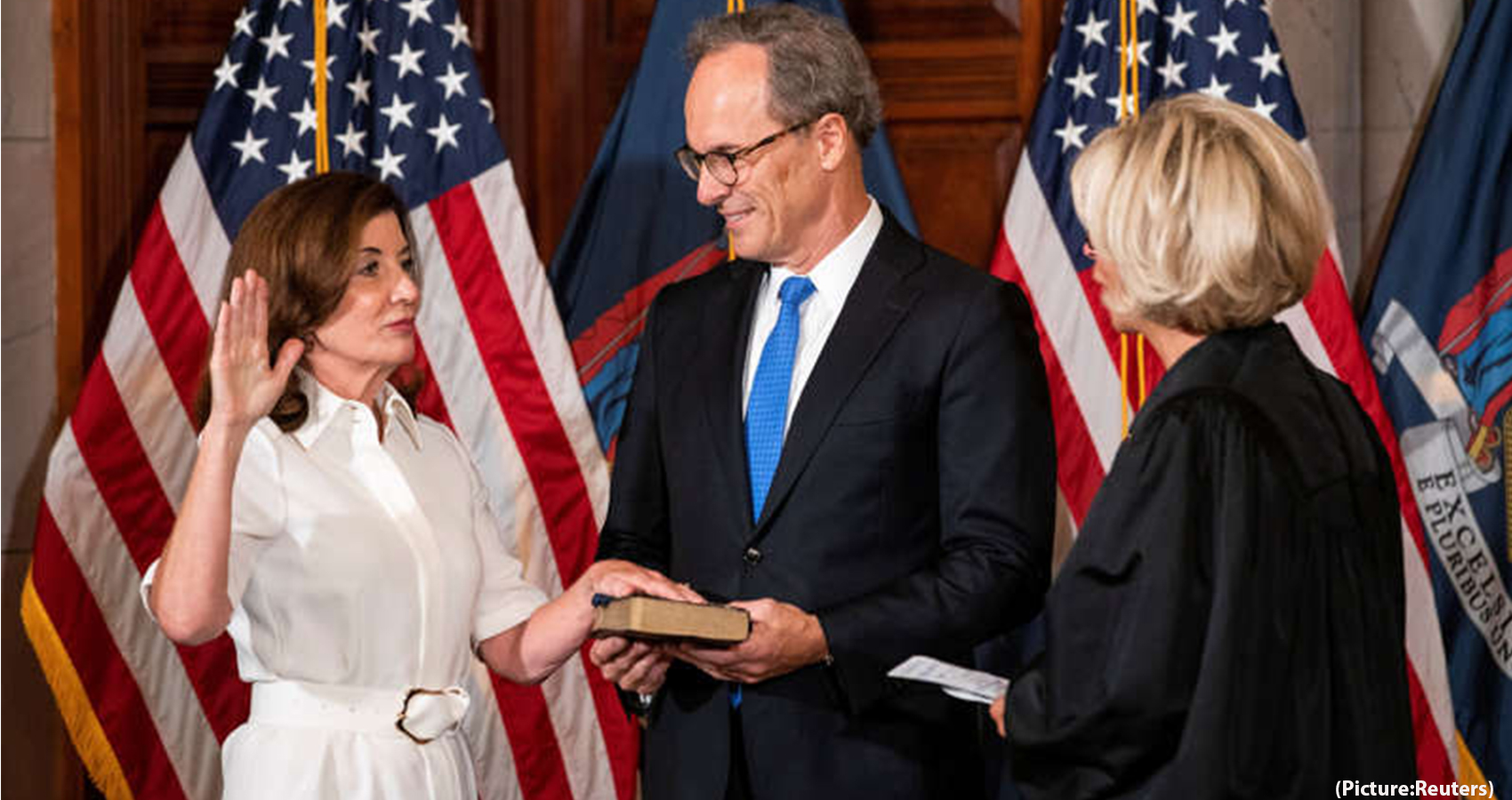 Kathy Hochul was sworn in as New York’s first-ever female governor of the state of New York, on August 25, 2021, as the state prepares to move on from the decade-long tenure of the embattled Andrew Cuomo. After Cuomo’s resignation became official at 11:59 p.m.. At 12:01 a.m, by the state’s chief judge, Janet DiFiore, Hochul has sworn as first woman Governor of New York. Tuesday in the State Capitol in Albany. 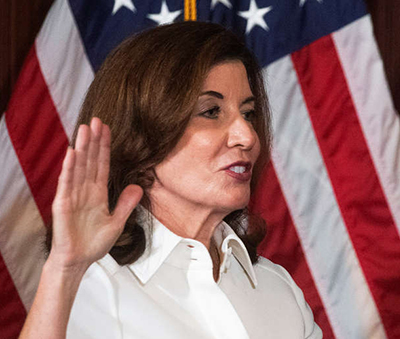 “I’ll tell New Yorkers I’m up to the task. And I’m really proud to be able to serve as their governor and I won’t let them down,” she said. Hochul’s ascent to the top job was a history-making moment in a capital. Where women have only recently begun chipping away at a notoriously male-dominated political culture. Kathy Hochul, serving as New York’s lieutenant governor, has catapulted into the national spotlight when Gov. Andrew Cuomo abruptly announced his resignation amid a growing sexual harassment scandal 2 weeks ago.

A more formal ceremonial swearing-in took place Tuesday at 10 a.m. Along with Hochul’s family members and the state’s two other top politicians, Assembly Speaker Carl Heastie and Senate Majority Leader Andrea Stewart-Cousins, in attendance as she took the oath of office. “This is an emotional moment for me. But it is one that I’ve prepared for,” the first woman Governor of New York said afterward. The trio of top politicians in Albany has for decades been known as the “three men in a room,” famous for cutting closed-door deals on legislative and budget matters. With Hochul joining Stewart-Cousins in top posts, the dynamic now becomes two women and a man.

For the first time, a majority of the most powerful figures in the New York state government will be women, including state Senate Majority Leader Andrea Stewart-Cousins, Attorney General Letitia James, and the chief judge, DiFiore. The state Assembly is led by a man, Speaker Carl Heastie. Hochul, the first woman Governor of New York said she was meeting with the pair right after the swearing-in. And told reporters she’d also spoken with President Joe Biden and they discussed a “number of issues”. “He pledged his full support for my administration,” she said. Also, Hochul said that she is ready to lead New York, which is still battling the Covid pandemic. Also is in the midst of a fragile economic recovery.

Hochul, the first woman Governor of New York, 62, is the ninth woman currently serving as a governor across the United States, which ties a record set in 2004. Also,  she made her first formal address as governor Tuesday afternoon. There she laid out her priorities, including a mask mandate and a vaccine requirement for all school personnel. Along “with an option to test out weekly, at least for now” .“As someone who has served at all levels of government and is next in the line of succession. I am prepared to lead as New York State’s 57th Governor,” she said. Cuomo’s resignation comes after an independent investigation. It has overseen by state Attorney General Letitia James. Thus concluded there was credible evidence he’d sexually harassed at least 11 women.

In his farewell remarks, Cuomo struck a defiant tone, saying the attorney general’s report that triggered his resignation has designed to be “a political firecracker on an explosive topic, and it did work. Also, there was a political and media stampede,” he said. Cuomo’s resignation won’t end his legal problems. Also, an aide who said Cuomo groped her breast has filed a complaint with the Albany County Sheriff’s Office. Separately, Cuomo was facing a legislative investigation into whether he misled the public about COVD-19 deaths in nursing homes to protect his reputation as a pandemic leader. Even, improperly got help from state employees in writing a book that may net him $5 million.

U.S. Senate Majority Leader Chuck Schumer on Tuesday said, he spoke to Hochul and he has “full confidence” that she will create a “professional and capable administration.” New York’s junior U.S. senator, Kirsten Gillibrand said that Hochul will be an “extraordinary governor.” “She understands the complexities and needs of our state having been both a congresswoman and having been lieutenant governor for the last several years,” Gillibrand said.

“She is ready and able and capable of being an extraordinary first woman Governor of New York. Also, I look forward to supporting her and helping her as she turns towards governing our state, in a very difficult and challenging time,” the senator said. In 2011, Hochul has elected to Congress in a largely Republican district that spanned from Buffalo to Rochester, according to the Times profile.

Hochul became the first Democrat to represent the district in 40 years. And her victory has viewed as a referendum on Republican plans led by Paul Ryan, the former speaker of the House of Representatives, to bankrupt Medicare, according to her campaign website. After Hochul has defeated in her campaign for reelection to Congress in 2012. she has tapped by Cuomo to be his running mate during his first reelection campaign as governor.

Hochul will need to quickly build her own team of advisers to steer the administration for at least the next 16 months. Hochul, who said she didn’t work closely with Cuomo. And hasn’t aware of the harassment allegations before they became public. Then he has vowed no one will ever call her workplace “toxic”. “I have a different approach to governing,” Hochul said Wednesday. Adding, “I get the job done because I don’t have time for distractions, particularly coming into this position.”