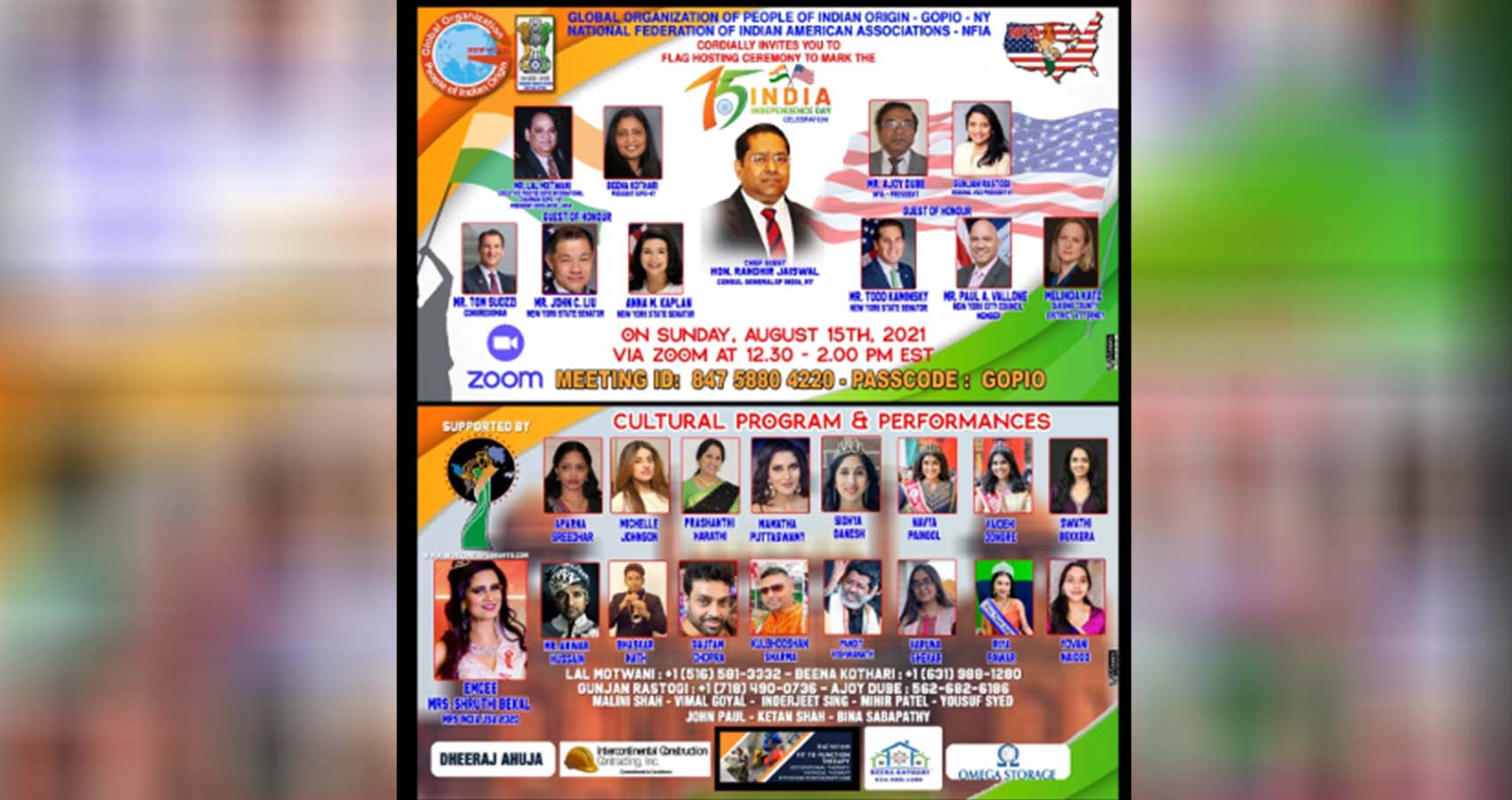 Living thousands of miles away, the Indian Diaspora are deeply connected with their Motherland India. This sense of belonging and affection for India was experienced and shared by  participants from around the world, representing almost all continents on Earth, as hundreds of Indian Diaspora members came together virtually to celebrate the 75th Independence Day celebrations, organized by the New York Chapter of Global Organization of People of Indian Origin (GOPIO) and National Federation of Indian Associations (NFIA) on Sunday, August 15th, 2021. 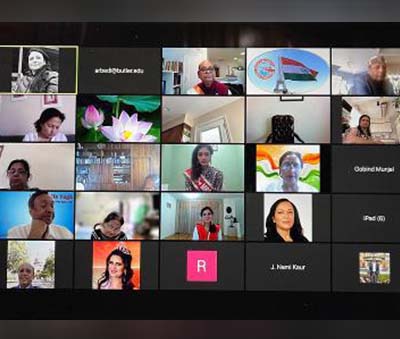 Organized by GOPIO New York, the oldest and the first Chapter of GOPIO Inetrnational, the colorful celebration of India’s Independence Day showcased the rich, colorful and the vibrant traditions of India, bringing them at the door steps of every household, as the audience from around the world were entertained with mesmerizing music, scintillating dance performances and inspiring speeches.

In his eloquent address to the Diaspora community, India’s Consul General in New York, Randhir Kumar Jaiswal greeted the participants, the Diaspora, and the friends and supporters of India from around the world as India turned 74 today. The veteran diplomat said, “Today is a very special day; even more special for all of us as India Turns 75 today.” Saluting Mahatma Gandhi, whose values of unity, diversity, non-violence and oneness India celebrates today, Ambassador Jaiswal reminded the audience of Prime Minister Narendra Modi’s address to the nation from the majestic Red Fort in New Delhi on the eve of India’s 75th Independence Day, said, “India is marking the occasion as “Azadi ka Amrit Mahotsav” under which a series of events have been organized across the United States.”

While wishing all a Happy Independence Day, the Consul emphasized the important role played by the Indian diaspora in strengthening India-US relations and helping in greater progress and prosperity of India and the United States. The Consul also thanked the diaspora for their whole hearted support in providing medical equipment to their motherland during the COVID crisis. 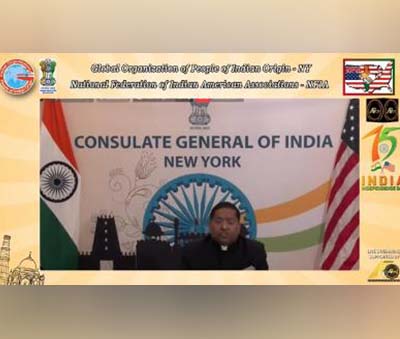 Echoing the sentiments expressed by Prime Minister Modi, Ambassador Jaiswal focused on India’s achievements and about the goal to make inclusive development, harnessing the betterment of the sea, clean environment and next generation Indians and Digital India and women empowerment. He urged the Indian American community to “join in the celebrations as a way to stay connected with India as you continue to celebrate India and India’s friendship with the United States.”

Earlier, Beena Kothari, GOPIO New York President while introducing Ambassador Jaiswal as a veteran diplomat, Ms. Kothari shared about with the audience his vast his experiences in foreign diplomacy around the world.

Gunjan Rastogi introduced Congressman Tom Suozzi, representing the 3rd Congressional district of New York. Calling him a “friend of India” she said, “He is our voice in Washington DC.” In a message, Rep. Suozzi described India as a true friend of the US and they both share a special relationship. Acknowledging that both the democratic countries are facing challenges in their quest to honor freedom and democratic values, he urged India “to end discrimination.” He said, “All human being are divine and are made equal.” He lauded “the Indian American community for their contributions to the growth of the nation. And we are grateful to you.” 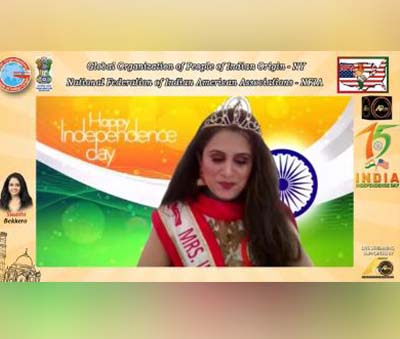 Lal Motwani, Founding President of GOPIO New York and Executive Trustee of GOPIO International, and the main organizer of the celebrations today, in his address, greeted Honorable India’s Consul General in New York, Randhir Kumar Jaiswal, other elected officials, including Rep.  Tom Suozzi, New York Senators John Liu, Anna Kaplan, and Todd Kaminsky, as well as New York City Council Member Paul Vallone and Queens County District Attorney  Melinda Katz, members and leaders of GOPIO from around the world who have joined us together to celebrate the 75th Anniversary of India’s Independence Day celebrations organized by one of the oldest and most active Chapter, the New York Chapter of GOPIO.

“Today, on August 15th, India enters its 75th year of independence. Seventy-five years is a long span in the life of an individual. But it’s not all that much in the life of a nation,” Mr. Motwani said. “The anniversary reminds us of the sacrifices of the freedom fighters who fought peacefully, valiantly and with courage, stood united as one nation, against the mighty British rule. The anniversary reminds us, especially the strong Indian Diaspora of our roots, our traditions, values, the richness and diverse Indian culture, as we celebrate the vibrancy, freedom, diversity, and democratic values.

“We come together today as people of all faiths, including Hindus, Muslims, Sikhs, Christians, Parsees, Buddhists, and Jains to celebrate our freedom, which represents the uniqueness of Indian culture as we, from all backgrounds stand united to join in and honor our Mother India,” he said.  He praised and lauded the achievements of India. “Today India is on the upswing. Its population is young and eager and there’s a heady feeling of success everywhere. We salute all who have made India proud. Hats off to those men and women who adorned India with Olympic medals this year in Tokyo.” Reminding participants of the opportunities and responsibilities that Indians have, Mr. Motwani said, “Freedom has brought opportunities to almost every class and group of Indians, and this has been the best thing there is. With freedom comes a sense of dignity, an awareness that we are masters of our destiny. We can choose our future. It’s our country.” 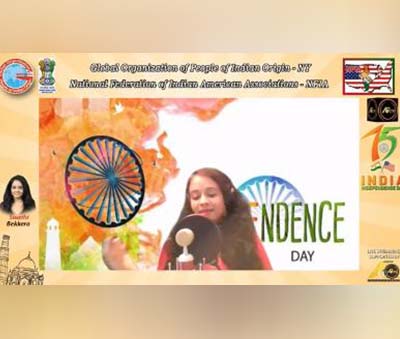 Emcee of the colorful cultural events, Shruti Bekali elegantly coordinated the celebration with participants from around the world. The national anthem of India was beautifully sung by Kulbhooshan Sharma, while Varuna Shekar led the audience to honor the US, our adopted country by singing the US national anthem. Varuna presented a live Bollywood dance.

Shree Bhaskar Nath, multi-talented artist and a disciple of Padma vibhushan, Sangeet Martand, the world-renowned vocalist pandit Jasraj presented a scintillating shehnai recital. Shehnai is also known as the Mangal vadya is  a very rare and unique air instrument which is played traditionally  on auspicious occasions, like in temples, at weddings ,when a child is born whenever happy occasion is to be observed. Bhaskar is a fifth generation shehanai wadak in his family of renowned shehnai vadaks.

Aparna Sreedhar from Paris presented a live rendition of melodious prayer song, invoking God’s blessings for everyone. Miss teen India Sidhya Ganesh 2020 from the state of Washington delighted the audience with a scintillating Bollywood dance.

Gautam Choubey from New Jersey at ABR Productions and Michelle Johnson mesmerized the audience with their melodious voice, singling some popular Bollywood patriotic songs. Swathy Vimal, the current Mrs India USA paid tributes to India through a Bollywood Medley, mesmerizing the audience with her beautiful voice singing some of the very popular numbers from the ever green Hindi movies.

Yovani Naidoo provided a beautiful rendition of a Telugu number. A live Bollywood medley by Anwar Hussain and friends from Jaipur, India representing a family of 12 generations serving the royals, was much appreciated and loved by all.

Bobby Kumar reminded the audience of Prime Minister Modi’s adderss, where he highlighted India’s achievements. In his address, Ajoy Dube said, “Proud to be part of the Indian Diaspora and joining you all celebrating India’s freedom and democracy.”

Sen. Todd Kaminsky and Sen. Kevin Thomas greeted India and Indian Americans.  In his message, Kevin Thomas, NY Senator said, “In addition to marking this important day in India’s history, Independence Day is an opportunity for the Indian-American diaspora to celebrate our vibrant culture, heritage, and aspirations. It is also an occasion to reflect on the vast and deep contributions that Indian immigrants and Indian Americans have made throughout American history.” New York State Senators John Liu, in his address, thanked the organizers for the invite. “Been to a few India celebrations today and I am looking forward to celebrating it in person next year.”

Sen. Anna Kaplan greeted India on this special occasion. “We are together. We can achieve everything working together. May we always build on our relationship.” New York City Council Member Paul Vallone lauded the organizers of GOPIO for putting together such a colorful event celebrating India’s Independence.  Queens County District Attorney Melinda Katz reminded the audience that “New York is proud to be the home of people from 109 nations. 50% of all those who live in Queens is born abroad and I am here to fight for everyone. Celebrating India gives us the opportunity to honor India and the Indian community in the state of New York.”