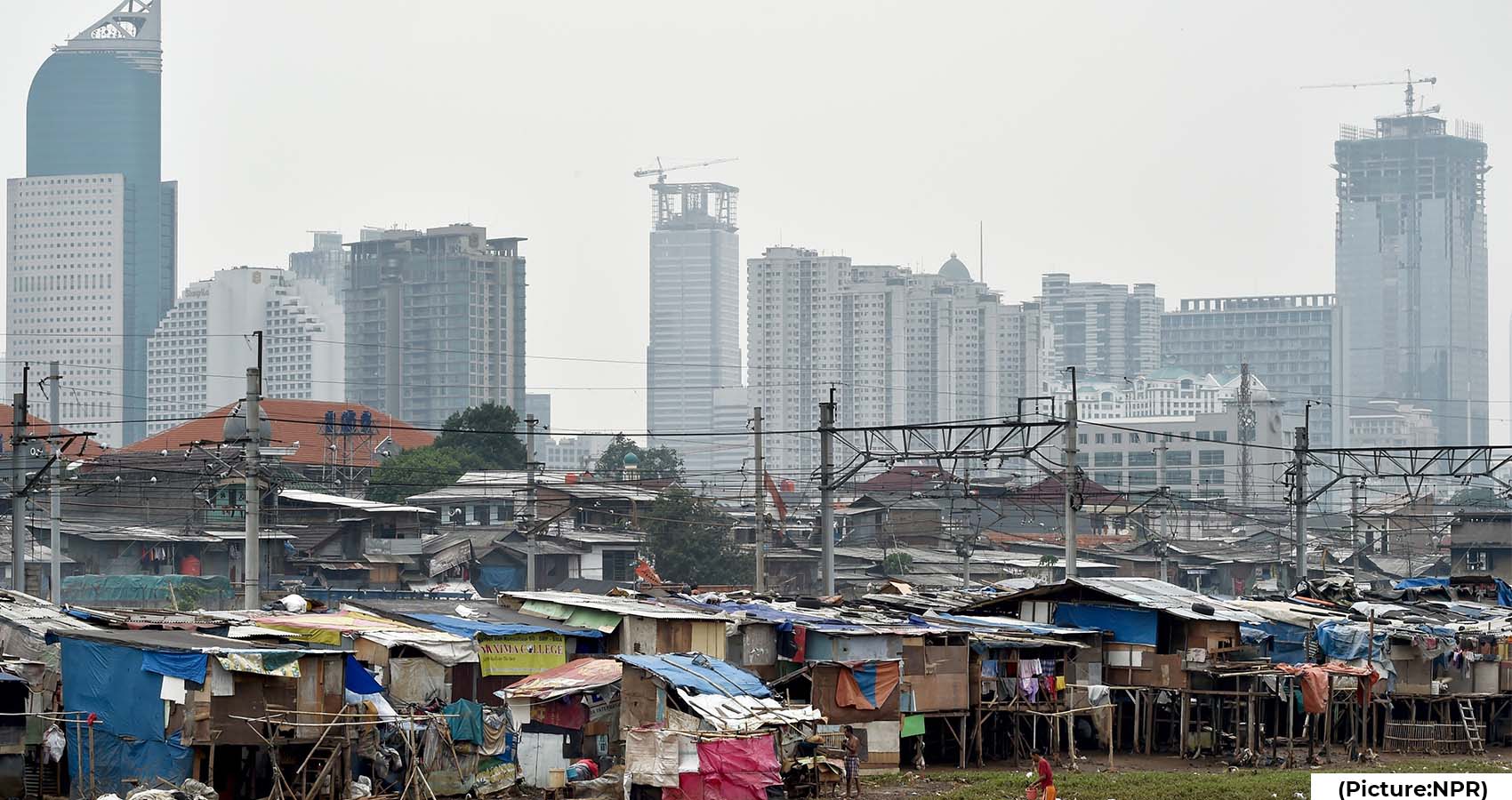 Michael Bloomberg, the three-term Mayor of New York city and a billionaire philanthropist, was once quoted as saying that by the time he dies, he would have given away all his wealth to charity – so that his cheque to the funeral undertaker will bounce for lack of funds in his bank account.

Sounds altruistic – even as the number of billionaires keep rising while the poorest of the world’s poor keep multiplying.

The latest brief by Oxfam International, titled “Profiting from Pain” and released May 23, shows that 573 people became new billionaires during the two-and-a half-year Covid 19 pandemic —while the world’s poverty stricken continued to increase.

“We expect this year that 263 million more people will crash into extreme poverty, at a rate of a million people every 33 hours,” Oxfam said.

Billionaires’ wealth has risen more in the first 24 months of COVID-19 than in 23 years combined. The total wealth of the world’s billionaires is now equivalent to 13.9 percent of global GDP. This is a three-fold increase (up from 4.4 percent) in 2000, according to the study.

Asked about the philanthropic gestures, Gabriela Bucher, Executive Director of Oxfam International, told IPS wealthy individuals who use their money to help others should be congratulated.

“But charitable giving is no substitute for wealthy people and companies paying their fair share of tax or ensuring their workers are paid a decent wage. And it does not justify them using their power and connections to lobby for unfair advantages over others,” she declared.

Oxfam’s new research also reveals that corporations in the energy, food and pharmaceutical sectors —where monopolies are especially common— are posting record-high profits, even as wages have barely budged and workers struggle with decades-high prices amid COVID-19. 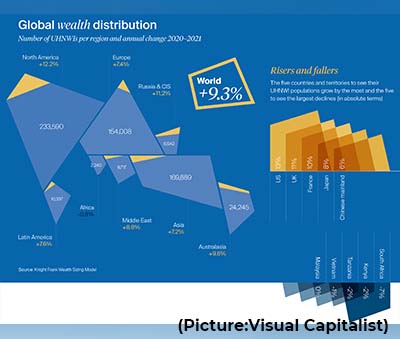 The fortunes of food and energy billionaires have risen by $453 billion in the last two years, equivalent to $1 billion every two days, says Oxfam.

Five of the largest energy companies (BP, Shell, Total Energies, Exxon and Chevron) are together making $2,600 profit every second, and there are now 62 new food billionaires.

Currently, the world’s total population is around 7.8 billion, and according to the UN, more than 736 million people live below the international poverty line.

A World Bank report last year said extreme poverty is set to rise, for the first time in more than two decades, and the impact of the spreading virus is expected to push up to 115 million more people into poverty, while the pandemic is compounding the forces of conflict and climate change, that has already been slowing poverty reduction.

By 2021, as many as 150 million more people could be living in extreme poverty.

Yasmeen Hassan, Global Executive Director at Equality Now, told IPS Oxfam’s report demonstrates systemic failings in the discriminatory nature of countries’ economies and underscores the urgent need for financial systems to be restructured so that they benefit the 99%, not the 1%.

“As with any crisis, Equality Now foresaw that gender would influence how individuals and communities experienced the pandemic, but even we were shocked at how exceptionally and intensely pre-existing inequalities and sex-based discrimination has been exacerbated”, she said.

While billionaires — the vast majority of whom are men — continue to amass vast sums of wealth, women around the world remain trapped in poverty. Wealthy elites are profiting off women’s labor, much of which is underappreciated, underpaid, and uncompensated, she pointed out.

“Economic hardship and inadequate policy responses to the pandemic have eroded many of the hard-won gains that have been achieved over recent years for women and girls. From increases in child marriage, sexual exploitation and human trafficking, to landlords demanding sex from female tenants who have lost their job, and domestic workers trapped inside with abusive employers, women and girls around the world have borne the brunt of the pandemic,” Hassan declared.

The Oxfam study has been released to coincide with the World Economic Forum’s (WEF) annual meeting—which includes the presence of the rich and the superrich—taking place in Davos-Klosters, Switzerland from 22-26 May. The meeting, whose theme is ‘Working Together, Restoring Trust’, will be the first global in-person leadership event since the outbreak of the COVID-19 pandemic in early 2020

“Billionaires are arriving in Davos to celebrate an incredible surge in their fortunes. The pandemic, and now the steep increases in food and energy prices have, simply put, been a bonanza for them. Meanwhile, decades of progress on extreme poverty are now in reverse and millions of people are facing impossible rises in the cost of simply staying alive,” said Oxfam’s Bucher.

She said billionaires’ fortunes have not increased because they are now smarter or working harder. But it is really the workers who are working harder, for less pay and in worse conditions.

The super-rich, she argued, have rigged the system with impunity for decades and they are now reaping the benefits. They have seized a shocking amount of the world’s wealth as a result of privatization and monopolies, gutting regulation and workers’ rights while stashing their cash in tax havens — all with the complicity of governments.”

“Meanwhile, millions of others are skipping meals, turning off the heating, falling behind on bills and wondering what they can possibly do next to survive. Across East Africa, one person is likely dying every minute from hunger. This grotesque inequality is breaking the bonds that hold us together as humanity. It is divisive, corrosive and dangerous. This is inequality that literally kills.”

Elaborating further, Hassan of Equality Now said women are more likely to be informally employed, low-wage earners, and this disadvantaged position has resulted in higher rates of women losing their jobs, particularly in sectors that were not prioritized in government relief packages.

“Women are also more likely to be primary caretaker and many have had to absorb increases in unpaid duties while schools and nurseries shut down. As a consequence, some women have been forced out of jobs as they found it impossible to juggle full-time work while also providing full-time childcare. This loss of income has been especially catastrophic for women in poverty and has made them more vulnerable to a range of human rights violations.”

She said world leaders must stop pursuing policy agendas that benefit the rich and hurt the poor.

“Instead, we urgently need a committed and coordinated response from governments and policymakers to reduce inequality and poverty, and address discrimination that is holding women and girls back while allowing the super-rich to get richer still,” she added.

Pharmaceutical corporations like Moderna and Pfizer are making $1,000 profit every second just from their monopoly control of the COVID-19 vaccine, despite its development having been supported by billions of dollars in public investments.

“They are charging governments up to 24 times more than the potential cost of generic production. 87 percent of people in low-income countries have still not been fully vaccinated.”

“The extremely rich and powerful are profiting from pain and suffering. This is unconscionable. Some have grown rich by denying billions of people access to vaccines, others by exploiting rising food and energy prices. They are paying out massive bonuses and dividends while paying as little tax as possible. This rising wealth and rising poverty are two sides of the same coin, proof that our economic system is functioning exactly how the rich and powerful designed it to do,” said Bucher.

–·Introduce one-off solidarity taxes on billionaires’ pandemic windfalls to fund support for people facing rising food and energy costs and a fair and sustainable recovery from COVID-19. Argentina adopted a one-off special levy dubbed the ‘millionaire’s tax’ and is now considering introducing a windfall tax on energy profits as well as a tax on undeclared assets held overseas to repay IMF debt. The super-rich have stashed nearly $8 trillion in tax havens.

— Introduce permanent wealth taxes to rein in extreme wealth and monopoly power, as well as the outsized carbon emissions of the super-rich. An annual wealth tax on millionaires starting at just 2 percent, and 5 percent on billionaires, could generate $2.52 trillion a year —enough to lift 2.3 billion people out of poverty, make enough vaccines for the world, and deliver universal healthcare and social protection for everyone living in low- and lower middle-income countries.