Devon Avenue in Chicago has long been a site for cultural exchange and South Asian diasporic community. Since those like Jagdish Khatwani opened the first South Asian business on Devon, India Sari Palace, in 1972, and the Patel Brothers opening their trademark grocery store in 1974, this region has become a home for the largest community of South Asian residents in Chicago, Illinois and the broader Midwest.

With the waves of the South Asian diaspora also came the businesses, cuisines, and arts of ancestral traditions. But, as many of us have learned, particularly with the trials of the pandemic, making space for tradition has become challenging. Mandala Arts has moved its headquarters where we believe South Asian arts are already deeply rooted; the arts need and deserve an advocate, supporter, and leader. With current and future artistic partnerships and collaborations, Mandala believes that Devon can grow and thrive. 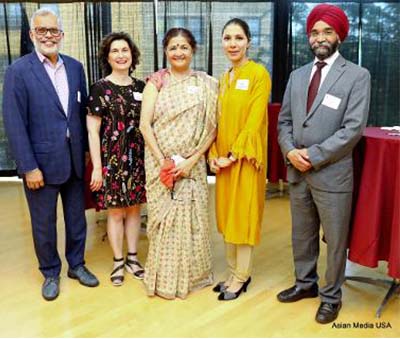 Mandala will use this space, beginning June 1, for community classes, open rehearsals, and special programs. Among the first activities will be the Mandala Makers Festival, which runs June 16–26 indoors and outdoors in the Devon Avenue community

Nayar says, “Since its inception in 2014, Mandala has successfully engaged Chicagoland audiences in the rich diversity of South Asian Performing arts traditions through professional performances, artistic education, and community engagement. Still, Mandala cherished its deep connection to the community of artists, students, and audiences of Devon, where Mandala has steadily increased programming over the last several years. Having established its place as a force in the Chicago arts scene, Mandala Arts is committed to supporting and empowering the South Asian diasporic community whose traditions, identities and practices that the organization represents. Finally, with the opening of this space, Mandala is able to call Devon home, both in our hearts and in our organizational roots.”

Prominent Physician and well known community leader Dr. Umang Patel, President of Mandala Arts  welcomed the guests and said I am delighted to be a part of the team in bringing the South Asian Cultural Hub on Devon Ave and added it will regenerate the  vibrancy of Indian culture through arts, dance and music while resurrecting the ideals of Gandhianism.

Alderwoman Debra Silverstein of the 50th ward in her address welcomed the establishment of India’s cultural center on Devon Ave and said she is honored to see the revitalization of not just the development of the ward, but revitalization of arts and culture of South Asian heritage. Alderwood Debra Silverstein said the 50th ward is home to a large population of South Asians and through the Mandala Arts center, we will be able to connect with each other in celebrating the colorful diverse cultures.

Alderman Andre Vasquez Jr of Chicago’s 40th ward in his address said that it warms his heart to see the showcasing of India’s rich cultural heritage on Devon Ave brought by Mandala Arts and added this cultural center transcends language, it transcends culture, and it allows us to tell the beautiful stories that depict the enduring culture of South Asia. . For more information about that event, visit makersfestival.mandalaarts.org.