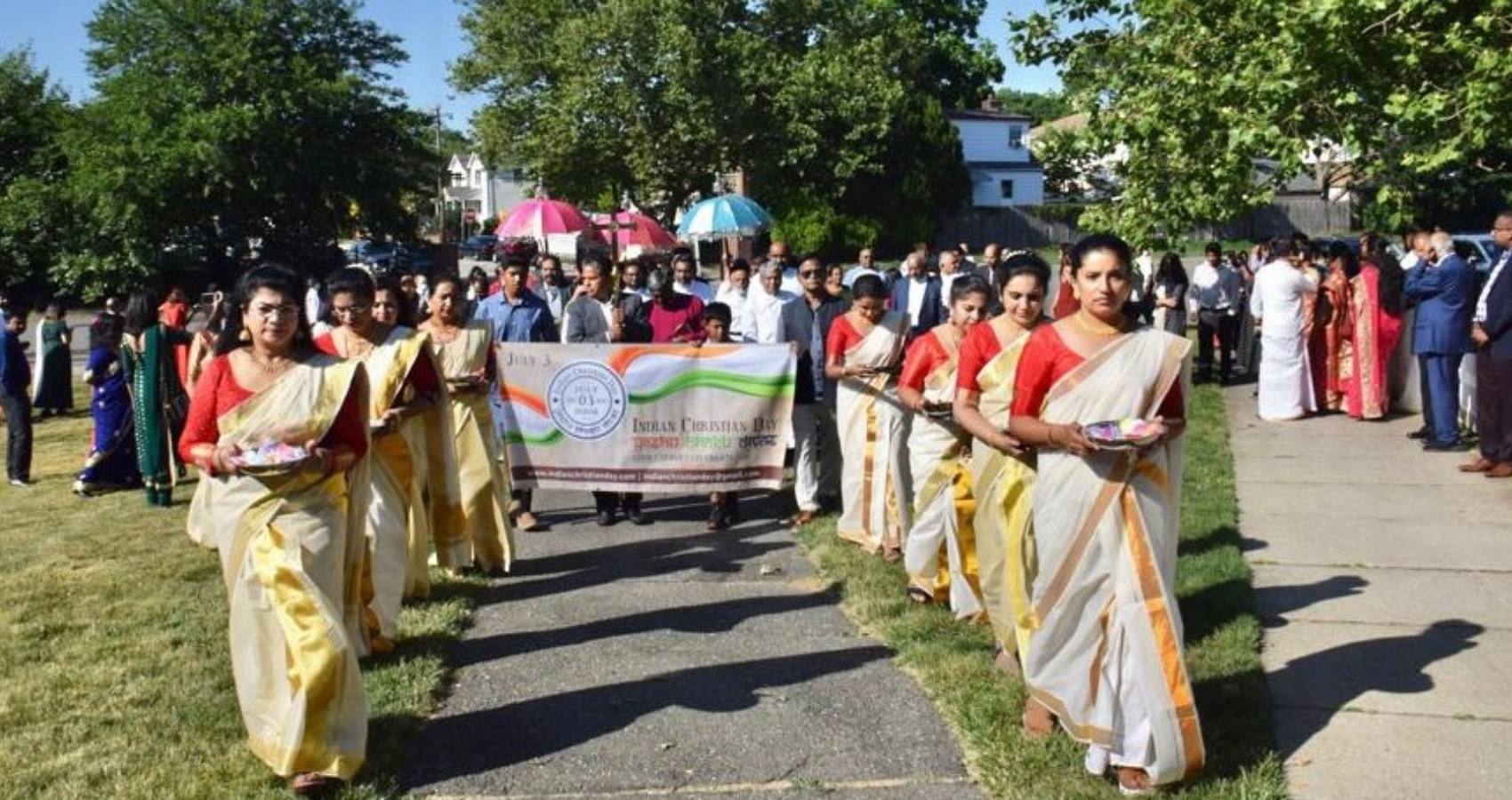 The Indian Christian Day (Jesus Bhakti Divas) organized to celebrate the Indian heritage and Christian spirit to show solidarity with persecuted Christians in India, made history as Christians of Indian origin  gathered, read the Bible in their own languages and sang prayer songs, showcasing “a bright union of fervent faith” as they came from the states of New York, New Jersey, Connecticut and Pennsylvania in Elmont, NY on Sunday, July 3rd, 2022.

The event was organized by the Federation of Indian American Christian Organizations of North America (FIACONA), a forum of Christian organizations in response to the insidious attempts to alienate and attach the Christians through the propaganda that the Christian faith was left behind by British colonialism in India, despite its two thousand years of tradition.

The event also coincided with the 1950th anniversary of the martyrdom of Saint Thomas.  Historically, July 3rd is celebrated as St. Thomas day by Christians across India. However, starting from 2021, the day is being celebrated as Indian Christian Day in India and among the global Diaspora of Christians. In the United States, it is estimated that Christians from India constitute about 20% of the Diaspora, which amounts to close to a million non-resident Indians and people of Indian origin.

The gathering, which was blessed with the presence of bishops and priests from various churches, began with a chendamela and a procession. St. Vincent de Paul Malankara Catholic Church in Elmont became a platform for Christian unity. The conference started with the bishops lighting the lamp as a symbol of Indian heritage and patriotism.

Fiacona President Koshy George pointed out  in his welcome speech that our established belief is that Saint Thomas has brought the gospel to India and was martyred in AD 72.  To mark its 1900 years, the government of India issued a postage stamp in 1972. So this year marks the 1950th anniversary of the martyrdom of Saint Thomas. Mr. Koshy also expressed his deep concern on the growing persecution of Christians in India as the fundamental religious freedom guaranteed under India’s constitution is no longer guaranteed under the BJP rule under the Indian Courts’ eyes.   Last year alone 761 cases of persecution have been identified which have been published in a book form by FIACONA.  He said that the purpose of the meeting is to express our pain against such atrocities.

Rt. Rev. Dr. Dharmaraj Rasalam, the Moderator of the Church of South India, spoke about how the arrival of St. Thomas not only impacted the lives of Christians and paid tribute to the sacrifices of the Christian community to the nation in uplifting the poor and oppressed. Rev. Dr. Ruben Mark, the Deputy moderator Bishop spoke about the love Indian Christians in the Diaspora have for India and encouraged them to continue with the unity they have exhibited at the gathering. He described how the arrival and activities of St. Thomas influenced India. The works of St. Thomas is crucial in the Christian faith. He also extolled the diaspora’s love for India.  He said that we are proud to be Indian Christians.  He said the willingness to sacrifice for the faith was part of the Christian faith.  Despite being a persecuted community, Christians are not united.  But today, all the sects of Christians are happy to attend this event. 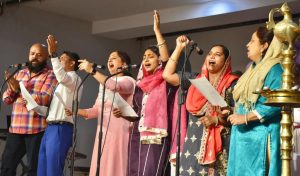 Bishop Johncy Itty, Bishop of the Episcopal Church in Long Island, New York, said that India, along with the rest of the world, is going through a serious crisis today.  However, our faith should sustain us in such a time as this.  He pointed out that India and the world are in various conflicts. There is no time in life without conflict. But now it is too much. But God leads us by the hand. We may not be able to change the times, but we can make changes.

Rev. Dr. Itty Abraham of the Indian Pentecostal Church, in his speech, encouraged Christians to be steadfast and said, “It is Christ that built the Church, and no forces would be able to undo it. The propaganda to paint Christianity in India as part of the colonial legacy is ill-conceived and will not gain footing.”

The persecution against Christians is increasing Rev. Dr. Itti Abraham pointed out. But it won’t break us. Christ builds the church. No evil shall prevail against it. Jesus himself said that there will be such persecutions. In such situations, we need to move forward with unity. He said that it is wrong to think that the Indian Christianity is a faith arisen from British colonialism.

CSI Church General Secretary Adv. Fernandez Rathinaraja pointed to Saint Thomas as a social reformer.  It was work against human sacrifice and caste system that led to his martyrdom.  Secularism is enshrined In the preamble of the Indian Constitution. There have been concerted efforts to undermine it. Religion should not be a part of political life. The state should be neutral in religious matters. Protests against these are taking place in the states of Tamil Nadu, Andhra and Kerala. He pointed out that the administration is able to suppress the voice of protest in other states.

Father John Thomas representing Orthodox Church, urged his fellow Christians to follow the path of St. Thomas in taking the message of Christ across the people.  Christ had many followers. But in the end only a few remained. Faithful men like St. Thomas did not hesitate to sacrifice themselves. The situation can be dire. But trust in God. Let the cross of Jesus guide us, he said.

Bishop Mar Joy Alappatt who has just been elevated to the head of Syro Malabar Eparchy of Saint Thomas the Apostle of Chicago expressed his thrill to participate in the program which he though he had participated in ecumenical functions in New York and Chicago, this was the first time he was participating in one of this kind.   “This gathering on St. Thomas Day is significant. We become Christian people through the mission work of Thomas. The contribution of Christians to the development of India is inestimable.   We are saddened that Christians are being persecuted not only in India but all over the world. Prayer is our weapon against it. Christian faith strengthens us for martyrdom. Jesus himself has said that there will be such persecutions. But He has also assured that He will always be with us. So don’t be afraid. We do not hesitate to suffer. But persecution caused by injustice is unacceptable. We must question it. Through his own life and death, Thomas has shown us the way.  So we must strengthen our faith,” he said.

Saint Thomas is one of the strongest characters in the Bible. Especially in the Gospel of John. St. Thomas is mentioned there three times. In Chapter 11, Thomas arrives to comfort Martha and Mary’s family.   They are mourning the death of their brother Lazarus. Thomas forces Jesus to visit Bethany. Thomas also witnessed a miracle when Jesus came.  We see the bravery of St. Thomas in the Bible. But today’s Christians have lost that courage. We dare not bear witness to Christ. Likewise, we must strive for our unity should be willing to testify to Christ with prayer – he said.

The General Secretary of Church South India, in Chennai, Adv. Fernandas Rathaniraja, in his speech, warned the audience about the concerted efforts vested interests are making to remove the word secularism from the constitution and transform India into a Hindu Rashtra and urged vigilance.

George Abraham, one of the leading organizers of the program began his vote of thanks by repeating from Bible “how good and pleasant it is when God’s people live together in the unity”.  He said that we have witnessed an extraordinary manifestation of unity, unit of Christians from india, across regions and languages despite the denominational differences.