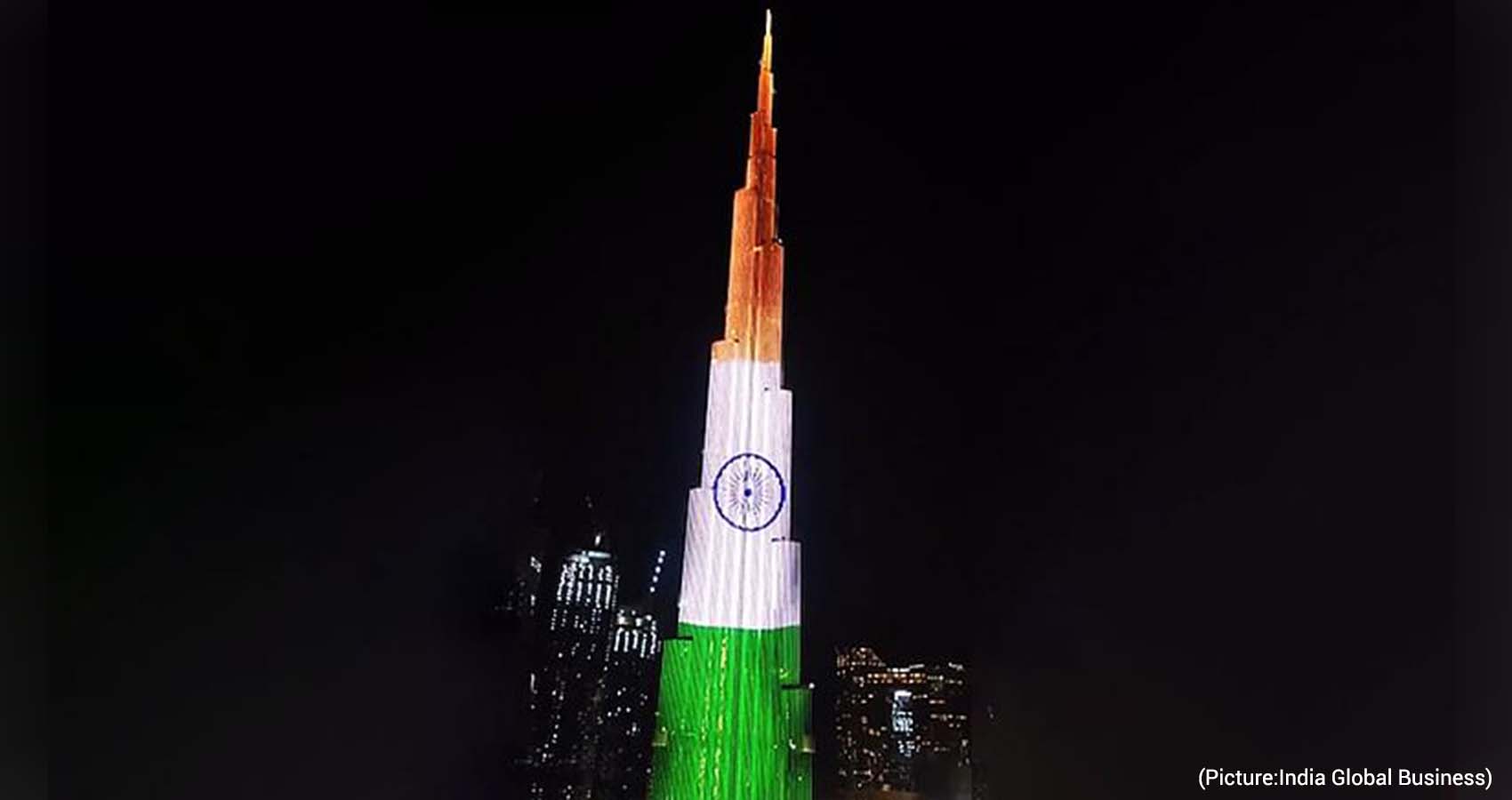 Close on heels after announcement of conclusion of interim trade deal between India and Australia by mid-March, the Comprehensive Economic Partnership Agreement (CEPA) with UAE will be a huge boost for Indian economy.  In a virtual summit meet commemorating 75 years of India’s independence and 50 years of UAE’s foundation, Indian Prime Minister Narendra Modi and Crown Prince Sheikh Mohammed bin Zayed Al Nahyan witnessed the signing of CEPA.

The FTA with UAE is New Delhi’s second major deal after the India-Mauritius Comprehensive Economic Cooperation and Partnership Agreement (CECPA) in February 2021.

Breaching the traditional timelines, expediting the talks, both countries finalised this early harvest deal in a record 88 days. Both the countries commenced the talks in September 2021. Three visits by the External Affairs Minister and a visit by Commerce Minister to UAE for negotiations laid the ground for CEPA. To increase the existing bilateral trade worth $60 billion to $100 billion merchandise trade, and services trade to $15 billion in five years, the CEPA envisioned to reduce tariffs initially of 80% goods and will extend to 98% of goods over time.

Besides enabling the two-way investment in trade and services, start-ups and fintechs, the FTA is expected to create 5 lakh jobs in gems, textiles, engineering, agriculture and auto sectors in India and 1 lakh jobs in UAE.

Introducing new structural changes and launching “Vocal for Local: Manufacture in India for the World”, a cumulative turn around in manufacturing sector Indian Government set the merchandise export target of $400 billion1 for the 2022. India is almost on reaching this milestone this year. Enthused by fledging manufacturing potential, India is aiming at $2 trillion exports by 2030- comprising of $1 trillion merchandise exports and $1 trillion service exports. The FTA with UAE will not only help in sustaining the growth but would facilitate access to attractive export markets for Indian goods.

In line with its ambitious targets, New Delhi has junked the strategy of signing trade agreements to join trade groups and shifted its focus on sealing bilateral FTAs with countries to facilitate market access and better integration of Indian markets to global supply chains. This FTA with UAE will eventually actuate India to conclude similar trade agreements with GCC countries (Saudi Arabia, Qatar, Kuwait, Oman and Bahrain), the UK, the EU, Australia, Israel and Canada on anvil.

Giving major push to its FTA strategy, the UAE is also planning to seal FTAs with eight countries including India, the UK, Indonesia, Turkey, South Korea, Ethiopia, Israel and Kenya this year. Needless to say, enhanced economic cooperation is bound to foster a robust and resilient relationship.

India and UAE established diplomatic ties in 1972. But Prime Minister Modi’s visit to the country in 2015, a first in 34 years, resurrected the ties hinged on the pillars of energy cooperation, remittances and employment destination. In line with UAE’s “Vision 2021” which sought to diversify its economy, India and UAE harnessed a vision to expand the cooperation to different sectors. Subsequently, countries unveiled UAE-India Infrastructure Investment Fund. UAE pledged $75 billion to support India’s plans for building next generation infrastructure over a period of time.

The bilateral trade which mainly comprised of oil valued at $180 million per annum in 1970s steadily grew to $59 billion. Currently UAE is the third largest trading and export destination of Indian goods after US and China. UAE is 9th biggest investor in India in terms of FDI.

Since 2015, state visits by Prime Minister Modi in 2018, 2019 and reciprocal visits by Crown Prince in 2016 and 2017 reinvigorated the ties. In 2017, on the eve of Crown Prince’s visit to India as guest of honour for Republic Day celebrations countries elevated the ties to Comprehensive Strategic Partnership. Signalling trust and deepening friendship, UAE armed forces joined the parade becoming the first Arab nation to participate in the Republic Day march and second foreign military contingent. The first being the French contingent.

Aside the synergistic economic cooperation, the significant hallmark of India-UAE relationship is developmental partnership in J&K. Riled by abrogation of article 370, Pakistan has attempted to garner the support of OIC countries against India. Unequivocally stating that it is an internal matter of India, UAE cold shouldered Pakistan.

In response to Pakistan’s nefarious agenda to destabilise J&K, India roped in the UAE as a developmental partner. In October 2021, India hosted a high-level delegation from Dubai for signing a MoU with J&K administration for real estate development, industrial parks, IT towers, logistics, medical colleges among others at Srinagar3. Giving a huge boost to trade, tourism and international connectivity, direct flight between Srinagar and Sharjah was flagged off.

As a follow up, commemorating J&K week at Indian pavilion of Dubai Expo 2020, Lieutenant Governor Manoj Sinha travelled to UAE to meet business leaders to attract investments for economic development. He finalised investment commitments from Emaar, DP World and the Lulu world towards building of Mall of Srinagar, establishment of multi-modal inland container terminal and cold storage facilities and setting up of network of hypermarkets for handicrafts, horticulture products, fresh produce from J&K respectively. Clearly this mutually beneficial development partnership besides bolstering ties is a message to the World that India is keen of putting J&K on a growth trajectory.

Energy partnership has been key pillar of Indo-UAE bilateral ties. Additionally, UAE is also India’s first international partner by way of investing crude in India’s Strategic Petroleum Reserves Program, has committed to collaborate with India towards an equitable transition to low-carbon future. With UAE selected to host COP28 in 2023, countries have agreed to work closely in context of COPs, International Renewable Energy Agency (IREA) and International Solar Alliance (ISA). With UAE joining the UNSC as non-permanent member for 2022-23, both countries resolved to “reinforce mutual support in multilateral areas to promote collaboration in economic and infrastructure spheres”4.

Modi condemned the recent attacks by the Houthi rebels against UAE. Reaffirming their joint commitment to fight terrorism and extremism, both the leaders emphasised the “importance of promoting the values of peace, moderation, coexistence and tolerance”. Thanks to UAE’s commitment towards moderation and tolerance, the West Asia fraught with turbulence and friction is witnessing a new churn. While Abraham Accords played a pivotal role in reshaping and integration of the region, the UAE’s role in bringing the countries has raised the hopes of new dawn of co-existence and peace.

India-UAE comprehensive strategic partnership and strong ties have paved way for a new multilateral touted as the “new Quad” comprising India, UAE, Israel and the US. Led by UAE, foreign Ministers of the countries held the first virtual summit in October to explore risk free economic opportunities in the post Abraham Accords era. As of now there is little to suggest that the new Quad envisages a strategic or security role. But India’s strong ties with UAE has helped it to overcome the traditional inhibitions to enter a regional cooperation arrangement in the West Asia.

UAE is home to 3.5 million Indian community with Indians being “largest minority ethnic group” making up for 38% of UAE residents. The intangible force of people to people connect and strong business to business relations have brought the countries much closer.

Indian diplomacy is certainly coming of the age by breaking the self-imposed barriers of staying away from West Asia. Maintaining strong friendly ties with rivals- Israel, Iran, Saudi Arabia, India is slowly expanding its reach in the Arab region.

Breaking new ground through FTA, both countries have signalled their intent to consolidate the partnership with new optimism. Together with close collaboration and sense of purpose, countries have set a stage to usher into a new era of prosperity contributing to global recovery and creating immense opportunities for both economies.

Through an unprecedented outreach, both the countries have transformed a transactional energy cooperation into a comprehensive strategic cooperation. Now UAE is a vital strategic partner of India for the regional cooperation in West Asia.