Notice: register_sidebar was called incorrectly. No id was set in the arguments array for the "Homepage Sidebar" sidebar. Defaulting to "sidebar-4". Manually set the id to "sidebar-4" to silence this notice and keep existing sidebar content. Please see Debugging in WordPress for more information. (This message was added in version 4.2.0.) in /home/universalmirror/public_html/theunn.com/wp-includes/functions.php on line 5311
 Dr. Suresh Reddy Assumes Charge As President of Indian American Medical Association, Illinois - Universal News
Skip to content 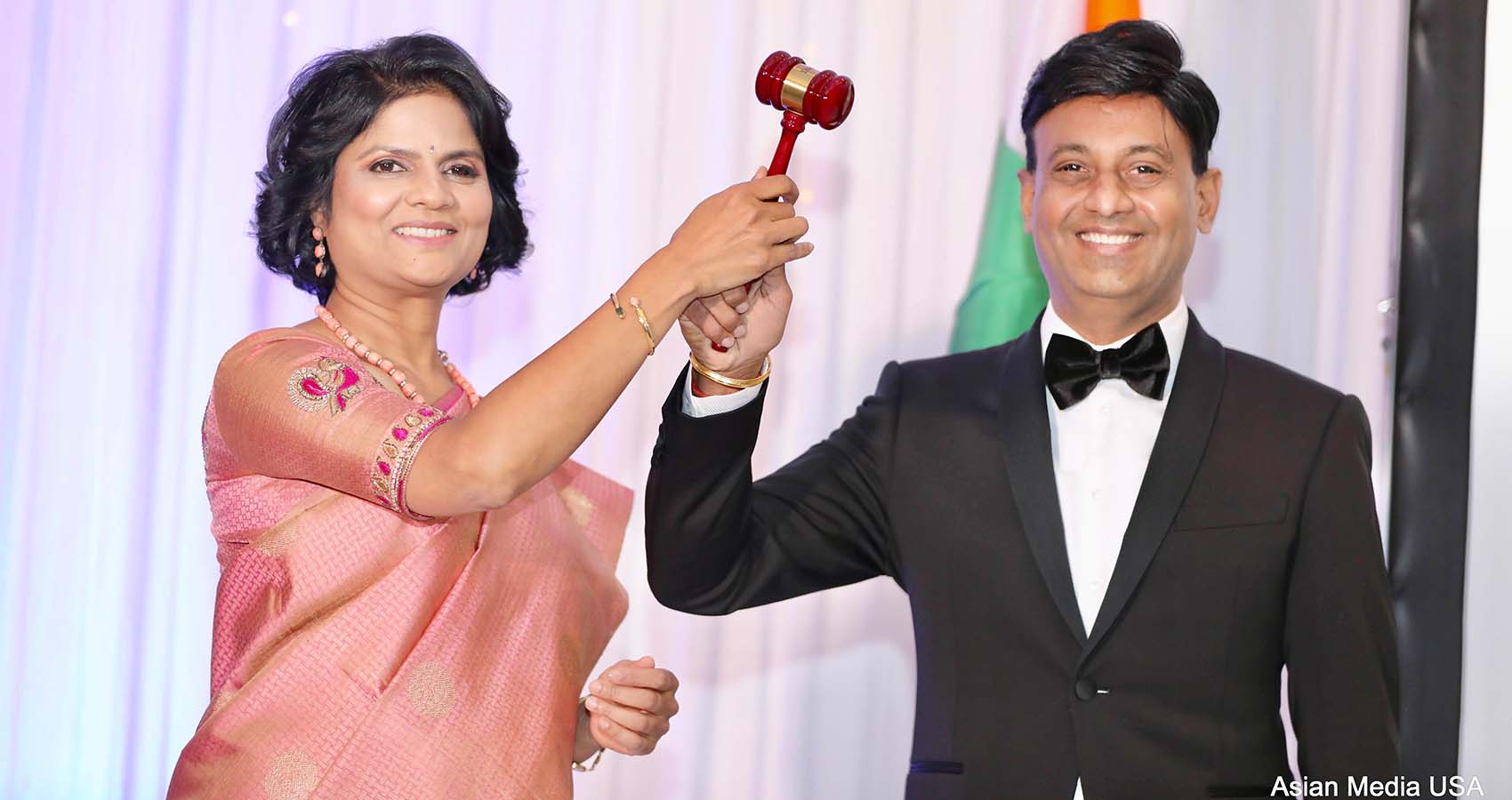 (Chicago, IL: November 15, 2022) “I would like to stand on the top of shoulders of 39 Past Presidents so I can see farther,” Dr. Suresh Reddy, a Neuro Interventional Radiologist practicing in the Chicago area and a past President of national AAPI, said immediately after assuming office as the President of Indian American Medical Association, Illinois during a colorful ceremony held in Oakbrook, IL on Saturday, November 13th. 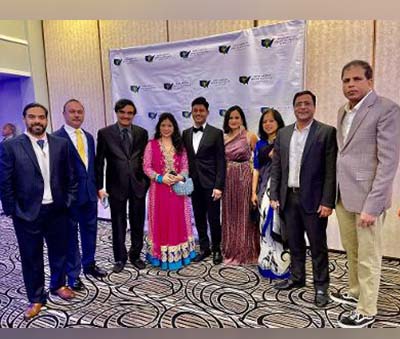 “As the President, one of my main goal is to revitalize local Chapters that are the backbone for the national organization; help make the local Chapters financially viable as funds have dwindled due to pharma support; and to bring in younger physicians into the fold,” the young and dynamic President told a select group of audience who had come to cheer him and the new executive committee.

The new Treasurer is Dr. Meher Medavaram and the Treasurer-Elect is Dr. Rajeev Kumar. The new chairs of the committee include Drs. Aparna Natarajan, Srilatha Gundala, Tapan Parikh, and Neetha Dhananjaya.

Dr. Reddy expressed his deep gratitude to the past presidents with whom he had worked: Drs. Samir Shah, Tapas Das Gupta, Sreenivas Reddy, Niranjana Shah, Geetha Wadhwani and Suneela Harsoor. 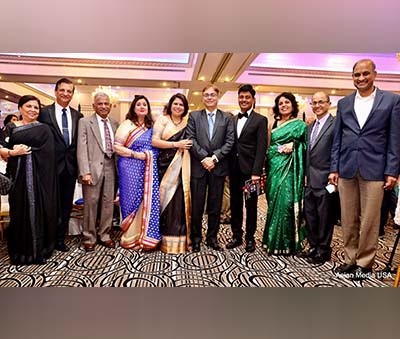 “I would also like to thank all the leaders of IAMA, especially Drs, Vemuri Murthy, Hanumadass, Rohit Vasa, Satya Ahuja, Shastri Swaminathan, Khandelwal, Arvind Goyal, Annita John, Utpal Parikh,  Sukanya Reddy and several others.” He had a special note for Dr. Lalmalani. “I would like to thank my spiritual guru and political mentor, our Mayor of Oak Brook Dr. Lalmalani.”

Educated, trained, and board certified in Neuro-Radiology, Interventional Radiology and Interventional Neuro-Radiology at Beth Israel Deaconess Medical Center and Harvard Medical School, Boston, MA, Dr. Reddy had served as the Chief of Interventional Neuroradiology at Beth Israel Deaconess Medical Center and on Faculty at Harvard Medical School for almost a decade. Dr. Reddy has been involved in the highly specialized techniques and art of treating aneurysms and strokes in the complex part of our body, the Brain. He is also extensively trained to perform complex procedures in the most inaccessible regions of the spine. 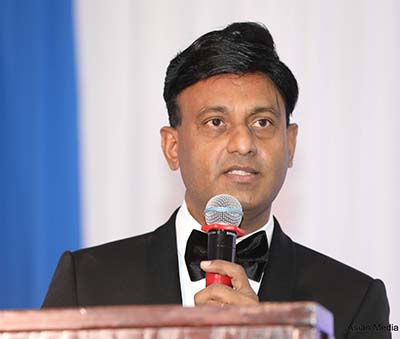 Author of many international medical journal articles, Dr. Reddy has traveled extensively, giving specialty lectures on the complex procedures that he does. Active in teaching and mentoring many medical students and residents, Dr. Reddy has received numerous teaching and mentoring awards. To his credit, he is a four-time recipient of “Faculty award for excellence in teaching” awarded by the Harvard Medical Students and Residents.

Dr. Suresh Reddy MD, MHM (Health Management and Policy), who completed his medical education in India at Kakatiya / Osmania Medical Colleges, before immigrating to the United States, currently serving as the Chief of Radiology at Hines Medical Center, Associate Professor of Radiology at Loyola Medical Center in Chicago, has had many years of service to the medical community and to the American Association of Physicians of Indian Origin and IAMA IL chapter. As an exceptional leader of AAPI, he has taken up several worthy causes, including clearing the “Green Card” backlog for Indian physicians in Rural America.

His strongest attribute is building bridges with the local chapters, which he claims to the backbone of the National organization.  To his credit, he added 8 new regional chapters to the national organization. In addition, Dr Reddy has worked closely with AAPI members over the years to successfully organize CME cruises to Alaska, Scandinavia, the Mediterranean, Hawaii, and Antarctica; along with CME trips to Israel and Jordan. Proceeds from all of these trips were donated back to AAPI. Dr Reddy firmly believes that such trips build a closer bond between AAPI members and their families. 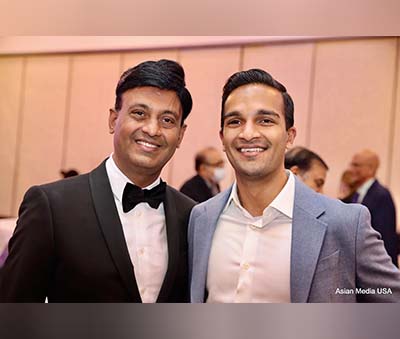 In the summer of 2019, Dr. Reddy organized The Global Health Summit in Hyderabad, an educational event with numerous workshops. Vice President of India, Sri Venkaiah Naidu, Union Minster of Health, Dr. Harshvardhan, both addressed the highly successful Global Health Summit. In October of 2019, he played a key role along with the Indian Resuscitation Council to train almost 500,000 lay people in Cardio-Pulmonary Resuscitation in India.

Assuming charge as the President of AAPI, nation’s largest physician organization, when the COVID Pandemic hit the world, impacting every aspect of life on a global level, he and his team faced a number of challenges in carrying out their plans during his term. Dr. Reddy and his team were right on task, and Dr Reddy devoted a significant part of the year to creating stability and leading AAPI to the next level. Never in the history of AAPI had so many educational programs been organized. Never had so many specialists shared knowledge so actively, with the participation of thousands of doctors from across the world.

It was the first time ever that a sitting Prime Minister of India addressed an AAPI event, when Shri Narendra Modi spoke at the Summer Summit organized by AAPI. Others who addressed the AAPI Summer Summit included Dr. Susan Bailey, Dr. Patricia Harris, US Surgeon General Dr. Jerome Adams, Congressman Raja Krishnamoorthi, and Soumya Swaminathan from the WHO. 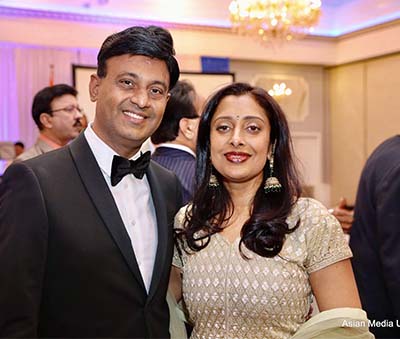 His leadership and foresight were deeply appreciated as AAPI became the first major organization to call for universal masking. In this regard, AAPI provided free masks to thousands of health care workers. AAPI members have honored more than 10,000 nurses in over 100 hospitals across more than 40 states by sponsoring lunches for them during the Nurses Week. He was instrumental in organizing the Obesity prevention programs in all continenets, sharing medical knowledge globally, team-building activities such as the Share-A-Blanket program, medical education programs such as CPR training, morale building programs like mentoring a future medical students, and India heritage programs like Independence Day celebrations.

Collaborating with the Indian Embassy in DC, under his leadership, more than 1000 prescriptions were written for Indian visitors who were stranded in the USA due to COVID Pandemic. He, along with his team created the “AAPI Endowment Fund,” raising and donating $300,000 with a goal of enabling his successors to be less burdened with fundraising and more focused on AAPI’s mission of Education, Mentoring, Research, Charity, and Service.

Dr. Reddy currently resides in the Chicago area with his wife Leela and son Rohun. He is currently a Trustee of the Village of Oak Brook, Lead of Chiefs of Radiology for the states of Illinois and Wisconsin Veterans Administration, and has participated in innumerable community events.  He has organized Independence Day celebrations and has worked with the IAMA team over the years to support numerous activities. He also organized numerous walkathons to honor our Veterans. 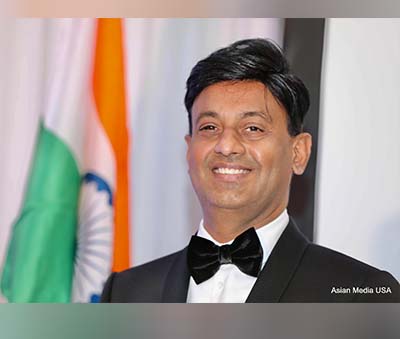 IAMA-IL is a non-profit organization comprised of Illinois physicians, fellows, residents, and medical students of Indian origin who are committed to professional excellence and quality patient care. IAMA-IL offers many opportunities for your organization to begin and grow a connection with our members and the communities we serve. We like to partner with organizations and people that strive for similar goals including a commitment to excellence, education, research and serving the community.

Dr. Suresh Reddy has made the Indian community proud with his innumerable contributions and he is ready to serve IAMA as its 40th President. He credits his track record of almost 6 years as a foot soldier in IAMA, as it has laid the foundation for this upcoming year. Dr. Suresh Reddy’s theme for IAMA under his leadership is, “Ask what you can do for IAMA, and not IAMA can do for you.”