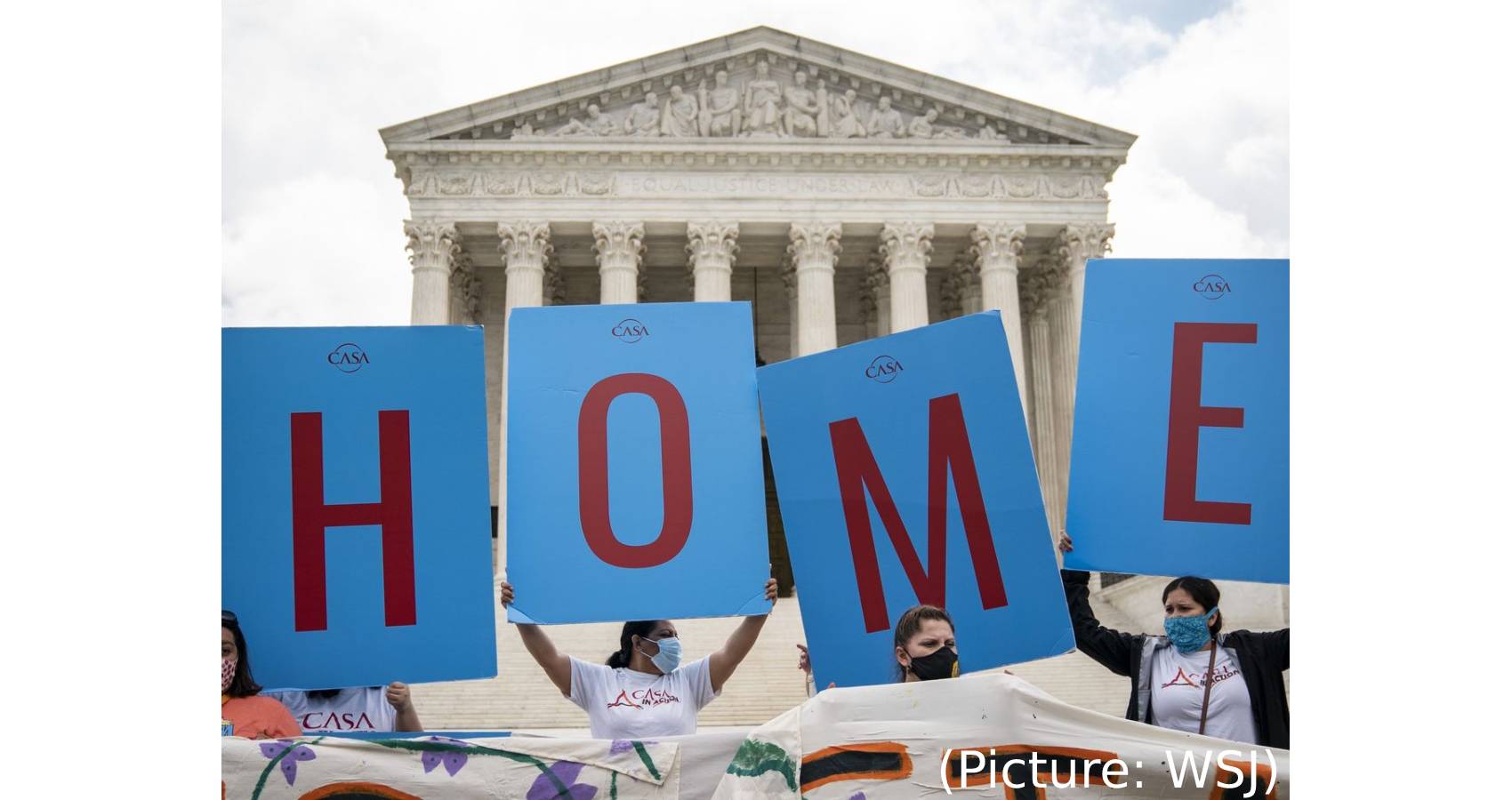 A federal judge in Texas has largely halted an Obama administration initiative that grants work permits and reprieves from deportation to undocumented immigrants brought to the United States as children – calling the program “unlawful” even as he allowed the more than 600,000 young people already in it to keep their protected status. U.S. District Judge Andrew Hanen sided with Texas and other states in his ruling that President Barack Obama, a Democrat, overstepped his executive authority when he created the program.

Hanen’s ruling called Deferred Action for Childhood Arrivals, or DACA, an “illegally implemented program” and said “the public interest of the nation is always served by the cessation of a program that was created in violation of law.” He prohibited the Department of Homeland Security from approving new applications, issued a permanent injunction vacating the memo that created DACA in 2012 – when President Joe Biden was vice president – and remanded the issue to the U.S. Department of Homeland Security for reconsideration. 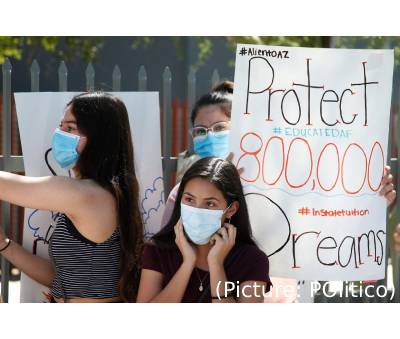 The Biden administration had no immediate response to Friday’s ruling. But the long-awaited knockdown spurred a political outcry and intensified pressure on the White House and Congress to pass an immigration measure this year. Immigrants brought to this country as children, known as “dreamers,” are among the most sympathetic of the 11 million immigrants in the United States illegally. Still, Republican and Democratic lawmakers have been unable to agree on whether to grant them legal status despite months of negotiations.Democrats are considering whether to use a budget reconciliation measure to take that action, a move that would require only a simple majority vote in the evenly divided Senate.

In statements Friday, July 16, 2021, both Senate Majority Leader Charles Schumer, D-N.Y., and House Speaker Nancy Pelosi, D-Calif., vowed to press forward on legislation that would ensure dreamers have a pathway to citizenship. Senate Judiciary Committee Chairman Richard Durbin, D-Ill., who has sponsored legislation for the past 20 years to grant dreamers citizenship – without success – said Congress had “found excuses to put off this decision” for too many years.”Congress will now act quickly – with or without the party of Donald Trump – to allow these Americans to finally become citizens,” Durbin said Friday.

Congressional Democrats and advocates for immigrants called Friday for the government to appeal Hanen’s ruling, which Rep. Katherine Clark, D-Mass., described as “cruel.” “To current #DACA recipients, you are safe here,” she said on Twitter. “To our young immigrants, we will not stop our work until every Dreamer is treated as they are: American.” But Sen. John Cornyn, R-Texas, called on Democrats to vote on a proposal he and Sen. Thom Tillis, R-N.C., floated earlier this month to Durbin, who has sponsored legislation for the past 20 years to grant dreamers citizenship – without success.

Cornyn and Tillis said they propose “targeted legislation” that would offer permanent legal status to “active participants” in DACA, and opined that anything broader is not “politically viable.” “Now will Senator Durbin schedule debate and vote on a bill that will provide DACA recipients some certainty?” Cornyn said in a tweet after the ruling. Google, which employs DACA recipients and is one of many companies that have defended their right to stay in the United States, condemned the ruling, saying “we are very disappointed by today’s decision.” To qualify for DACA, immigrants must have been under age 31 as of June 15, 2012, when the program was created, arrived in this country before turning 16, and resided in the United States since mid-2007. They also must have pursued studies or enlisted in the military, and passed a criminal-background check.

Those criteria left out thousands of immigrants whom the White House has said it hoped to legalize this year. Most DACA recipients are from Mexico, but they hail from all over the world, including South Korea, the Philippines, Uganda and New Zealand. They include software engineers, teachers, and doctors and nurses working the front lines of the coronavirus pandemic. Republican officials from Texas and several other states had called for an “orderly wind down” of the program in their lawsuit, arguing that it was unlawful and burdened states with costs for health care, education and law enforcement. But Hanen said he recognized that legions of young immigrants and their communities need the program, and would not wrest it from them as the Biden administration attempts to correct its deficiencies.

“Hundreds of thousands of individual DACA recipients, along with their employers, states, and loved ones, have come to rely on the DACA program,” Hanen, an appointee of President George W. Bush, a Republican, wrote in the ruling. “Given those interests, it is not equitable for a government program that has engendered such a significant reliance to terminate suddenly. This consideration, along with the government’s assertion that it is ready and willing to try to remedy the legal defects of the DACA program indicates that equity will not be served by a complete and immediate cessation of DACA.”

Hanen directed the Department of Homeland Security to post a notice within three calendar days saying that “a United States District Court has found the DACA program to be illegal and that, though applicants may continue to submit applications, the Government is prohibited from granting such applications.” He said his order was a “reasonable” decision that took into consideration the competing interests of dreamers and states such as Texas that had argued that the program granted people work permits who could then get driver’s licenses and compete with Americans for jobs.

“Not a surprise, just a painful reminder that we need to stop relying on temporary immigration fixes,” said Sen. Robert Menendez, D-N.J., who is the lead Senate sponsor of the U.S. Citizenship Act of 2021, Biden’s blueprint to create a path to citizenship for many undocumented immigrants. “Congress must seize the moment.” Advocates for immigrants said the ruling would once again upend the lives of people who have lived in the United States for much or most of their lives and consider it their home.

“If you can renew, you still have the lingering question of: Until when?” said José Muñoz, spokesman for United We Dream, the nation’s largest immigrant youth-led organization, and himself a DACA recipient. He estimated that tens of thousands of first-time applicants will be shut out of the program, endangering their plans to attend school or apply for driver’s licenses so they can legally drive. “It’s beyond time for Congress to act,” Muñoz said. “We need a path to citizenship.” The Trump administration attempted to terminate DACA starting in 2017, with a wind-down plan that would have ended the program by 2020. Federal courts blocked the effort. In June 2020, the U.S. Supreme Court ruled that the Trump administration had not properly considered the impact of rescinding DACA in 2017, and ordered the administration to start again – without weighing in on the legality of the DACA program.

Thomas Saenz, president and general counsel of the Mexican American Legal Defense and Educational Fund, a Los Angeles-based nonprofit that is defending DACA in the Texas lawsuit, expressed hope for the program on Friday since the Supreme Court has never declared the program unlawful.But he said the immigrants deserve permanent residency and not the “ongoing cruel roller coaster that our nation has placed DACA recipients on.” Saenz said his organization will decide in the next few days whether to appeal.