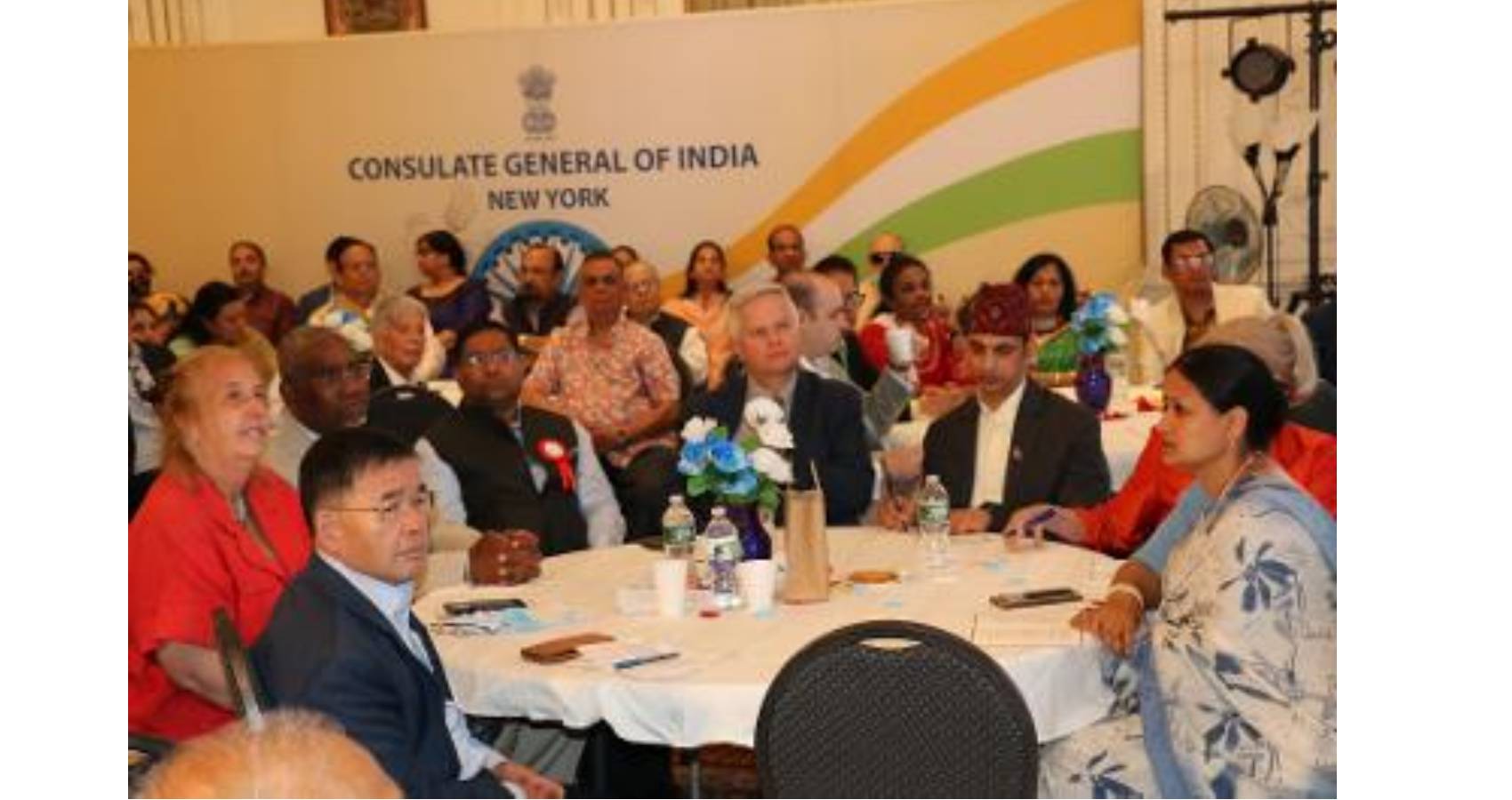 Mahavir Jayanti is one of the most auspicious and revered days observed by Jains, Hindus, and others around the world to commemorate the birth anniversary of the great soul who spread the message of peace and non-violence to mankind. Born in 599 BC, Lord Mahavir established the core principles of Jainism. Ahimsa (Non-Violence) was the most supreme principle of his teachings. The message of Lord Mahavir was adopted and practiced for the first time by Mahatma Gandhi in his social and political movements. Through this event, we aimed to commemorate and promote the important messages of non-violence and peace by celebrating two of Earth’s great souls. 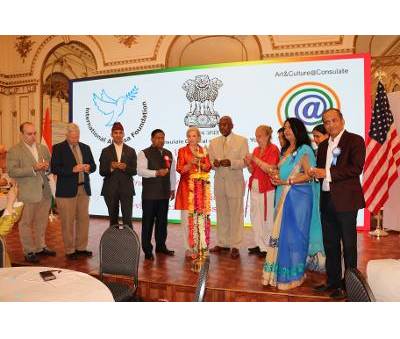 The event was organized by the founder and President of the International Ahimsa Foundation Dr. Neeta Jain. Due to her persistent hard work and networking, Dr. Jain has been elected as an Indian American female Democratic District Leader in New York, at present representingAssembly District 25 Part B in Queens. She is an accomplished educator and civic &amp; community leader. Being a Jain, she is a passionate advocate for non-violence and peace. To promote  these values, she founded and presides over the International Ahimsa Foundation, a domestic non-profit organization founded in 2012 to promote the study and practice of non-violence and peace in educational institutes.

In her speech at the Indian Consulate, Dr. Jain spoke about the impacts of Lord Mahavir and Mahatma Gandhi. She mentioned how Mahatma Gandhi used Jain principles of non-violence in his social and political movements. She described the importanceof non-violence, peace, and compassion towards all. She spoke about her goal of includingteachings about Ahimsa and Lord Mahavir in the educational curriculum, so that children everywhere can learn the value of non-violence. The Honorable Randhir Jaiswal, Consul General of India, NY, spoke about the relationship between the International Ahimsa Foundation and the Consulate General of India and the importance of cultural celebration and unity for the progress of society.

The event was graced with the presence of many elected officials from both the Federal and City levels, as well as many scholars. Some special guests and speakers included: Honorable Congresswoman Carolyn B. Maloney, who spoke about the importance of non-violence and peace and her goal to work with the International Ahimsa Foundation to have the United States Government award Mahatma Gandhi with the Congressional Gold Medal. Honorable Congressman Gregory Meeks, who spoke about the importance of cultural unity and the impact of Mahatma Gandhi on leaders like Nelson Mandela and Dr. Martin Luther King Jr. and the impact they had on his life and society as a whole. He also applauded Dr. Neeta Jain’s efforts to forward non-violence and praised her resilience. Both of them spoke about their goal to support vaccination in India.

Honorable Councilman Peter Koo, who spoke about the importance of diversity, acceptance, non-violence, and cultural unity between the Asian diasporas and how they are crucial to the success of society.  Honorable Manhattan Borough President Gale Brewer, who spoke succinctly about the importance of implementing the values of Lord Mahavir and Mahatma Gandhi into our world and the positive impact of the International Ahimsa Foundation.

Dr. JaykumarUpadhye, who spoke about the historical life, legacy, and impact of Lord Mahavir and how he influenced society and Mahatma Gandhi. Professor Kenneth R. Pugh, PhD, from Yale University, spoke about the relationships between mindfulness, meditation, and Jainism and how they scientifically improve brain activities, among other topics that shed light on easing negativity and anxiety by having a peaceful mindset. 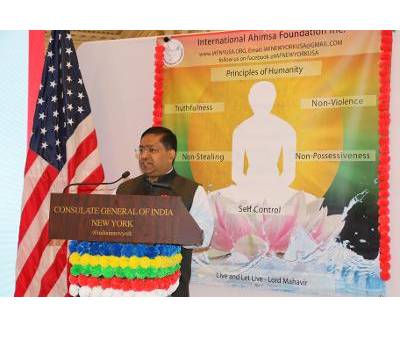 The Honorable Bishnu Prasad Gautam, Consul General of Nepal, NY, who spoke from the heart about the positive relationship and similar values between the Nepali and Indian diasporas and the importance of non-violence, peace, and unity. Sister Sabitha Geer, representative of the Brahma Kumaris to the United Nations, who spoke about the connection between awareness, attitude, vision, action, and the world, and guided the audience through some mindful meditation. Community leader Ashok Sancheti, who emphasized the importance of sharing and spreading happiness for prosperity and community success.  NYC Mayor Bill de Blasio ofFice was represented by Mr. Rohan Narain, who read his letter to the audience and Queens borough President Donavon Richards office was represented by Mr. Brent Weitzberg.

The event also featured many young members of our community. The event was MC’ed by Anika Jain, a high schooler with a passion for public speaking and pursuing the message of non-violence. A skit was performed by children from the community – Deshna Jain, Aanya Jain, and Ayush Jain – and the event concluded with a finale dance performance with young dancersfrom the Rhythm Dance Academy: Angel Shah and Anika Bhatia. The event was closed by Dr.Raj Bhayani, Vice President of the International Ahimsa Foundation, with a vote of thanks!

The International Ahimsa Foundation and the Consulate General of India were honored and overjoyed to celebrate such a momentous occasion with such honorable and impactful guests and speakers. The values and teachings of Lord Mahavir and Mahatma Gandhi are ones that should be honored and celebrated for years to come!