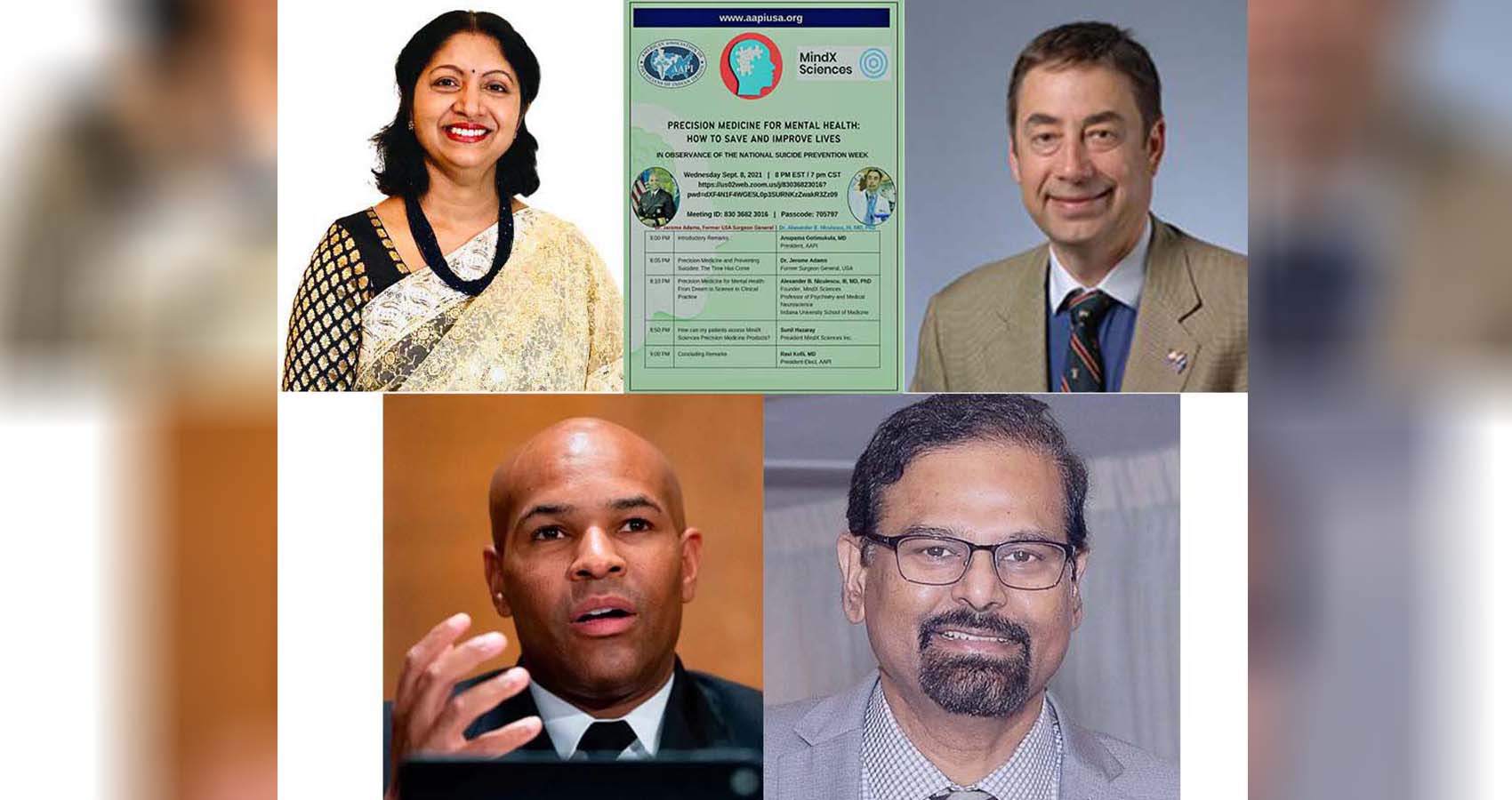 “National Suicide Prevention Week, which begins on September 5 and ends on September 11 this year, is an annual campaign observed in the United States to educate and inform the general public about suicide prevention and the warning signs of suicide,” said Dr. Anupama Gotimukula, President of American Association of Physicians of Indian Origin (AAPI) during a webinar on “Precision Medicine for Mental Health: How to Save and Improve Lives” organized by AAPI in collaboration with MindX Sciences Inc., on Wednesday Sept. 8, 2021.

The educational webinar attended by dozens of AAPI members from around the nation was organized in observance of the National Suicide Prevention Week, “which aims to reduce the stigma surrounding suicide and encourage the pursuit of mental health assistance because going to therapy should be as normalized as going to the gym.” Dr. Ravi Kolli, President-Elect of AAPI moderated the session, which had eminent speakers, including Dr. Jerome Adams, former United States Surgeon General and Dr. Alexander Niculescu, co-founder of Mindx Sciences and Professor of Psychiatry and Medical Neuroscience at Indiana University School of Medicine; and Sunil Hazaray, CEO of MindX Sciences.     In his introductory remarks, Dr. Koli drew the attention of the audience to the fact that “Almost 800,000 people die every year due to suicide, which means one death every 40 seconds, according to the WHO.” He said, “Mental health issues like depression are known to be the leading cause for attempting suicide. Suicide often occurs in a moment of unbearable pain or deep despair. Millions of Americans consider suicide, make a suicide plan, or attempt suicide every year — especially young Americans for whom suicide is the second leading cause of death.” By drawing attention to the problem of suicide in the United States, the campaign also strives to reduce the stigma surrounding the topic, as well as encourage the pursuit of mental health assistance and support people who have attempted suicide,” Dr. Kolli, a certified psychiatrist told the AAPI members.

Dr. Jerome Adams, the United States Surgeon General under President Trump, while addressing the audience on “Precision Medicine for Mental Health: The Time Has Come” drew attention of the participants to the reality that how mental health and social disparity are leading healthcare needs around the nation. “In 2019, suicide was the 10th leading cause of death in the United States, and the second leading cause of death for young people between the ages of 10 and 34,” Dr. Adams pointed out. While commemorating World Suicide Prevention Week, “We remember the many lives that are lost and those who survived suicide attempt and we strive to create hope through action,” said Dr. Adams.

Dr. Adams referred to the National Action Alliance for Suicide Prevention (Action Alliance), and his call as the Surgeon General of the United State to Implement the National Strategy for Suicide Prevention. “More than 20 years ago, Surgeon General David Satcher issued the landmark report The Surgeon General’s Call to Action to Prevent Suicide, recognizing suicide as a major public health issue and calling for a national response. The National Strategy for Suicide Prevention (National Strategy), first released in 2001 and updated in collaboration with the Action Alliance in 2012, identifies 13 goals and 60 objectives that address every aspect of suicide prevention—from fostering healthy and empowered individuals, families, and communities to providing effective prevention programs and clinical care,” Dr. Adams said.

Dr. Adams pointed out that “we know more about suicide and how it can be prevented today than we did in 1999. We understand that like other public health problems, such as obesity and cancer, suicide is influenced by many factors. As a result, suicide prevention efforts must engage all sectors, including public health, mental health, health care, social services, our military and Veterans, business, entertainment, media, faith communities, and education. These efforts must be informed by data, guided by the needs of the groups affected, and shaped by the voices of people who have experienced suicidal thoughts, plans, attempts, and losses.”

“Suicide is preventable and it continues to remain a growing public health issue,” he said. As many as 43,000 died of suicide in 2019 in the United States. While the suicide rate decreased in 2020, overdose attempt increased by 30%. Suicide is a burden on the nation, costing $93 billion annually. Early detection is cheap. They are preventable. Precision medicine needs to be embraced by assessing the symptoms which will help in decreasing uncertainty, he said. “Never has the need been a greater need and more tools available today than ever,” Dr. Admas said.

Dr. Adams referred to the vast and highly effective research and ongoing programs led by MindX Sciences, which has established a Mental Health Transformation Advisory Board, being co-led by Dr. Jerome Adams, who provides strategic advice on maximizing societal impact, addressing health disparities, and helping improve military mental health. In his address, Dr. Alexander B Niculescu III, focused on “Precision Medicine for Mental Health: From Dream to Science to Clinical Practice,” the tools available today, how we can access them and save lives. MindX Scinces offers “a complete set of tools to assess, diagnose, prevent suicide and treat mental health issues that lead to suicide,” he said.

Over 10 million people in US have suicidal thoughts, he said. How do you know among these 10 million, who will attempt and how many will die of suicide? “We need better tools to identify risk factors and how to decrease the risks and effectively intervene and of the ways to prevent suicide.” In this context, MindX’s research in identifying the tools and resources that will address the needs and help clients in real world will be enormously effective, he said. Dr. Alexander referred to a new study from the Indiana University School of Medicine that has found a way to test someone’s blood to gauge a patient’s depression, the risk of them developing severe depression in the future and the risk of future bipolar disorder, and thus opening the door for changes in diagnosing and treating mental illness.

“Blood biomarkers are emerging as important tools in disorders where subjective self-report by an individual, or a clinical impression of a health care professional, are not always reliable. These blood tests can open the door to precise, personalized matching with medications, and objective monitoring of response to treatment,” said Dr. Niculescu, who led the study and is a professor of psychiatry at the school.  “Through this work, we wanted to develop blood tests for depression and for bipolar disorder, to distinguish between the two, and to match people to the right treatments,” he told the audience. “This is part of our effort to bring psychiatry from the 19th century into the 21st century. To help it become like other contemporary fields such as oncology. Ultimately, the mission is to save and improve lives,” Dr. Niculescu added.

The Life x Mind App by MindX Sciences is meant to be a dashboard for your Life and Mind, a way to track how you feel and what you do, and see how they impact each other, he said. This will help you Know Thyself, Improve Thyself, as the ancient philosophers dreamed of, and live a happier, more hopeful, and more meaningful life. This app can also be used by doctors, psychologists, and coaches with their clients. Ten percent of the proceeds from each app will be donated to mental health support organizations. The SX Prevent Digital Test by MindX Sciences helps doctors and health organizations to identify and reduce suicide risk. It is based on solid research. Studies describing its components have been published in peer reviewed scientific and medical journals, Dr. Niculescu added.

Sunil Hazaray, CEO of MindX Sciences spoke on “how can my patients access Midx Precision Medicine for Mental Health products.” He provided practical logistics of finding and accessing the services by Minx and the cost as well as ways to access their services. “The MindX Dashboard by MindX Sciences is an optional product that helps doctors and health organizations track and integrate de-identified test information from other MindX products,” he said. MindX Blood Tests by MindX Sciences are being performed in a CLIA setting to track and identify suicidality risk, pain, PTSD, mood (depression/bipolar), memory/Alzheimer’s, and longevity. Efforts are being carried out to code the treatment and have them covered by the Insurance companies, thus reducing out of pocket expenses to clients/families, and thus helping prevent suicide and live healthier and safer lives.

In her closing remarks, Dr. Gotimukula, reminded AAPI fraternity of the importance of National Suicide Prevention Week, which “is an annual week-long campaign in the United States to inform and engage health professionals and the general public about suicide prevention and warning signs of suicide. She urged all “AAPI members, community organizations, the state and families to work together to work together in creating hope through action and committing to preventing suicide across America and around the world.” American Association of Physicians of Indian Origin (AAPI,) the largest ethnic organization in the United States, representing nearly 100,000 physicians and Fellows of Indian origin in the United States. For more details on AAPI and its programs, please visit: www.aapiusa.org