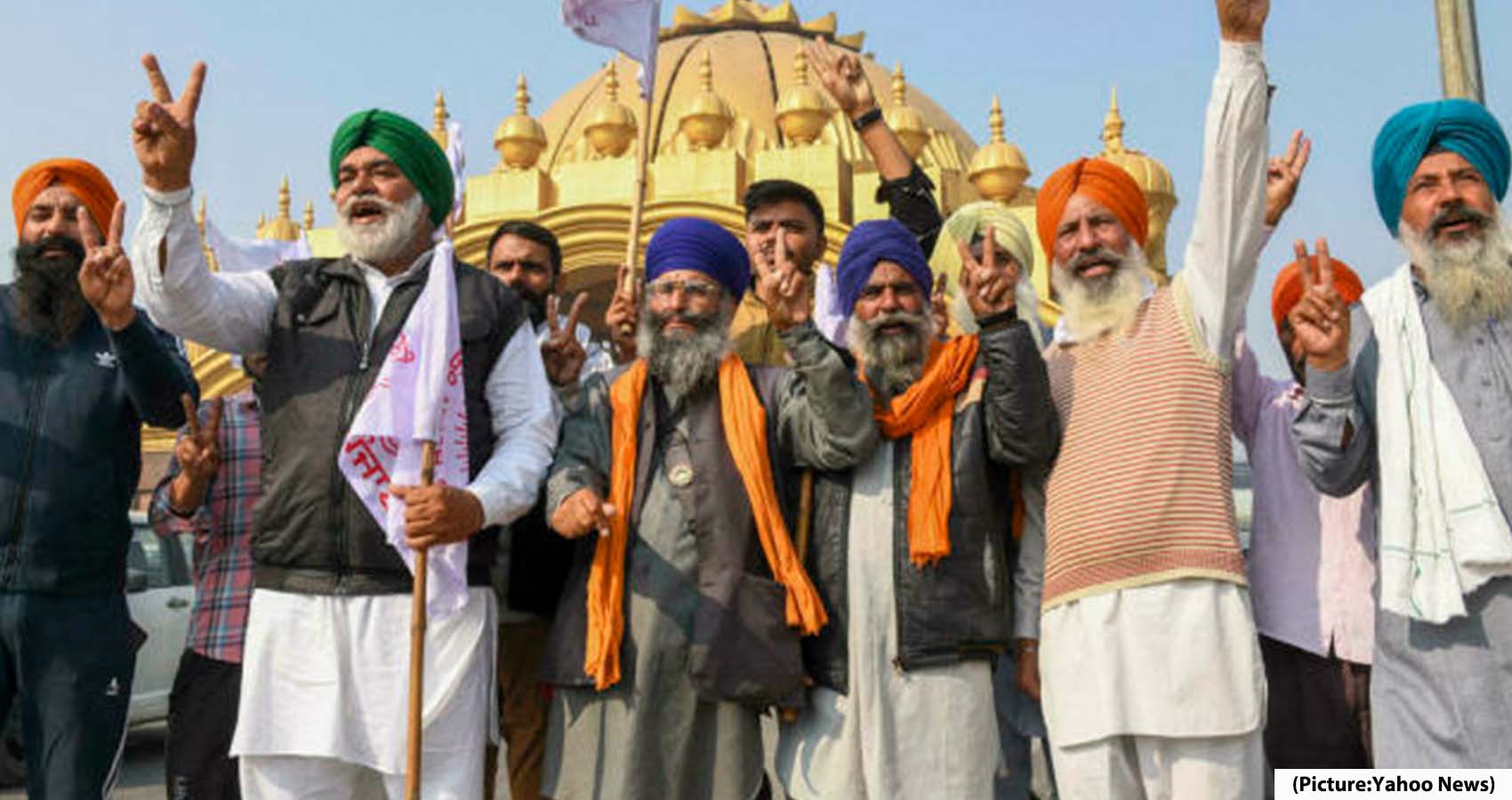 In a surprise announcement, Indian Prime Minister Narendra Modi announced on November 19th that his government will withdraw the controversial farm laws that prompted year-long protests from tens of thousands of farmers and posed a significant political challenge to his administration.

The three controversial farm laws at the heart of massive farmer protests across the country for over a year will be withdrawn, PM Narendra Modi announced on Friday. “In the Parliament session starting later this month, we will complete the constitutional process to repeal these three agricultural laws,” he added. “I apologise to the people of the country…there must have been some deficiency in our efforts that we could not convince some farmers Whatever I did, I did for farmers. What I`m doing, is for the country.”

Modi made the announcement during a televised speech that was broadcast live. He urged the protesters to return home and said the constitutional process to repeal the laws will begin in December when parliament sits for the winter session. “Let us make a fresh start,” Modi said during the address. 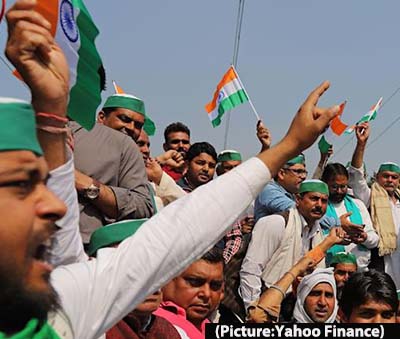 The laws were passed in September last year and the government had defended them, saying they were necessary to modernize India’s agricultural sector and would boost production through private investment. But the farmers protested, saying the laws would devastate their earnings by ending guaranteed pricing and force them to sell their crops to corporations at cheaper prices.

These perceived threats to their income terrified India’s farmers, who mostly work on a small scale: More than two-thirds of them own less than 1 hectare of land.

Clauses in the legislation also prevented farmers from resolving contract disputes in court, leaving them with no independent means of redress apart from government-appointed bureaucrats.

Samyukt Kisan Morcha, the group of farm unions organizing the protests, said it welcomed the government’s announcement. But the group said the protests would continue until the government assures them guaranteed prices for certain essential crops — a system that was introduced in the 1960s to help India shore up its food reserves and prevent shortages.

The government had so far yielded very little to the drawn-out demonstrations that led to unprecedented farmer protests across India and posed a major challenge to Modi, who swept the polls for the second time in 2019.

Modi’s decision is being seen as a political masterstroke ahead of some key state polls, particularly in Punjab, where growing alienation of the Sikh community over the laws was palpable.

Initially, Modi’s government had tried to discredit the Sikh farmers by dismissing their concerns as motivated by religious nationalism. Some leaders in Modi’s party called them “Khalistanis,” a reference to a movement for an independent Sikh homeland called “Khalistan” in the late 1980s and early 1990s. Such allegations backfired, further angering the farmers.

In November last year, the farmers escalated their movement by hunkering down on the outskirts of New Delhi, where they have camped out for nearly a year, including through a harsh winter and a coronavirus surge that devastated India earlier this year.

While the farmers’ protest movement has been largely peaceful, demonstrators in January broke through police barricades to storm the historic Red Fort in the capital’s center. Clashes with police left one protester dead and hundreds injured.

Dozens of farmers died due to suicide, hostile weather conditions and COVID-19 during the demonstrations.

Farmers form the most influential voting bloc in India — and are often romanticized as the heart and soul of the nation. Politicians have long considered it unwise to alienate them, and farmers are particularly important to Modi’s base. Northern Haryana and a few other states with substantial farmer populations are ruled by his party.

The laws: The Farmers (Empowerment and Protection) Agreement of Price Assurance and Farm Services Act, the Farmers Produce Trade and Commerce (Promotion and Facilitation) Act, and the Essential Commodities (Amendment) Act 2020 were passed in Parliament during the Monsoon Session last year.

Reason for repeal? No official reason has been cited but in the last session of Parliament, the Opposition had attacked the government strongly over the laws, and it led to acrimony and impacted the functioning of the Houses.

The decision also comes months before five states, including Punjab and Uttar Pradesh — a key section of the protesting farmers hail from the two states, along with Haryana — will hold Assembly polls. The BJP’s performance in the civic polls in Punjab earlier this year, and in Assembly byelections in Haryana were dismal.

It’s been 373 days (from Nov. 26, 2020) since farmers began their agitation. After several rounds of talks between the government and farmer unions failed to end the lockjam, the Supreme Court stayed the implementation of three farm laws.

Bharatiya Kisan Union leader Rakesh Tikait said: “The protest will not be withdrawn immediately, we will wait for the day when the farm laws are repealed in Parliament. Along with MSP, the government should talk to farmers on other issues too.”

Hardening their stand, the Samyukt Kisan Morcha Nov. 21 put forth six conditions in an open letter to Prime Minister Modi and threatened to continue the agitation if the government failed to discuss those six issues with the farmers.

The Open Letter with a threat to continue pre-planned rallies and morchas came after a marathon meeting of the 40-odd representatives of all the participating organizations of the SKM, two days after Modi announced that the government intends to repeal the three contentious farm laws passed by Parliament last year.

The open letter reminded the prime minister that the repeal of the three farm laws was not the only demand by the agitating farmers and that there were three other demands.

The farmers’ first and foremost demand is to make the minimum support price that is based on the formula of C2+50 percent (means 50 percent above the cost of production) as a legal right for all crops and for all farmers. The letter reminded the Prime Minister Modi that it was a committee under his chair that had in 2011 recommended this to the then prime minister and his government later announced it in Parliament too.

The second demand is to withdraw the draft Power Regulation (Amendment) Bill 2020/2021, which, the SKM said, the government had promised to withdraw but inserted it in the Parliament’s proceedings.

Removal of provisions to punish farmers (who burn stubble) under the Commission for Air Quality Management Act for Delhi and its Surrounding Regions Act, which did remove the provision that termed farmers as “criminal” but retained the Section 15 that can still punish the farmers.

The Morcha letter said they had much hope regarding these three demands but the prime minister’s address to the nation did not make any specific announcements regarding these, the SKM said, adding, “There are several other issues that have been raised during the last one year or so of our agitation, which too need to be looked into immediately.”

Cases that were lodged against hundreds of farmers from Delhi, Haryana, Chandigarh, Uttar Pradesh and many other states since June 2020 till now should be withdrawn with immediate effect; suspend and arrest Union Minister of State for Home Ajay Mishra Teni, who is an accused under section 120B in connection with the Lakhimpur Kheri tragedy (where four farmers among others were killed as a car mowed them down) and compensation and rehabilitation of the families of about 700-odd farmers who have lost their lives during the course of this agitation, the SKM said, and demanded land for a Shaheed Smriti Smarak (Martyrs’ Memorial) at Singhu Border.

Earlier in the day, at its first meeting at the Kisan Andolan headquarters at Singhu Border in north Delhi after the announcement made by the prime minister, SKM (the consortium of farmers organizations and other NGOs) had decided to continue with all the announced programs as per plan.

Opposition leaders, who earlier called the laws exploitative and supported the protests, congratulated the farmers. “The country’s farmers, through their resistance, made arrogance bow its head,” tweeted Rahul Gandhi, India’s main opposition party leader in Congress. “Congratulations on the victory against injustice!”