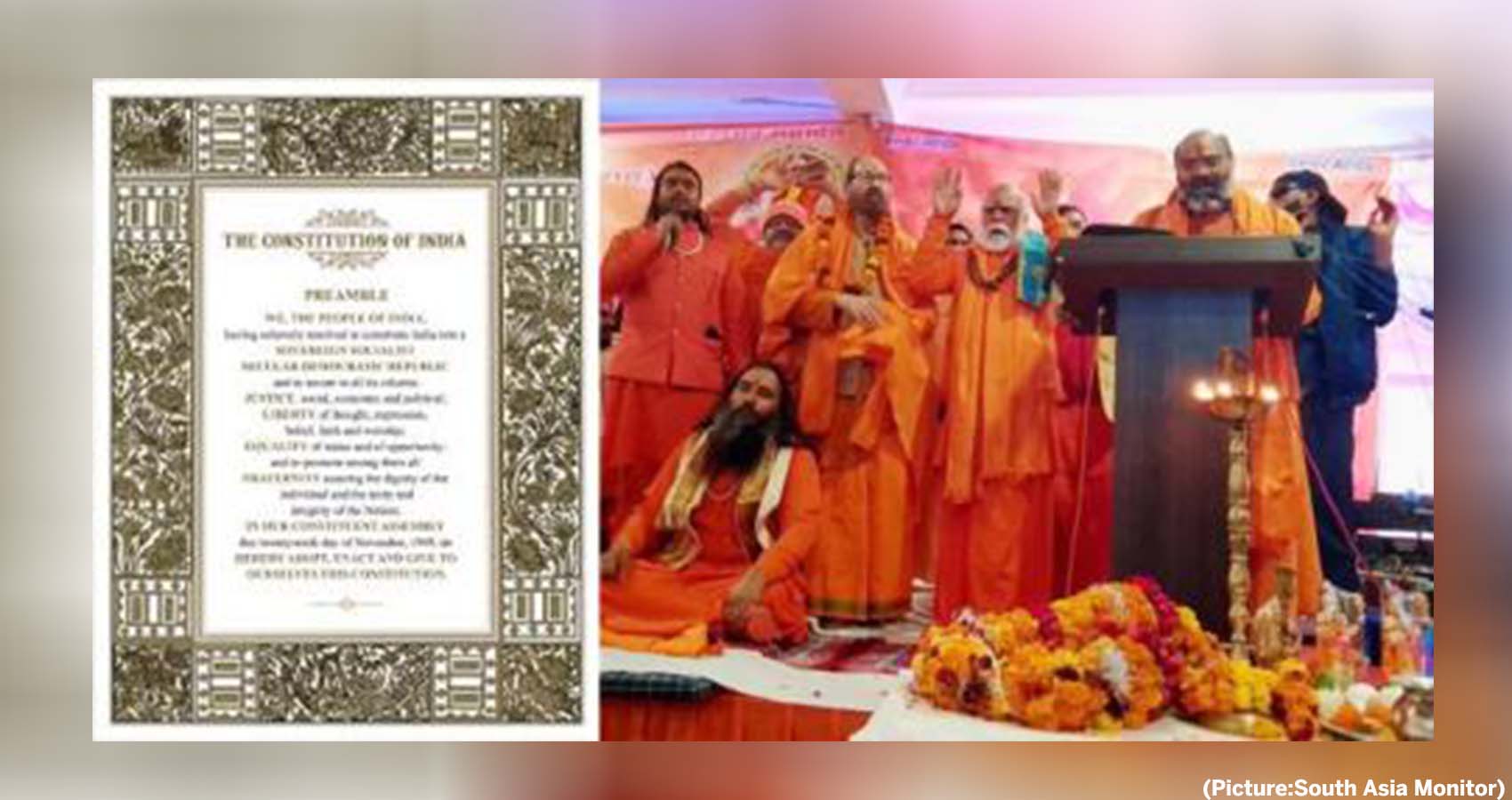 The values that are glorified today ironically are those that were always held anathema by classical Hindu society – majoritarianism, intolerance, hatred, and revanchism, writes Tarun Basu for South Asia Monitor

If there is despair and dark foreboding at the turn of the year in India, it is not just because the pandemic has engendered in all a feeling of existential confusion, or the political and social discourse is becoming more caustic by the day, but the spreading clouds of hate and inter-community ill-will that has taken hold of a nation always held up to the world as an exemplar of democratic pluralism and inter-faith harmony.

Hinduism, an eternal and inclusive religion, has been figuring in the global media for all the wrong reasons — lynching, hate speeches, attacks on minority institutions and places of worship, obstruction of their religious practices, call to violence against minorities – particularly Muslims who comprise over 14 percent of India’s 1.4 billion population and are the third-largest Muslim population in the world.

Although these actions and utterances go against the country’s secular constitution and violate some of its sacred principles, like freedom of worship, there has been no condemnation of these from anyone in the government, and in most cases the offenders have got away with impunity or slapped with mild charges that have not held up in courts.

Most hate actions and utterances have been in the name of protecting Hinduism, a religion practised by 82 percent of the nation and whose most sacred text, the Bhagavad Gita, is known for its wide catholicity and against absolutism.

“The Gita does not speak of this or that form of religion but speaks of the impulse which is expressed in all forms – the desire to find God and understand our relation to HIm,” Sarvepalli Radhakrishnan, the nation’s second President, one of its foremost thinkers and a renowned exponent of Hindu philosophy and its ancient texts, says in his scholarly work The Bhagavadgita.

“Hindu thinkers are conscious of the amazing variety of ways in which one may approach the Supreme, of the contingency of all forms….no manifestation is to be taken as absolutely true from the standpoint of experience; every one of them has some validity….The same God is worshipped by all….All manifestations belong to the same Supreme,” Radhakrishnan says.

Radhakrishnan, whose birthday on September 5 is celebrated as Teachers’ Day all over India, goes on to say that “(Only) the spiritually immature are unwilling to recognize other gods than their own. Their attachment to their creed makes them blind to the larger unity of the Godhead. The Gita affirms that though beliefs and practices may be many and varied, spiritual realization to which these are means is one.”

Radhakrishnan’s interpretations have validation in the teachings of Sri Ramakrishna Paramhansa, the 19th-century mystic saint who personally experienced all  the major religions and came to the conclusion that the world’s various religious traditions represented “so many paths to reach one and the same goal.

“Never insist what you profess is the sole truth and rest all fallacy. Hindus, Muslims, Christians – all are travelling in the same direction, albeit on different paths (Jato moth, too poth) – I have tried all known paths to God, and I accept them all,” Ramakrishna famously said.

That Hindu-majority India would travel down a path quite contrary to their sages’ teachings has confounded the cognoscenti, but has been debunked by the Hindu right and its vocal proponents who see the present sectarian politics as a chance to assert its majoritarianism, overturn the country’s secular constitution, which they say is an anachronism, reassert what they hold is the Hindu pride that they say was crushed by centuries of Muslim rule and “appeasement” of minorities under successive Congress-led governments since independence.

His disciple, Swami Vivekananda, in his famous speech at the Parliament of Religions in Chicago in 1893. said,”I am proud to belong to a religion which has taught the world both tolerance and universal acceptance. We believe not only in universal toleration, but we accept all religions as true.”

The present assault on minorities is seen to have the tacit support of the ruling BJP leadership of Prime Minister Narendra Modi, who has remained enigmatically silent despite a spate of anti-minority actions and utterances. These include shocking calls from self-proclaimed Hindu religious leaders calling for a “genocide” against Muslims, community support promised for such attackers, dubbing of Mahatma Gandhi as a “traitor”, and the spreading virus of degradation and vilification of Muslims, including its women, that has led to an atmosphere which analysts see as the cynical exploitation of a society’s fault lines for political gain, especially as the BJP faces crucial state elections in the coming months.

“That is not Hinduism. Hindutva is fundamentally the most un-Hindu set of beliefs and practices that you can imagine. And that they call themselves Hindutva which means Hindu-ness is an absolute travesty…,” rued opposition politician Shashi Tharoor, a former UN civil servant and author on books of Hinduism.

The values that are glorified today ironically are those that were always held anathema by classical Hindu society – majoritarianism, intolerance, hatred, and revanchism with the Hindu reactionary forces using the majority muscle to snuff out any opposition to what has been often called by those opposing such religious extremism as the “Talibansation of Hinduism”. It is a testing time for India, and the kind of country that future generations will inherit will depend a lot if the “silent majority” is able to assert itself.

As the scholar Rajmohan Gandhi wrote of his grandfather, the Mahatma’s core beliefs that in India, a person of any religious belief – a Hindu, a Muslim, a Christian, a Sikh, a Jew, a Zoroastrian, a Jain, a Buddhist, an atheist, an agnostic, whatever – had an equal right to India. Religion was one thing, national another.

Vice President is upset  Even India’s Vice President M. Venkaiah Naidu, a former BJP president, was constrained to call out the hate mongers, saying in a recent speech that “Hate speech and writings are against (the country’s) culture, heritage, tradition and Constitutional rights and ethos” and expressed his “disapproval of attempts to ridicule other religions and create dissensions in society”.

“What we are witnessing today is a deliberate and cynical attempt to resurrect painful wounds of the past, re-enact past contestations and prevent the consolidation of a common and equal citizenship, which is the foundation of a democracy,” India’s former Foreign Secretary and respected public intellectual Shyam Saran wrote recently in The Tribune.

“If these vile threats are tolerated and go unpunished and unchecked, the very idea of India that we have inherited and nourished through many challenges will cease to exist. This is a moment of peril for all Indians,” Saran warned.