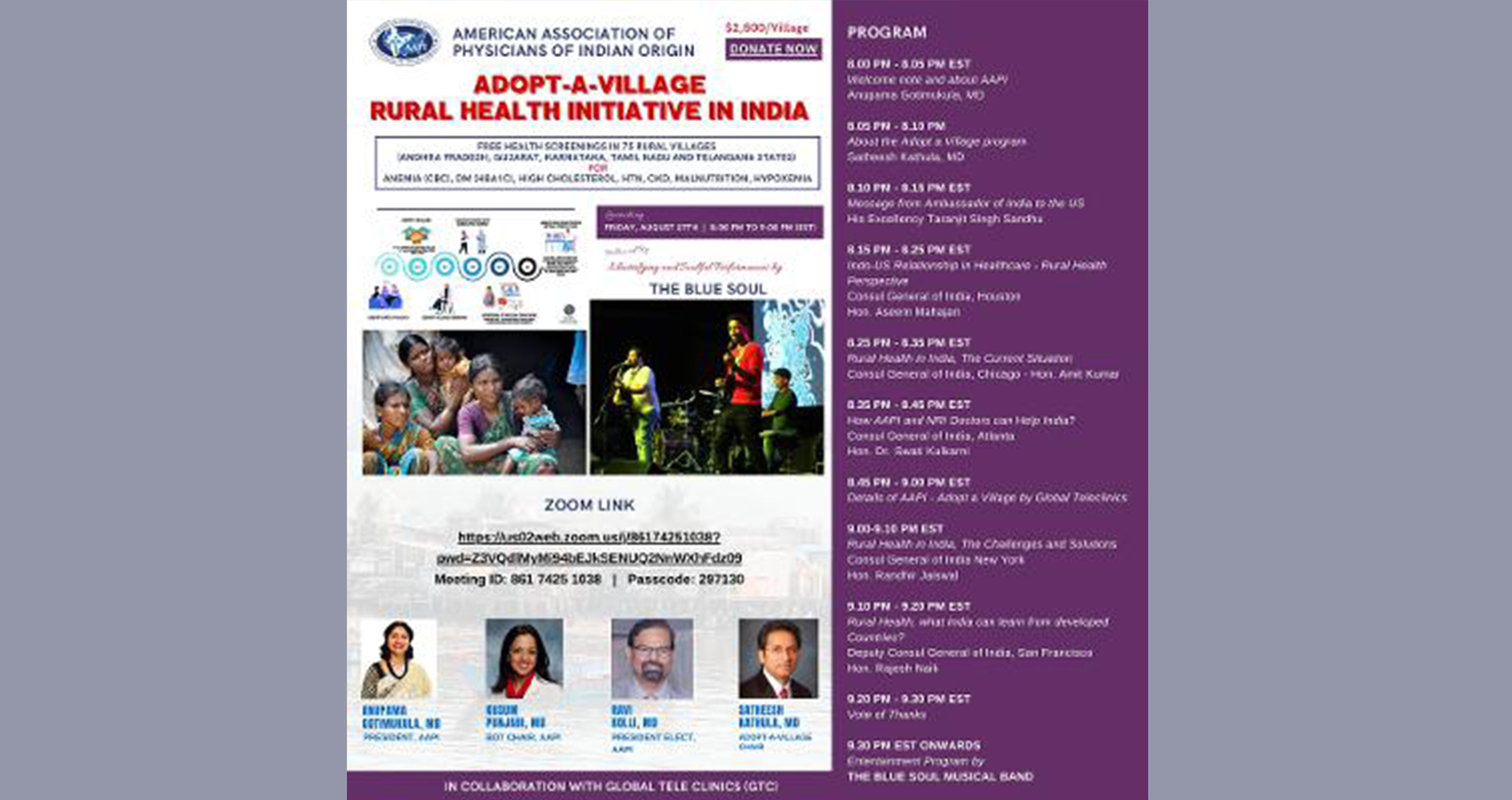 Continuing with its magnificent efforts to help their motherland, members of American Associati9on of Physicians of Indian Origin (AAPI), the premier medical organization in the United States initiated Adopt-A-Village, a Rural Health Initiative in India during a virtual launch event on Friday, August 27, 2021. Chaired by, Dr. Satheesh Kathula, the much needed and popular program has Dr. Anupama Gotimukula, Dr. Jagan Ailinani and Dr. Ram Singh as members of the Committee.

In a rare show of support for AAPI, honorable Consul Generals of Chicago, New York, Houston, Atlanta and the Deputy CG of San Francisco participated live during the launch of this noble initiative. Ambassador of India to US, Taranjit Singh Sandhu joined the meeting with his message and lauded the numerous efforts of AAPI for India, especially during the pandemic.

Dr. Anupama Gotimukula, President, AAPI, in her welcome address, referred to the objectives of Adopt-A-Village. “A lot of efforts is being put into this initiative, “Adopt a Village” Project where AAPI in collaboration with Global TeleClinics, Inc., plans to adopt 75 villages in honor of 75 years of India’s independence,” she said.  “As India celebrates her 75th anniversary Independence Day celebrations, AAPI has planned to adopt 75 villages in India spread across the states of Andhra Pradesh, Gujarat, Karnataka, Tamil Nadu and Telangana, where the rural people of India will be offered ‘Free Health Screenings in 75 Rural Villages’ for Anemia (CBC), DM (HbA1C), High Cholesterol, CKD, Malnutrition, Kidney Disease, Malnutrition, Obesity, and Hypoxemia.  Results analyzed by GTC and further action recommended by their team of experts will be also, followed up. This is a small contribution from AAPI to Mother India in celebration of Azadi Ka  Amrut Mahotsav.” Dr. Anupama thanked the AAPI members for their generous support for this noble work of AAPI and for sponsoring their ancestral villages and going back to their roots.

In his opening remarks, Dr. Satheesh Kathula, Chairman of AAPI’s Adopt A Village Program pointed out about the need for this noble initiative. He said, India has nearly 700,000 villages. Three out of four Indians and about 77 percent of the poor live in villages. The majority of the population has no access to safe drinking water and sanitation. The needs in these rural areas are unlimited and the scope to work are endless. “By adopting one village at a time and working with the government and NGOs, NRIs can make a difference,” he said. Dr. Kathula referred to some of the programs in place in several rural villages, including supply of Cloth mask, clean drinking water and free health care screening that has benefitted thousands of people Across India.

Dr. Ravi Kolli, President-Elect of AAPI, said, “While India has made substantial progress in health care as evidenced  by the fact that life expectancy in India at birth now is 71 years as opposed to 58 years in 1990 and 41 years in 1960, there are significant gaps and divergence in health metrics in different regions in India. India, thus needs to redouble and continue its efforts and dedicate resources to tackle these perennial challenges. The post graduate training of physicians specializing in Family Medicine in every teaching institution will create a motivated and well trained family physicians to address these deficits and deliver accessible, affordable, economical and continuous preventive and primary care to rural as well urban poor populations to raise health outcomes substantially all across India,” he said.

“An individual can make a tremendous difference in the lives of many in India by adopting a village,” said Dr. Jagan Ailinani, who was instrumental in founding this noble program and set an example by adopting his own birth village in the state of Telangana in India. “A majority of the NRI’s hail from villages and would like to do their part to bring progress to villages in our state and country.”

Dr. Ram Singh said: “NRIs can adopt the village they hail from originally and make a significant contribution towards its development. There is a real will and desire on the part of governments, both at the state and the center to work with NRIs and NGOs to bring development to rural India.”

Dr. Kusum Punjabi, Chair of AAPI BOT said, “Many of these projects and programs need regular funding, and management of resources. We are grateful to dozens of AAPI members who have committed to Adopting a village in India with an ongoing commitment for investment.”

Ambassador Taranjit Singh, in his message to AAPI members, said, “As India is entering 75th year of independence, honoring men and women, who fought for the freedom, we rededicate ourselves to build an India where the dreams and aspirations of India’s 13 billion people are realized.” He urged the Diaspora community to come forward to honor INDIA by joining in the year-long celebrations.

Dr. Jayesh Shah, past President of AAPI, introduced Consul General of India in Houston, Aseem Mahajan. In his address on “Indo-US Relationship In Healthcare -Rural Health Perspective” Ambassador Mahajan told the AAPI members: “You are true the heroes and partners with us, and you make us proud, especially during the critically vital Covid times.” Urging the Diaspora to contribute towards strengthening of India’s partnership with the US, Mr. Mahajan focused on India-US partnership on various health related issues, while stressing the many healthcare initiatives by the Government of India. “AAPI can play a big role in rural health, which has been a priority for the Government of India,” he said. He thanked and appreciated the many Doctors, who are already doing similar noble initiatives, helping the rural communities have access to clean drinking water. “We can work together, collaborating and sharing of knowledge and expertise, including Medical Education,” he told AAPI.

Dr.  Suresh Reddy, past President of AAPI and currently an elected Trustee of Oakbrook Village in Illinois, after introducing the Consul General of India in Chicago, Amit Kumar, announced that he is adopting his native village in the state of Telengana. In his address, Mr. Kumar spoke about “Rural Health In India, The Current Situation,” and focused on technological areas in healthcare development in the rural parts of India. “Your activities and the message to spread awareness on Covid and for providing PPEs to India are highly appreciated,” he told AAPI members, pointing to the fact that India has vaccinated over 600 million people and he hoped that India will offer vaccines to majority of India’s vast population soon.

Introduced by Dr. Sudhakar Jonnalagadda, immediate past President of India, Consul General of India in Atlanta Dr. Swati Kulkarni focused on “How AAPI and Doctors can Help India.” She said, “It’s important and laudable that you have undertaken to help India during the 75th anniversary of India’s Independence. Dr. Kulkarni shared her views on how AAPI and the government of India can collaborate in: Diplomacy for development, where “India needs overseas expertise, and you are best suited to offer,” she said, while calling upon Indian American Doctors to be part of India’s efforts to enhance the GDP. “India’s healthcare industry is growing rapidly there is more scope for growth with expanded pharma industry and medical tourism. She stressed the need for AAPI’s role in enhancing India-US political partnership, where AAPI is “a major stake holder,” she said.

Dr. Mukesh Nigam introduced Consul General of India in New York, Randhir Jaiswal. In his address on “Rural Health in India: The Challenges and Solutions” Ambassador Jaiswal said, “This noble initiative by AAPI has become more meaningful especially during the 75th anniversary of India’s Independence.” Reminding AAPI members of Modi’s call to rebuild a new India, he said, “AAPI’s initiative is even more meaningful and fits well into PM’s vision for India.” He said, ‘We applaud and thank AAPI for coming forward to help India, especially during the covid pandemic.”

Dr. Sujeeth Punnam, a renowned cardiologist introduced Deputy Consul General of India in San Francisco, Rajesh Naik. While speaking on “Rural Health, What India can learn from Developed Nations” Mr. Naik said, “AAPI has provided tremendous support as India and Indian community were struggling with the challenges of Covid. You rose to the occasion and came forward to help and support, which have been highly appreciated by the Diaspora.” During the 2nd Covid surge, AAPI stepped forward and have sent out Millions of Dollars of medical supplies to Indi, he said. While pointing to the many challenges of healthcare in rural India, Mr. Naik urged how AAPI could offer tele medical consultation in rural India, especially focusing on the preventive aspect of health in India. .

Dr. Anjana Samadder, Vice President of AAPI, said, “By adopting one village at a time and working with the government and NGOs, NRIs can make a huge difference in the lives of millions of people in India. Each project will involve a tripartite partnership between the NRI, state government and a local NGO.”

Dr. Krishan Kumar, Treasurer of AAPI pointed out, “The cost for adopting a village depends on various factors, including the population of the villages, the services that are required and what one is willing to commit to for the welfare and progress of the village one is committing to adopt.”

Dr. Lokesh Edara, chair for AAPI’s global initiative, while focusing on International medicine and how India is lagging behind in medical care, while urging the Government of India, pointed to how India needs to focus on Post Graduate Medical professionals rather than having Doctors with under graduate degree alone.

Dr. Gokula Murthy spoke about “Adopt-A-Village” by Global tele-clinics and shared with the audience as to how his firm has strived on ‘Blending medicine and technology,” while pointing to the “great opportunity to enhance the effectiveness of tele-health through awareness, education and sustainable development in all villages.”

There is no instant solution for rural India’s myriad problems. But by adopting one village at a time and working with the government and NGOs, NRIs can make a difference. Over time, an improved village could lead to an improved region, state and country.

Physicians of Indian origin are well known around the world for their compassion, passion for patient care, medical skills, research, and leadership. They have excelled in their fields of medicine, and thus have earned a name for themselves through hard work, commitment and dedication to their profession and the people they are committed to serve. Not satisfied with their own professional growth and the service they provide to their patients around the world, they are in the forefront, sharing their knowledge and expertise with others, especially those physicians and leaders in the medical field from India.

Dr. Gotimukula, urged “AAPI members to consider joining this movement and adopt a village. May be your own village of origin. AAPI will work with you in coordinating the efforts and through the support system we have in several states, will help you achieve this goal of giving back to our motherland.” AAPI members/families can sponsor a Village by emailing to: aapipresident@aapiusa.org and info@aapiusa.org.  For more details, please do visit: www. aapiusa.org