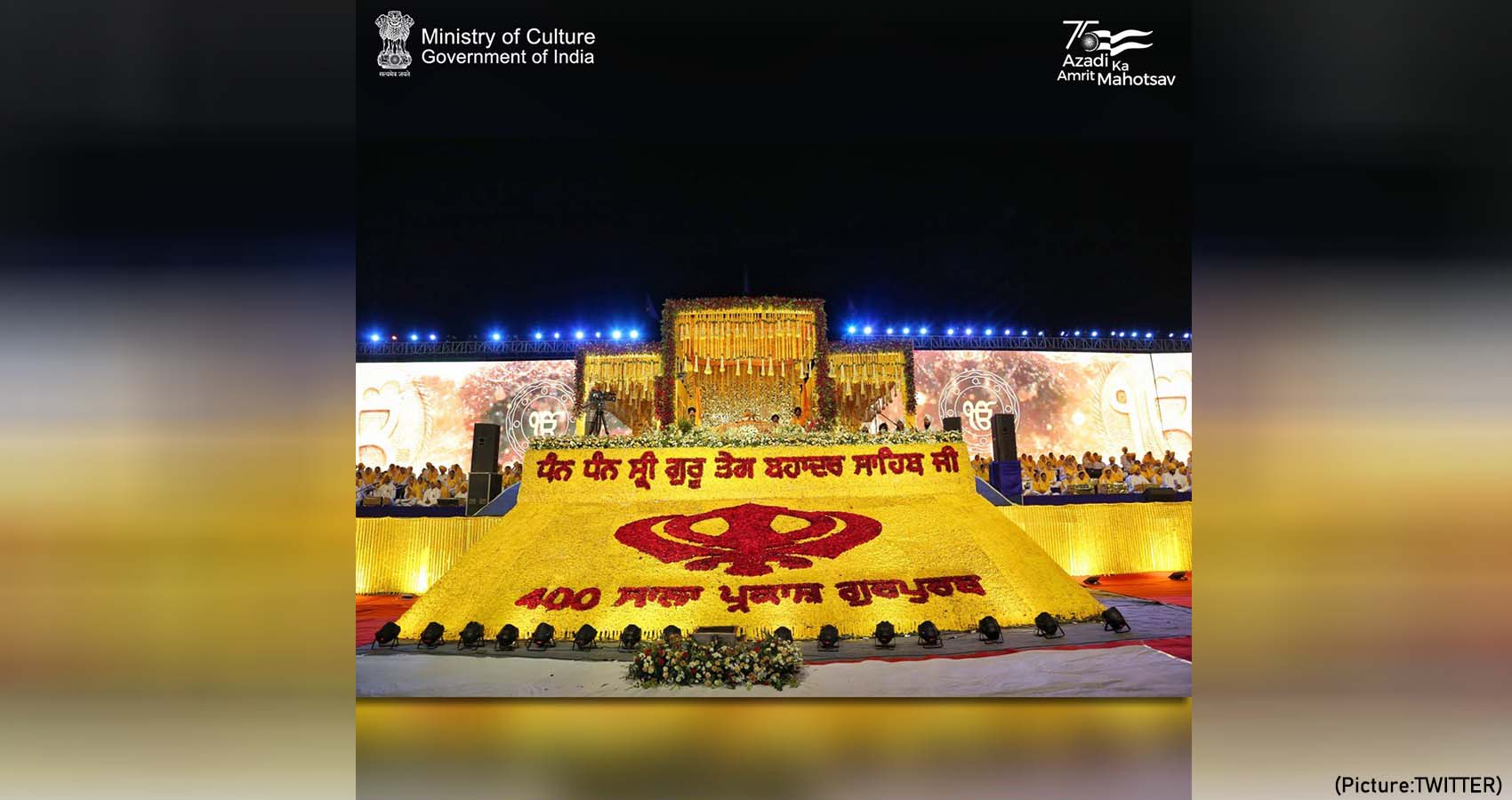 Joyful and spiritual vibes filled the atmosphere when a Kirtan reverberated through the lawns of the Red Fort during the celebration of the 400th Parv of the 9th Guru of Sikhism, Guru Tegh Bahadur on  April 21, 2022.

400 ragis performed Sabad Kirtan on this auspicious occasion. This program was organized in coordination with the Ministry of Culture and Tourism and Delhi Sikh Gurudwara Management Committee.

As per reports, the crowd swelled with excitement as Modi entered the beautifully lit and decorated ground covering his head with a saffron color cloth. Modi, who was clad in white kurta and churidar, bowed his head in front of the Guru Granth Sahib thrice and prayed before the almighty. PM Modi said, Hearty congratulations to all of you, to all the people who have faith in Guruvani all over the world, to all the countrymen on the occasion of Prakash parv. 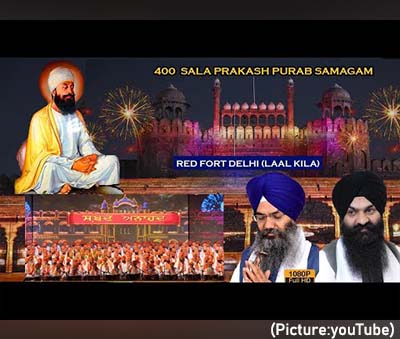 A magnificent stage, which was made of myriad colours of flowers, including rose, marigold, tulip and others, was set up in the middle where Guru Granth Sahib was kept. Two more huge stages were set up on both sides of the Guru Granth Sahib where 400 Ragis performed Kirtan in unison with large LED screens in the background.

Modi sat on the ground and listened to the Kirtan. The crowd was getting frenzy to catch a glimpse of the prime minister and shouted “Jo Bole So Nihal, Sat Sri Akal” slogan from the background.

Modi started and ended his speech with “Wahe Guru ji ka Khalsa, Wahe Guru ji ki Fateh”. As Modi came to speak on the dais, the people stood at their place and started shouting “Jo Bole So Nihal, Sat Sri Akal”. Security personnel and volunteers deployed there had to toil hard to control the swelling crowd.

In the middle, where Guru Granth Sahib was kept, a gorgeous stage composed of various colours of flowers, including rose, marigold, tulip, and others, was built up. On both sides of the Guru Granth Sahib, two more massive stages were built up, with 400 Ragis performing Kirtan in unison in front of gigantic LED screens.

“It is a very special moment for us as we are celebrating the 400th Prakash Parv of Sri Guru Tegh Bahadur at Red Fort. It is the same place from where the very order of executing our 9th Guru Sri Tegh Bahadur was issued by Mughal emperor Aurangzeb. “What else can we ask for?” said Dileep Singh Sandhu, a septuagenarian who attended the event.

Modi emphasized the historical significance of the Red Fort, which he claimed has witnessed Guru Tegh Bahadur’s sacrifices. Another observer stated that it was the first time that such a large-scale gathering was staged on the Red Fort lawns to commemorate any Sikh Guru’s birth anniversary.

“Today, my excitement knows no bounds as Sri Guru Tegh Bahadur’s heroic story is being told at the very place where his execution was ordered. “It’s a proud time for me,” Ramneek Kaur, another Janakpuri visitor, said. Artefacts relating to Guru Tegh Bahadur and his life events were displayed in a museum put up on the Red Fort lawns.