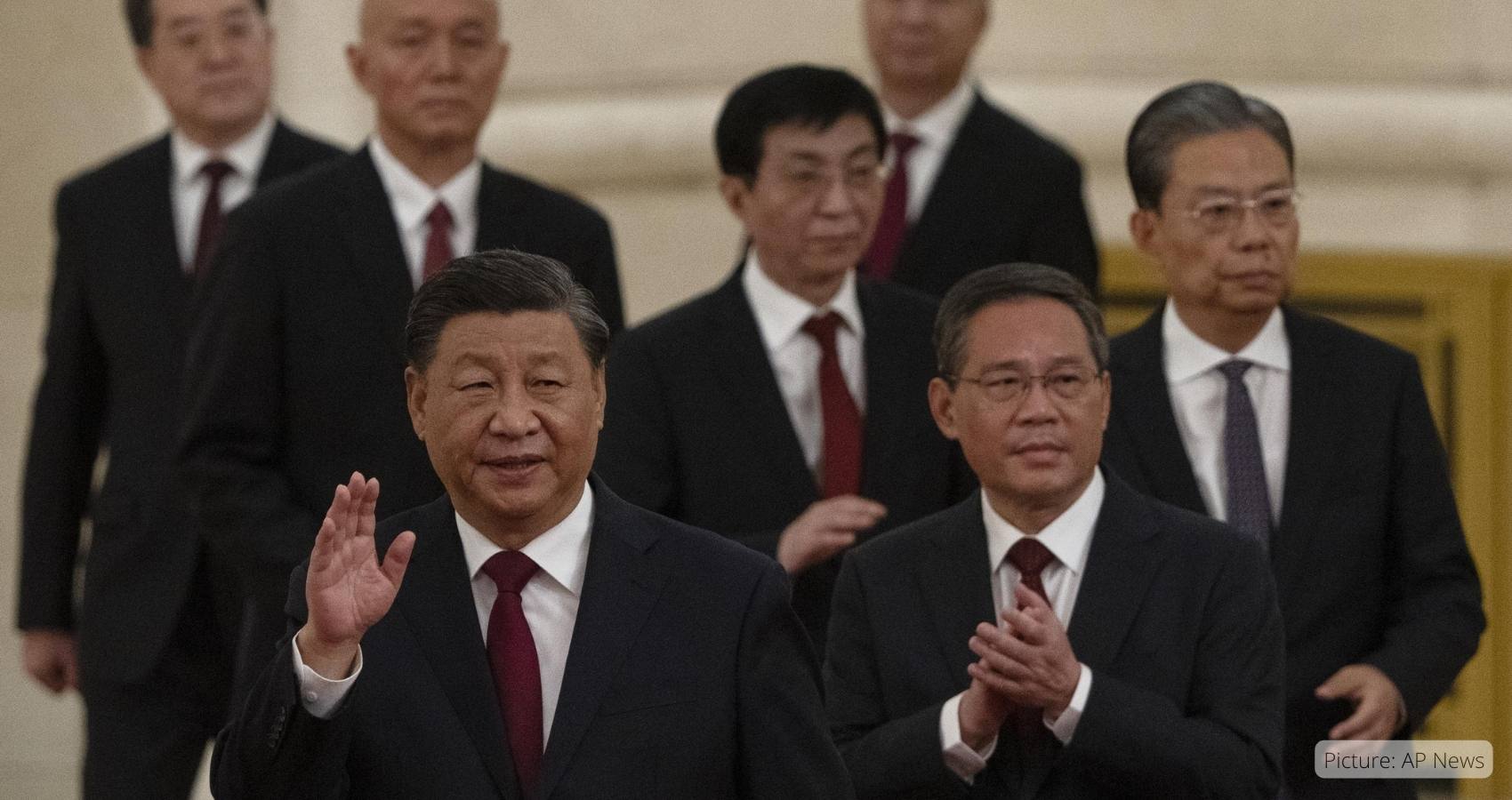 (AP) —President Xi Jinping, China’s most powerful leader in decades, increased his dominance on Oct. 23rd, 2022 when he was named to a 3rd term as the head of the ruling Communist Party in a break with tradition as he promoted his allies who support his vision of tighter control over society and the struggling economy.

Xi, who took power in 2012, was awarded a third five-year term as general secretary, discarding a custom under which his predecessor left after 10 years. The 69-year-old leader is expected by some to try to stay in power for life.

The party also named a seven-member Standing Committee, its inner circle of power, dominated by Xi allies after Premier Li Keqiang, the No. 2 leader and an advocate of market-style reform and private enterprise, was dropped from the leadership Saturday. That was despite Li being a year younger than the party’s informal retirement age of 68.

“Power will be even more concentrated in the hands of Xi Jinping,” said Jean-Pierre Cabestan, a Chinese politics expert at Hong Kong Baptist University. The new appointees are “all loyal to Xi,” he said. “There is no counterweight or checks and balances in the system at all.”

The world faces the prospect of more tension with China over trade, security and human rights after Xi Jinping, the country’s most powerful leader in decades, awarded himself another term as leader of the ruling Communist Party.

Xi has tightened control at home and is trying to use China’s economic heft to increase its influence abroad. Washington accused Beijing this month of trying to undermine U.S. alliances, global security and economic rules. Activists say Xi’s government wants to deflect criticism of abuses by changing the U.N.’s definition of human rights. 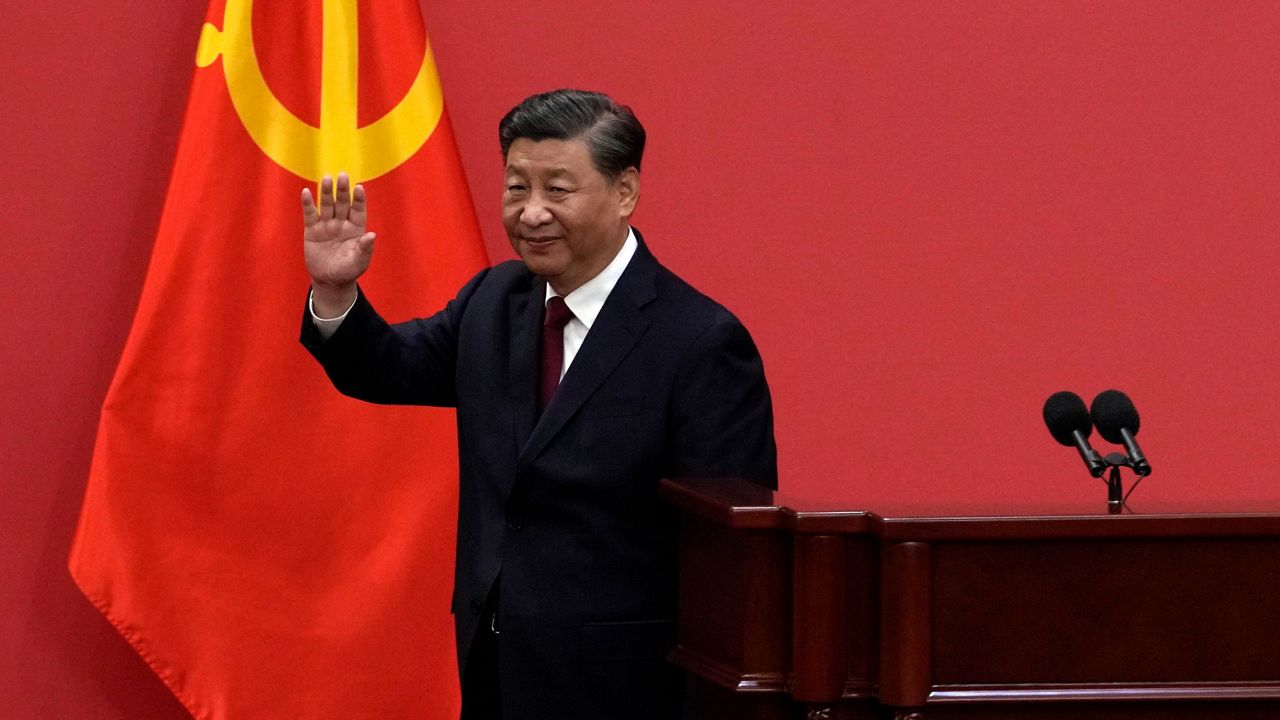 Xi says “the world system is broken and China has answers,” said William Callahan of the London School of Economics. “More and more, Xi Jinping is talking about the Chinese style as a universal model of the world order, which goes back to a Cold War kind of conflict.”

At a Communist Party congress that wrapped up Saturday, Xi gave no sign of plans to change the severe “zero-COVID” strategy that has frustrated China’s public and disrupted business and trade. He called for more self-reliance in technology, faster military development and protection of Beijing’s “core interests” abroad. He announced no changes in policies that have strained relations with Washington and Asian neighbors.

Xi says “the world system is broken and China has answers,” said William Callahan of the London School of Economics. “More and more, Xi Jinping is talking about the Chinese style as a universal model of the world order, which goes back to a Cold War kind of conflict.”

At a Communist Party congress that wrapped up Saturday, Xi gave no sign of plans to change the severe “zero-COVID” strategy that has frustrated China’s public and disrupted business and trade. He called for more self-reliance in technology, faster military development and protection of Beijing’s “core interests” abroad. He announced no changes in policies that have strained relations with Washington and Asian neighbors.

By 2035, the Communist Party wants economic output per person to match a “medium-level developed country,” Xi said in a report to the congress. That suggests doubling output from 2020 levels, according to Larry Hu and Yuxiao Zhang of Macquarie, an Australian financial services group. Meanwhile, however, the ruling party is building up subsidy-devouring state industry and tightening control over entrepreneurs who generate wealth and jobs. That prompts warnings that economic growth that sank to 2.2% over a year earlier in the first half of 2022 will suffer. The economy faces challenges from tension with Washington, curbs on China’s access to Western technology, an aging population and a slump in its vast real estate industry.

“If top leaders take the target seriously, they might have to adopt a more pro-growth policy stance,” Hu and Zhang said in a report. Analysts are watching for details after the party’s Central Economic Work Conference in early December. Xi promised to “build China’s self-reliance and strength in science and technology.”

He gave no details, but earlier efforts to reduce reliance on the West and Japan by creating Chinese sources of renewable energy, electric vehicle, computer and other technologies have prompted complaints that Beijing violates its free-trade commitments by shielding its companies from competition. American officials worry Chinese competition might erode U.S. industrial leadership. China faces growing limits on access to Western technology, especially from the United States, which warns it might be used to make weapons. China is building its own chip industry, but analysts say it is generations behind global leaders. Beijing doesn’t appear to be trying to isolate China but wants to reduce strategic unease by catching up with other countries, said Alicia Garcia Herrero of Natixis, a French investment bank. She said that will involve increased state-led investment. “That is going to create some tension,” she said.

Xi says “external and internal security” are the “bedrock of national rejuvenation.” In a speech that used the word security 26 times, he said Beijing will “work faster” to modernize the party’s military wing, the People’s Liberation Army, and “enhance the military’s strategic capabilities.” China already has the world’s second-highest military spending after the United States and is trying to extend its reach by developing ballistic missiles, submarines and other technologies. Xi refused to renounce the use of force to unite Taiwan with the mainland. Xi also called for improved security for supplies of energy, food and industrial goods. The party also sees “ideological security” as a priority, which is leading to more internet censorship.

Beijing increasingly uses its economic muscle as the biggest trading partner for all of its neighbors as leverage in politics and security. China blocked imports of Australian wine, meat and other goods after its government called for an investigation into the origins of COVID-19. Beijing tried unsuccessfully to persuade 10 Pacific island governments to sign a security pact this year, but is making inroads with some. Police officers from the Solomon Islands are being trained in China. Beijing wants a “China-centered security system,” said Callahan.

“Beijing wants to be a world leader, and part of that, according to Beijing, is to be a leader in the hard politics of global security.” Chinese diplomats, in a trend dubbed “wolf warrior diplomacy,” are more confrontational and sometimes violent. This month, Chinese diplomats in Manchester, England, beat a protester after dragging him onto the grounds of their consulate. Diplomats have “carried forward the fighting spirit,” said a deputy foreign minister, Ma Zhaoxu. He said the diplomatic corps will “improve its fighting skills and always stand at the forefront of safeguarding national interests and national dignity.”

COVID-19: Xi gave no indication China’s “zero-COVID” strategy might ease despite public frustration with its costs. While other countries have eased travel curbs, China is sticking to a strategy that has kept infection rates low but shut down major cities. The party newspaper People’s Daily tried to dispel expectations of a relaxation once the congress ended. The strategy “must be sustained,” it argued. Public health experts say more of the elderly need to be vaccinated before the ruling party can relax the COVID-19 restrictions. That might take months. Forecasters say that means it might be the end of 2023 before controls might ease.

CLIMATE: Xi promised a “proactive and steady” approach to reducing climate-changing carbon emissions, but at the same time the ruling party is increasing coal production to avert a repeat of last year’s power shortages and blackouts. A Cabinet official said coal output will rise to 4.6 billion tons in 2025. That would be 12% more than 2021. Xi said in a 2020 speech to the United Nations that China’s emissions should peak in 2030 but didn’t say at what level. China already emits more carbon than the United States and other developed economies combined, according to Rhodium Group. China is building more coal-fired power plants, which activists warn might cause higher emissions. Meanwhile, Beijing suspended a climate dialogue with Washington in August in retaliation for House Speaker Nancy Pelosi’s visit to rival Taiwan.