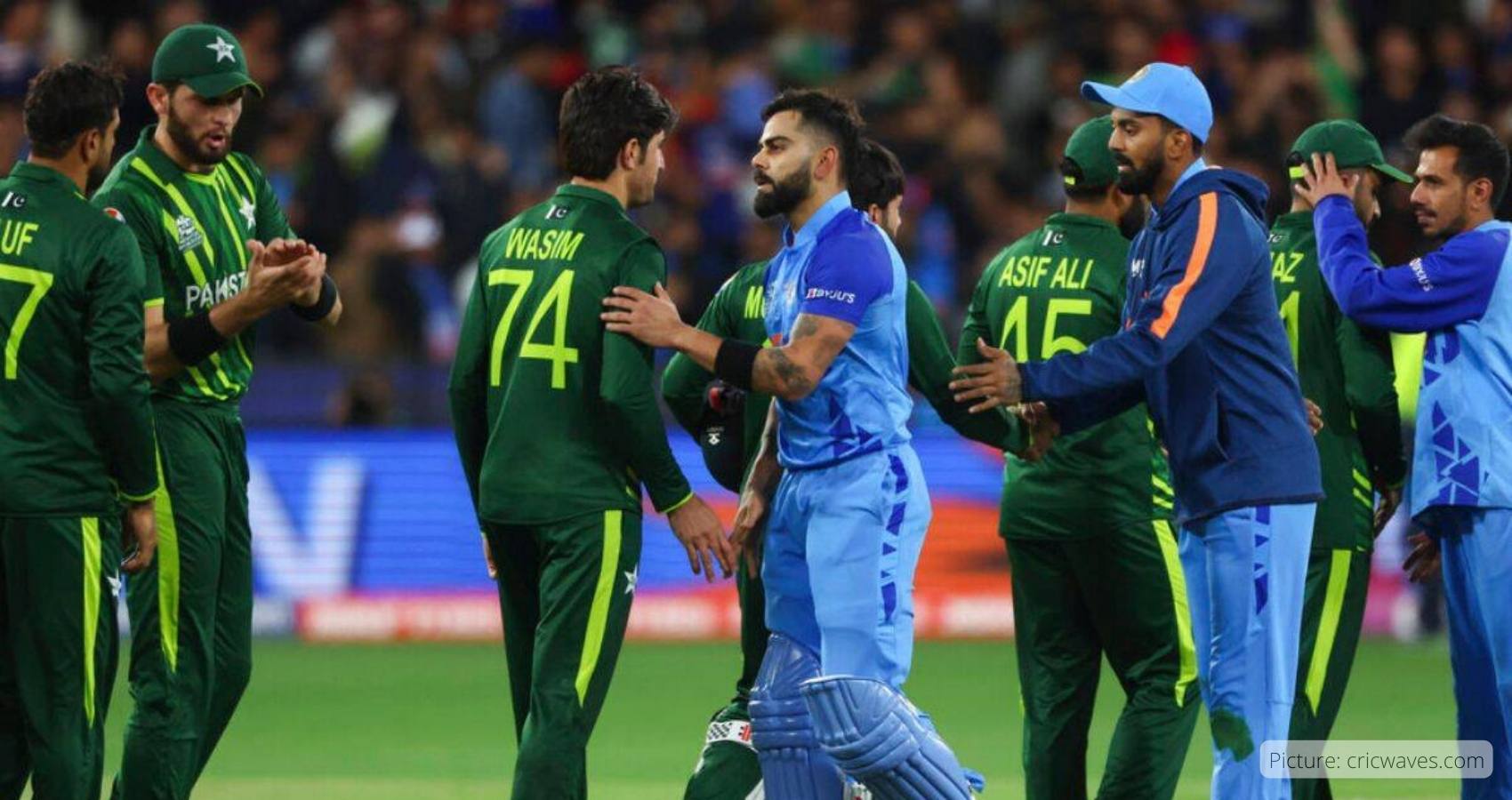 In the build-up to the India-Pakistan Super 12 clash of Mens T20 World Cup at a sell-out Melbourne Cricket Ground, rain threatened to disrupt the biggest match of the tournament. But it set the base for one of the most thrilling cricket matches of the year.

With 90,293 fans at the iconic stadium and more than crore fans tuning in from around the world, the stage was set for something surreal to happen on the fourth Sunday of October. There was awesome swing, extra bounce, tearaway speed, momentum shifts, unreal strokeplay and spine-tingling drama on display on the eve of Diwali.

The biggest fireworks for the match, though, came from Virat Kohli’s bat which lit up the Melbourne night sky. The talismanic batter re-iterated why he is one of the best chasers in cricket, slamming an unbeaten 82 off just 52 balls and powering India to an incredible four-wicket victory over Pakistan in their first Group 2 match.

After the right-left fast-bowling duo of Hardik Pandya and Arshdeep Singh picked three wickets each to restrict Pakistan to 159/8 in their 20 overs, Kohli and Hardik Pandya (40) shared a match-winning stand of 113 off 77 deliveries, lifting India from 31/4 to chase 160 on the last ball to get their campaign off to a winning start.

As India scored 55 runs in 11-15 overs, Pakistan brought back Haris Rauf and Naseem Shah, who gave away just six runs each in the 16th and 17th overs respectively. With 48 needed off the last three overs, Kohli brought up his fifty by fetching a short ball from outside the off-stump to pull Shaheen Shah Afridi through mid-wicket for four and ended the over with another four, swivel-pulled over short fine leg.

Kohli then smacked back-to-back sixes off Rauf in the 19th over — a straight loft down the ground was followed by using the pace of the ball to flick off wrists over fine leg – to make it 16 runs needed off the final over. 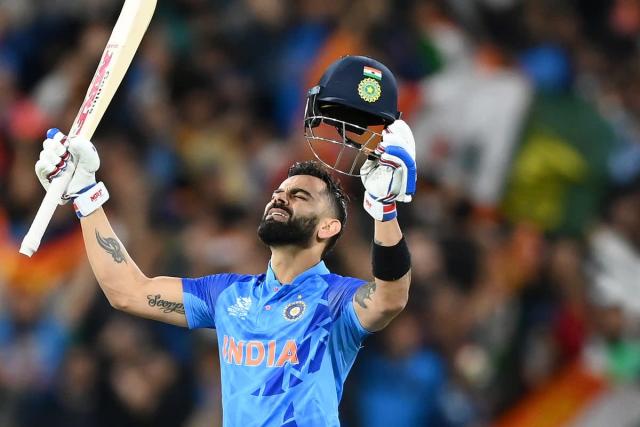 Mohammad Nawaz dealt a huge blow on the first ball of the final over when Pandya miscued the slog and the thick edge went to cover-point. On the fourth ball, Kohli smacked a waist-high full toss high over a deep square leg fence for six, which was on a no-ball.

In pursuit of 160, India had a shaky start when K.L Rahul chopped onto his stumps off Naseem Shah in the second over. Two overs later, Haris Rauf had Rohit Sharma poking tentatively at a 145kph length ball and a thick edge flew to the first slip, who dived low for a sharp catch.

Suryakumar Yadav sweetly punched a drive off Rauf and then pulled off the front foot over mid-wicket to collect a brace of fours. But the right-arm pacer had the last laugh as his back of the length ball on stumps cramped Suryakumar for room, who looked to cut the ball away.

All he could do was to nick behind to the keeper, leaving India at 26/3 in 5.3 overs. Things went from bad to worse for India as a mix-up in the middle for a non-existent single resulted in run-out of Axar Patel.

Kohli and Pandya took some time before the latter drilled a straight drive off Shadab and smacked two sixes over long-on and deep mid-wicket off Nawaz, sandwiched between Kohli launching a glorious six over long-on to make it 20 runs off the 12th over.

Apart from collecting plenty of twos with Pandya, Kohli brought out his deft touch with a fine glance off Shaheen, cutting off his wrists past deep cover off Shadab and flicking past a diving short fine-leg off Shah to collect three quick fours, thus paving the path for him to be smiling with his arms aloft. It was a masterclass in chasing in front of a packed MCG.

Earlier, electing to bowl first, Bhuvneshwar Kumar found some swing in the opening over. Arshdeep bowled a perfect first delivery in his T20 World Cup debut by trapping Babar Azam lbw for a golden duck and then cramped Mohammad Rizwan for room on the hook, hurrying him for pace and extra bounce as the top edge was caught by fine-leg.

From 15/2 in four overs, Ahmed (51) and Masood (52 not out) set about resurrecting Pakistan’s innings, sharing a 76-run partnership for the third wicket. The change in gears came when Ahmed hit four sixes off six balls between the 11th and 12th overs — once off Ravichandran Ashwin and thrice against Axar Patel — to reach his fifty in 32 balls.

But Shami came back in the 13th over trap Ahmed plumb lbw. Pandya then took over to have Shadab and Haider Ali holing out to the outfield within five balls. He followed it up by cramping Nawaz for room and nick behind to the keeper.

Arshdeep struck on the fourth ball of his second spell, bouncing out Asif Ali and giving the keeper a simple catch off the glove edge. Masood cracked consecutive fours off Shami to bring up his third T20I fifty. Though Shaheen and Rauf applied finishing touches with some boundaries, 159 proved to be insufficient for Pakistan to keep Kohli and India away from victory.

Hectic preparations are underway at the Congress headquarters for the ceremony planned for October 26th, 2022, where party president Sonia Gandhi will hand over the baton to her successor, Mallikarjun Kharge, after India’s Congress party elected the experienced Dalit leader Mallikarjun Kharge as its president last week.

The first “non-Gandhi” to hold this post in 25 years, the veteran Congressman defeated diplomat-turned-politician Shashi Tharoor by a resounding majority. Of the total 9,385 votes cast, Kharge received 7,897 votes. Tharoor still surprised many by bagging 1,072 votes. Some 416 votes were declared invalid. Stating that “the process of revival of Congress has truly begun,” Tharoor has assured Kharge of all support.

Kharge’s victory is historic because he succeeds Sonia Gandhi, the longest-serving party leader, who has been in office since 1998, with the exception of the two years between 2017 and 2019 when Rahul Gandhi presided. Kharge, an 80-year-old from the lowest rung of India’s caste system, is seen as a loyalist of the Gandhi family, which has produced three Indian prime ministers and is expected to retain its clout over the party.

That Kharge had the full support of the Gandhis was evident when outgoing President Sonia Gandhi and her daughter Priyanka Gandhi Vadra visited Kharge’s home to congratulate him after his victory. Rahul Gandhi, who is in the midst of a countrywide long march, the “Bharat Jodo Yatra” (Unite India March), congratulated Kharge and lauded him for his “experience and ideological commitment” as well as his “democratic vision.”

The Congress hopes to revive its flagging fortunes with a new leader after losing two general elections and control of some state assemblies to Prime Minister Narendra Modi’s Bharatiya Janata Party (BJP).

“The most important issues facing the country right now is inflation, unemployment, a widening divide between the rich and poor and a growing environment of hatred spread by the ruling government,” Kharge told reporters after his win.

An Ambedkarite-Buddhist who has been with the Congress for over five decades, Kharge is taking over the leadership at a time when the party, rattled by defeats, disunity and revolts, is desperately looking for a national revival.

He is the first full-time Congress president in three years, succeeding Sonia who has been at the helm since 1998, except for one and a half years between 2017 and 2019 when Rahul was party chief. With his vast experience in governance and the organisation, Kharge assumes charge at a time when the Congress is at its weakest. The party is reeling from a series of electoral setbacks and the relentless exodus of leaders.

Kharge’s immediate challenge: the assembly polls in Gujarat and Himachal Pradesh later this year. In Gujarat, the party is widely viewed as having frittered away the gains of the previous polls, in which it had won 77 of 182 seats. There has since been an exodus of leaders from the Congress, which now has to deal with an aggressive Aam Aadmi Party as well.

Despite the change at the top of the Congress, the BJP, which advocates a hard-right, nationalist stance, appears to be in a strong position to win a third successive term in a general election due by 2024.

The 137-year-old Congress, which helped win India’s independence from colonial power Britain and then dominated politics for decades, has long championed a secular polity.