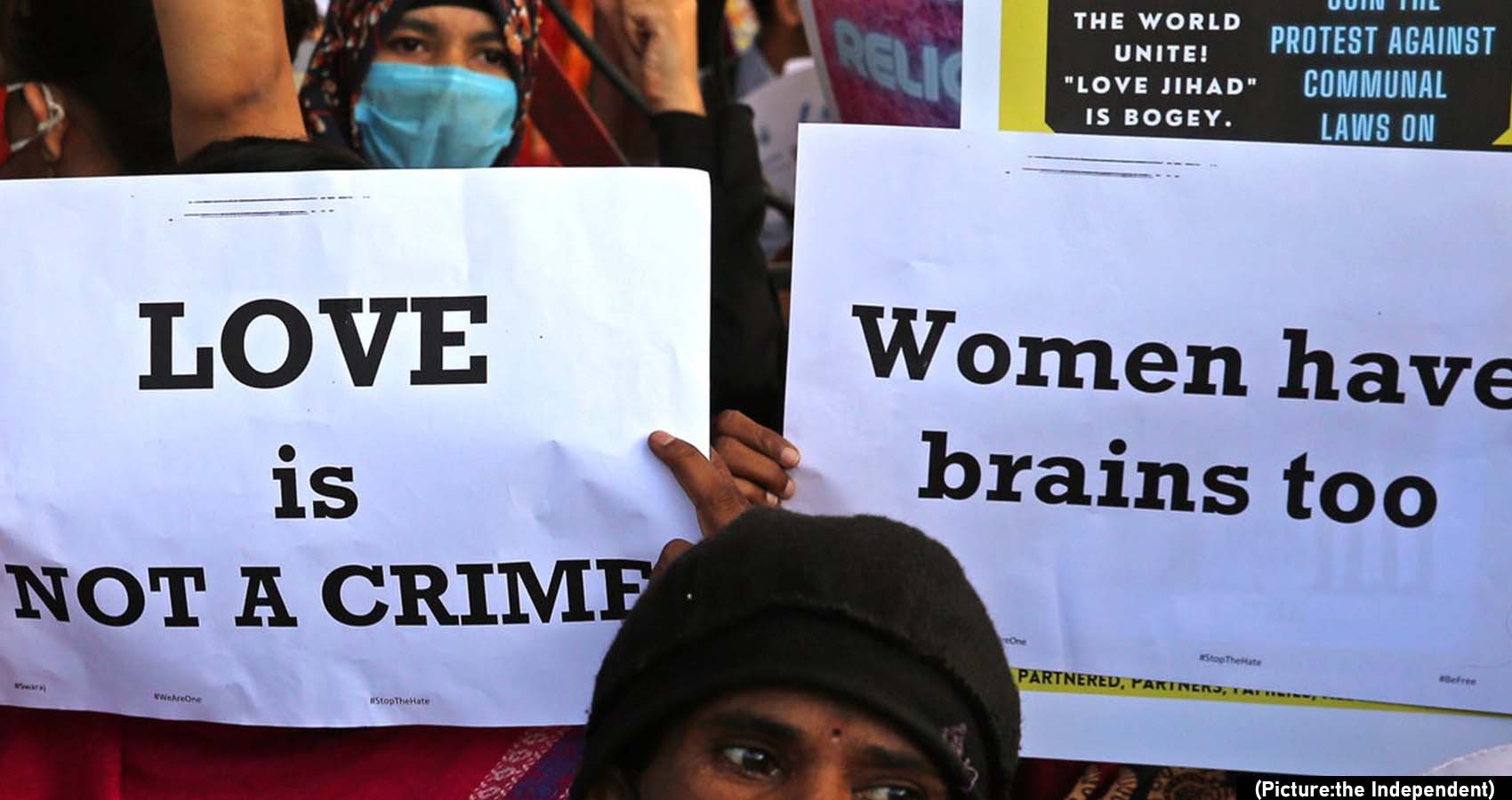 When Ali (name changed) proposed to his best friend, little did he know that her parents would take six years to agree to their alliance because he was born into a Muslim family, and they were Hindus. “Everything they had heard all their life pointed to Muslims being violent, conservative, forceful etc. The idea of me being Muslim and marrying their Hindu daughter was too much to fathom despite them thinking of me highly,” he said in an interview with IPS.

This story is one of the few where the end was ‘happy’, and the family did not bow to societal pressure. However, if one looks at recent propaganda and the increase of Islamophobia in India, one concept which has added fuel to this fire is the fictitious propaganda of ‘Love Jihad’. Love Jihad is a term propagated by religious fundamentalist groups, alleging a conspiracy by Muslim men to convert non-Muslim girls in the guise of love.

The propagation of this concept is perhaps one reason why Ali had to struggle to convince his wife’s parents that his religion had nothing to do with his love for their daughter. While it may be easy to counter such a narrative, socially, with more awareness, what has made this term popular and the hate associated with it resulting, in some cases, in violence is the support it has garnered from right-wing political parties and their success at turning such marriages into a criminal offence.

“Social media platforms, such as Facebook and Twitter, host hundreds of pages and handles which post unverified incidents as ‘real news’ of Hindu women being deceived by Muslim men into marrying them and ending up either dead or as captives forced to convert and live in the homes of their supposedly violent Muslim husbands,” says Ashwini KP, an academic and rights activist based in Bangalore.

Challenging the provisions of one such draconian state law passed in the state of Gujarat as Gujarat Freedom of Religion (Amendment) Act, 2021, Advocate Isa Hakim, one of the petitioners’ lawyers, argued: “Amendments (in the Act), read with the discourse around Love Jihad, it is clear that the impugned Act is enacted with nothing but a communal objective and is thereby opposed to the constitutional morality, basic features and fundamental rights guaranteed under Articles 14, 19, 21, 25, and 26 of the Constitution.”

The Gujarat High Court, through an order on August 19, 2021, put a stay on the operation of several sections of the Act, including a provision that termed interfaith marriages as a means for forceful conversion. The order, the court stated, was being passed “to protect the parties solemnising inter-faith marriage from being unnecessarily harassed”. The state government soon after decided to challenge this order in the Supreme Court of India.

Addressing a rally last year in Uttar Pradesh, the chief minister Yogi Adityanath openly proclaimed: “Govt will work to curb ‘Love-Jihad’, we’ll make a law. I warn all those who conceal their identities and play with the respect of our sisters if you do not mend your ways, your ‘Ram naam satya’ journey (a phase associated with people being taken to be cremated) will begin”. Therefore, it is not surprising that in a state whose chief minister makes such open threats, right-wing groups have used love Jihad to stoke communal tensions and rioting. A total of five states in India, where the BJP is in power, have laws based on the conspiracy theory of Love Jihad, without actually using the phrase.

“It is also to undermine the agency of 21st-century Hindu women. We are a society that is afraid of its own daughters, and to keep a check on them prohibiting them from making their own choices, they (current regime) have brought out very Islamophobic and communal legislation under the garb of a safety and security issue for ‘their’ women,” says Sheeba Aslam Fehmi, research scholar and journalist in an exclusive interview with IPS.

Fehmi, also the president of Dhanak, works to protect the couples’ right to choose marriage or relationship partners. The organisation supports couples in inter-faith and inter-caste marriages. She told IPS they also try to assist interfaith couples with safe houses to ensure they do not become targets of right-wing attacks. Popular Indian jewellery brand Tanishq withdrew this advert with a depiction of an inter-faith marriage. It said while the campaign was to celebrate diversity it had prompted reactions “contrary to its objective”.

It is perturbing that couples who want to marry under the ‘Special Marriage Act’ (an Act passed by the Indian Parliament allowing interfaith marriages without conversion) have a section, which is now being challenged, where a 30-day notice is publicly displayed, inviting objections, before the marriage is registered.

Shital (name changed), shared with IPS how she received threatening calls from some right-wing groups once she and her Muslim partner decided to register under the Act.

“My Aadhar card (national ID) details were made public on a Facebook group. My parents, who approved of our alliance, received calls where they were threatened with ‘dire consequences’ if they did not stop our marriage,” Shital said. She called the marriage off because of these security concerns.

Asif Iqbal, the co-founder of Dhanak, said in an exclusive interview to IPS that they started the organisation because there was no support system for interfaith couples trying to marry using the Special Marriage Act. The objective was to organise people against religious fanaticism.

“I was made to sit for six hours in a police station in Delhi. The investigating officer was trying to enquire about a possible conspiracy as I was the last person an interfaith couple spoke to before they eloped. The boy was Muslim, and the girl Hindu,” said Iqbal.

The fear of vigilante groups, in the online and in actual physical spaces, is so prevalent that even brands advertising using the idea of inter-faith marriages, particularly where the boy is Muslim, are targeted as promoters of Love Jihad. A recent example was a popular jewellery brand depicting a Hindu woman and a Muslim man getting married. The advert was trolled on social media, that the company removed the advertisement from all forums.

For couples looking to challenge the draconian laws, the only recourse is the courts. However, the worrying feature is that Love Jihad targets Muslims and criminalises its men in a society with frequent incidences of Islamophobia.