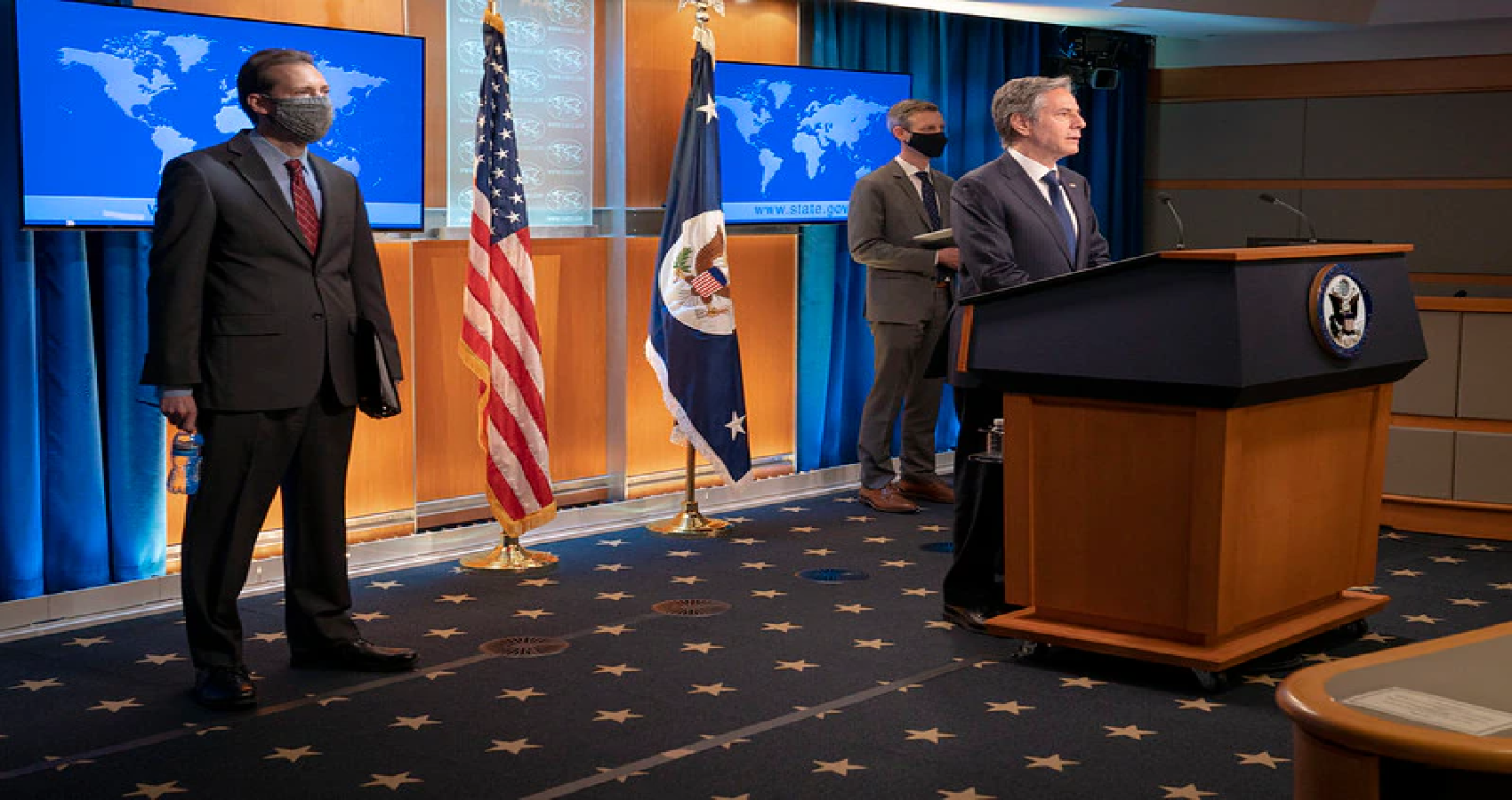 International Religious Freedom senior official Dan Nadel, speaking at a news conference to announce the annual International Religious Freedom Report at the State Department in Washington, DC, on May 12, 2021, said: “When laws are passed, when initiatives are undertaken that are done without effective consultation with these communities, it creates a sense of disempowerment…the best way to address that is to engage in that direct dialogue between government and civil society, including religious communities.” (Andrew Harnik/POOL/AFP via Getty Images)

A senior State Department official dealing with religious freedom said the U.S. is regularly engaging with Indian officials on protecting the rights of minorities and the government has opportunities to address the concerns of civil society groups.Briefing reporters about the 2020 Report on International Religious Freedom May 12, Daniel Nadel said: “With respect to India, I think there’s genuine opportunities there for the government to address some of the concerns they hear from Indian civil society through greater dialogue and engagement.

“We do regularly engage with Indian government officials at all levels, encouraging them to uphold human rights obligations and commitments, including the protection of minorities, in keeping with India’s long tradition of democratic values and its history of tolerance.”The report said that among the issues discussed with officials were “the Muslim community’s concerns about the CAA (Citizenship Amendment Act), difficulties faced by faith-based (religious) NGOs in the wake of amendments to the FCRA (Foreign Contributions Regulation Act), and allegations that Muslims spread Covid-19.”

Nadel, the senior official in the State Department’s Office of International Religious Freedom, said that the U.S. encourages the Indian government to consult “religious communities, these outside actors” on passing laws to avoid alienating them.”When laws are passed, when initiatives are undertaken that are done without effective consultation with these communities, it creates a sense of disempowerment; at times, of alienation. And the best way to address that is to engage in that direct dialogue between government and civil society, including religious communities.”

The annual report, which is mandated by Congress, did not grade India nor deliver an overall verdict on the state of religious freedom in the country.It listed incidents involving attacks on minorities taken from reports by the media and religious and civil society groups, and legislative actions.

Releasing the report, Secretary of State Antony Blinken said: “Our promise to the world is that the Biden-Harris administration will protect and defend religious freedom around the world. We will maintain America’s longstanding leadership on this issue.”He acknowledged that “anti-Muslim hatred is still widespread in many countries, and this, too, is a serious problem for the U.S.”

Among the incidents it lists were the protests in February 2020 against the CAA, which it said “became violent in New Delhi after counter-protesters attacked demonstrators. According to reports, religiously motivated attacks resulted in the deaths of 53 persons, most of whom were Muslim, and two security officials.”Another incident it mentions is the Islamic TablighiJamaat organization’s conference last year in New Delhi, which the report said the government and media initially blamed for some of the spread of the novel coronavirus.

But the report also said that “in an online address to the nation on April 26, Mohan Bhagwat, the leader of the RSS, called on Indians not to discriminate against anyone in the fight against Covid-19. In a reference to the March TablighiJamaat conference, he asked people not to target members of a ‘particular community’ (i.e., Muslims) ‘just because of the actions of a few’.”Some of the incidents listed in the report relate to actions taken against Muslim and Christian groups over alleged violation of Covid regulations in holding religious services.

However, the report also listed the deaths of two Christians, P. Jayaraj and his son Bennicks, in police custody after they were arrested for allegedly keeping their shop open in violation of a curfew as if those were religious violence.The report mentions two cases of Hindu women being killed for refusing to convert to Islam and of Christian women “forcibly” converted.It noted Amnesty International India ending operations in the country “after the government froze its bank accounts in response to a FCRA investigation that the NGO says was motivated by its critical reporting against the government.”