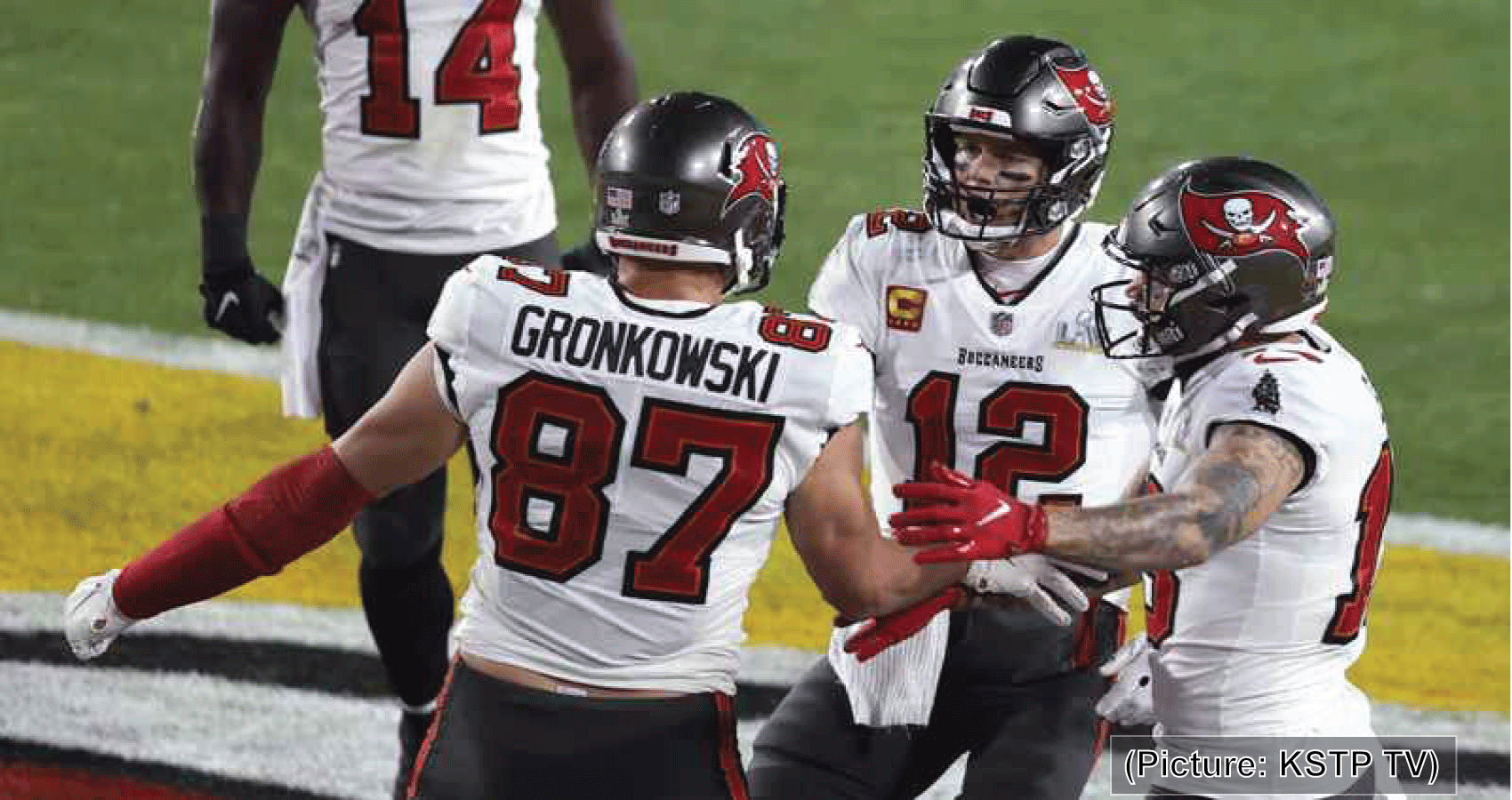 Tom Brady has done it yet again. The quarterback won his record seventh Super Bowl and the first with his new team, the Tampa Bay Buccaneers. Brady and the Bucs beat the defending champion Kansas City Chiefs 31-9 in what was a home game for the Bucs, played in Tampa, Fla on Sunday, Feb 7th.

Super Bowl 55 capped a difficult and challenging year for the NFL. The coronavirus led to postponements, teams sometimes playing with depleted rosters and many games hosted in mostly empty stadiums.

Brady, the oldest ever to play in a Super Bowl at age 43, showed his experience in the first half, leading the Buccaneers to three touchdowns — including two passes to his favorite postseason target Rob Gronkowski (and setting another record in the process: it was the 13th and 14th touchdowns for a QB-pass catcher tandem in the playoffs). Brady ended the first half with a 71-yard drive in the waning seconds to go up 21-6 at the break.

Tampa Bay’s defense stymied Kansas City and quarterback Patrick Mahomes in the first half. Mahomes, who had been slowed by a toe injury two weeks ago, seemed to shake off the pain but didn’t show his usual brilliance. The Chiefs made mistakes on both sides of the ball and were penalized eight times for 95 yards. In the last two postseasons, Kansas City faced deficits of at least 9 points and won each of them. The Chiefs were looking to become the first team since the Patriots in the 2003 and 2004 seasons to win back-to-back NFL championships.

KC QB Patrick Mahomes struggled for most of the game. Tampa Bay’s defense swarmed him leading to sacks, hurries and knockdowns during Super Bowl 55.

Kansas City started the second half with its biggest yardage gain of the game when running back Clyde Edwards-Helaire dashed 26 yards. But the K.C. offense could only capitalize with a field goal. The Buccaneers answered on the next drive with yet another touchdown as Leonard Fournette scampered 27-yards for the Bucs first rushing touchdown to extend their lead to 28-9. After a Patrick Mahomes interception, Tampa Bay marched down the field to score yet again, a 52-yard field goal by Ryan Succop, to extend the lead to 31-9. That would be all the scoring of Super Bowl LV and in one of the bigger surprises, the Chiefs did not score a touchdown.

The coronavirus left its mark too. Stadium capacity was reduced to just 25,000 fans in attendance (including 7,500 vaccinated health care workers who received free tickets from the NFL). On television, the stadium looked even fuller because 30,000 cardboard cutouts filled the empty seats with pictures of smiling people who paid $100 for the honor.

Tampa Bay quarterback Tom Brady tossed three touchdowns in the first half of Super Bowl 55. It was Brady’s seventh Super Bowl victory and his first with the Bucs.

It was a record 10th Super Bowl appearance for Brady. He played in nine for the New England Patriots (winning six, a record) in his 20 seasons with New England. This was Brady’s first year with the Bucs and he led his new team to only their second Super Bowl in franchise history. Brady also was named as the Super Bowl MVP — for the fifth time, extending his record.

And good news for Bucs fans: During the post-game celebration Brady said simply, “I’ll be back.” The Buccaneers Super Bowl win is yet another crowning achievement for the Tampa region in the past year. The Lightning won the National Hockey League’s Stanley Cup. The Rays played in the World Series against the Los Angeles Dodgers. And now the Bucs winning the NFL championship in their home stadium caps a stellar run for the region now known as Champa Bay.