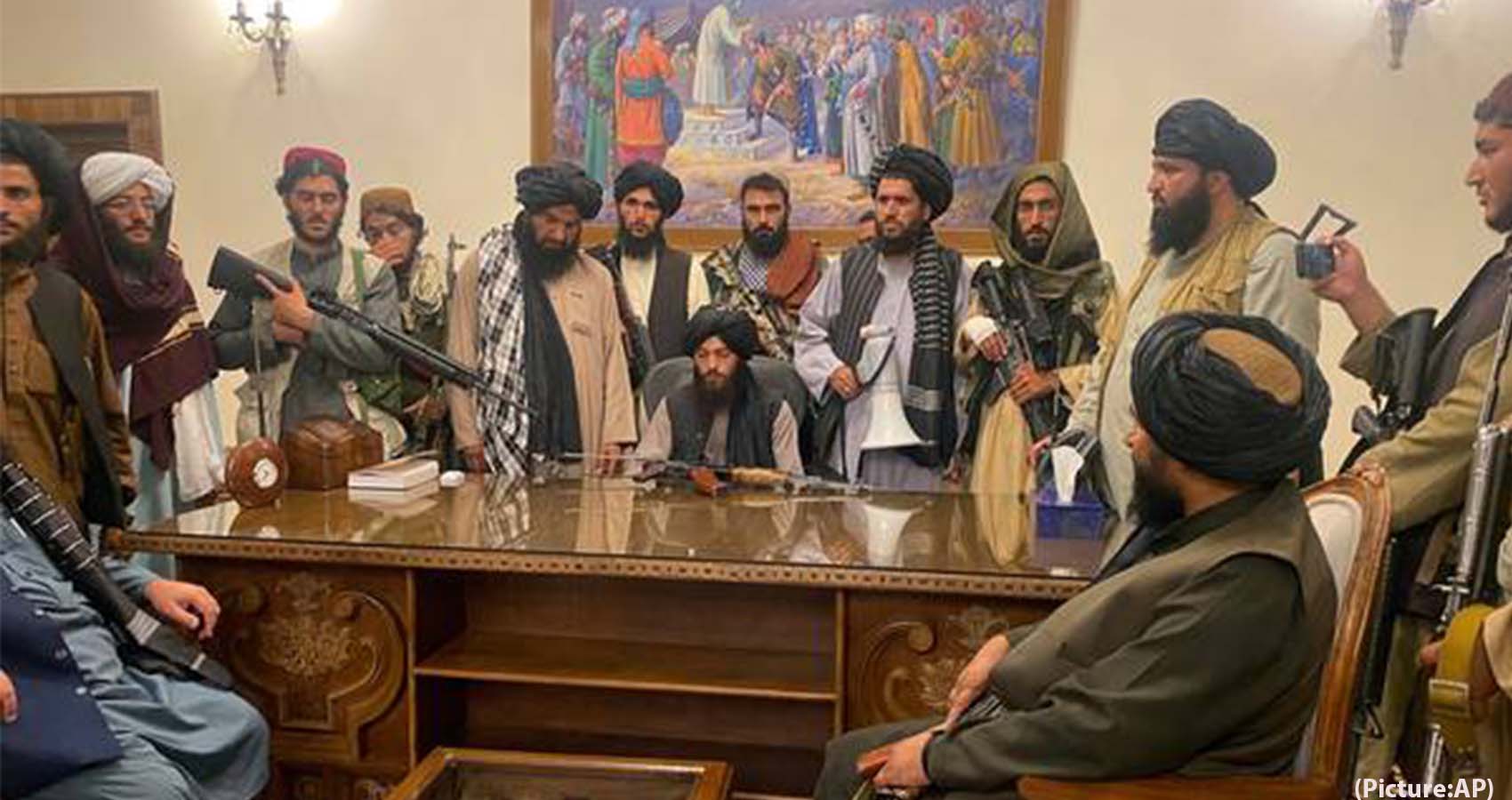 The final collapse of the 20-year western mission to Afghanistan took only a single day as Taliban gunmen entered the capital, Kabul, on Sunday, August 15th while President Ashraf Ghani fled the country, and the US and other coalition countries abandoned their embassies in panic. 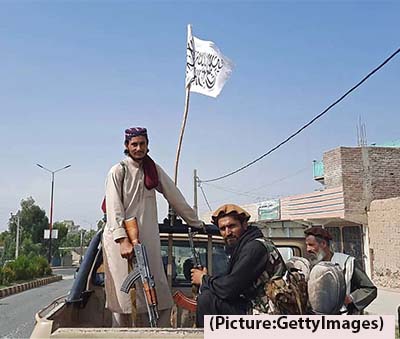 As the Taliban took control of the city and installed themselves in the presidential palace, thousands of Afghans and foreign nationals surged on to the tarmac at Kabul airport seeking a place on a flight out of the country. Meanwhile, Abdul Ghani Baradar, the Taliban leader freed from a Pakistani jail at the request of the US less than three years ago, has emerged as an undisputed victor of the 20-year war.

The Taliban have showed off containers full of weapons and military hardware seized from the Afghan military as American forces withdraw from the country and the militants march across the country. District after district has fallen to the Taliban. The militants have seized 120 districts since May 1, according to an ongoing assessment by the Long War Journal. The map is a moving patchwork, but at last count the Taliban controlled 193 districts and contested 130, while 75 were under the control of the government or are undetermined, according to the publication, which reports on the global war on terror and is a project of the Foundation for Defense of Democracies, a hawkish Washington think tank.

Questions will be asked as to how the whole country has in effect been overrun in a matter of weeks when the Taliban have 80,000 troops in comparison with a nominal 300,699 serving the Afghan government. It is a tale of two armies, Patrick Wintour writes, one poorly equipped but highly motivated ideologically, and the other nominally well equipped, but dependent on NATO support, poorly led and riddled with corruption.

Thousands of Afghans rushed into Kabul’s main airport Monday, some so desperate to escape the Taliban that they held onto a military jet as it took off and plunged to their deaths. At least seven people died in the chaos, U.S. officials said, as America’s longest war ended with its enemy the victor.

The crowds came while the Taliban enforced their rule over the capital of 5 million people after a lightning advance across the country that took just over a week to dethrone the country’s Western-backed government. There were no major reports of abuses or fighting, but many residents stayed home and remained fearful after the insurgents’ takeover saw prisons emptied and armories looted.

Congressional outcry over the Biden’s administration’s handling of the U.S. withdrawal from Afghanistan and the Taliban’s takeover of the country has been swift.  Criticism of the administration was bipartisan: Republicans were scathing about the White House’s actions, and Democrats, while acknowledging that President Biden was carrying out the policies of his predecessor, criticized the haphazard manner of the U.S. withdrawal.

A resolute U.S. President Joe Biden said he stood “squarely behind” his decision to withdraw American forces and acknowledged the “gut-wrenching” images unfolding in Kabul. Biden said he faced a choice between honoring a previously negotiated withdrawal agreement or sending thousands more troops back to begin a third decade of war.

“After 20 years, I’ve learned the hard way that there was never a good time to withdraw U.S. forces,” Biden said in a televised address from the White House. The president said American troops should not be fighting and dying in a war “that Afghan forces are not willing to fight for themselves.” He warned the Taliban not to interfere with the evacuation efforts.

Across Afghanistan, the International Committee of the Red Cross said thousands had been wounded in the fighting. Security forces and politicians handed over their provinces and bases without a fight, likely believing the two-decade Western experiment to remake Afghanistan would not survival the resurgent Taliban. The last American troops had planned to withdraw at the end of the month.

“The world is following events in Afghanistan with a heavy heart and deep disquiet about what lies ahead,” United Nations Secretary-General Antonio Guterres said.

A defiant President Joe Biden rejected blame for chaotic scenes of Afghans clinging to U.S. military planes in Kabul in a desperate bid to flee their home country after the Taliban’s easy victory over an Afghan military that America and NATO allies had spent two decades trying to build.

At the White House, Biden called the anguish of trapped Afghan civilians “gut-wrenching” and conceded the Taliban had achieved a much faster takeover of the country than his administration had expected. The U.S. rushed in troops to protect its own evacuating diplomats and others at the Kabul airport.

But the president expressed no second thoughts about his decision to stick by the U.S. commitment, formulated during the Trump administration, to end America’s longest war, no matter what.

Afghan President Ashraf Ghani slipped out of his country Sunday in the same way he had led it in recent years — a lonely and isolated figure. Ghani quietly left the sprawling presidential palace with a small coterie of confidants — and didn’t even tell other political leaders who had been negotiating a peaceful transition of power with the Taliban that he was heading for the exit.

Abdullah Abdullah, his long-time rival who had twice buried his animosity to partner with Ghani in government, said that “God will hold him accountable” for abandoning the capital.

Ghani’s destination was not immediately known. In a social media post from an unknown location, he wrote that he left to save lives. “If I had stayed, countless of my countrymen would be martyred and Kabul would face destruction and turn into ruins that could result to a human catastrophe for its six million residents” Ghani wrote.

A bipartisan group of senators, led by Democratic Sens. Bob Menendez of New Jersey, who chairs the Senate Foreign Relations Committee, Edward Markey of Massachusetts and Jeanne Shaheen of New Hampshire, have called on the Biden administration to take swift action to protect endangered Afghan women.

“We strongly urge you to create a humanitarian parole category specifically for women leaders, activists, human rights defenders, judges, parliamentarians, journalists, and members of the Female Tactical Platoon of the Afghan Special Security Forces and to streamline the paperwork process to facilitate referrals to allow for fast, humane, and efficient relocation to the United States,” the 47 senators said in a letter sent to Secretary of State Antony Blinken and Secretary of Homeland Security Alejandro Mayorkas.

Sen. Shaheen, a member of the Senate Armed Services and Foreign Relations committees, said in a statement the images of Afghan civilians at the airport pleading to be evacuated are “seared into our minds. Dire conditions on the ground persist today and without swift, decisive action from the administration, Afghan civilians will suffer or die at the hands of the Taliban,” she continued.

She called for an immediate expansion of the refugee program for Afghan women seeking asylum. “A failure to act now will seal their fate, and the generation of girls who grew up with freedoms, education and dreams of building their country’s future will die with them.”