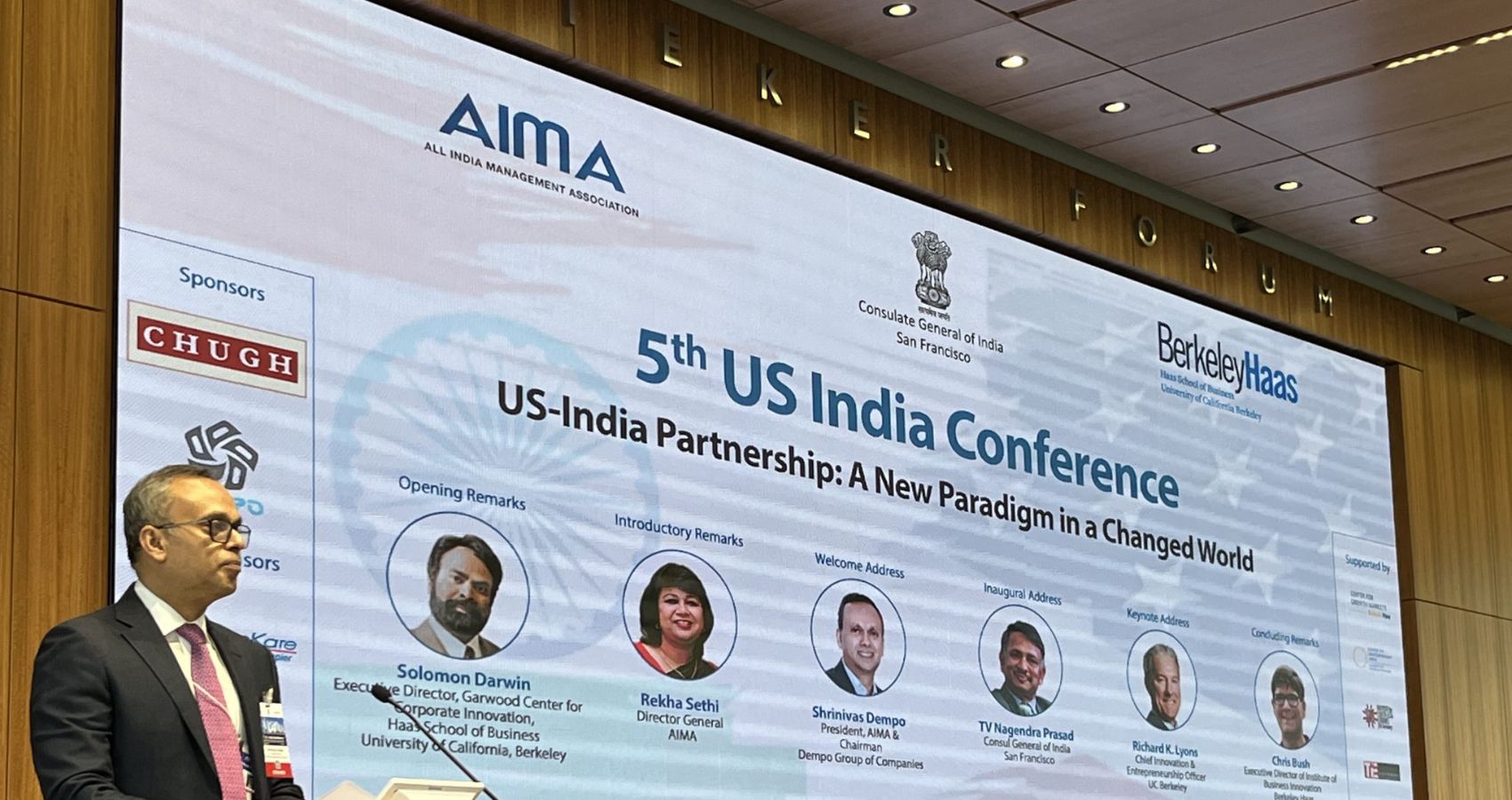 Shrinivas Dempo is not one to mince words. The president of the All India Management Association (AIMA) – the country’s apex non-profit, non-lobbying body for management professionals with over 38,000 members – is not optimistic about the current geopolitical and economic situation, even as he is hopeful about the future.


“These are extremely difficult times,” he told indica in an exclusive interview on the sidelines of the 5th US-India Conference jointly hosted by AIMA and Haas School of Business at UC Berkeley, on October 11. “We are facing all sorts of crises – climate, energy, interest rates, foreign exchange. But when there are challenges there are also opportunities.”

The 1969-born Dempo, who hails from the state of Goa in western India, is the chairman of the Dempo Group of Companies – a diversified conglomerate with interests in industries such as calcined petroleum coke, shipbuilding, food processing, real estate and newspaper publishing. The company also owns a popular football club.

The theme for this year’s conference was ‘US-India Partnership: A New Paradigm in a Changed World’. In his speech, Dempo acknowledged the issues faced by the world and not just India. “We believe in the strength of people,” he said, “and together we (the US and India) can achieve.”

He told indica, “With so much uncertainty, thought leaders will have to come up more ideas for our economies to collaborate. India is one of the world’s most promising nations. Our demographic dividend, our younger population is our greatest strength.”

He added that the Russia-Ukraine conflict and the China-Taiwan geopolitical tensions give an opportunity for India and the US to collaborate on a higher scale. “India in the east and US in the west will play a major role in sorting out the issues.”

He said collaboration is better than competition, and for that to happen, he proposed a summit where industry and academia from the two countries can come together.

Dempo said the AIMA is not like other business associations, “nor are we an advocacy organization,” but added that AIMA talks about adapting better management practices. “AIMA not only addresses corporate leaders but we also manage students that are our future corporate leaders. The idea of hosting the summit is to collaborate with education institutes and work on a common theme.”

The delegation has people from manufacturing, transportation and logistics sectors. “The dialog can evolve into specific business opportunities,” Dempo said. “When things are bad, it is the best time to get things at a good price.”

He said India’s current growth rate (7% annually) can sustain for at least 30 more years and “while we cannot compare with the US, we will probably make India the best destination for investment.”

He opined that the Indian government needs to pay greater attention to the tourism sector. “Tourism potential remains largely untapped, even though we have made great progress. The past need not be an indicator, but we need to focus on heritage tourism, nature tourism, ecological tourism, and much more. Infrastructure needs to be set up on a much larger scale… more hotels, better facilities.”

He said in his speech that India’s industrialization and digitization has improved leaps and bounds, but “we still have a long way to go. “Indian youth today have an unprecedented opportunity to be entrepreneurs. I know the US has traditionally done well in this area and so we need greater collaboration in this field. Prime Minister Modi is bullish on Make in India and Start-up India.”

Dempo has a personal connection with America. He is a graduate of the Tepper School of Business at Carnegie Mellon University and serves as a trustee at the university.

In 2011, he made a $3 million gift to endow a professorship at Tepper called the Vasantrao Dempo Reflective Chair, to support teaching and research on India-relevant issues. There are two simultaneous reflective chair professors – one in the US and the other in India. Prof Sudhir Kekre was appointed the first such professor in 2017.

HM Nerurkar, chairman of TRL Krosaki Refractories Limited has one-line advice for new-age entrepreneurs – Silicon Valley is where you get cutting-edge tech and this is where you can learn the most.

Nerurkar was a keynote speaker at the 5th US-India Conference jointly organized by the All India Management Association and the Haas School of Business at the University of California, Berkeley, on October 11. In an exclusive interview with indica, Nerurkar said that despite several agencies lowering India’s GDP growth forecast for 2023, “It is quite pessimistic and I believe it will be around 7 percent.”

He said this is possible because India is still not an export-led economy, and India cannot suffer thanks to its domestic consumption. “I think we will still manage to retain the 7 percent GDP growth target.”

Nerurkar, who has spent more than half his professional career with the Tata group, still serves on its board. He is also an advisor to several multi-billion-dollar conglomerates such as the Adani group.

The soft-spoken Nerurkar earned a bachelor’s degree in metallurgical engineering from the College of Engineering, Pune (CoEP). He joined Tata Steel in 1972 and rose to becoming its managing director in charge of India and South East Asia operations.

He commented on the Deloitte report that stated that India is a more challenging business destination compared to countries such as China and Vietnam. “There is some truth (in the report). Our rank is still not where it should be on ease of doing business. There are issues and the government is trying to address them.”

He is an optimist, though. “I think India will not allow any opportunity to slip away at this juncture. For example, Adani group is trying to be number one. That kind of ambition and that kind of leadership was not something you have dreamt of 10 years back.” He said this is the right time for India to grab US investors, given the tension between China and the US.

In his short speech at the conference, Nerurkar spoke about his ideas on the metaverse. “All of us in business and in government have to ensure that the younger generation gets training or the skill development that is appropriate for the jobs that are coming up.” (IndicaNews)