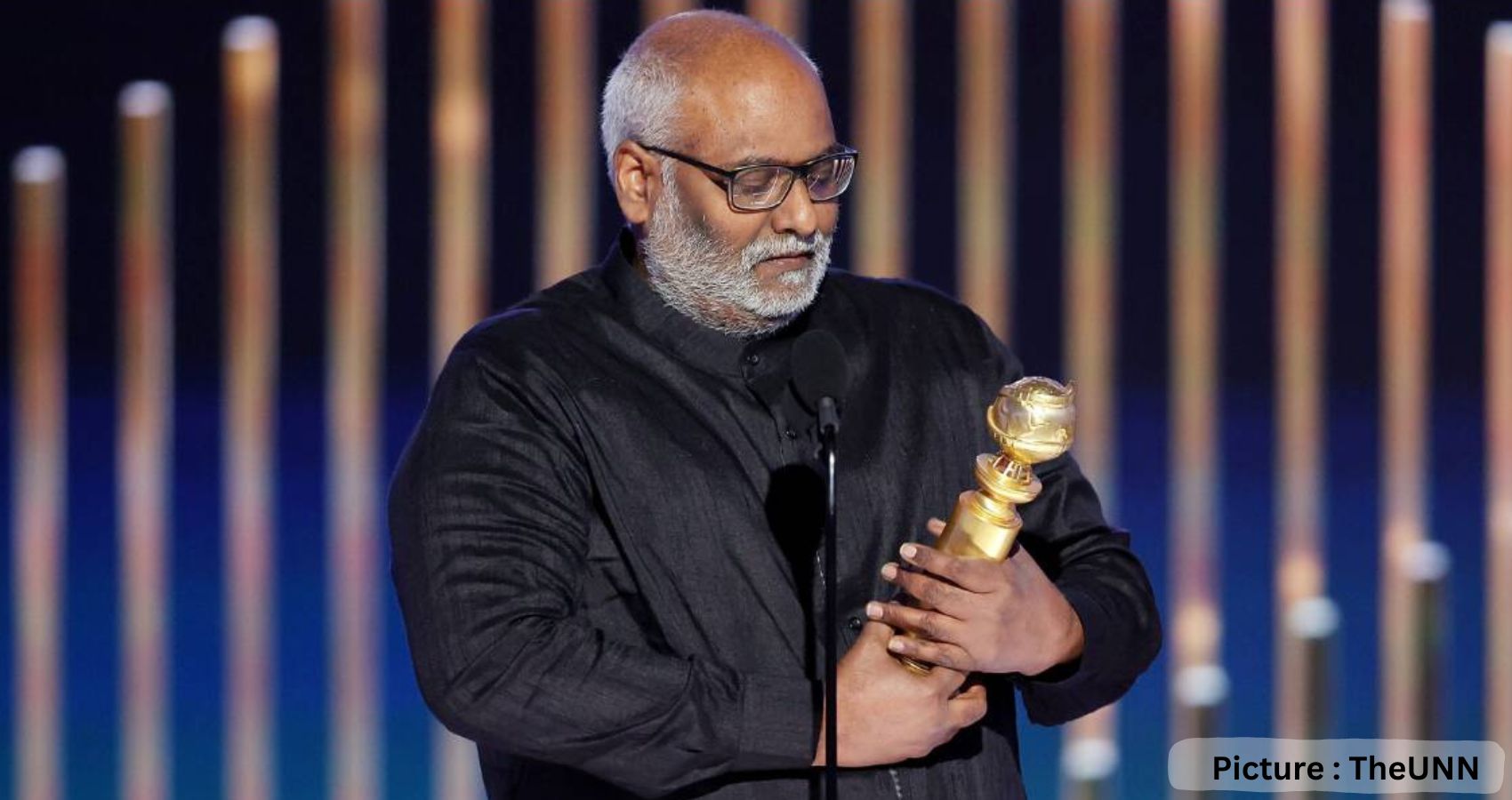 People of Indian origin across the globe are celebrating after Telugu movie RRR created history by winning a Golden Globe – a first for the country. Written and directed by SS Rajamouli, RRR, which stands for Rise, Roar, Revolt, is a historical fantasy that tells the rollicking story of two revolutionaries who fight against British rule in India – superstars Ram Charan and Jr NTR play the lead roles.

SS Rajamouli’s hit historical epic RRR was nominated in two categories at the 80th Golden Globes, considered an important precursor to the Oscars.  Composer MM Keeravani, along with singers Kaala Bhairava and Rahul Sipligunj, has won the Golden Globe for Best Original Song, for the track “Naatu Naatu,” which became an anthem of sorts for fans of director SS Rajamouli’s RRR. The historical epic has also been nominated in the Best Non-English Language Film category at the 80th Golden Globes.

Naatu Naatu, a four-and-a-half-minute stomper of a song, features Charan and Jr NTR, and has had thousands grooving to its beat. Their energetic moves have inspired viral trends on social media in India and globally.

Back home, several Indians including Prime Minister Narendra Modi expressed their joy at the news. India’s Prime Minister Modi congratulated the team, saying the “prestigious honour has made every Indian very proud””.

Oscar-winning music composer AR Rahman called the win a “paradigm shift”. Bollywood superstar Shah Rukh Khan wrote on Twitter that he “woke up and started dancing to Naatu Naatu” to celebrate the news.

One of India’s most expensive films, the dazzling action epic has been a huge box-office success – not just domestically but also in countries such as the US. Hollywood actress Jessica Chastain tweeted last week that watching the film felt like “such a party”.

A Hindi-language version of the film on Netflix was among the platform’s Top 10 most watched titles in the US for weeks when it released in May 2022. In December, BBC Culture film critics Nicholas Barber and Caryn James chose it as one of the 20 best films of the year, calling it a “crazily over-the-top action movie” with a powerful story.

Fans worldwide have gushed over the infectious dance steps that accompany the song’s chorus, where the actors shimmy and glide in a synchronised cowboy routine. The team behind the song spoke to BBC Telugu in January about the effort they put in.

Choreographer Prem Rakshit said that he composed nearly 95 dance steps for the song – with 30 different versions of the signature step in the chorus alone. It took about 19 months from the first discussion until the final, polished result emerged – a fun mish-mash of dance genres ranging from an old barn stomp to a bit of Gangnam Style gallop and traditional Bollywood moves.

The song was shot in front of the Mariinskyi Palace in Ukraine – a gorgeous sea-blue structure of baroque architecture – months before the war began. The film’s director Rajamouli said in an interview that “luckily, they gave us permission to shoot because the Ukrainian president [Mr Zelensky] was a television actor”.

The idea was to create a song which took “enjoyment and joy” to a new level, the song’s composer Keeravani told BBC Telugu.  “Rajamouli told me that he wanted a song in which both the actors compete with each other and dance.”

Keeravani then asked lyricist Chandrabose to pen the words. “I told him that you can write whatever you want but the song should create excitement and enthusiasm about the dance moves of the lead actors,” Keeravani said.

On Wednesday, fans could barely contain their happiness on Twitter as they celebrated the award.  “This is history in making for Indian cinema at global platform,” a user wrote. Telugu superstar Chiranjeevi Konidela, who is also Charan’s father, called it a “phenomenal, historic win” – a sentiment echoed by several others in the film industry and beyond.

RRR was also nominated in the Best Non-English Language Film category at the Golden Globes, but lost to Argentina, 1985. Considered an important precursor for the Oscars, the Globes are emerging from a major controversy that resulted in the industry largely blacklisting them for over a year. After fundamental changes were introduced behind-the-scenes, mostly in relation with diversity and transparency, the event is making a comeback to TV after an under-the-radar 2022 edition.

“Naatu Naatu,” a dance number featuring stars Jr NTR and Ram Charan, was competing against Taylor Swift’s “Carolina” from Where the Crawdads Sing, “Ciao Papa” from Guillermo del Toro’s Pinocchio, Lady Gaga’s “Hold My Hand” from Top Gun: Maverick, and “Lift Me Up” from Black Panther: Wakanda Forever, performed by Rihanna. A dance-off number in which the central characters, played by NTR Jr and Ram Charan, challenge British oppressors, “Naatu Naatu” became known for its elaborate choreography and musical storytelling.

India previously made its presence felt in the Best Original Score category over a decade ago, when AR Rahman won for Danny Boyle’s Slumdog Millionaire. Rahman was also nominated in the same category for Boyle’s follow-up, 127 Hours. V Shantaram’s Do Aankhen Barah Haath made history when it won the equivalent of the Best Non-English Language Film in 1957. Richard Attenborough’s Gandhi was won the Globe in the same category, even though it wasn’t a foreign production.

RRR became a cult phenomenon in the US after its Hindi language version debuted on Netflix earlier this year. After developing a devoted fanbase, it was re-released in theatres, culminating in a legendary sold-out screening at the iconic Chinese Theatre in Hollywood. The movie subsequently became an awards contender, picking up five nominations at the Critics Choice Awards in addition to its two nods at the Globes. It has been shortlisted in two categories at the Oscars, and in one category at the BAFTAs. Rajamouli recently won the prestigious New York Film Critics Circle award for Best Director, while RRR found spots on many American critics’ top 10 lists.

As India bagging a Golden Globe for the number ‘Naatu Naatu’ has made headlines, the Indian attire sported by the ‘RRR’ family too grabbed eyeballs at the event.

‘RRR’ brought home the Golden Globe for Best Original Song in Motion Picture for the song ‘Naatu Naatu’, however, the film lost out the bigger share of the pie — that of the Best Motion Picture Non-English award to the Argentine film ‘Argentina, 1985’.

It was Ram Charan, his wife Upasana, M. M. Keeravaani, his wife Srivalli S. S. Rajamouli and his better half Rama Rajamouli, who unlike any other global star chose to flaunt the Indian wear at the ceremony.

Ram Charan looked every inch dapper in an all black Kurta paired with straight pants and sunglasses. His wife Upasana dolled up in a printed saree.

Rajamouli chose a black kurta, red dhoti pants and a crisp red dupatta while his wife Rama, a costume designer, opted for a green and orange Kanjeevaram saree.

Keeravaani seemed to join the gang with a black kurta and straight pants. His wife chose a bright yellow and orengish-red nine-yard wonder.

Jr. NTR looked every inch handsome as he opted for a black suit paired with a bow-tie and a white shirt.

‘RRR’ centres around two real-life Indian revolutionaries, Alluri Sitarama Raju and Komaram Bheem, their fictional friendship and their fight against the British Raj.

Set in the 1920s, the plot explores the undocumented period in their lives when both the revolutionaries chose to go into obscurity before they began the fight for their country.