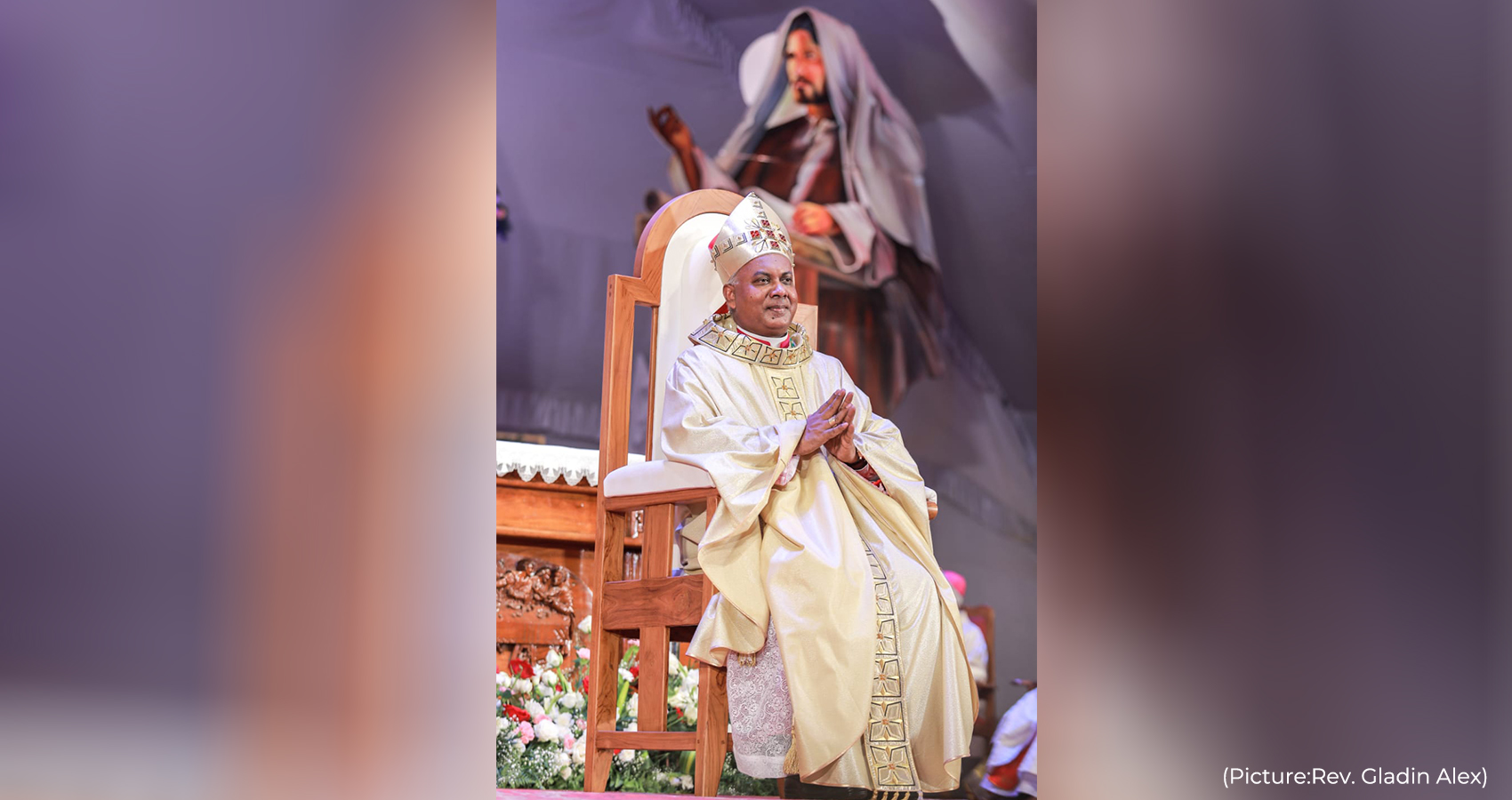 Rev. Fr. Thomas J. Netto, born on December 29th, 1964 was installed as the Archbishop of the Latin Archdiocese of Trivandrum during a solemn episcopal ordination ceremony, attended by tens of thousands of devotees, religious, community, and political leaders at St Sebastian’s Church Grounds, Chreuvettukadu, Thiruvanathapuram, Kerala on Saturday, March 19th, 2022.

Archbishop  Netto, 58, is the second Archbishop of the Latin Archdiocese of Thiruvananthapuram. Addressing the attendees at the conclusion of the ceremony, Archbishop Netto said the responsibility bestowed upon him was challenging but one he accepted with utmost humility. 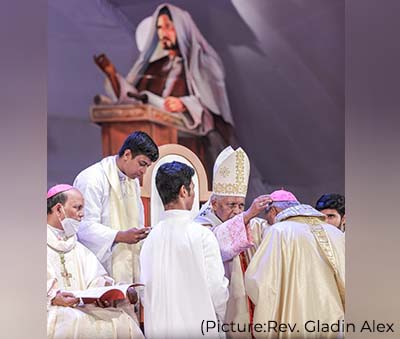 Known among his priest friends and the larger Catholic community in Kerala, the state with the maximum number of Christians in the country, having as many as 20% of the state’s population being Christian, the newly consecrated Archbishop Netto is known for his simplicity, goodness at heart, down to earth approach and cordial relationship with one and all.

Archbishop Thomas J Netto was appointed as the archbishop of Latin Archdiocese of Thiruvananthapuram during the Holy Mass at St Joseph’s Cathedral at Palayam over two months ago. He is known for his oratory and writing skills and had a key role in the publication of diocesan mouthpiece Jeevanum Velichavum.

The nearly four hours long liturgical and felicitation ceremony began with a reception accorded to the Archbishop-designate who was led to the venue in the accompaniment of nearly 20 Metropolitans representing various dioceses and denominations and several clergy members. M. Soosa Pakiam, the Apostolic Administrator of the Thiruvananthapuram Archbishop, was the chief celebrant for the episcopal ordination. He presented the episcopal ring along with the staff and miter to the newly-ordained Archbishop.

Both the Latin and the Malayalam translation of the Papal order appointing Msgr. Netto as the Archbishop of Thiruvananthapuram was read out at the ceremony that was attended by Archbishop Leopoldo Girelli, the Vatican’s Apostolic Envoy to India. In his message, the Vatican ecclesiastical diplomat said he viewed Kerala to be known for its religious places of worship, Carnatic music that combines both Indian and Dravidian culture, the Periyar river that is its ‘lifeline’ and its highest literacy level in the country, among other unique features.

The archbishop was anointed with the oil of sacred chrism, ring placed on his finger, the miter on his head, and given the pastoral staff. Thereafter, the ‘Laying on of Hands’ ceremony was held followed by the Prayer of Ordination. Earlier, the installation commenced with the Archdiocesan Chancellor Monsignor C. Joseph making the customary request to ordain Monsignor Netto. The co-celebrants included Varappuzha Archbishop Joseph Kalathiparambil and Neyyattinkara Bishop Vincent Samuel. 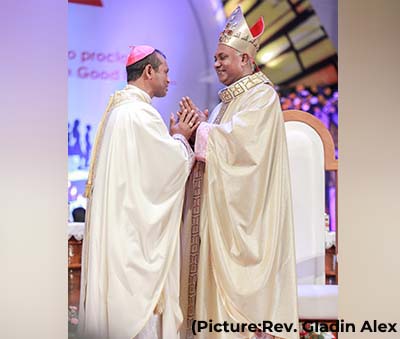 Delivering the benediction, Cardinal Baselios Cleemis Catholicos, Major Archbishop-Catholicos of Malankara Syrian Catholic Church, called upon the new Archbishop to lead the coastal population from the front for their rights and betterment. The benefactors of such efforts must not be the parishioners alone, but the entire community in the region. He also recounted the selfless deeds of the fisher-folks in rescuing those stranded in the floods of 2018.

Elected representatives from the Kerala state, including Transport Minister Antony Raju, Shashi Tharoor, MP, Kadakampally Surendran, M. Vincent, several MLAs, were among those who turned up to witness the ceremony.

The new archbishop was appointed, after the retiring Archbishop Soosapakiam, who turned 75 last March, 2021, had submitted his resignation as per the Canon Law. His Holiness Pope Francis accepted the resignation of Most Rev. Maria Callist Soosa Pakiam (75) on February 2nd, 2022. Archbishop Pakiam, who was born on March 11th, 1946 at Marthandumthurai, Tamilnadu was ordained a priest on December 20th, 1969. At the age of 43, he was appointed Coadjutor Bishop of Trivandrum Diocese and ordained Bishop on February 2nd, 1990. He was succeeded Bishop of Trivandrum on January 31st, 1991 at the age of 44. When the Trivandrum diocese was elevated as the Archdiocese on  June 17, 2004 he became the first Metropolitan Archbishop and was installed as the Archbishop of Trivandrum on August 23rd, 2004.

Rev. Fr. Thomas J. Netto was born to Jessayan Netto and Isabella Netto on December 29, 1964.An alumnus of St. Xavier’s College, Thumba, he attended the St. Vincent’s Minor Seminary at Palayam. After attending St. Vincent’s Minor Seminary in Trivandrum (1980-1983), he studied Philosophy at St. Joseph’s Pontifical Seminary, Carmelgiri, followed by Theology at St. Joseph’s Pontifical Seminary, Mangalapuzha, Alwaye.  Archbishop Netto holds a M. A. Degree in Sociology from the University of Kerala and, in 1999, he obtained a Doctorate in Dogmatic Theology (Ecclesiology) from the Pontificia Università Urbaniana. 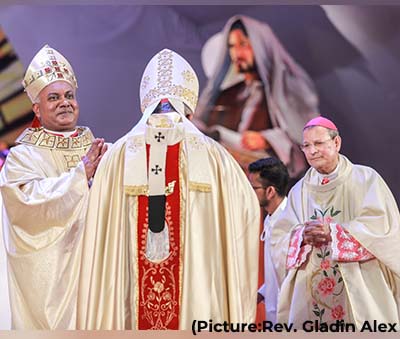 During his long pastoral ministry, serving the Church, Archbishop Netto has held the following offices: He was the parish vicar in Peringamala (1990-1991) and of the Cathedral of Palayam (1991-1995) and executive secretary for ecumenism and interreligious dialogue (1994-1995).  He then served as parish priest in Pettah (1999-2003), and executive secretary for the Basic Christian Communities (2000-2004) and rector of Saint Vincent’s Minor Seminary in Trivandrum (2003-2010).

Since 2007, he has served as a member of the College of Consultors, director of the Board for Clergy and Religious Life (2008-2010), chargé at Saint Anthony’s Forane Church in Valiayathura (2009-2010), parish priest in Thope, coordinator (2010-2014) and episcopal vicar of Ministers (2014-2018).  From 2018 to the present, he served as parish priest of Saint Augustine’s Church, Murukumpuzha, vicar forane of Kazhakkuttom and editor of the diocesan journal Jeevanum Velichavum.

Christianity claims its presence in Kerala since the 1st century itself. Its inception was supposed to be by 52 AD with the arrival of St. Thomas, the Apostle, in this land. However, Christianity in the Latin archdiocese of Trivandrum dates back to the time of the arrival of the Portuguese in India and perhaps earlier. With the arrival of the Portuguese but especially with the advent of the pioneer missionary, St Francis Xavier, Christianity spread far and wide in these parts with the result that by the close of the sixteenth century there were well-established Christian communities along the Trivandrum coast.

The saintly Bishop Benziger who became coadjutor Bishop of Quilon in 1900 and Bishop in 1905 was the apostle who propagated Christianity in the Diocese through the fragrance of his saintly life, wise leadership and unceasing assistance to his missionary priests. In 1931 when he retired to the Carmel Hill Monastery, Trivandrum, there were Christian communities established in almost all places of the interior region .As early as 1919, Bishop Benziger recommended the establishment of the Diocese of Trivandrum, but it materialized only after his retirement. 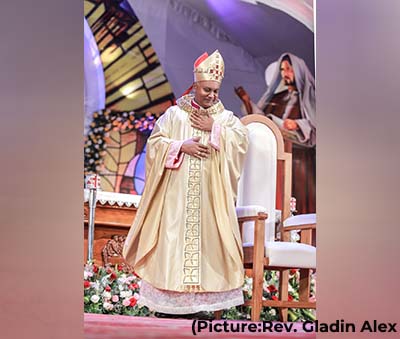 The diocese of Trivandrum was established by His Holiness Pope Pius XI on July 1, 1937 through the Bull “In Ora Malabarica” with the four taluks of Neyyantinkara, Nedumangad, Trivandrum and Chirayinkeezh bifurcated from the diocese of Quilon.

The Diocese is bounded on the north by the Diocese of Quilon, on the east by the Ghats, on the west by the Arabian Sea and on the south by the Dioceses of Kottar and Kuzhithurai. The Archdiocese of Trivandrum is one of the largest dioceses of Kerala, having a Catholic population of over 250,000 Catholics, with a majority of the 90 percent of the faithful belonging to the traditional fishing community, who are among the lowest ranks of the ladder of the social strata in India, but are rich in faith and customs/traditions.

In the year 2004 Pope John Paul II was pleased to elevate Trivandrum diocese as an Archdiocese with Alappuzha, Kollam, Punalur and Neyyatinkara as its suffragent dioceses. Bishop Soosa Pakiam was elevated as the first Archbishop of this ecclesiastical region.