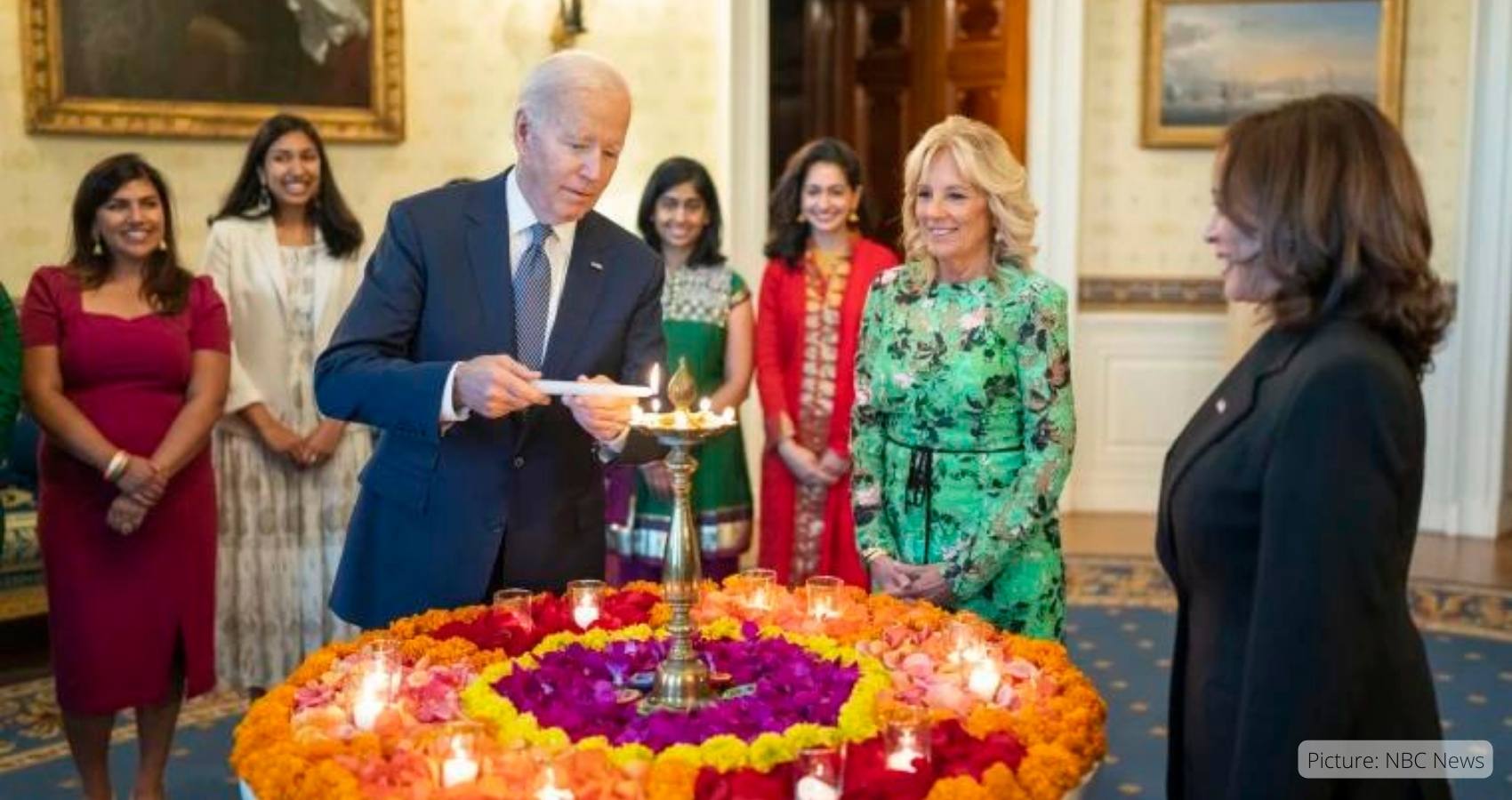 “We are honored to host you. This is the first Diwali reception of this scale in the White House ever to be held. We have more Asian Americans than ever before in history and we want to thank you for making the Diwali celebration a joyous part of American culture,” US President Joe Biden said, after lighting the traditional lamp, marking the largest-ever celebration of Diwali, the South Asian Festival of Lights at the White House in the nation’s capital on Monday, October 24th, 2022.

As described by President Biden as the largest ever Diwali Celebration, since the “People’s House” started celebrating the festival during the George Bush administration, the annual event was hosted by US President Joe Biden and First Lady Dr Jill Biden.

President Biden wished a happy Diwali to over a billion Hindus, Jains, Sikhs, and Buddhists celebrating the festival across the world. He thanked the Asian American community in the US for making the Diwali celebration a joyous part of American culture.

“As we host the official White House Diwali reception, we are honored to light the diya surrounded by members of the most diverse administration in American history, led by Vice President Kamala Harris, the first Black American and South Asian American to become vice president.”

More than 200 eminent Indian Americans attended the reception at the East Room, a venue, which has witnessed some of the landmark events related to the India-US relationship, including the signing of the nuclear deal and the joint press conference by then US President Barack Obama and Indian Prime Minister Manmohan Singh in November 2008. “The incredible South Asian community all across America has helped the country emerge stronger from this pandemic, building an economy that works for everyone, teaching children and caring for elders, responding to the cry for action on climate, working to fix immigration system, defending rights and freedoms, building a more just and equitable country, serving and protecting our communities and the nation, informing, entertaining and inspiring,” Biden said.

Kamala Harris, the Vice President, in her remarks from the White House on the occasion of Diwali celebrations, said, “White House is the people’s house and together our president and first lady have made this place where every American can celebrate their honor and tradition.” Tonight, Vice President Harris said, the Biden administration joins over 1 billion people around the world to light the ‘Diya’ and celebrate the fight for good over evil, knowledge over ignorance and light over darkness.

First Lady Jill Biden praised the Asian American community in the US for “helping us light our way forward. With persistence, with faith, with love, I am grateful that today these diyas have guided you to this home. A home that belongs to all of you,” the first lady said.

President Biden thanked for the optimism, courage, and empathy demonstrated by the incredible South Asian community all across America. “Together, South Asian Americans reflect the soul of who we are as a nation, whether helping us emerge stronger from this pandemic, building an economy that works for everyone, or serving and protecting our communities and our country.”

As the world celebrates this gathering of light, he said, “as this community has experienced too often–that there is always darkness lurking. American history has been a constant struggle between the American ideal that we are all created equal and the harsh reality that we have never fully lived up to it. By marking the victory of light over darkness, Diwali is a reminder that each of us has the power to bring light to the world, whether here in America or around the world.”

The White House reception saw some enthralling cultural events, including performances by sitarist Rishab Sharma and dance troupe, The Sa Dance Company. The guests, dressed in traditional Indian attires such as saree, lehenga and sherwani, relished some mouthwatering Indian delicacies. “The room is full at the East state dining room… This is a real celebration of what the Indian American community has achieved in the United States. It’s a wonderful recognition by the President and by the White House to host all of us on Diwali. I feel very privileged to be here as an Indian American,” Atul Keshap, president of US India Business Council said during the reception.

“It’s an honor and a privilege to be here to celebrate Diwali. Indian Americans thank the President and the First Lady for this,” said H R Shah, chairman and CEO of TV Asia, the largest South Asian television channel in the US.

Ajay Jain Bhutoria, a member of the President’s Advisory Commission on Asian Americans, Native Hawaiians and Pacific Islanders, said the event was held to recognize the South Asian community’s contributions in economic development and managing Covid crisis among others.

Lauding the Diwali celebration, Bhutoria said it sent a message “how much President Biden and this administration loves and respects the South Asian community”. Biden has appointed a record number of over 130 Indo-Americans at various high levels of the administrations, he said.

Diwali is an auspicious festival that symbolizes the triumph of good over evil. Spectacular lights, firecrackers, irresistible traditional sweets and exchanging gifts mark the festival. While, the Hindus celebrate this festival to commemorate the homecoming of Lord Rama after 14 year-long years in exile and his victory over Ravana, for the people of Jain faith, this festival carries the essence of spiritual upliftment because it marks the achievement of Nirvana or Moksha by Mahavira, the last Tirthankara.

Diwali is popularly known as the “festival of lights” and is observed incessantly for five days that kicks off in late Ashwin and concludes in the early Kartika month according to the lunisolar Hindu calendar. Each day of the festival is associated with six different principal stories. In North India, worshipping of Lord Ganesha and Lakshmi, the goddess of wealth, is an important part of Diwali that signifies the welcoming of prosperity and wealth.