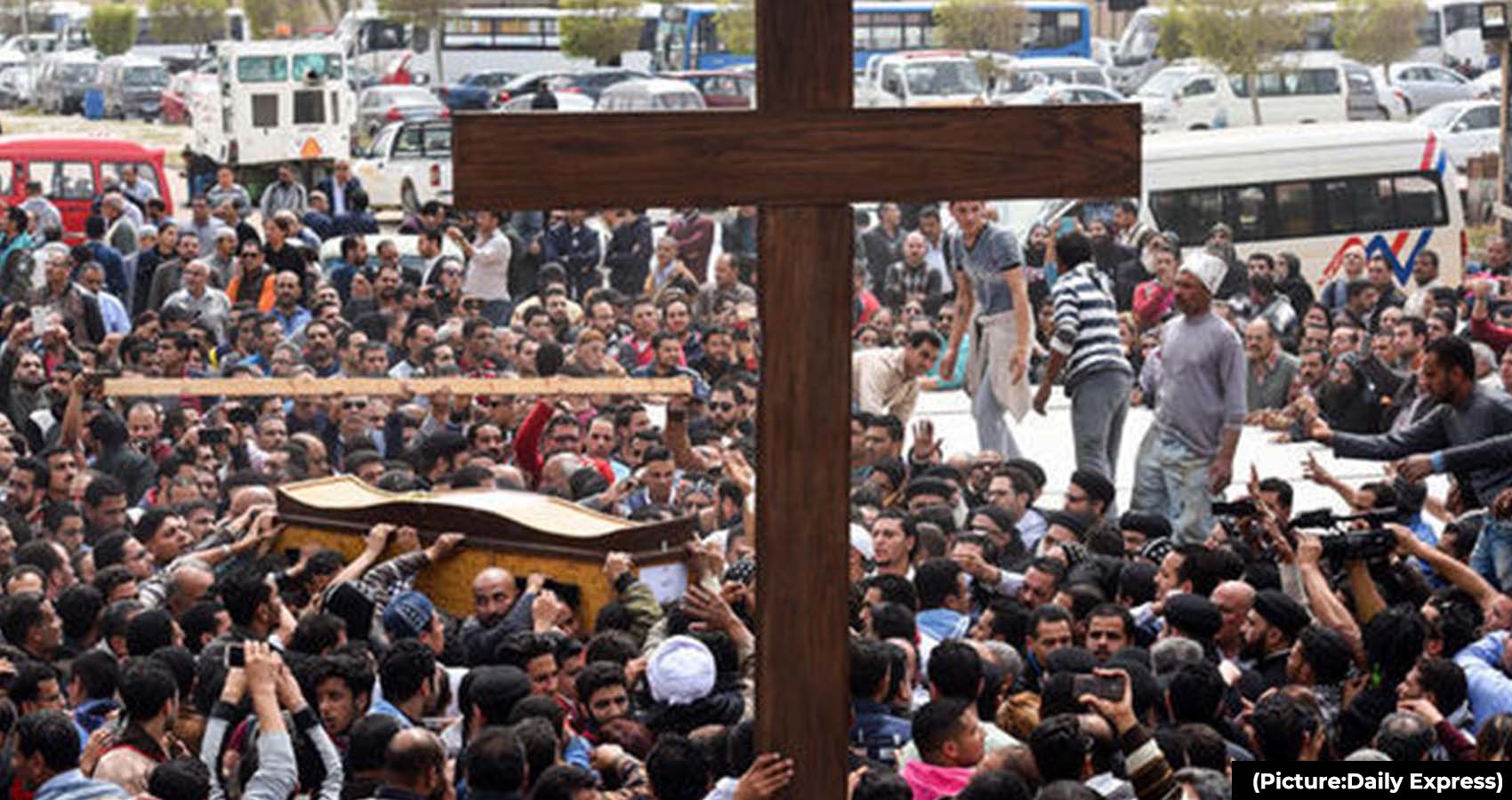 Today, over two thousand years ago Jesus Christ was persecuted or believed to be crucified on this day. Followers of Jesus are even today being persecuted in certain parts of the world including in India wherein vested groups of people are spreading hatred against minorities for their political gains.

The persecution of Christians in India is intensifying which is leading to a systemic and carefully orchestrated violence against Christians, including use of social media to spread disinformation and stir up hatred.

Most church leaders are men, and being a pastor is understood to be one of the riskiest vocations in India. Pastors and their families are targeted to instill fear among them.

There are 42 cases pending in various courts challenging the constitutional validity of the so-called “Freedom of Religion Act against” which have been framed with a malafide intention to harass the Christian community who are falsely accused of forceful conversion. Whereas, till today, not a single Christian has been convicted for forcing any one to convert. Moreover, census after census have shown that Christian population remained 2.3 percent of India’s population of 1.2 billion.

There are many false cases that were filed against Christians which the courts have found untrue and pulled up the police and the authorities for misusing the poser. One example is in May 2017, 72 Christian children going for Christian camp from Madhya Pradesh to Nagpur accompanied by six elders were detained on charges of being “kidnapped to be converted’. The Madhya Pradesh High Court granting bail to children and elders directed the police to come back with evidence to prove their claim that children are not Christians and that they were being kidnapped to be converted. Till today, the police have not come back to Court.

In another judgement, beginning of 2019, the Delhi High Court while restoring the status of Overseas Citizen of India said that the government could not show any proof whatsoever of having forcefully or fraudulently converting even a single person. Under similar charges, there were over 40 Churches in Jaunpur District of Uttar Pradesh that were shut down in 2018. Even though pastors and other Christian leaders are out on bail, the police are yet to file the charge sheets against any of them as they do not have any evidence to prove fraud or forceful conversions. There are hundreds of such cases, if not in thousands, that are lying in front of various courts across India due to the absence of proof of fraud or forceful conversions. 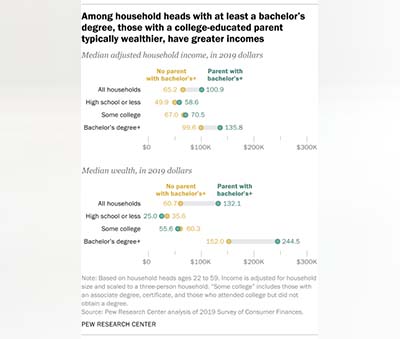 The October 2021 Center survey found that among adults without a bachelor’s degree, Hispanic adults (52%) were more likely than those who are White (39%) or Black (41%) to say a major reason they didn’t graduate from a four-year college is that they couldn’t afford it. Hispanic and Black adults were more likely than their White counterparts to say needing to work to support their family was a major reason.

While a third of White adults said not wanting to go to school was a major reason they didn’t complete a four-year degree, smaller shares of Black (22%) and Hispanic (23%) adults said the same. White adults were also more likely to cite not needing more education for the job or career they wanted. (There weren’t enough Asian adults without a bachelor’s degree in the sample to analyze separately.) 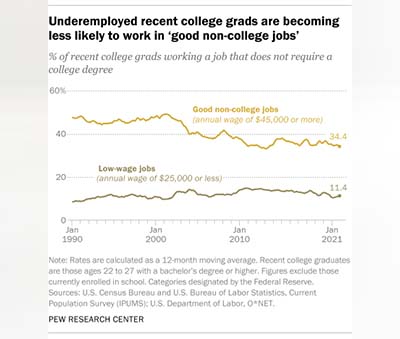 Only 62% of students who start a degree or certificate program finish their program within six years, according to the most recent data from the National Student Clearinghouse, a nonprofit verification and research organization that tracked first-time college students who enrolled in fall 2015 with the intent of pursuing a degree or certificate. The degree completion rate for this group was highest among students who started at four-year, private, nonprofit schools (78.3%), and lowest among those who started at two-year public institutions (42.2%).

Business is the most commonly held bachelor’s degree, followed by health professions. According to the National Center for Education Statistics, about a fifth (19%) of the roughly 2 million bachelor’s degrees conferred in 2019-20 were in business. Health professions and related programs were the second most-popular field, making up 12.6% of degrees conferred that year. Business has been the single most common major since 1980-81; before that, education led the way.

There is a growing earnings gap between young college graduates and their counterparts without degrees. In 2021, full-time workers ages 22 to 27 who held a bachelor’s degree, but no further education, made a median annual wage of $52,000, compared with $30,000 for full-time workers of the same age with a high school diploma and no degree, according to data from the Bureau of Labor Statistics. This gap has widened over time. Young bachelor’s degree holders earned a median annual wage of $48,481 in 1990, compared with $35,257 for full-time workers ages 22 to 27 with a high school diploma. 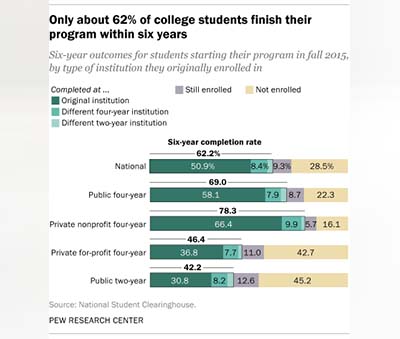 By March 2022, the unemployment rate had nearly returned to pre-pandemic levels for college graduates (2%) while dropping to 3% among those with some college education but no four-year degree, and 4% among those with only a high school diploma. 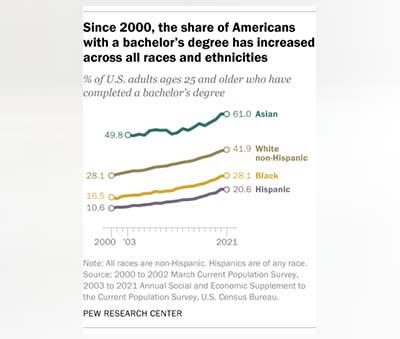 Most Americans with college degrees see value in their experience. In the Center’s October 2021 survey, majorities of graduates said their college education was extremely or very useful when it came to helping them grow personally and intellectually (79%), opening doors to job opportunities (70%) and developing specific skills and knowledge that could be used in the workplace (65%).