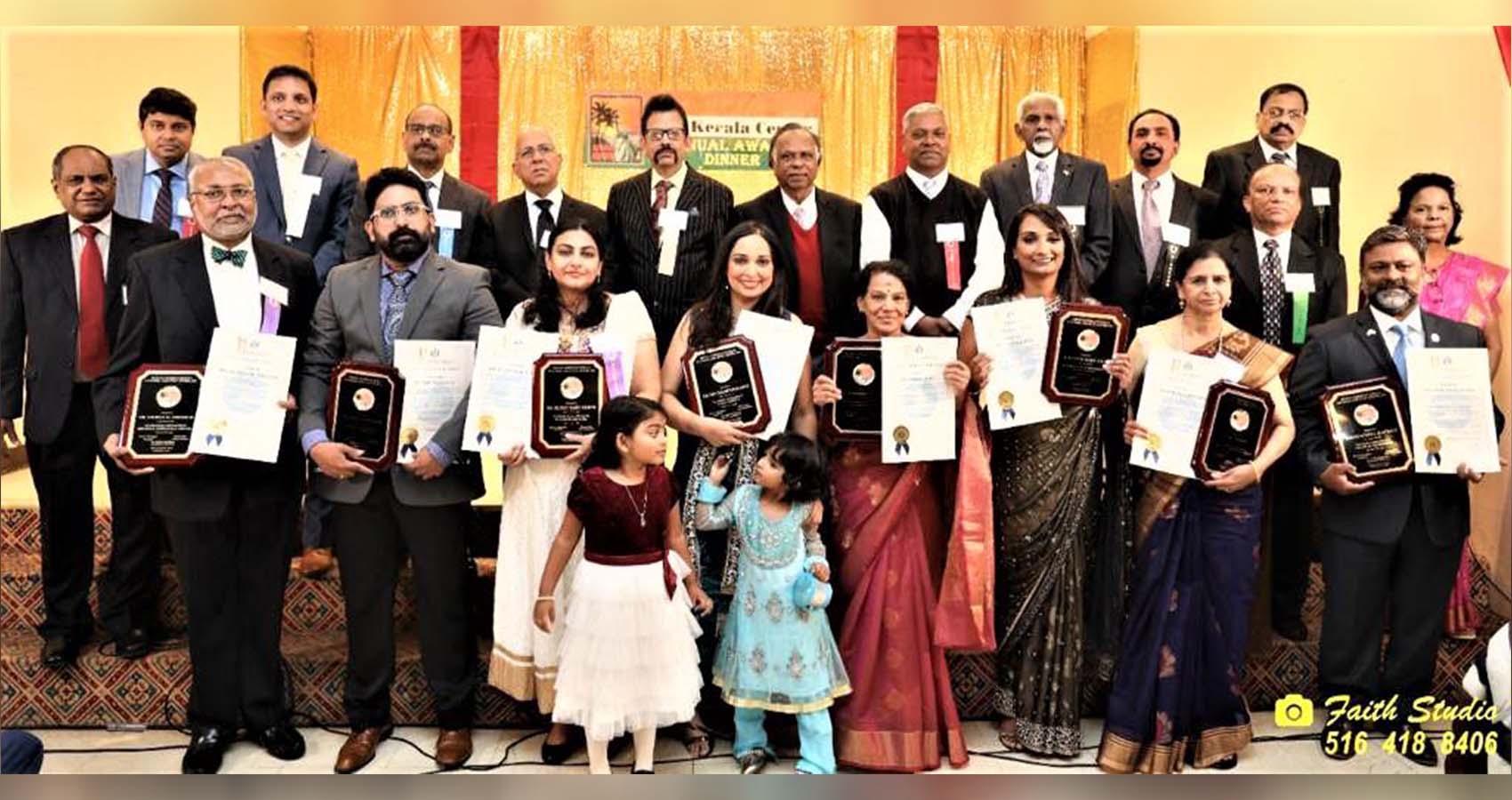 Six outstanding achievers in different categories and two doctors were bestowed special awards for their services during the pandemic at the Kerala Center’s 29th Annual Awards Banquet held at the Center’s auditorium in Elmont, NY on Saturday, November 13th, 2021 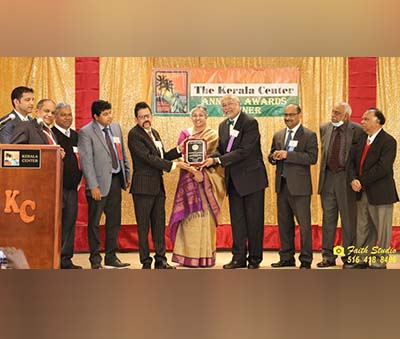 Others who were honored included: Mary Philip, who was a Lieutenant in the Indian Defense Force and a past President of the Indian Nurses Association of New York was honored for notable contributions in Nursing and Community Service; and Nandini P. Nair, Esq, who is a partner and co-chair of the Immigration and Naturalization practice group and serves on the Management Committee at Greenspoon Marder LLP was honored for notable services and achievements in Legal Services. Dr. Sabu Varghese and Dr. Blessy Mary Joseph, practicing physicians in New York were honored with Special Award for notable services during the Pandemic in 2020 and 2021.

The program commenced with the American and Indian National anthems sung by Bailey Stephen and Lauren Joseph.  President Alex K. Esthappan welcomed everybody after a brief introduction of the activities and goals of the Kerala Center. Indian Consul for Community Affairs, A. K. Vijayakrishnan, was the chief guest of the function. In his speech, Mr. Vijayakrishnan said that when the individuals of the community achieve excellence in their fields and do well for the community and society, it makes him happy. Their activities make relations between America and India stronger. The chief guest was introduced by Dr. Madhu Bhaskaran, the chairman of the Award Committee and Board of Directors. 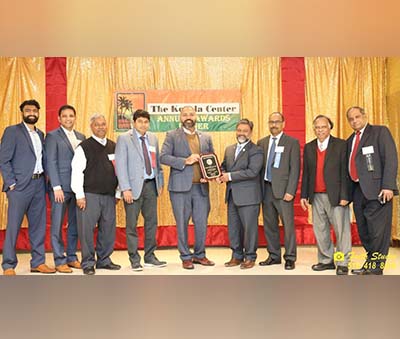 Dr. George Abraham, who was also an awardee, was the keynote speaker.  In his keynote speech, Dr. Abraham implored that we should strive to move forward by including everyone and treating everybody equally, and it is the duty of the leaders to make sure that this is happening. An organization gets much more strength when it becomes a melting pot of people and ideas, he concluded. Dr. George Abraham was introduced by Dr. Thomas Abraham, Chairman of the Trustee Board and Award Committee member and Consul A.K. Vijayakrishnan presented the award. Dr. Thomas Abraham also explained the process of selecting the awardees.

The award for Public Service went to Dr. Devi Nampiaparampil. She reflected in her speech the difficulties she and her family went through during the Covid-19 pandemic, which resulted in her determination to get involved in public service. She thanked the Malayali community for their tremendous support during her campaign for Public Advocate. Dr. Devi was introduced by Raju Thomas, Kerala Center Board Member and Attorney Appen Menon presented the award.

The award for political leadership went to Robin Elackatt, Mayor of City of Missouri City in Texas. He opinioned in his speech that when he came from the red state of Texas to the blue state of New York, he realized that many things he heard was just a story created by CNN. He added that Kerala Center’s award was the first recognition he got after becoming the mayor, whereas, prior to this event, he was receiving only blames. The Mayor was introduced by James Thomas, one of the youth representatives of the Kerala Center and Senator Kevin Thomas, the first Malayalee senator of New York, presented the award.

The award for legal services went to Nandini Nair, Esq.  In her speech, she said that her parents, especially her mother who came alone to the United States with only $7 in her pocket to provide a better life for her family, is her guide and role model. She feels grateful that she is able to help so many new comers as an immigration attorney today. Nandini Nair was introduced by Dr. Theresa Antony, Kerala Center board member and Dr. Asha Ramesh of Sabinsa Corp. presented the award.

The award for Nursing and Community leadership went to Mary Philip. In her speech she stated that Kerala Center’s activities are unique in nature and separates it from other organizations. She specifically mentioned the recognition of Nurses and other front-line workers and organizing flag hoisting by retired Indian Defense Force members on Indian Independence Day celebration as examples. Mary Philip was introduced by Christy John, NP and Dr. Unni Moopan, Kerala Center Trustee, presented the award. 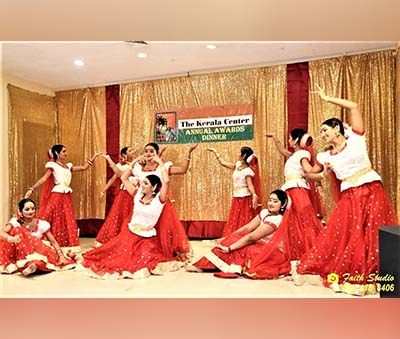 The award for performing Arts went to Chandrika Kurup. In her speech, Mrs. Kurup expressed a lot of satisfaction that her students are now running their own successful dance schools and other related artist works here in America and in Kerala. Chandrika was introduced by Annie Esthappan, one of the youth representatives of the Kerala Center and former student of Mrs. Kurup, and Abraham Philip, CPA, presented the award.

The Kerala Center also honored two doctors. Dr. Sabu Varghese and Dr. Blessy Mary Joseph, with special awards for their services during the pandemic. They were introduced by Benzy Thomas, DNP, whose description of her experience treating Covid-19 patients were so touching to the audience. When Dr. Sabu explained his experience with a covid patient who was a doctor and his colleague who had to be on ventilator for more than six months, it was heart breaking.

When Dr. Blessy spoke about her experience treating Covid patients, she could not control her emotions. Jose Kadapuram, Director of Kairali TV, USA, presented the award to Dr. Sabu and G. Mathai, trustee of Kerala Center, presented the award to Dr. Blessy Joseph. Their service to New Yorkers including Malayalees during the height of the pandemic is unforgettable.  Each of the awardees was also presented a citation from New York State Senate and was presented by New York State Senator Kevin Thomas.

As part of the Award Ceremony, a Souvenir was released by the committee chairman P.T. Paulose along with other committee members, John Paul and Abraham Thomas. by giving a copy of the Souvenir to Dr. Susan George, spouse of the keynote speaker Dr. George Abraham.

In the absence of Founder President Mr. E. M. Stephen, who was in charge of the Center for the last thirty years, Executive Director Thambi Thalappillil and Director Abraham Thomas took charge of the event.

James Thottam was the chairman of the Award Dinner. The MC of the program, Daisy Palliparambil, impressed everybody with her outstanding performance. The songs sung by famous singer Shalini Rajendran and Lauren Joseph and dance by artists of the Noopura School of Dance made the awards night a more colorful one.

Secretary Jimmy John concluded the ceremony with a vote of thanks to the guests, awardees, audience and everyone worked so hard to make it a successful event. With dinner, the Award Night came to an end.

The Kerala Center, located at Elmont (Long Island, New York), is an IRS Tax-Exempt 501 (c) (3) organization serving the Keralites and the Indian American community in the tri-state New York area. It was inaugurated in 1993. Kerala Center’s awards are the most prestigious among Indian American Malayalees.