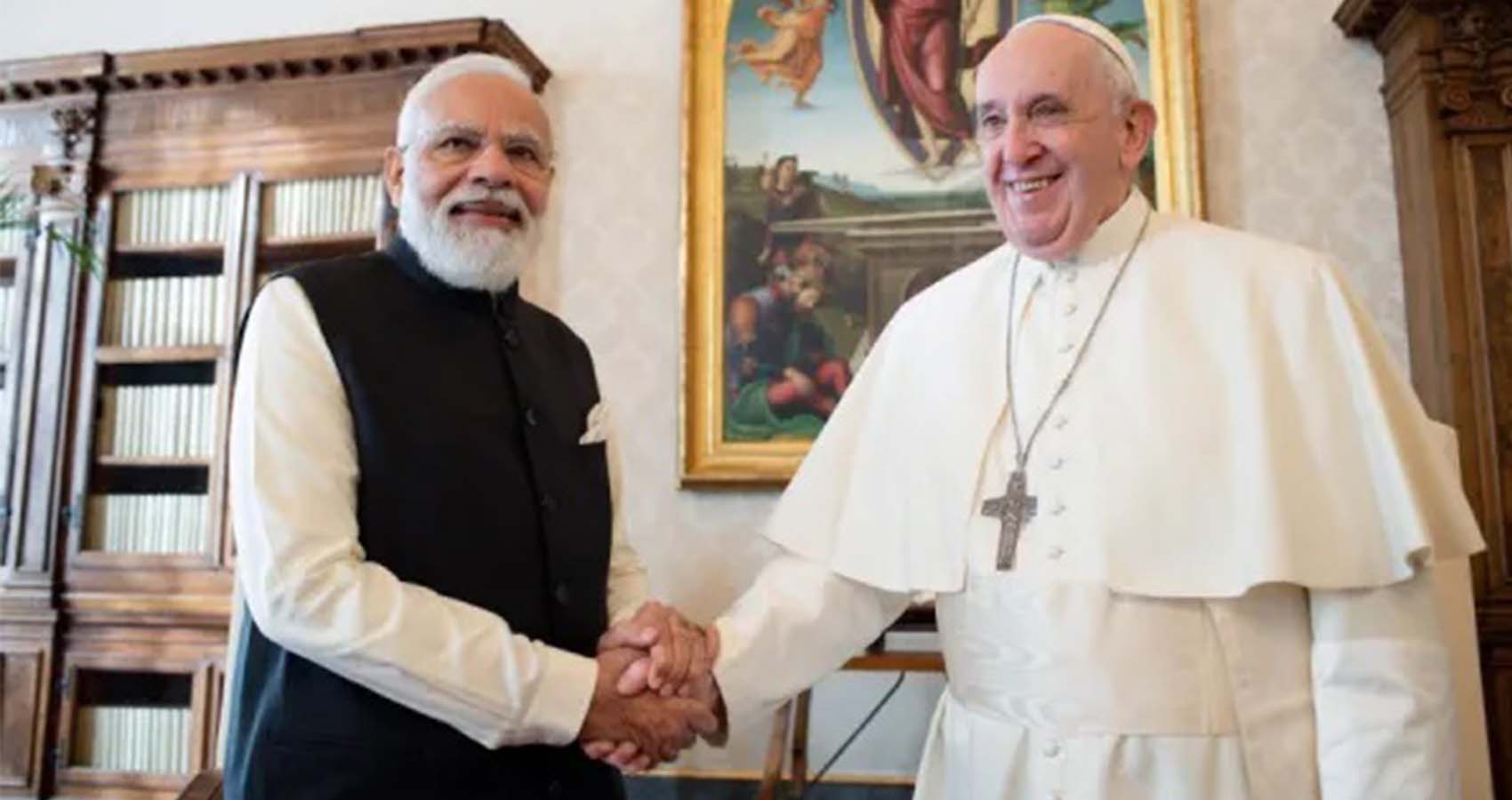 Prime Minister Narendra Modi met Pope Francis at the Vatican Saturday in his first meeting with the head of the sovereign of the Vatican City State on Saturday, October 30, 2021. The meeting between the Hindu nationalist party leader and Pope Francis, the head of the Roman Catholic Church, assumes significance as it comes at a time when Christians in many parts of India have been complaining of harassment and attacks on the community and its institutions. 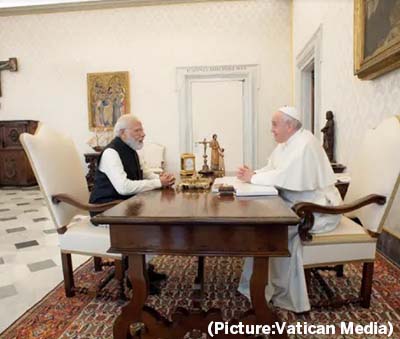 The two leaders discussed with Pope Francis issues covering a range of areas of interest, including COVID-19, general global perspectives and maintaining peace and tranquility. After the meeting, Modi tweeted, with pictures of him embracing the Pope, “Had a very warm meeting with Pope Francis. I had the opportunity to discuss a wide range of issues with him and also invited him to visit India.”

A Vatican source has told the media that Vatican officials were “happily surprised” by the invitation, as they had no advance notice from either the government or from the Catholic Church in India that Mr. Modi would invite the pope to visit the country. Because Pope Francis and the Catholic Church and Christians in India consider the visit very important, it is likely to be given priority in Vatican scheduling; it could even take place in the second half of next year, according to reports.

The meeting took place in the pope’s private library on the second floor of the Apostolic Palace in the Vatican. Pope Francis, the leader of more than 1.3 billion Catholics worldwide, and Mr. Modi, who governs the world’s largest democracy of almost 1.4 billion people, sat at a table and talked together with the aid of interpreters for 55 minutes.

The meeting was long by Vatican standards. The Vatican issued a very brief statement that revealed almost nothing of the content of their conversation except to say that they acknowledged the good relations that exist between India and the Holy See. The Holy See and India established diplomatic relations in 1948, soon after the country gained its independence. 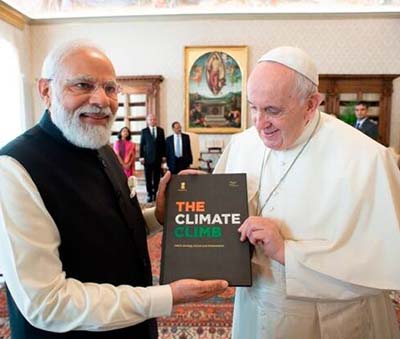 Pope Francis and the Prime Minister then exchanged gifts. Modi gave the Pope a silver candlestick and a copy of The Climate Climb. Pope Francis gave Modi a bronze plaque with the inscription “the desert will become a garden,” and copies of the pope’s writings, including his encyclicals “Laudato Si’” and “Fratelli Tutti,” as well as the “Document on Human Fraternity” and his message for the 2021 World Day of Peace.

Pope Francis would be the third pope to visit India. Paul IV traveled to Mumbai in 1964 to attend the International Eucharistic Congress, while John Paul II visited India in February 1986 and again in November 1999, the latter time for the presentation of his Post-Synodal Apostolic Exhortation “Ecclesia in Asia.”

Modi is the fifth Indian Prime Minister to have visited the head of Roman Catholics, the largest religious denomination in the world. Before Modi, Prime Ministers Jawaharlal Nehru, Indira Gandhi, I K Gujral, and Atal Bihari Vajpayee had met the then Popes in the Vatican. It is not just Prime Ministers who have paid a visit to the Holy See. Communist veteran and former Chief Minister of Kerala E K Nayanar presented a Bhagavad Gita to Pope John Paul II in 1997 and he kept a rosary presented by the Pope throughout his life. Nayanar was accompanied by current Kerala Chief Minister Pinarayi Vijayan, who was then a minister in his government. When he visited Pope Francis in October 2019, Union Minister V Muraleedharan also gifted a Bhagavad Gita to him.

The Prime Minister’s meeting with the Pope has been welcomed by the Church. Major Archbishop Baselios Cardinal Cleemis, who was the President of the Catholic Bishops Conference of India (CBCI) and who had requested Modi to invite the Pope to India in 2014, saw it as a fresh opportunity for dialogue between the government and the community. “This has a historical importance,” Cardinal Cleemis said. 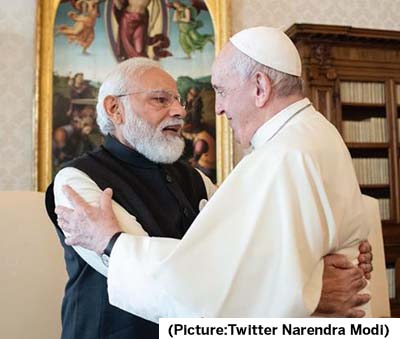 “The meeting should not be seen merely as the one between two country heads, rather it was the head of the largest democracy and an ancient culture of the world meeting the head of the largest religious community in the world. This brings in hope for enhancing human fraternity and caring for the poor, because that’s what Christianity stands for. It would bring in positive efforts in India for a mutual trust and collaboration between people of different religious groups. It would also contribute to the very need for dialogues. We are very delighted that the Prime Minister has opened ways for a Papal visit to India,” the Cardinal Cleemis told the media.

Modi’s visit has been excitedly welcomed by the Catholic Church. Even before the government officially announced the visit, the president of the Kerala Catholic Bishops Conference, Cardinal George Alenchery, issued a statement that it would “add more energy and warmth to the relations between our country and the Vatican and the Catholic Church”. According to media reports, the welcome note by Cardinal Cleemis and earlier by Cardinal George Alencherry, President of the Kerala Catholic Bishops Conference (KCBC), have rekindled the BJP’s hopes on building confidence in the community towards the party, leaders said.

Christians account for some 2.3 percent of India’s population, behind Hindus who make up 79.8%, and Muslims are 14.2%. of the total Indian population. With over 28 million Christians living across India, including 20 million Catholics, the Catholic Church plays a significant social role in India—especially in the fields of education and health care.

One contentious issue between Christians and Modi’s political party, the Bharatiya Janata Party, is Christian proselytization in India, which Hindu fundamentalists and some politicians in the BJP have accused Christians and the Catholic Church of in the past. Pope Francis has stated clearly that the church has no intention of proselytizing in India.

A joint fact-finding team of non-governmental organisations, including the Association for the Protection of Civil Rights, United Against Hate and United Christian Forum, recently presented a report – after visiting Uttar Pradesh and Uttarakhand – which pointed out a series of attacks against Christians and churches in these states. Sources in the Catholic Church in the national capital said the influential Kerala Church has been ignoring the attacks against the community in northern parts of the country.

With Christians being a community that the ruling Bharatiya Janata Party (BJP) wants to establish as its support base to retain power in poll-bound Goa and Manipur and to emerge as a formidable electoral force in Kerala,  Modi’s meeting with Pope Francis, and his invitation to the Pontiff to visit India assumes much significance, sources in the BJP said.

While Christians in Kerala comprise 18.38 per cent of its population, in Goa it is 25.1 per cent while the figure is 41.2 per cent in Manipur. Both Manipur and Goa are headed for polls early next year. Despite its desperate attempts, the BJP’s vote share has gone down from 15.53 per cent (2019) to 12.47 per cent in the Assembly elections held on April 6 this year. Political observers pointed out that the fall in vote share indicated that there was no overwhelming support for the party’s candidates from the Christian community.

Pointing out that minorities, both Christians and Muslims, have been the “subject of consistent attacks” by right-wing forces since the BJP came into power in 2014, Father Suresh Mathew, editor of church publication Indian Currents said, “BJP has spared no efforts and even supported every attack and hate speech against Christians. Several states have enacted anti-conversion laws which are in violation of the Constitution. Time has come for the Church leadership in India to shed diplomacy and express their concern for religious freedom and human rights protection,” Fr Mathew said.

The Prime Minister, who is in Italy to attend the G20 Summit, briefed the Pope about the ambitious initiatives taken by India in combating climate change as well as India’s success in administering one billion Covid-19 vaccination doses. Prime Minister Modi will also attend the Climate Summit to be held in Glasgow from Sunday. His Holiness appreciated India’s assistance to countries in need during the pandemic, the release said. At the end of the audience, Pope Francis escorted Modi to the door and said, “I am happy, very happy. Pray for me!” Mr. Modi responded, “I hope to see you in India.”