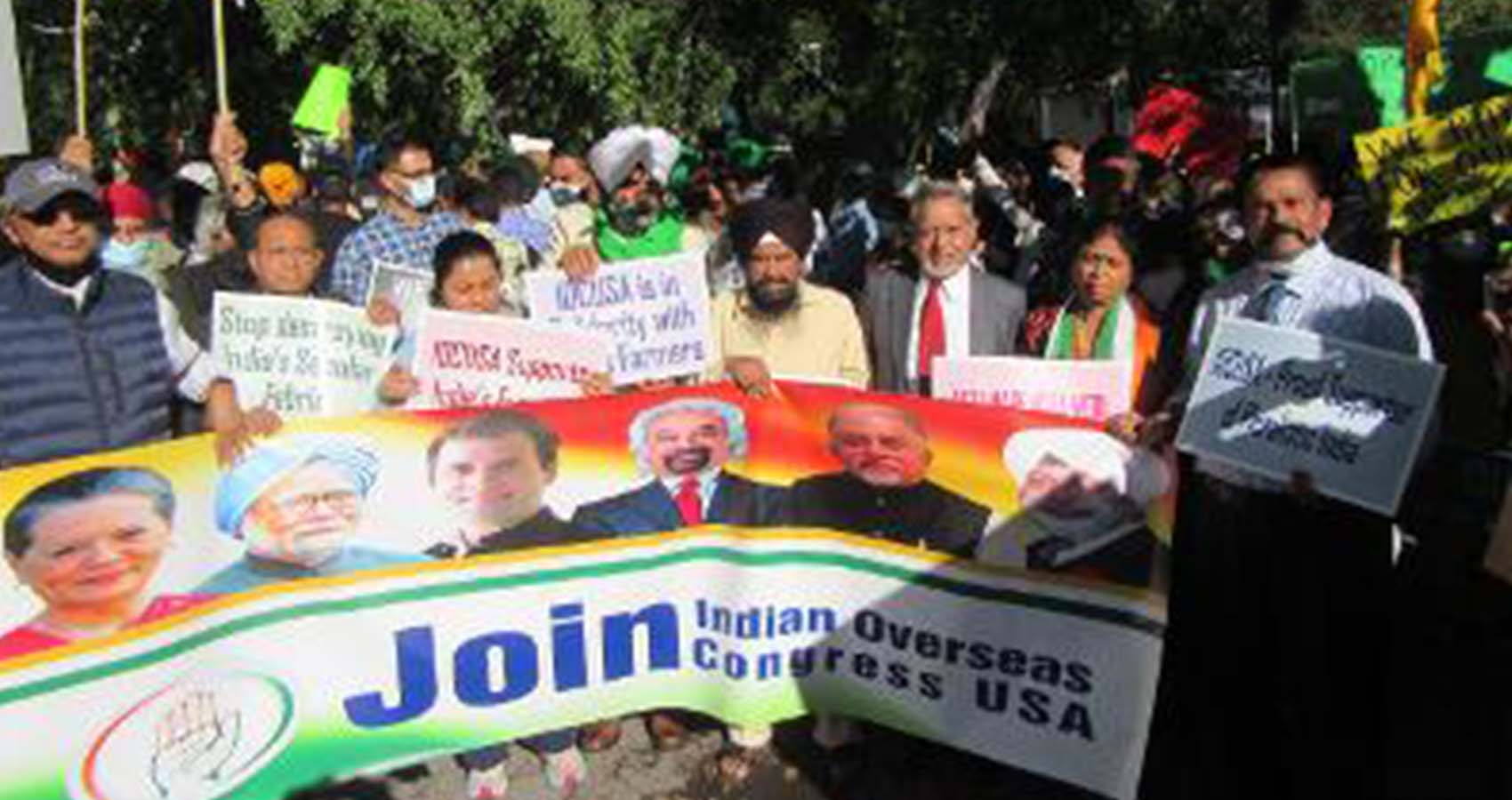 Several separate protests were held outside the UN on Saturday, September 25th as Prime Minister Narendra Modi addressed the United Nations General Assembly. The groups were separated from each other in enclosures put up with police barriers, advocating different causes.

While observers said it was “shameful” that President Biden failed to publicly address widespread persecution of religious minorities in India when he met with Indian Prime Minister Narendra Modi Friday, more than 100 members of interfaith and human rights groups spoke out as Modi addressed the United Nations General Assembly. Speakers condemned the egregious human rights violations and murders of religious minorities in India under a government that openly supports Hindu supremacy.

Another group comprising of 100 Khalistan supporters waving yellow flags and carrying portraits of Simranjit Singh Mann, the president of the Shiromani Akali Dal (Amritsar), came in support of the Khalistan movement. The organizers of the other protests disowned the Khalistanis and said they were not associated with them, pointing to the barriers separating them from that group.

Another protest was organized by a local gurdwara in support of the farmers’ agitation in India focused solely on the agriculturists’ issues. They stationed themselves far from the Khalistanis and an organizer said that they did not have anything to do with that protest and distinguished themselves with green turbans.

The Hindus for Human Rights (HHR) organized yet another protest that was sandwiched between the Congress and Khalistani protests. An organizer said that they were not associating themselves with the Khalistanis and their enclosed barrier next to that group’s was assigned by the police.

HHR protested against the Citizenship Amendment Act (CAA), the National Register of Citizens (NRC) and other laws and regulations, as well as what they called human rights violations and detention of activists in India.

They were joined by a representative of the New York State Council of Churches, a protestant organization that also lists the World Council of Churches among its members. Its executive director, Peter Cook, a protestant pastor who said he had been deported from India, asserted that his organization opposed the CAA even though it gave citizenship rights to Christians fleeing persecution, because it “pits Christians against Muslims”.

The Khalistani protesters, who were not allowed by the police to demonstrate outside India’s mission to the UN, drove past it in cars flying their flags and raising slogans. Supporters of Kashmiri separatists and Pakistanis, who held protests in the previous years, were not seen this time.

“As religious people, we have a responsibility to build an inclusive multi racial democracy. So when Israeli Prime Minister Netanyahu comes to New York in the name of perverting my religious tradition, Judaism, it is a way of creating religious oppression, and it is important for me to stand here. And when Indian Prime Minister Modi comes here, we organize in solidarity to demand that we build a world not on theocratic or fascist principles,” said Brad Lander, New York City Councilmember and comptroller elect.

Hindu Pandit Sanjai Doobay said: “As Hindus, we salute the light, ‘Shubham Karoti Kalyanam.’ As Muslims, ‘Allah is the Light of the heavens and the earth.’ And the Christian Bible says God said, ‘Let there be light, and there was light.’ If we are together, our light will always be brighter. We will pray for that light, for that peace. Mr. Modi, your Hindutva is not my Hinduism. You are not Hindu. A Hindu is a brother or sister of Humanity.”

“As Christians, we grieve for many Hindus who watch their faith being co-opted and distorted by nationalist government using Hinduism to oppress people of other faiths,” declared Rev. Peter Cook, New York State Council of Churches. “In Jesus’ name, I condemn the government of any country which uses the dominant faith of its people to destroy democracy and deny the freedom and human rights of religious minorities. In this spirit, we call on the Modi government to stop distorting Hinduism to give tacit approval to the burning and desecration of churches, mosques and temples.”

The Indian Overseas Congress, USA, an advocacy organization that promotes democracy, human rights, and equal justice together with its supporters and friends, held a protest rally in front of the United Nations, as Prime Minister Narendra Modi was delivering his address to the General Assembly.

“Although we have no issues with a Prime Minister of India visiting the U.S. or the U.N. and promoting better bi-lateral relations or promoting world peace, it is imperative to let him know at the same time that we do not approve of his misgovernance in dealing with COVID epidemic or undermining the democratic institutions,” said George Abraham, Vice-Chairman of the IOCUSA. “If there is to be genuine economic progress and social development in India, political tranquility and social harmony is a prerequisite without which there would be very little hope for the future. Let us, at the minimum, raise our voices, no matter how feeble it may be, because one day our next generation might ask where you have been when India took a turn towards authoritarianism and fascism,” Abraham added.

“I am glad to state that IOCUSA stands firmly behind India’s farmers who have been denied their rightful voice and concerns to be heard by the Modi government which has pushed a set of bills through the parliament for the benefit of the crony capitalists and to the detriment of our farmers” Mr. Mohinder Singh Gilzian, President of the IOCUSA said.  “We want Modi to know that the NRI voice will continue to be raised in support of their protest unless and until he resolves these issues,” Mr. Gilzian added.

Secretary General Harbachan Singh referring to the plight of the farmers suggested that a Prime Minister should not abuse his power or shirk his responsibility and torture peaceful farmers protesting for their legitimate concerns by not heeding to their concerns.”  It is claimed that this is perhaps the largest and the longest peaceful protest rally in the history of the world.

The protesters carried slogans and chanted examples to point out the failures of the Modi government, e.g. “Anti-Narendra Modi isn’t anti-national,” “We are all Indians. Stop discrimination based on religion, caste and language”, “Protect India’s constitution”, “IOCUSA supports democracy, freedom, and human rights”,” IOCUSA supports India’s farmers”, “IOCUSA -proud supporter of pluralistic India” and so forth.