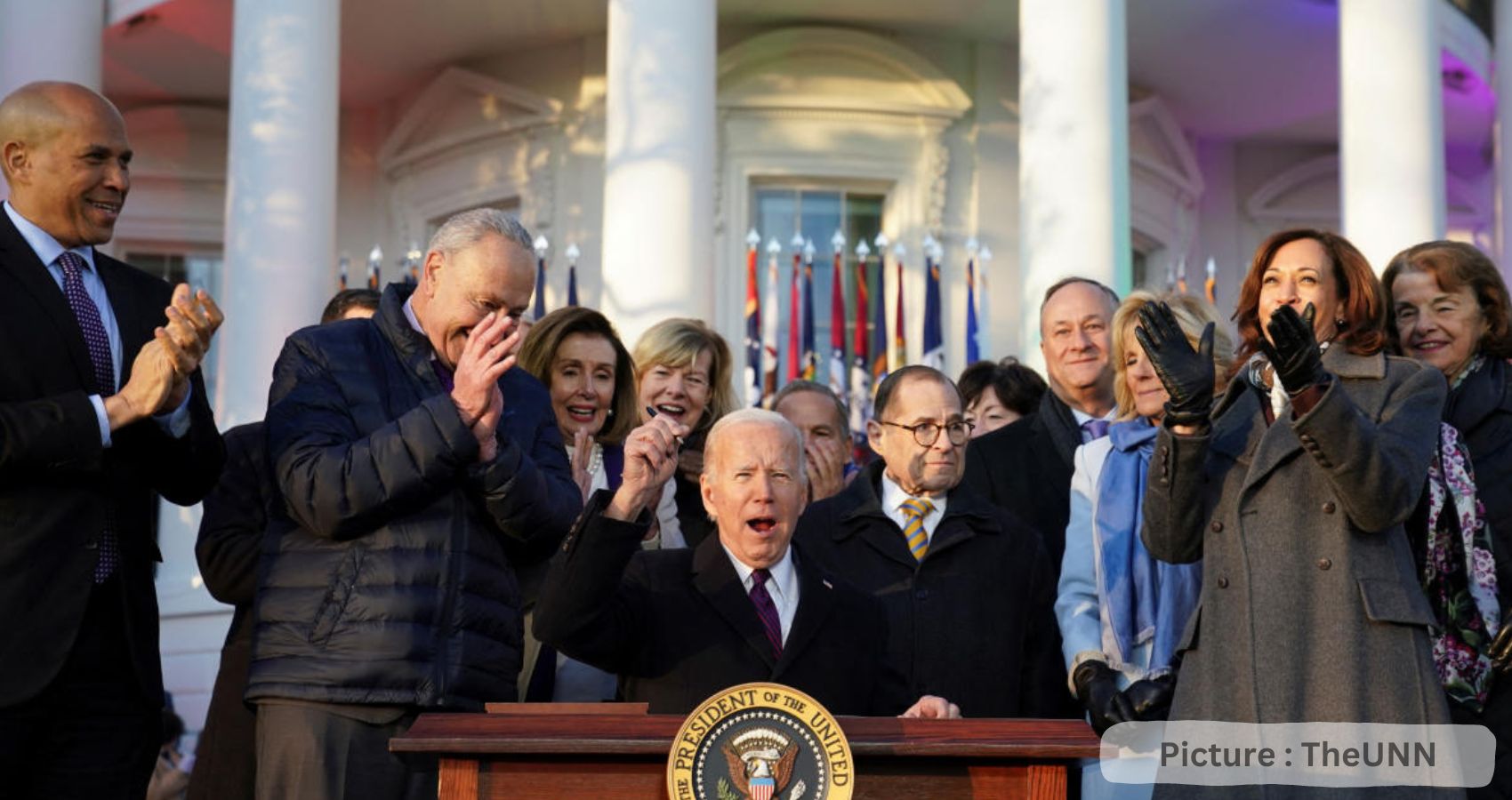 “Today is a good day,” he said. “A day America takes a vital step toward equality, toward liberty and justice, not just for some but for everyone. To creating a nation where decency, dignity and love are recognized, honored and protected. “

“Today is a good day,” he said. “A day America takes a vital step toward equality, toward liberty and justice, not just for some but for everyone. To creating a nation where decency, dignity and love are recognized, honored and protected. “

The South Lawn ceremony featured hundreds of enthusiastic guests, musical performances and remarks from Vice President Kamala Harris, Senate Majority Leader Chuck Schumer and House Speaker Nancy Pelosi. Among those performing was singer Cyndi Lauper, who spoke at a press briefing earlier in the day, saying, “Bless Joe Biden and all the people that worked on this for allowing people not to worry and their children not to worry about their future.”

Biden praised the bipartisan effort in Congress and the decades of legal battles from couples fighting for marriage equality, including the 1967 Loving v. Virginia ruling, which struck down laws in 16 states that banned interracial marriage.

The push for the bill came amid fears that the conservative majority on the Supreme Court could overturn the 2015 ruling Obergefell v. Hodges, which found that same-sex couples have the right to marry. If Obergefell were to fall, individual states would be allowed to decide their policy on same-sex marriage, just as this summer’s overturning of Roe v. Wade allowed states to regulate abortion access.

The law does not force any state to allow same-sex marriages but does require it to recognize a union that occurred in another state. Under the new law, every state will have to recognize legal marriages regardless of “sex, race, ethnicity or national origin” and to guarantee access to federal spousal benefits and protections.

The law repeals a provision of the 1996 Defense of Marriage Act, or DOMA, that allowed states to discriminate against same-sex couples, adding that “an individual shall be considered married if that individual’s marriage is between 2 individuals and is valid in the State where the marriage was entered into.” The law also allows individual churches to refuse to hold same-sex weddings, part of religious freedom language used to court the necessary Republican votes in the Senate.

Jim Obergefell, the plaintiff in the case that bore his name, told CNN last month that he was not celebrating.

“I will say I’m happy that at least something has been done, something that we will have to fall back on should the Supreme Court overturn Obergefell in the future, but this act, I find it curious that it’s called the Respect for Marriage Act, because this act does not respect LGBTQ+ community, our marriages, our relationships or our families,” he said. “The fact that this act would allow states to once again deny marriage licenses to same-sex couples — where is the respect in that?”

Jim Obergefell, the plaintiff in Obergefell v. Hodges, speaks outside the U.S. Supreme Court on April 28, 2015, the day oral arguments were heard in the case. (Olivier Douliery/Getty Images)

Biden noted during his remarks that the fight is not done, citing the need for the Equality Act, which would expand federal civil rights protections from discrimination in areas like housing and employment to LGBTQ people.

“When a person can be married in the morning and thrown out of a restaurant for being gay in the afternoon, this is still wrong,” Biden said. “That’s why the people you heard speak today continue to fight to pass the Equality Act. When hospitals, libraries and community centers are threatened and intimidated because they support LGBTQ children and families, we have to speak out.”

The Respect for Marriage Act passed the House last week and the Senate at the end of November. Every Democratic legislator in both chambers voted in support, with 12 Republican senators and 39 GOP House members also voting yes.

When the bill passed the Senate last month, Schumer called it “vindication” for the plan that he and other supporters developed to delay pushing for the legislation until after the midterm elections, saying, “The wait was worth it.”

Enthusiasm for codifying protections for same-sex marriages increased this summer after the Supreme Court overturned Roe and stripped millions of Americans of access to abortion. In his concurring opinion, Justice Clarence Thomas suggested the court reconsider its positions on gay marriage and contraceptives. His comments came as Republicans across the country have increased their anti-LGBTQ rhetoric and legislative proposals, while law enforcement has warned of potential threats to the LGBTQ community. The president noted both Thomas’s opinion and the wave of legislation targeting transgender youth during his speech Tuesday afternoon.

The signing of the bill continues a personal evolution for Biden. As a senator he voted for DOMA in 1996, but as vice president he publicly supported same-sex marriage before then-President Barack Obama in 2012, saying, “I am absolutely comfortable with the fact that men marrying men, women marrying women and heterosexual men and women marrying one another are entitled to the same exact rights, all the civil rights.”

Supporters praised Sen. Tammy Baldwin, D-Wis., the first openly gay senator, for her work to negotiate the legislation, with Biden calling her “a real hero.” After the bill passed the House last week, the first congressman to voluntarily come out as gay, Barney Frank, touted her efforts.

“Tammy, through her own life experience, understood what troubles this [the possibility of Obergefell being overturned] caused for same-sex married couples all over the country, and she understood that resolving those fears was much more important than any political issues,” the longtime Massachusetts congressman, who retired in 2012, said. “She stood up, and she was proven right. And I hope people will now take this as an example of responsible legislating, not being panicked by people who have more emotion than intelligence on an issue. I just wanted to pay tribute to one of the great legislative achievements I’ve ever seen, Tammy shepherding this bill through.”