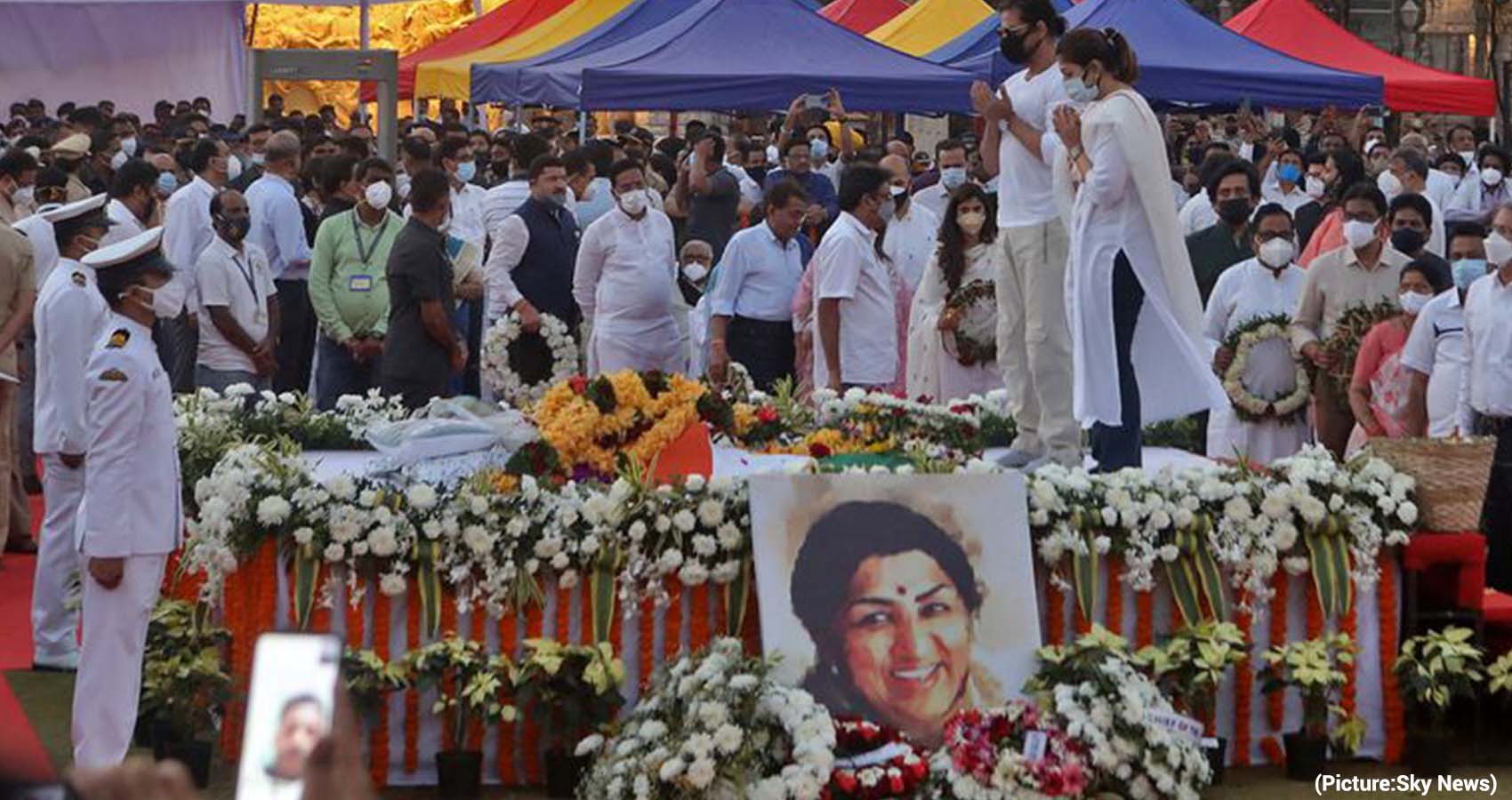 Legendary singer Lata Mangeshkar, who died in Mumbai at the age of 92, was an Indian cultural icon and national treasure who made her name in Bollywood – despite only actually appearing on screen in a handful of films.

Lata Mangeshkar, who died on Sunday, February 6th after weeks of hospitalization, was cremated with full state honors at Mumbai’s iconic Shivaji Park bringing an end to a splendid and decorated career spanning seven decades. Just before the last rites, the national flag in which the body was draped, was handed over to the family members. Lata Mangeshkar’s brother Hridaynath Mangeshkar lit the funeral pyre of the singing legend.

A recipient of the Bharat Ratna, Padma Vibhushan, Padma Bhushan and Dadasaheb Phalke Awards, Lata Mangeshkar was an icon of Indian cinema, having sung playback for an extensive list of Hindi films.

The classically-trained star rose to fame in India’s booming film industry as a “playback singer”, providing the singing voice to Bollywood’s lip-synching movie stars over the course of a career which spanned more than half a century.

For decades, the “nightingale of India” was the country’s most in-demand singer, with every top actress wanting her to sing their songs. Her records, meanwhile, sold in the tens of thousands, and she boasted a back catalog of thousands of songs spanning numerous genres and a total of 36 languages.

But she was also much more than her voice. Mangeshkar was a passionate cricket fan and had a love for cars and the slot machines of Vegas. She also rubbed shoulders with some of Bollywood’s brightest stars – and at least one Beatle. 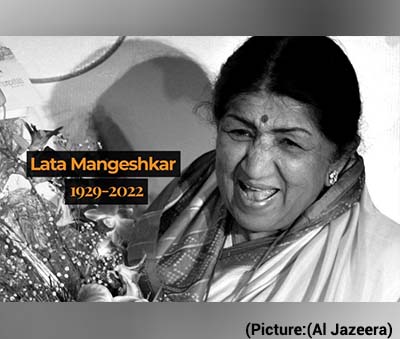 Mangeshkar, or Lata Didi, as she was fondly called, came from a household that worshipped music. Her father Dinanath Mangeshkar was a towering personality in Marathi theatre. He acted, produced and sang songs in plays that would change the face of Marathi theatre. He was one of the foremost exponents of Natya Sangeet and an accomplished Hindustani classical singer. His mother Yesubai, an accomplished singer from the devadasi community, was one of Portuguese India’s (now Goa) most famous temple singers and dancers.

Born in September 1929, Lata was the first among her siblings – sisters Meena, Asha (Bhosle), and Usha, and brother Hridaynath – that ruled over Marathi and Hindi film music for decades. She was initially named Hema, but her father changed it to Lata after a character in one of his plays.

Their ancestral family name was Hardikar, but their paternal grandfather Ganesh Bhatt Hardikar was given the honor of performing the abhishek (ritual bathing of the deity) at Mangeshi temple in Goa, and they took on the family name Abhisheki. The late Hindustani classical maestro and scholar Jitendra Abhisheki is from the same family and a cousin of the Mangeshkar siblings. Later, Dinanath would adopt his last name from the temple, and call himself Mangeshkar. The name stuck.

Though Lata had started singing in movies by the age of 13 in 1942, it was her breakthrough performance in Majboor in 1948 that catapulted her into mainstream Hindi films. Her mentor was music director Ghulam Haider, who, the story goes, was so angry when producer Sashadhar Mukherjee rejected Mangeshkar’s voice for being “too thin” thundered to him that he would one day fall at Lata’s feet and beg her to sing in his movies.

Mangeshkar confirmed this incident in film historian Raju Bhartan’s biography on her. On several occasions, she credited Haider as her mentor. “He was the first music director who showed complete faith in my talent,” she said in 2013.

After Majboor’s success in 1948, she would achieve greater fame the next year when she sang the haunting “Aayega aanewala” in the runaway hit Mahal, whose music director Khemchand Prakash was later credited with mainstreaming another talent – Kishore Kumar. With Aayega aanewala, Mangeshkar had truly arrived, and was seen to have stepped out of the shadow of another film singing legend, Noor Jehan.

Prime Minister Narendra Modi visited the Shivaji Park to pay his last respects to the singer and met the Mangeshkar family members and consoled them. He left the venue before the funeral.

Earlier in the day, the Prime Minister tweeted saying he is “anguished beyond words”. “The kind and caring Lata Didi has left us. She leaves a void in our nation that cannot be filled. The coming generations will remember her as a stalwart of Indian culture, whose melodious voice had an unparalleled ability to mesmerise people,” he said in a tweet.

Congress leader Rahul Gandhi said she remained the “most beloved voice of India for many decades” and added that her immortal golden voice will continue to echo in the hearts of her fans.

One of the famous episodes of her life is when her music moved Jawaharlal Nehru to tears. On January 27, 1963 during the backdrop of the India-China war, Lata Mangeshkar sang Aye Mere Watan Ke Logon in the presence of the then Prime Minister Jawaharlal Nehru, bringing him to tears.

Subcontinent leaders, including Pakistan’s Imran Khan, sent their tributes to the legendary singer.

“With the death of Lata Mangeshkar the subcontinent has lost one of the truly great singers the world has known. Listening to her songs has given so much pleasure to so many people all over the world,” Imran Khan tweeted.

Lata Mangeshkar’s death has created a “great void in the subcontinent’s musical arena”, Bangladesh Prime Minister Sheikh Hasina said as she recalled ‘the empress of music’ with gratitude for her role in the Liberation War of 1971 against Pakistan.

Nepal’s President Bidya Devi Bhandari recalled the contribution of “genius” Lata Mangeshkar to Nepali songs as she paid her tribute to the singer.

“I am saddened by the news of the demise of famous Indian singer Lata Mangeshkar, who has also lent her melodious voice to many Nepalese songs,” Ms Bhandari tweeted in Nepali language.

Lata Mangeshkar, who belonged to a prominent musical family, also composed music as well as produced a handful of films. She was popularly known as the ‘Nightingale of India.’

In her melodious voice, Lata Mangeshkar had sung over 50,000 songs in 14 languages since her radio debut in 1941.

The central government has announced a two-day “state mourning” on the death of the legendary singer. The national flag will fly at half mast from February 6 to February 7 throughout India and there will be no official entertainment in this period.