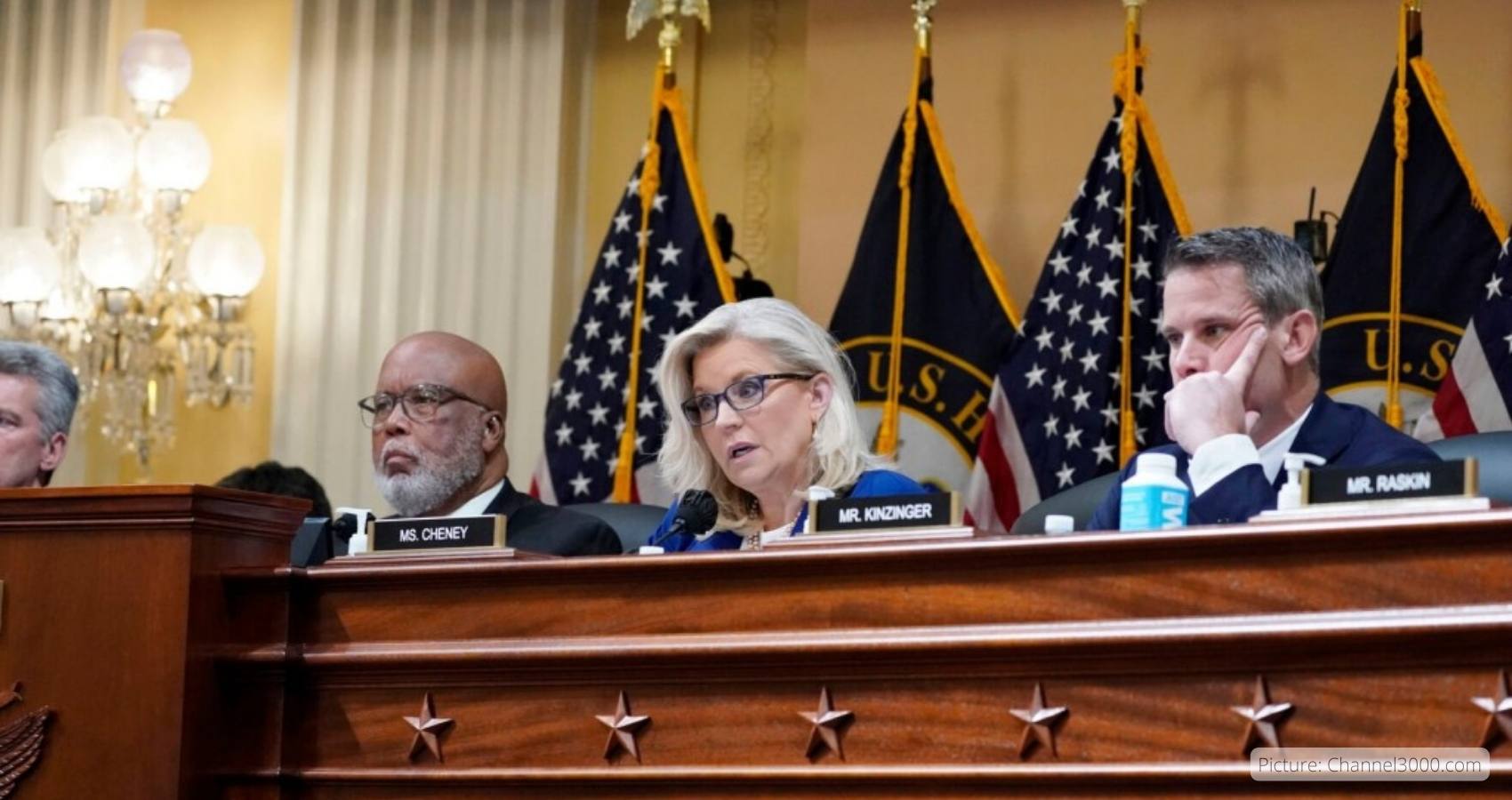 The House select committee investigating the January 6, 2021, attack at the US Capitol voted to subpoena former President Donald Trump during a public hearing on October 13th. The House Jan. 6 committee voted unanimously to subpoena former President Donald Trump, demanding his personal testimony as it unveiled startling new video and described his multi-part plan to overturn his 2020 election loss, which led to his supporters’ fierce assault on the U.S. Capitol.

Three phrases were echoed over and over again on Thursday by the panel’s nine members, who repeatedly mentioned Trump’s motivation, intent or state of mind — a callout to elements prosecutors would need to demonstrate if they choose to pursue charges against Trump.

With alarming messages from the U.S. Secret Service warning of violence and vivid new video of House Speaker Nancy Pelosi and other congressional leaders pleading for help, the panel on Thursday showed the raw desperation at the Capitol. Using language frequently seen in criminal indictments, the panel said Trump had acted in a “premeditated” way before Jan. 6, 2021, despite countless aides and officials telling him he had lost. 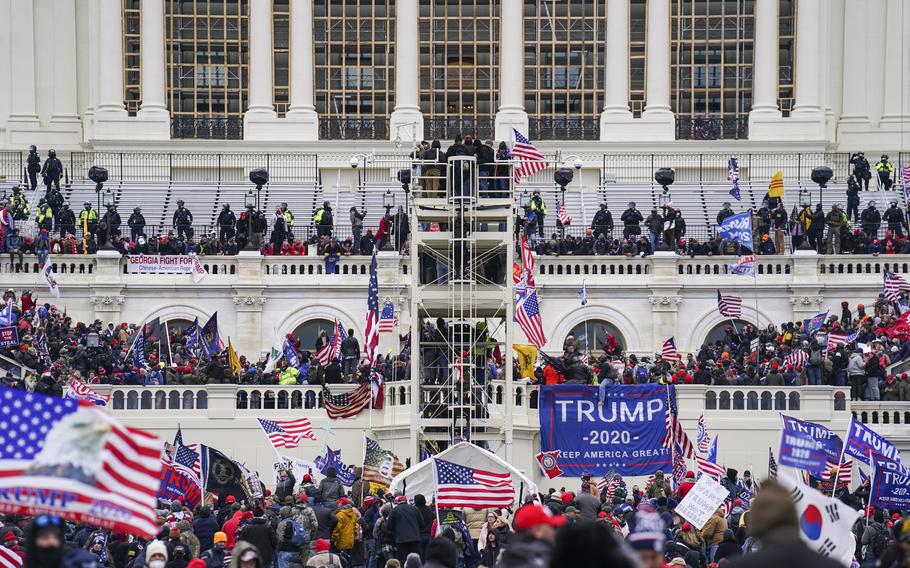 Trump is almost certain to fight the subpoena and decline to testify. On his social media outlet he blasted members for not asking him earlier — though he didn’t say he would have complied — and called the panel “a total BUST.”

“We must seek the testimony under oath of January 6′s central player,” said Republican Rep. Liz Cheney of Wyoming, the committee’s vice chair, ahead of the vote.

In the committee’s 10th public session, just weeks before the congressional midterm elections, the panel summed up Trump’s “staggering betrayal” of his oath of office, as Chairman Bennie Thompson put it, describing the then-president’s unprecedented attempt to stop Congress from certifying Democrat Joe Biden’s victory.

While the effort to subpoena Trump may languish, more a nod to history than an effective summons, the committee has made clear it is considering whether to send its findings in a criminal referral to the Justice Department.

In one of its most riveting exhibits, the panel showed previously unseen footage of congressional leaders phoning for help during the assault as Trump refused to call off the mob.

Pelosi can be seen on a call with the governor of neighboring Virginia, explaining as she shelters with Senate Democratic leader Chuck Schumer and others that the governor of Maryland has also been contacted. Later, the video shows Senate Republican Leader Mitch McConnell and other GOP leaders as the group asks the Defense Department for help.

“They’re breaking the law in many different ways,” Pelosi says at one point. “And quite frankly, much of it at the instigation of the president of the United States.”

The footage also portrays Vice President Mike Pence — not Trump — stepping in to help calm the violence, telling Pelosi and the others he has spoken with Capitol Police, as Congress plans to resume its session that night to certify Biden’s election. The video was from Pelosi’s daughter, Alexandra, a documentary filmmaker.

In never-before-seen Secret Service messages, the panel produced evidence that extremist groups provided the muscle in the fight for Trump’s presidency, planning weeks before the attack to send a violent force to Washington.

The Secret Service warned in a Dec. 26, 2020, email of a tip that members of the right-wing Proud Boys planned to outnumber the police in a march in Washington on Jan. 6. “It felt like the calm before the storm,” one Secret Service agent wrote in a group chat. 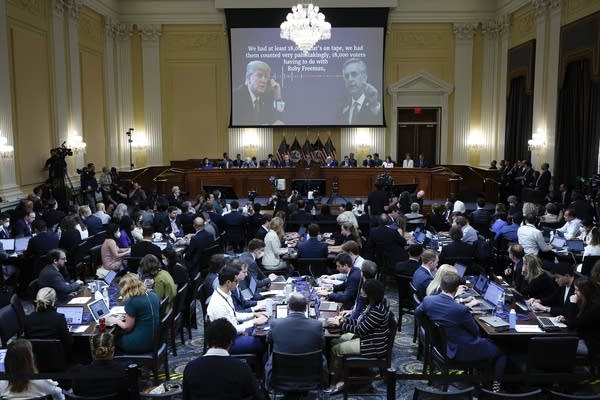 The committee argued in its final hearing before the midterm elections that Trump was directly involved in the bid to overturn the 2020 election, with the panel presenting new evidence that Trump knew he had lost but had a plan to declare victory no matter the election result. The panel also showed previously unseen footage of congressional leaders taking refuge amid the violence as the panel detailed Trump’s inaction during the attack. The committee is now working to present a final report by the end of the year on whether to make any criminal referrals to the Justice Department.

“I think they were trying to hand the Justice Department all the evidence on a silver platter,” said Ryan Goodman, co-director of the Reiss Center on Law and Security at the New York University School of Law.

“I do think that it’s very significant information for a Justice Department with much more powerful tools to pursue a full-blown investigation. I do think that they did a very good job of handing that off, and, in a certain sense, showing what a closing argument can look like in a powerful way.”

Rep. Liz Cheney (R-Wyo.) the committee’s vice chairwoman, noted that while it was up to the Department of Justice to make prosecutorial calls, the panel “may ultimately decide to make a series of criminal referrals” to them.

“We have sufficient information to consider criminal referrals for multiple individuals and to recommend a range of legislative proposals to guard against another Jan. 6,” she said.

While all prosecutions require demonstrating someone did something illegal, many of the crimes that would be the most likely fit for Trump’s behavior require an additional element of proving intent.

“Who in the White House or Trump world knew what and when — that may factor into investigative actions and possibly charging decisions on issues like seditious conspiracy, conspiracy to defraud the United States, having to do with the presentation of false slates of electors, conspiracies to obstruct an official proceeding,” Laufman added.

“Every piece of connective tissue that reaches Trump or people close to him with regard to those events is going to factor into investigative findings and recommendations by the line prosecutors on these cases.”

Amid its recap of what it laid out in its prior eight hearings, the panel offered new evidence that Trump acknowledged to aides that he lost the election and further details about the extent to which Trump allies discussed that he should claim victory before all the votes were counted.

During the hearing, the committee sought to show how much Trump was advised to claim he won the election, something he heard from confidants Roger Stone and Steve Bannon, and in a newly revealed email from conservative activist and Judicial Watch president Tom Fitton.

In the Oct. 31 email – sent four days before the election – Fitton included language encouraging Trump to say, “We had an election today — and I won.” The email also fixates on a faulty deadline, suggesting that Trump say “according to the ballots counted by the Election Day deadline.”

Election law requires counting all ballots, including absentee ballots, which are often counted after Election Day. Trump’s plan to claim victory came after he repeatedly urged his supporters to only vote in person.

Former Trump campaign manager Brad Parscale also told the committee Trump hatched plans to claim victory on election night as far back as July.  “The evidence presented yesterday was very compelling to show that the false claims of a stolen election were planned even before Election Day. That pre-meditation is very important to proving a conspiracy. The committee has certainly shown some evidence of a conspiracy to defraud the United States,” Barbara McQuade, a former U.S. Attorney, told the media,

The DOJ has assembled a grand jury to hear evidence related to efforts to overturn the 2020 election. The nod to the Department of Justice in the broader pitch for accountability for Trump comes from a panel whose members and staff are largely attorneys.

“On a day-to-day level [this investigation has] been conducted by former Department of Justice prosecutors. That has a lot to do with the professionalism and accomplishments of this investigation,” Laufman said.

“Among the best decisions that [Chairman] Bennie Thompson [D-Miss.] and Liz Cheney made was to facilitate the hiring of former prosecutors who, while dedicated to supporting the committee and its interests, surely, in the back of their minds, in the back of the Select Committee’s minds, are trying to ensure that everything they do could be a potential value to the Department of Justice, and from time to time to maybe gently put their finger in the department’s eyes to try to goad them into at least pursuing logical investigative steps to consider ultimately whether to bring charges against Trump.”