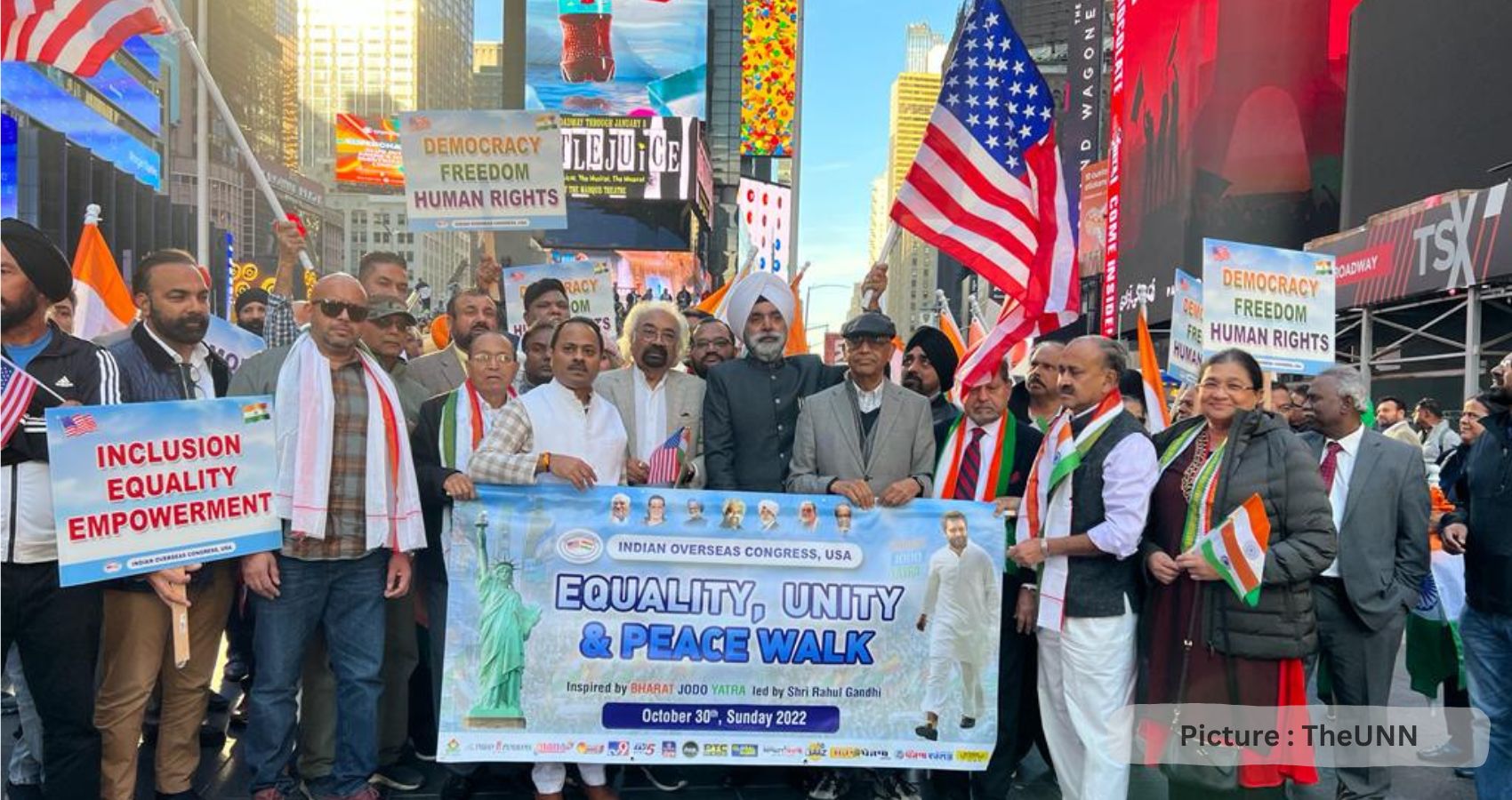 “A Unity Walk” in solidarity with Bharat Jodo Yatra of the Indian National Congress from Kanyakumari to Kashmir led by Shri Rahul Gandhi, was held at the iconic Times Square (47th St & Steps) to Union Square (Gandhi Statue) in New York City on Sunday, October 30th, 2022.

According to an IOC press release, about 300 members of the Indian diaspora took part in the ‘Unity Walk’ that began from Times Square on Sunday and walked up to the Gandhi statue in Union Square in downtown Manhattan.

The Pada Yatra is inspired by the “Bharat Jodo Yatra, currently being led by Rahul Gandhi” and “emphasizes unity and peace in India and the sub-continent.”

Indian Overseas Congress President Sam Pitroda flagged off the Ekta Pad Yatra from Times Square. At the conclusion of the 2.5 kilometer padyatra, a wreath was laid at the statue of Mahatma Gandhi in Union Square.

In his remarks, Pitroda “urged India to continue to be led by the ideals of Mahatma Gandhi and respect the ideals of democracy, freedom, human rights, justice, equality, inclusion, and related values and wisdom outlined in the Indian Constitution,” the release added.

The Bharat Jodo Yatra led by Shri Rahul Gandhi will cover a distance of around 3500 kms and go through about 12 states and 2 Union Territories. It will be a padayatra throughout. The entire leadership and cadre of the Congress party will participate in the Yatra. Many other yatras will join the main padayatra from across the length and breadth of the country.


After 75 years of independence, the Indian National Congress pays rich tributes to all those who fought for India’s freedom, those who defeated the politics of divide and rule, those who came together to give the country its great Constitution, and those who put India on the path of progress, prosperity, social justice and harmony.

Today, as the politics of hate is being practiced by those who never took part in our country’s freedom movement, and whose ideologies resulted in the assassination of the Father of the Nation, the Bharat Jodo Yatra has been launched as a nation-wide movement to unite;