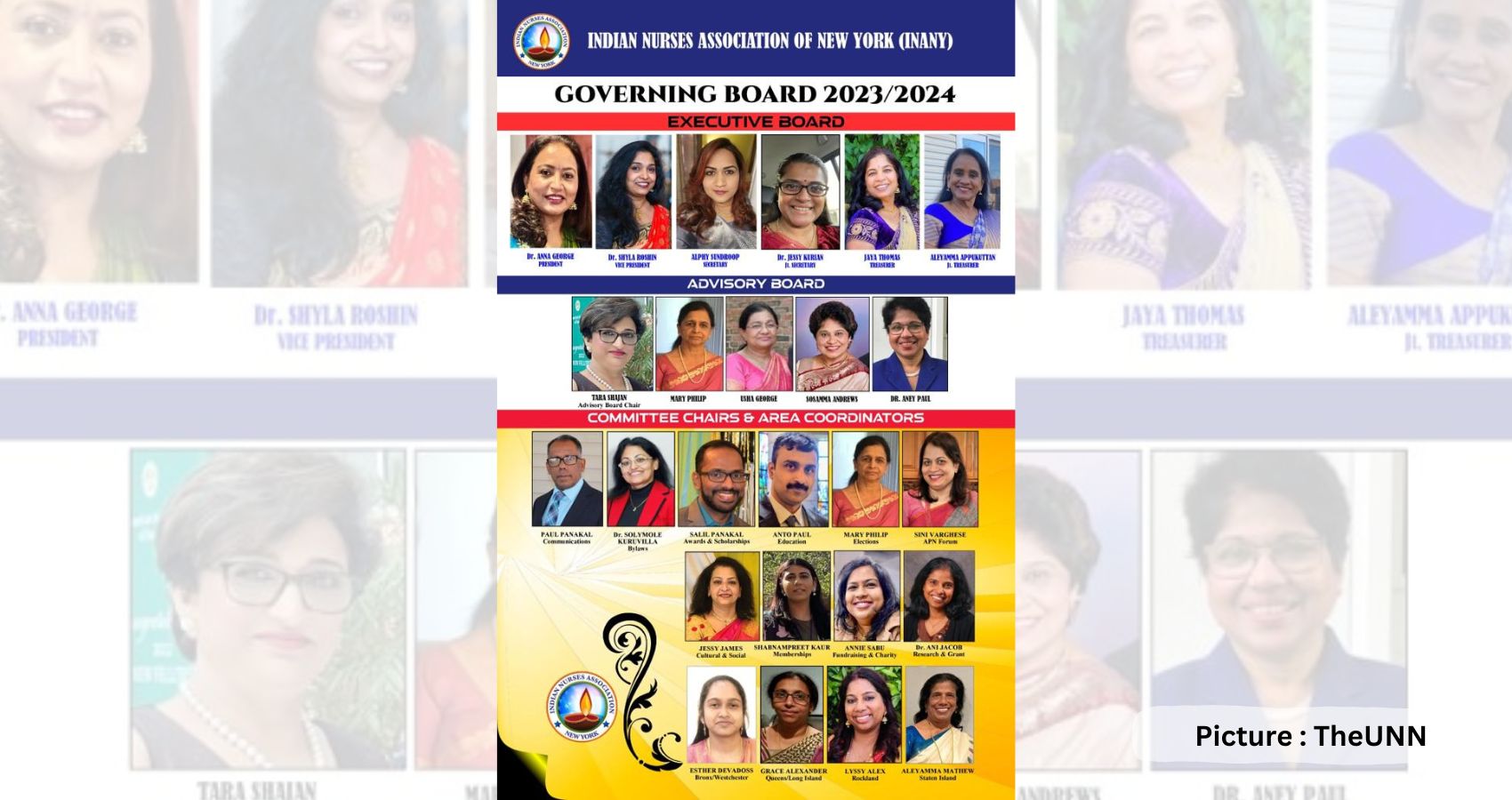 Tyson Center in Floral Park, New York witnessed the colorful installation of the incoming governing board of Indian Nurses Association of New York (INANY) for the term 2023-24 in the presence of members of INANY, their families, community leaders and elected Indian American officials.

The executive board and the advisory board lighted the lamp and received Proclamation from Senator Keven Thomas, the only Indian American Senator in New York State senate.

The only Asian elected to New York State senate from district 6 in Long Island was eloquent of his own familiarity with the activities that INANY serves.  He expressed his gratitude of what INANY did for outreach to the underserved individuals and families in his constituency by organizing and conducting health fair and blood drive for the community.  He promised that he would continue to advocate for the nurses who he said, are the people working very hard in hospitals and nursing homes. Tara Shajan, the chair of the advisory board introduced and welcomes the senator.

The reelected president Dr. Anna George was introduced and welcomes by her student Shabnampreet Kaur.  Dr. George showcased the contributions of INANY to the educational and professional development of nurses, for the mental health of nursing after the pandemic, involvement of the Association in the health of communities in need and the efforts to mitigate the surge of anti-Asian hate incidents since the beginning of COVID-19.

Suja Thomas, the incoming president of National Association of Indian Nurses of America was a keynote speaker.  She was introduced by Anto Paul.  Suja expressed her gratitude for INANY’s professional and social initiatives for health and healthcare both within and outside of the communities.  She, as the leader of the national association, offered and requested support.

Honorable Dr. Aney Paul who took the lead in forming INANY and was the founding president, continues to serve in its advisory board.  As the first Indian nurse ever elected in the United States as a legislator, she always stood for the welfare of nurses and also initiated health related legislations in her county of Rockland.  She currently serves as the vice chair of Rockland County legislature.  She talked about how gratified and happy she was being part of INANY and being experiencing the good things INANY does for both nurses and the society at large.

Honorable Ragini Srivastava, the recently elected Town Clerk of North Hempstead was introduced by INANY’s outgoing vice president Dr. Solymole Kuruvilla.  Ms. Srivastava who immigrated to the US from India became a successful business woman and rose to become the first Indian American Town Clerk in Long Island.  Ms. Srivastava spoke highly of INANY and the leadership’s concern for the poor and the underserved community.  She praised and thanked the constantly compassionate and empathetic care the Indian nurses in the area provide thousands and thousands of persons and their resiliency they evidenced especially during the pandemic.